Accessibility links
U.S. Rejects China's Claims Over South China Sea China claims sovereignty over the vast majority of the economically important body of water, and in recent years, it has built artificial islands to bolster those claims. 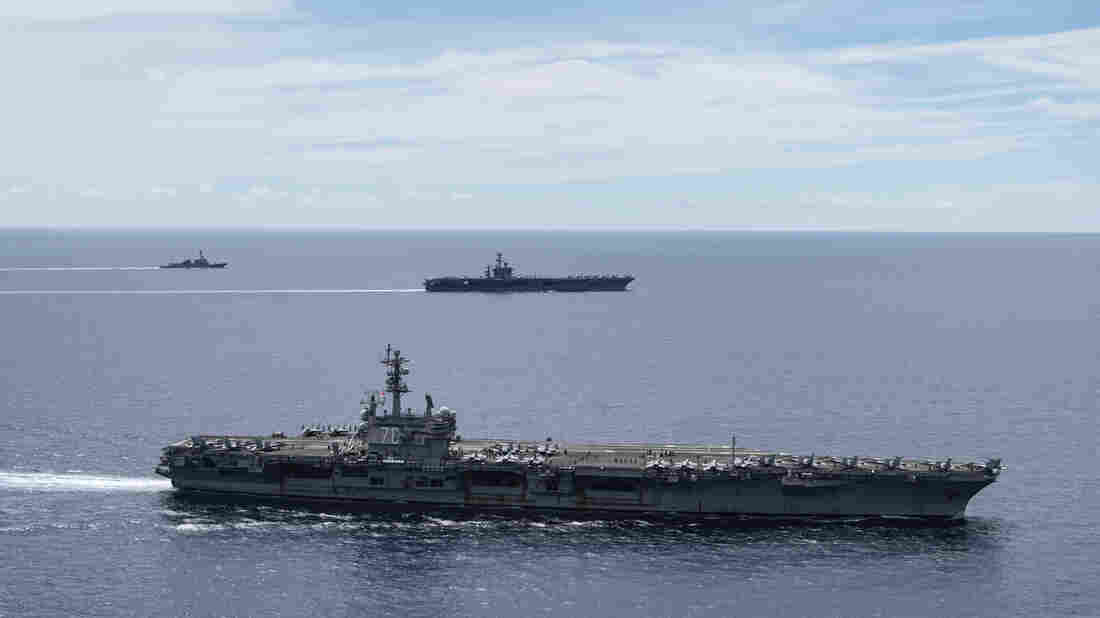 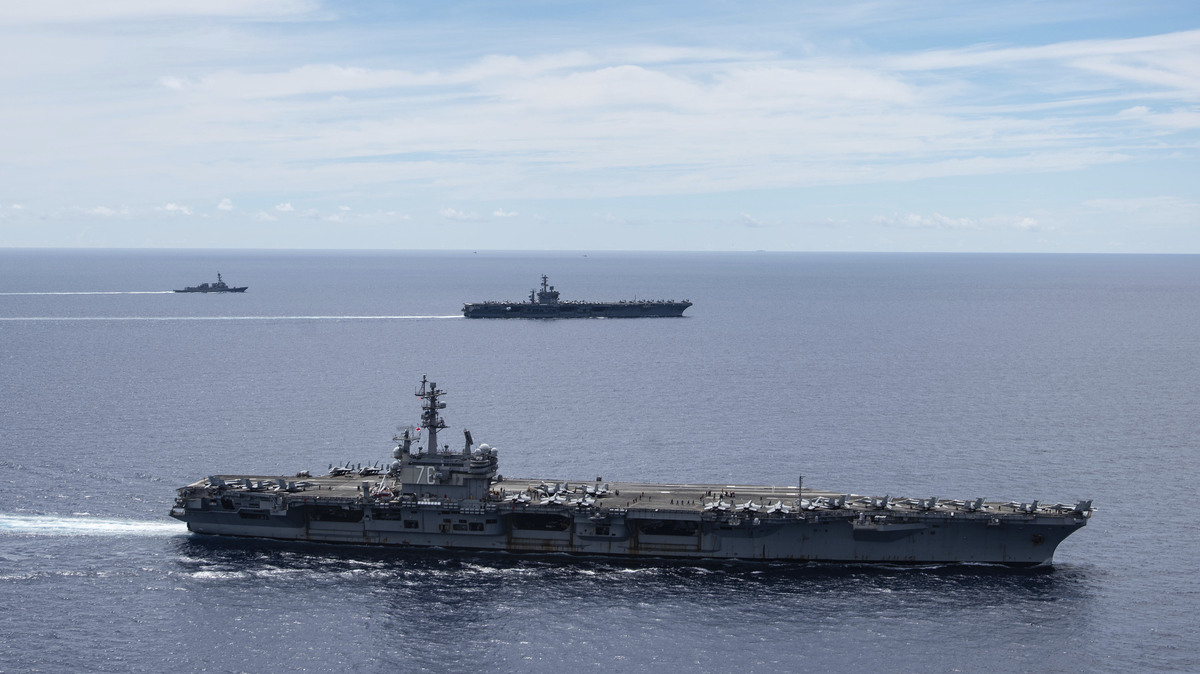 The USS Ronald Reagan (foreground) and the USS Nimitz Carrier Strike Groups sail together in formation in the South China Sea on July 6. China has accused the U.S. of flexing its military muscles by conducting joint exercises with two U.S. aircraft carrier groups in the strategic waterway.

The Trump administration on Monday rejected Beijing's maritime claims in the South China Sea, wading into a conflict that has pitted China against several Southeast Asian countries with competing claims at a time of already-strained relations between Washington and Beijing.

In a statement, Secretary of State Mike Pompeo said the move was intended to strengthen U.S. policy "in a vital, contentious" region.

"We are making clear: Beijing's claims to offshore resources across most of the South China Sea are completely unlawful, as is its campaign of bullying to control them," Pompeo said.

China claims sovereignty over the majority of the vast and economically important Asian waterway, and in recent years has built artificial islands or expanded existing islands to bolster its claims. It has also built air strips, docks and military facilities on some South China Sea islands and asserted its broad maritime claims with coast guard ships far from Chinese shores.

Beijing's territorial claims are depicted on Chinese maps with the so-called Nine-Dash Line, a sweeping downward arc that encompasses most of the South China Sea.

Others with claims in the South China Sea — including Vietnam, Malaysia, the Philippines, Taiwan and Brunei — have rejected China's assertions. In 2016, an international tribunal in The Hague ruled that China's claim to sovereignty along the Nine-Dash Line had no legal basis in international law. Beijing rejected that ruling, saying the tribunal had no jurisdiction.

Until now, U.S. policy on maritime claims in the South China Sea has been left largely unarticulated, though the U.S. Navy has ramped up what it calls "freedom of navigation" operations near Chinese-occupied features to remind Beijing that the U.S. has an interest in keeping sea lanes open.

Earlier this month, two U.S. aircraft carriers conducted exercises in the South China Sea "in support of a free and open Indo-Pacific", the Navy said, as China's military conducted drills near the Paracel Islands — one of the disputed island chains.

The U.S. statement on Monday explicitly backed the findings of the 2016 tribunal case, which was brought by the Philippines.

"The PRC has no legal grounds to unilaterally impose its will on the region," it said, referring to the People's Republic of China (PRC).

"Beijing uses intimidation to undermine the sovereign rights of Southeast Asian coastal states in the South China Sea, bully them out of offshore resources, assert unilateral dominion, and replace international law with 'might makes right,' " the statement said.

A spokesperson for China's embassy in Washington said China was "firmly opposed" to the U.S. statement on its South China Sea policy.

"The United States is not a country directly involved in the disputes. However, it has kept interfering in the issue. Under the pretext of preserving stability, it is flexing muscles, stirring up tension and inciting confrontation in the region," it said.

"We advise the U.S. side to earnestly honor its commitment of not taking sides on the issue of territorial sovereignty, respect regional countries' efforts for a peaceful and stable South China Sea and stop its attempts to disrupt and sabotage regional peace and stability."

The United States has remained neutral on territorial claims — who has sovereignty over what islands — in the South China Sea, and the statement on Monday does not appear to change that policy.

"This statement is making clear that we can be neutral on the islands [but] we are not neutral on the waters," said Gregory Poling, a South China Sea expert at the Center for Strategic and International Studies.

If the U.S. stance can garner international support, he said, it could put China in an awkward position.

Pompeo's statement said the U.S. rejected Chinese claims to waters beyond a 12-nautical mile territorial sea derived from islands it claims in the Spratly Islands, an archipelago between Vietnam and the Philippines. The U.S. also rejected Beijing's claim to James Shoal, a submerged feature it said is some 50 nautical miles from Malaysia.

"Any PRC action to harass other states' fishing or hydrocarbon development in these waters — or to carry out such activities unilaterally — is unlawful," it read. "The world will not allow Beijing to treat the South China Sea as its maritime empire."