Accessibility links
Federal Government Executes First Person in 17 Years Daniel Lee, 47, was put to death on Tuesday morning in the federal death chamber in the first federal execution since 2003. Other inmates are scheduled for death this week. 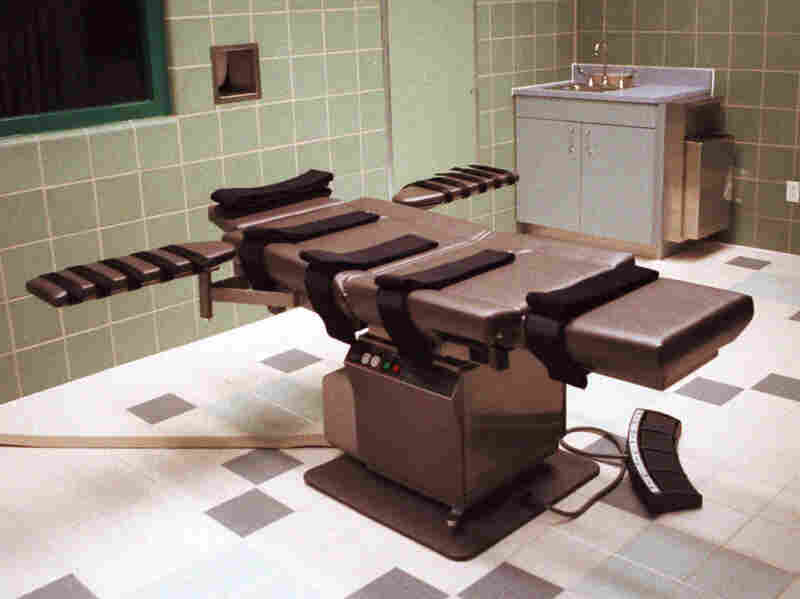 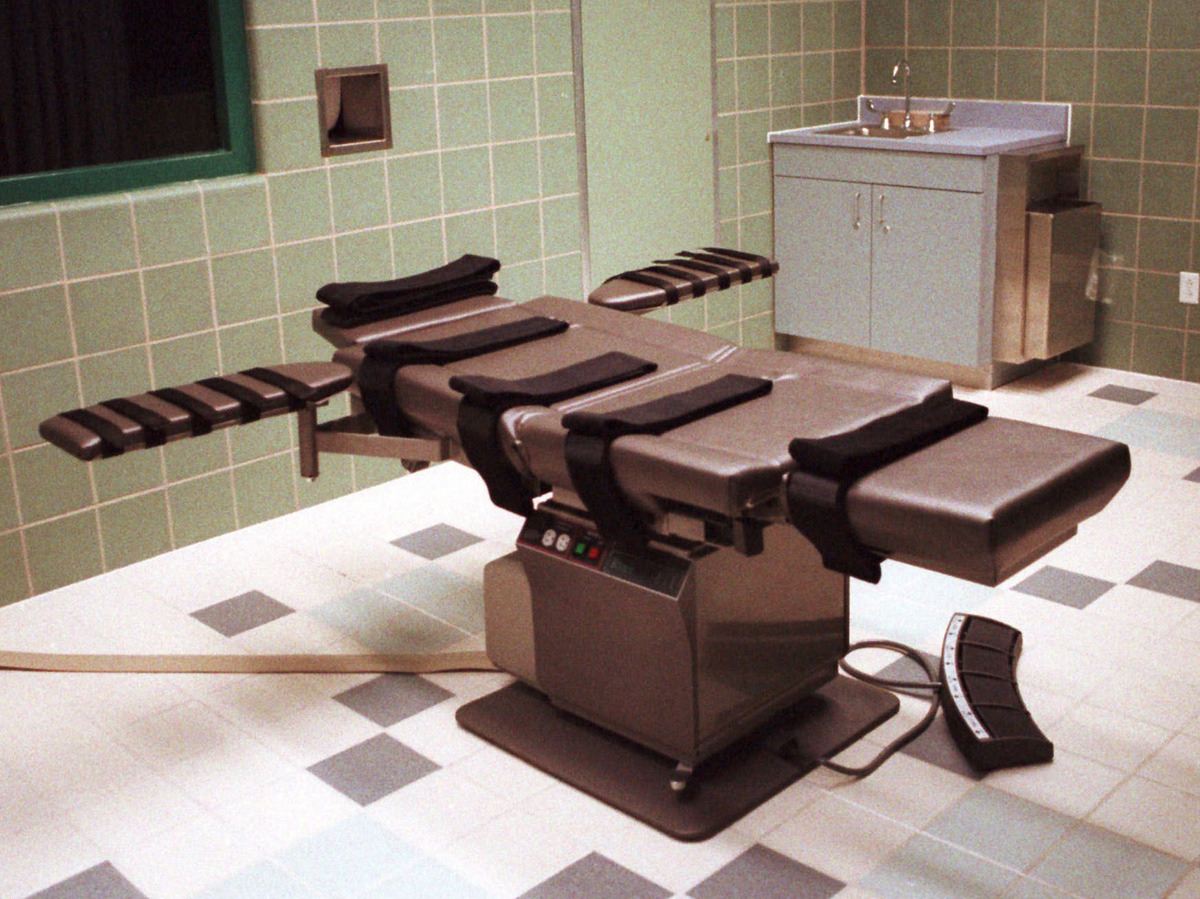 Daniel Lee's last words from the death chamber in Terre Haute, Ind., were, "You're killing an innocent man."

The Justice Department has put to death Daniel Lee, 47, marking the first federal execution since 2003, after a chaotic overnight series of court rulings.

Lee had been convicted of killing three people, including a child, as part of a broader racketeering scheme to fund a white supremacist cause. He had waited more than 20 years on federal death row in Terre Haute, Ind.

Lee, strapped to a gurney and connected to an IV in his left arm, said: "I didn't do it. I've made a lot of mistakes in my life but I'm not a murderer," according to a pool report from the prison.

Lee blamed a judge in Arkansas for ignoring DNA evidence in his case and said he was on the other side of the country when the killings happened. He said at one point, "I bear no responsibility" for the murders in his case, according to the pool report.

Lee's last words were, "You're killing an innocent man."

As a senior Bureau of Prisons official told Lee that he was being put to death, the condemned man shook his head, according to the pool report.

A U.S. marshal lifted a black telephone inside the execution room — a small square room with green tiles and windows looking at the witness' rooms, where observers were able to see what was taking place — and asked whether there was anything to impede the execution. He said there was not and the execution could proceed.

A statement by the Bureau of Prisons following the execution described the gruesome 1996 murders of William Frederick Mueller and Nancy Ann Mueller and their 8-year-old daughter, Sarah Elizabeth Powell, and recounted Lee's 1999 conviction by a jury in the case.

Ruth Friedman, Lee's lawyer, criticized what she called the "shameful" process that led up to Lee's death. The prisoner was taken to the death chamber in the dark of night and kept in place even as the final legal obstacles were resolved, she said.

"Over the four hours it took for this reckless and relentless government to pursue these ends, Daniel Lewis Lee remained strapped to a gurney," Friedman said in a statement. "A mere 31 minutes after a court of appeals lifted the last impediment to his execution at the federal government's urging, while multiple motions remained pending, and without notice to counsel, he was executed." 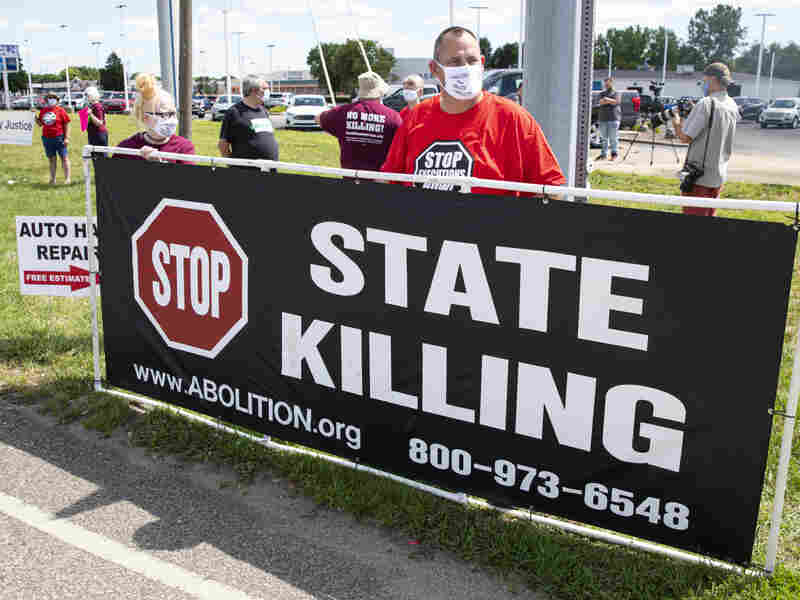 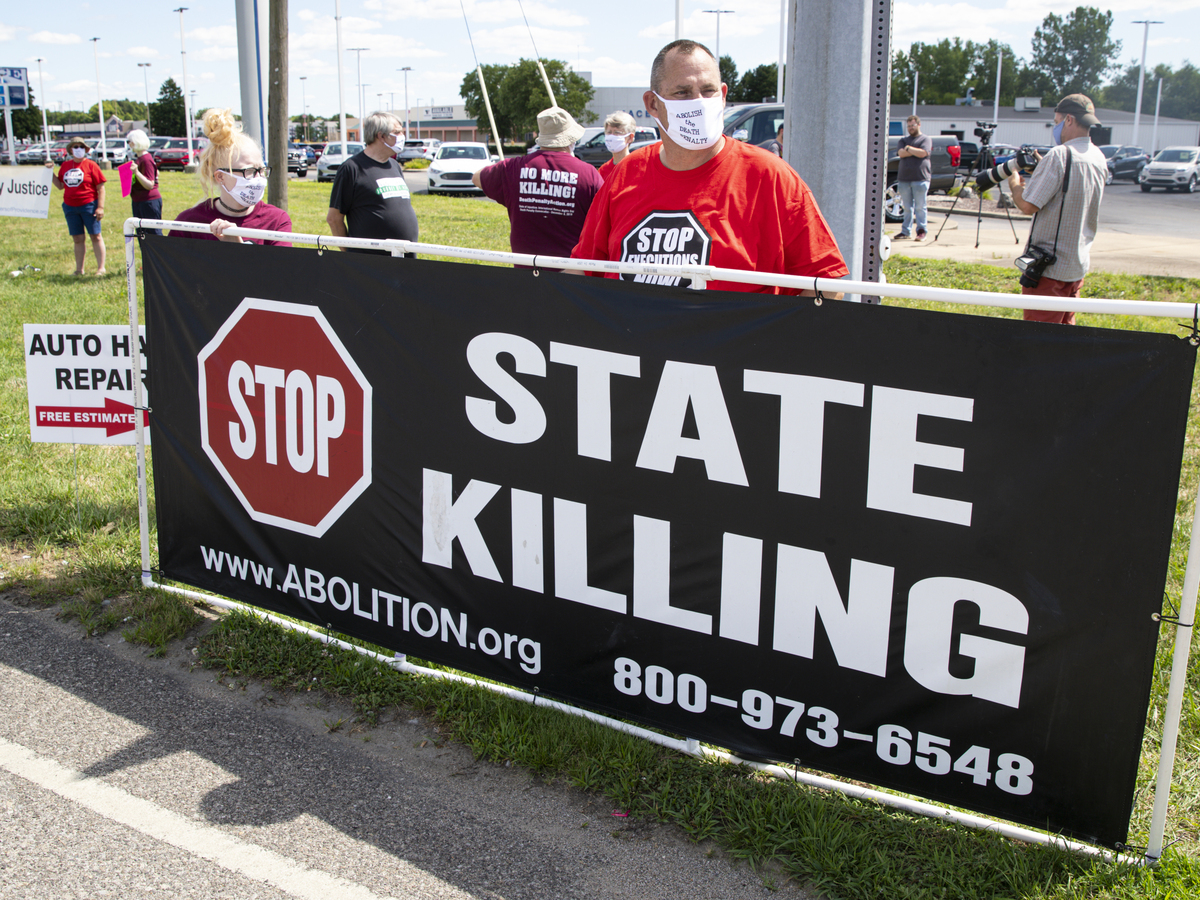 Protesters against the death penalty gather in Terre Haute, Ind., on Monday. Daniel Lee, a convicted killer, was executed the following morning after court rulings cleared the way.

Attorney General William Barr used a statement later on Tuesday to repeat the details in Lee's case and state that, in Barr's view, the story has a fit conclusion.

"Today, Lee finally faced the justice he deserved," Barr said. "The American people have made the considered choice to permit capital punishment for the most egregious federal crimes, and justice was done today in implementing the sentence for Lee's horrific offenses."

The execution followed an early morning 5-4 decision by the U.S. Supreme Court, which rejected a challenge to the single-drug protocol authorities used in the lethal injection.

Chief Justice John Roberts concluded Lee and other men on death row had virtually no chance of succeeding in their claim that pentobarbital injections amounted to cruel and unusual punishment under the 8th Amendment.

Roberts said that five states use pentobarbital in their execution protocols and that about 100 death sentences already had been carried out with that method.

Presidents Do Not Have Absolute Immunity, Supreme Court Rules

The high court's four liberal justices dissented. Stephen Breyer raised doubts about the constitutionality of capital punishment, pointing out that Lee's co-defendant, considered more culpable in the murders, had received a life sentence.

Justice Sonia Sotomayor decried the rush to execute Lee, rather than build a fuller record in the lower courts. The federal appeals court in Washington, D.C., had earlier agreed to expedite proceedings there over the lethal injection process.

"In its hurry to resolve the government's emergency motions, I fear the court has overlooked not only its prior ruling, but also its role in safeguarding robust
federal judicial review," Sotomayor wrote.

The Supreme Court also refused to consider a claim by Earlene Peterson, 81, a relative of Lee's victims, who had asked the Bureau of Prisons to delay the execution, citing the coronavirus pandemic. She and other family members had appealed to Attorney General William Barr and President Trump to commute Lee's sentence to life in prison.