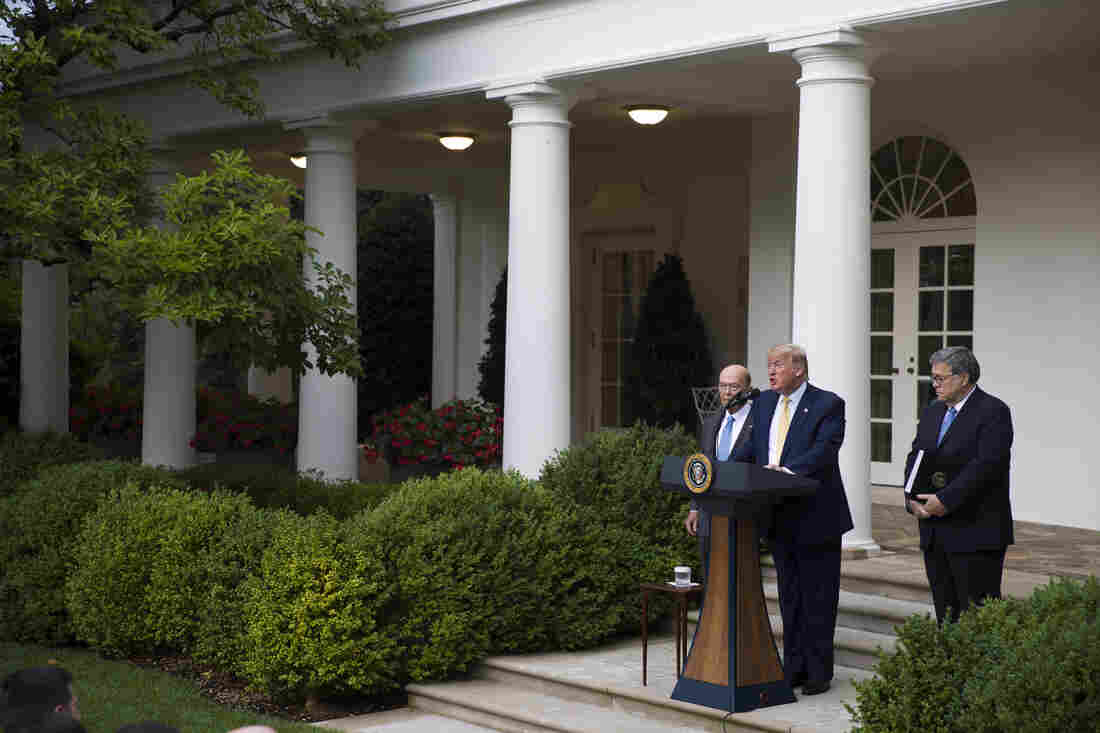 To help figure out the U.S. citizenship status of every adult living in the country, the Trump administration has made agreements to accumulate driver's license and state identification card information from states including Iowa, Nebraska, South Carolina and South Dakota, NPR has learned.

In the past year since the administration failed in its attempt to add the now-blocked citizenship question to 2020 census forms, the Census Bureau has been gathering state and federal records to produce anonymized citizenship data under directives from Commerce Secretary Wilbur Ross, who oversees the bureau, and an executive order Trump issued in July 2019.

In November, Nebraska became the first state to voluntarily agree to transfer data from its state driver's license and state ID records to the U.S. Census Bureau, as NPR reported last year.

The bureau entered into a data-sharing arrangement with the Iowa Department of Transportation in March, both government agencies confirmed to NPR in statements on Wednesday. Iowa is not sharing citizenship information, but it has agreed to share the names, addresses and dates of birth of driver's license and state ID cardholders from 2019 through 2024, according to a copy of the agreement NPR obtained from the department.

In April, South Dakota Public Safety Secretary Craig Price — who was appointed to President Trump's commission on law enforcement this year — signed an agreement to share information from driver's licenses and state ID cards with the bureau, according to a copy of the memorandum of understanding the state's Department of Public Safety provided to NPR.

A copy of an agreement provided to NPR by the South Carolina Department of Motor Vehicles shows the DMV formally agreed this month to transfer data about state driver's license and state ID cardholders from 2018 through March 2020.

The Census Bureau's public information office has not responded to NPR's question about whether it is currently in discussions with any other states about data-sharing agreements.

NPR previously reported that the Department of Homeland Security quietly announced last year in a regulatory document that it had agreed, despite internal concerns, to share certain records — including some from Immigration and Customs Enforcement — for the administration's efforts to determine the number of citizens, unauthorized immigrants and other noncitizens in the country.

In addition to allowing states to redistrict using the number of citizens old enough to vote, Trump's executive order noted that the citizenship data could assist the government in generating a "more reliable count of the unauthorized alien population in the country."

The arrangements with South Carolina, South Dakota, Iowa and Nebraska are not expected to involve information about unauthorized immigrants. All four states require applicants for driver's licenses and state ID cards to provide proof that they are legally residing in the country.

Some states have publicly refused to hand over data.

New Hampshire and Pennsylvania were among the states that received requests from the bureau. But the Pennsylvania Department of Transportation sent a letter to the bureau in October denying the request because it felt that doing so was in "the best interest of the citizens of the commonwealth," Alexis Campbell, a spokesperson for the department, tells NPR. New Hampshire Department of Safety spokesperson Paul Raymond Jr. says in an email that state law "prohibits the DMV from fulfilling the request."

Andrea Henry, a spokesperson for the Iowa Department of Transportation, tells NPR in a statement that federal and state laws allow the department to release the information to the federal government when it is used to "carry out its official government purposes."

South Carolina Department of Motor Vehicles spokesperson Julie Roy says in an email that state and federal laws allow driver's license records that the state's DMV maintains to "be disclosed in certain conditions," including for carrying out "legitimate government agency functions."

Asked why the South Dakota Department of Public Safety decided to enter into its data-sharing agreement with the bureau, spokesperson Tony Mangan replied by email: "South Dakota's Driver Licensing program is authorized to share information for use by any government agency in carrying out its functions. Information was provided at the request of the U.S. Census Bureau to carry out its function."

"All data that the state program agency agrees to provide the Census Bureau remains confidential," South Dakota's agreement says, later specifying that the bureau can only use the information for "statistical purposes and not for program or administrative enforcement."

South Dakota has agreed to deliver monthly data about license and ID cardholders' citizenship status going back to 2018 and through the end of 2021.

Unlike in the agreement signed with the Nebraska Department of Motor Vehicles, the bureau does not ask South Dakota's driver licensing program for data about race. But it does request names, addresses, dates of birth, sex and eye color.

The bureau's researchers are relying on those details to help them match different government records about the same individual and try to come up with the most up-to-date citizenship status of every adult in the country. The Trump administration is counting on these efforts to produce anonymized citizenship data that are detailed down to the level of a census block.

Using that kind of information to exclude U.S. citizens under 18 and noncitizens — both those lawfully and unlawfully in the country — when redrawing districts would be "advantageous to Republicans and Non-Hispanic Whites," a GOP redistricting strategist concluded.

It is an open question whether redrawing voting maps based on the number of citizens old enough to vote instead of all residents, including children, is legal. That issue may be tested in the courts as early as next year, when the Census Bureau plans to release block-level citizenship data to the states by July 31, 2021, James Whitehorne, the head of the Census Bureau's redistricting and voting rights data office, confirmed in April.

Many voting rights advocates, however, are skeptical about the accuracy of data that would be generated from historical records that often contain out-of-date information, especially about whether a person is currently a U.S. citizen.

Attorneys with the Mexican American Legal Defense and Educational Fund and Asian Americans Advancing Justice - AAJC are representing Latinx community groups in Arizona and Texas in an ongoing federal lawsuit to try to stop the administration from releasing this kind of citizenship data. They're arguing the administration is trying to prevent Latinos, noncitizens and other immigrants from receiving their fair share in political representation.

Democrats in both the U.S. House and Senate have introduced numerous bills to try to stop the Trump administration from producing the citizenship data.

Last week, the House Appropriations Committee released a funding bill for the Census Bureau that would prevent those efforts from receiving new federal funds.