Accessibility links
Review: 'Asterix Omnibus Vol. 1' Europe's favorite cartoon Gaul has bopped plenty of Romans, but he's never really hit big in America. A rebooted version of Asterix, with a new translation from the French, is aimed at changing that.

With A Glug Of Potion And A New Translation, 'Asterix' Aims To Conquer America

With A Glug Of Potion And A New Translation, 'Asterix' Aims To Conquer America 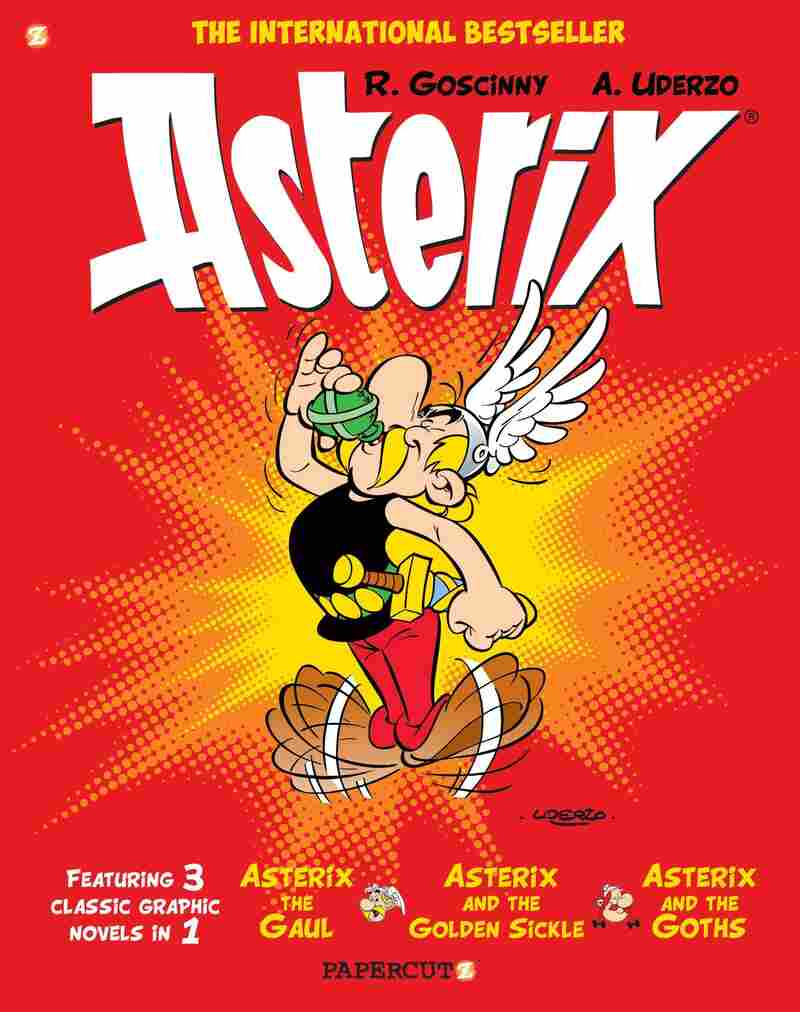 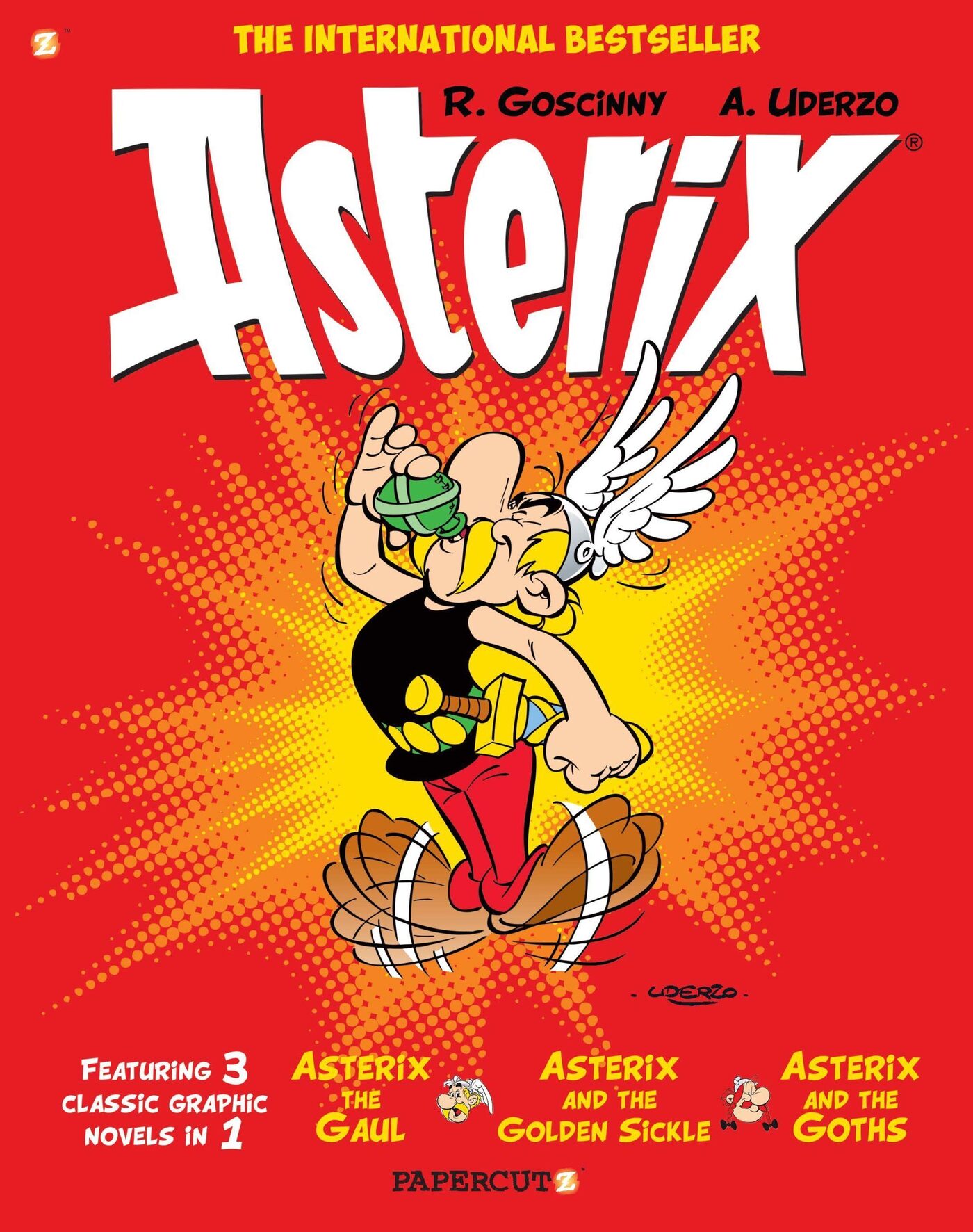 Asterix the Gaul, which kicks off the first volume of Papercutz' new Asterix reissues, doesn't feel like the genesis of an international juggernaut. Sure, the 1959 cartoon is funny: Diminutive-but-crafty Asterix and his towering sidekick Obelix are Laurel and Hardy transplanted to 50 B.C., delivering gonzo comeuppance to the Roman soldiers who hope to bring all of France under Caesar's rule. But nothing about René Goscinny's goofy narrative or Albert Uderzo's hyperactive, deliberately lowbrow drawings portend what the Asterix series became: a half-century-spanning, globally-bestselling, nation-defining phenomenon.

Asterix's enduring popularity has puzzled critics for decades, even as the series has racked up sales of 380 million books, been translated into 111 languages and spawned dozens of adaptations in various media. In France, Asterix is a treasured icon, the series' worldwide success a source of national pride. "Asterix is our ego," a Frenchwoman told The New York Times in 1996. When Uderzo passed away on March 24, President Emmanuel Macron's lengthy tribute conflated Asterix with "the French way of life" itself. Uderzo, Macron wrote, depicted "a world where the bounty of the word and table has pride of place, but so do solid values: altruism, faithful friendships, struggle and togetherness. His image of the Gallic banquet is its most dazzling portrait: fine food and beautiful union under infinite stars."

... though 'Asterix' has become a symbol of French authenticity, the series actually just as much a hybrid as its authors were ... It's a masterpiece of cross-cultural borrowing and reinvention.

You'd never know that Uderzo was the son of Italian immigrants or that Goscinny, a Jew whose parents were from Ukraine and Poland, grew up in Buenos Aires. In fact, though Asterix has become a symbol of French authenticity, the series is actually just as much a hybrid as its authors were. That's the real reason for its continuing appeal across decades and national boundaries: It's a masterpiece of cross-cultural borrowing and reinvention.

The series' spunky patriotism — with its stories about Gauls standing up to Roman invaders — is no accident, but was the result of careful calculation. In 1959, François Clauteaux, editor of the new youth magazine Pilote, was irked to see his kids reading piles of American comics. He asked Uderzo and Goscinny to create a comic that was definitively French, an aesthetic rebuttal to Disney-fied Yankee hegemony.

But even as the pair obliged, coming up with a story and characters inspired by the revered French hero Vercingetorix, they also took inspiration from the enemy. Uderzo, "suffused" with American comics from age 12 (as quoted in the Cartoon Journal's excellent March 27 tribute), had absorbed the styles of Disney greats Floyd Gottfredson and Carl Barks as well as Al Capp, E.C. Segar and Milton Caniff. Even the French cartoonist whom Uderzo most idolized, Edmond-François Calvo, himself emulated Burne Hogarth and Alex Raymond (known for Tarzan and Flash Gordon, respectively) and was called "the French Walt Disney" because he used anthropomorphic animals in his work.

Calvo, whom Uderzo worked with while still in his teens, laid the foundation for Asterix in other ways, too. His best-known creation, 1944's La Bête est Morte (The Beast is Dead), was a redemptive retelling of World War II that portrayed French citizens as rabbits and squirrels menaced by various evil outsiders: German wolves, Italian hyenas and Japanese monkeys. Fifteen years later, his onetime apprentice helped craft a fresh variation on the postwar French myth of invasion and resistance. Uderzo did so by appropriating the weapons of a new set of invaders, transforming American cartoon styles and tropes into something uniquely his own. Asterix, in turn, became a sort of global invader himself, carrying fables of France's heroic history to countries all over the world.

America, oddly enough, has been something of a holdout. Though Papercutz publisher Terry Nantier estimates that about 100,000 Asterix books are sold here every year, in 2015 the Daily Beast reported that the series' most recent title (then the top-selling book on Amazon.fr) came in a pitiful 4,917th on Amazon.com. Nantier says he thinks part of the problem may be linguistic: Up to now, the only English editions available were the work of British translators Anthea Bell and Derek Hockridge. Though those books are beloved by many, they're decidedly English in tone. Nantier is betting that looser, more Americanized language will attract readers in the burgeoning middle-grade market, so Papercutz is reissuing the entire series in new translations by Joe Johnson.

While grown-up American fans may want to stick with their Bell-Hockridge editions, it's fascinating to watch Johnson engage anew with Goscinny's layered, punning humor.

While grown-up American fans may want to stick with their Bell-Hockridge editions, it's fascinating to watch Johnson engage anew with Goscinny's layered, punning humor. Many of Goscinny and Uderzo's jokes about the different accents and customs of Gauls, Goths and Romans are impossible to understand in English, but Johnson does a good job of indicating what's so funny about Uderzo's caricatures. Johnson has the characters speak in a slangy, casual way, making the most of Goscinny's ancient-modern juxtapositions.

Unfortunately, things get a bit too modern in a brand-new volume, The Chieftain's Daughter, which is full of lame attempts to appeal to 21st-century teens. But that's not Johnson's fault; blame the French hired-gun writers, brought in to keep a valuable franchise alive. (For the series at its best, stick to the books written by Goscinny himself before his death in 1977.) And there's nothing Johnson can do about the noxious stereotypes Uderzo employs in his depictions of Africans and other nonwhite races. It's ironic that a work so mischievously subversive and anti-imperialist should reinscribe stereotypes that are as hackneyed as they are offensive. For some parents that may be a reason to give the whole series a pass. But if you'd like to talk to your kids about where comic tropes come from, what they mean and what effects they have, Asterix is well worth talking about.