Accessibility links
Trump Overhauls Key Environmental Law To Speed Up Pipelines And Other Projects President Trump is making major changes to a bedrock environmental law that he says will help the economy. Critics say the move will sideline input from communities affected by polluting projects. 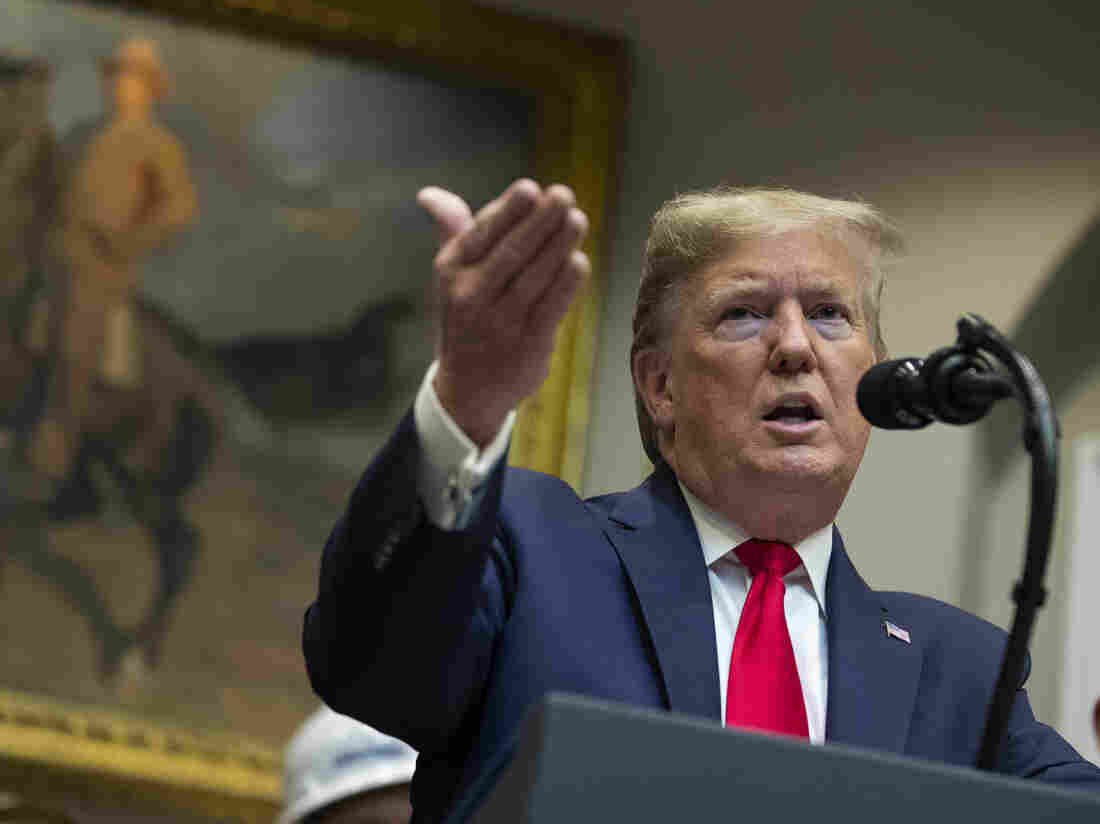 President Trump proposes changes to the National Environmental Policy Act at the White House in January. The final rules aims to speed approval of pipelines and other infrastructure. Evan Vucci/AP hide caption 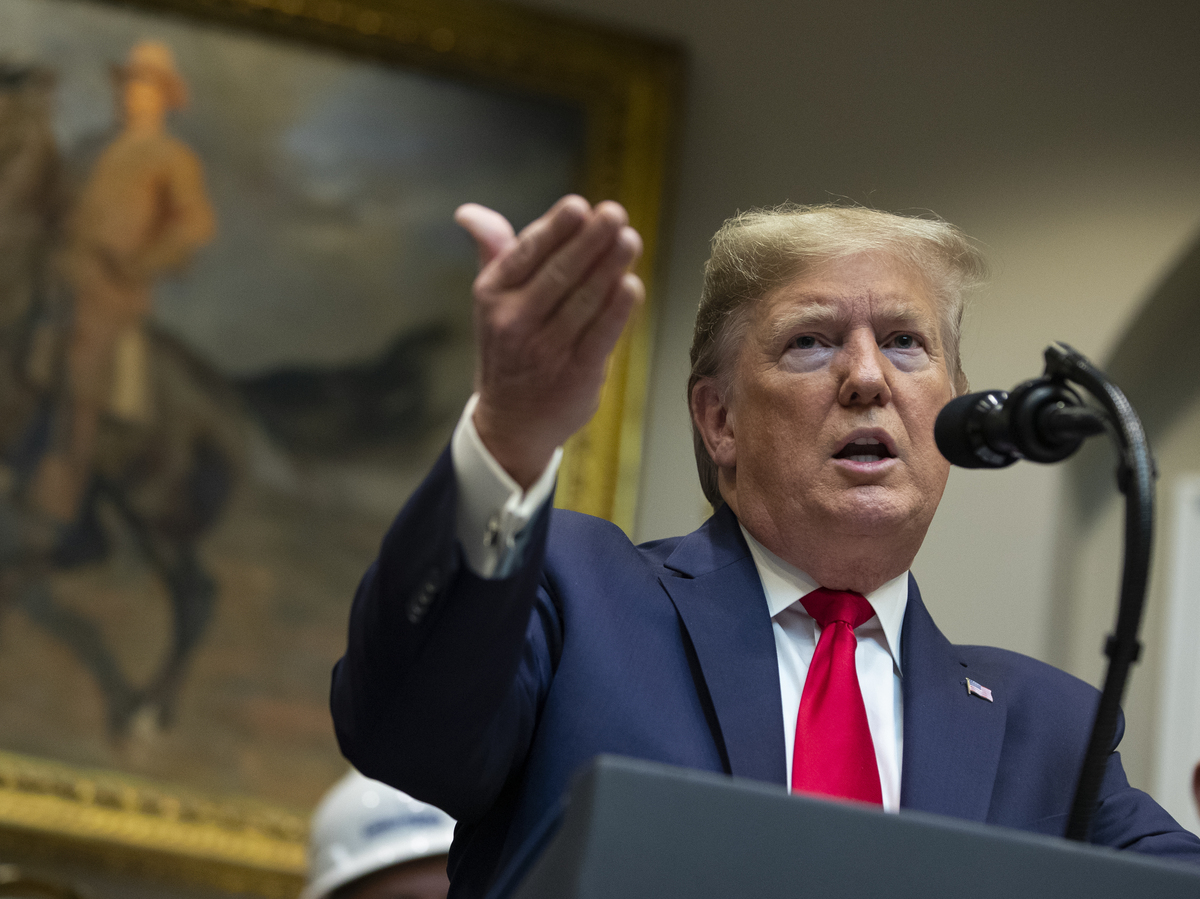 President Trump proposes changes to the National Environmental Policy Act at the White House in January. The final rules aims to speed approval of pipelines and other infrastructure.

In Atlanta today, President Trump announced a "top to bottom overhaul" of the regulations that govern one of the nation's most significant environmental laws. The aim is to speed up approval for major projects like pipelines and highways, but critics say it could sideline the concerns of poor and minority communities impacted by those projects, and discount their impact on climate change.

Speaking at a UPS facility, Trump decried the "mountains and mountains of bureaucratic red tape in Washington, D.C.," and recalled being frustrated by it as a builder in New York. He said one of the first projects to benefit from his streamlining would be the expansion of a freeway south of Atlanta.

"We are reclaiming America's proud heritage as a nation of builders and an nation that can get things done," he said.

The 50-year-old National Environmental Policy Act, or NEPA, was signed into law by President Richard Nixon. It requires federal agencies to consider the environmental effects of proposed projects before they are approved. It also gives the public and interest groups the ability to comment on those evaluations.

The administration's new regulations are expected to reduce the types and number of projects that will be subject to review under the NEPA, shorten the timeline for reviews, and drop a requirement that agencies consider the cumulative environmental effects of projects, such as their contribution to climate change.

The changes weaken a law that's played a major role in limiting the Trump administration's agenda of "energy dominance." In just the last week, environmental reviews have sidelined a series of controversial oil and gas pipeline projects, including the Keystone XL, the Dakota Access and the Atlantic Coast pipelines.

"What the Trump administration is doing is fundamentally changing those regulations and really gutting them," says Sharon Buccino, a senior attorney at the Natural Resources Defense Council.

What's more, Buccino says the law was designed to give a voice to communities long hurt by pollution from highways, pipelines and chemical plants that are disproportionately located in their neighborhoods.

"NEPA gives poor and communities of color a say in the projects that will define their communities for decades to come. Rather than listen, the Trump administration's plan aims to silence such voices," says Buccino.

Trump announced the proposed rules at the White House in January and said he wanted to streamline an "outrageously slow and burdensome federal approval process" that can delay major infrastructure projects for years. He said the country's infrastructure used to be the envy of the world but red tape has delayed projects making the U.S. "like a Third World country."

The average times for agencies to complete an environmental impact statement is currently 4 ½ years, says Mary Neumayr, chair of the White House Council on Environmental Quality. When the proposal was announced, she said this delay "deprives Americans of the benefits of modernized bridges and roads that enable them to get home to their families."

The American Petroleum Institute was among the industry groups that sent a letter to the administration last November urging the White House to streamline NEPA reviews.

"NEPA modernization will help America streamline permitting to move job-creating infrastructure projects off the drawing board and into development," says API President and CEO Mike Sommer.

The administration's rule changes set a strict two-year time limit for agencies to issue environmental impact statements. The new regulations also require comments be submitted more quickly, and limit the topics that can be covered in those comments.

Buccino and other environmental lawyers believe the new regulations are illegal and say they will be challenged in court. That means if Trump loses his reelection bid in November, it's likely the new rules would not take effect before he leaves office.

The presumptive Democratic presidential nominee Joe Biden has said he would reverse environmental rollbacks like this one. And he has set a very different tone from the Trump administration on environmental issues.

Biden outlined his climate change plan Tuesday, vowing to invest $2 trillion to boost clean energy and rebuild infrastructure. His plan includes environmental justice components with language that suggests he would reject Trump's NEPA regulations. One section reads, "Biden will ensure that frontline and fenceline communities are at the table when enforcement, remediation, and investment decisions affecting those communities are made."