Accessibility links
Cooking Chicken In A Pig's Bladder (It Sounds Better In French) With Bill Buford In his new memoir Dirt, chef Bill Buford recounts his experience working in Lyon, France. We met up over Zoom to make Poulet en Vessie -- chicken cooked in a pig's bladder. 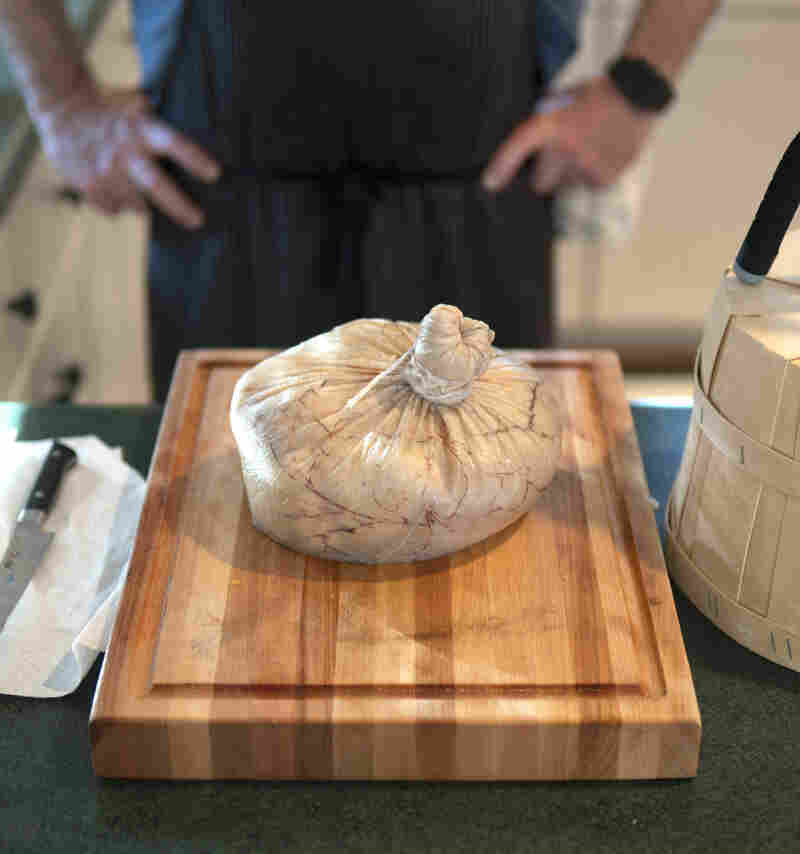 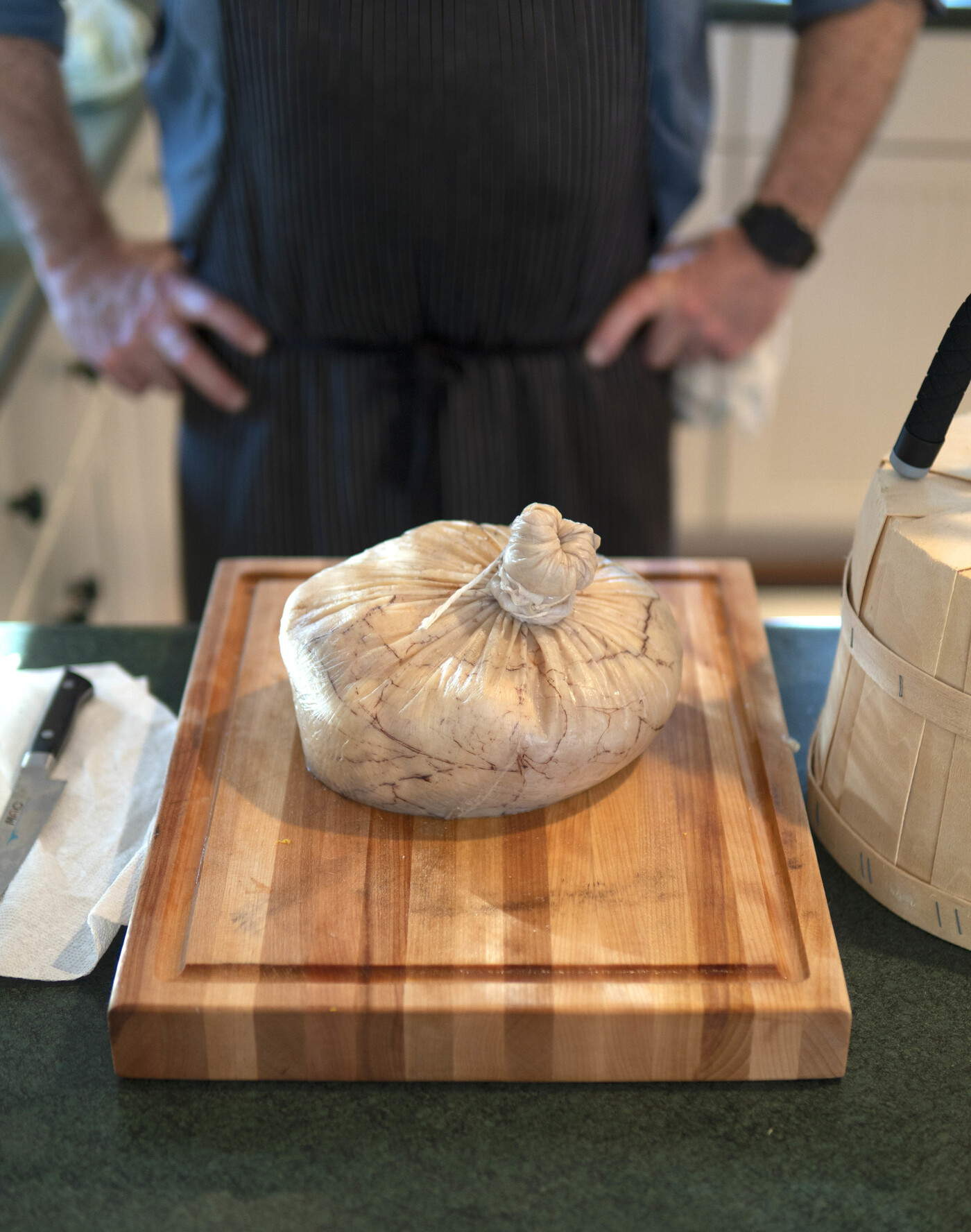 A few weeks ago, standing outside his New York City apartment building, Bill Buford handed me a bag. Inside was what looked like a deflated, veiny football, wrapped loosely in plastic. It was the dried-out bladder of a pig.

Buford was a little sketchy about the specifics, like who he got it from. "I think it arrived in a DHL parcel labeled 'Documents,'" he told me. I tried not to laugh as he evaded the details and then disappeared upstairs for more ingredients.

Buford has been a character in my head for years. (We'll get back to the pig bladder shortly, I promise.) He was an editor at prominent literary magazines. Then, in 2006 he wrote a book called Heat. It began as an assignment for The New Yorker where he apprenticed in a restaurant kitchen. Buford ended up quitting his magazine job to move to Italy to continue learning. For people who fantasized about doing something similar, Heat became a kind of Bible.

Now, 15 years later, the next chapter in Buford's story has arrived in his new memoir Dirt. In that decade and a half, Buford and his wife had twin boys. They'd planned to go to Lyon, France after their time in Italy, but with toddlers in tow, it took a while. Once there, they struggled to fit in. "Lyon is ... a big city but it's also very provincial. And they don't like outsiders," Buford said.

Eventually the family did find friends and Buford found culinary success in Lyon, first as a baker's apprentice, then in the kitchen of La Mère Brazier, one of the city's famous old restaurants. Buford learned about making fish quenelles, blood sausage and Poulet En Vessie, chicken cooked in — as promised — a pig's bladder.

That recipe seemed fun, and had a bit of a weird-factor that appealed to me, so I asked Buford if we could cook it together — or, as "together" as we could be in the midst of a global pandemic. (I cooked in my apartment in New York, and Buford cooked at his friend's place in Maine where he and his family had decamped after the bladder hand-off. ) 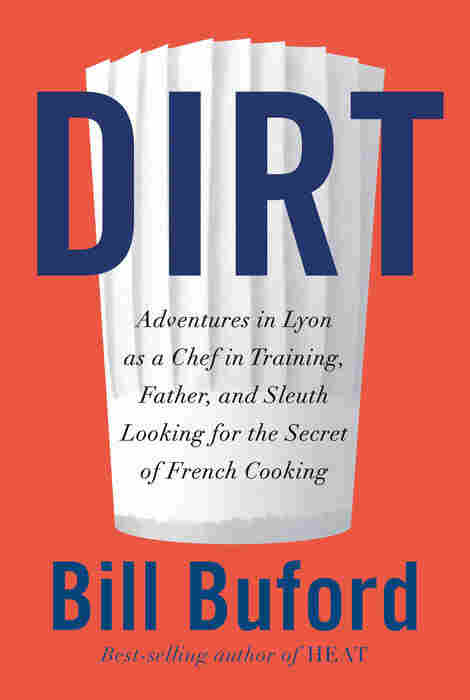 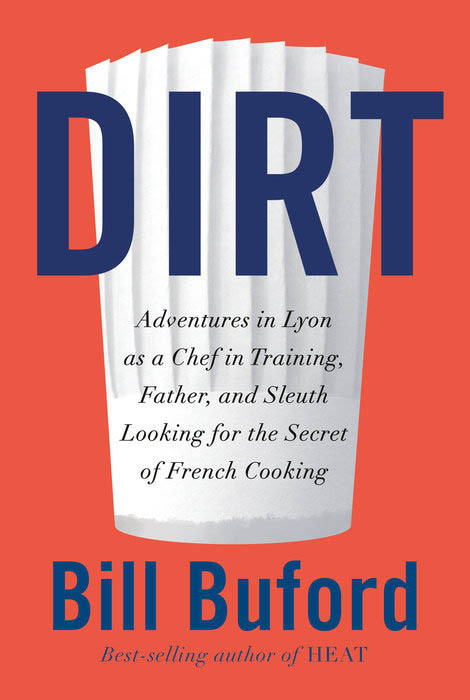 "You prepare your bird in the normal way you would for roasting," Buford explained to me over Zoom. "You put lots of goodies inside its cavity. We're putting foie gras, and wine and eaux de vie ... some people do port, some people do truffles under the skin."

Then the whole thing gets slipped into the bladder. This old technique is, "almost like an early practice of vacuum sealed cooking," Buford explained. "It's like sous vide cooking, but instead of having to use a fancy machine and special plastic bags to take the air out, you're using something that comes from an animal... It can produce really astonishing results of tenderness."

And it's economical, for Lyonnais farmers, it's important to use every part of an animal.

Buford got the training he was looking for in Lyon, but his experiences there were not all positive. He writes about getting bullied — badly — by a 19-year-old fellow cook. "It started with his, in effect making me stand in a corner," Buford told me, "and that was the beginning of a really ugly relationship." 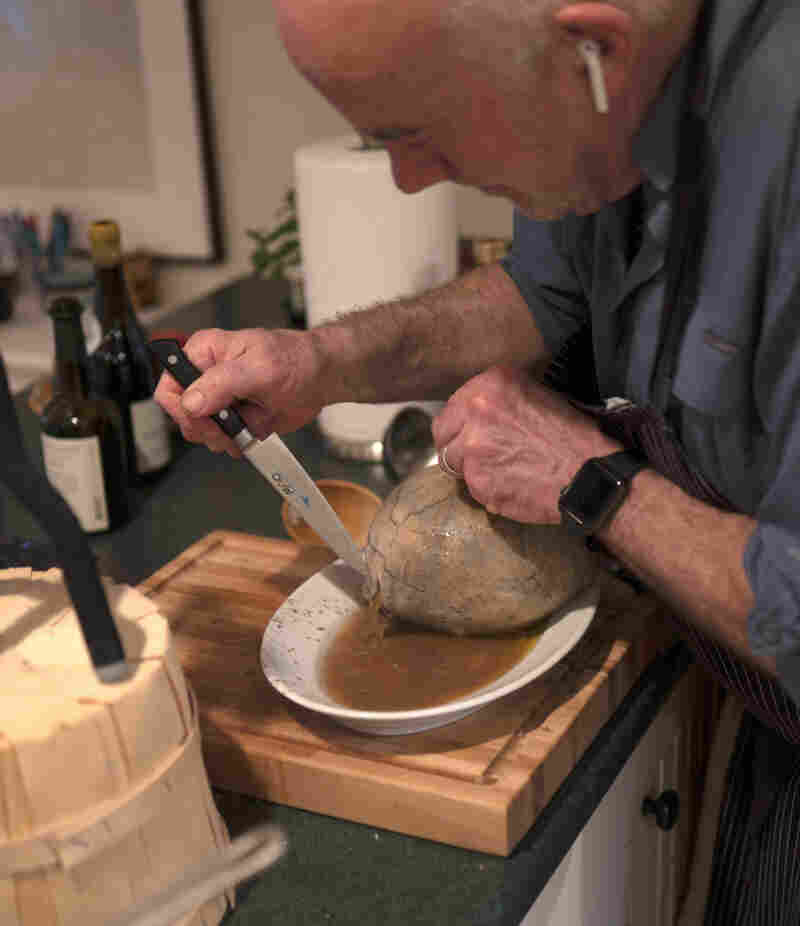 We stuffed the chickens inside the pig bladder, tied them up and set them afloat in a pot of boiling water, then sliced them open. George Buford hide caption 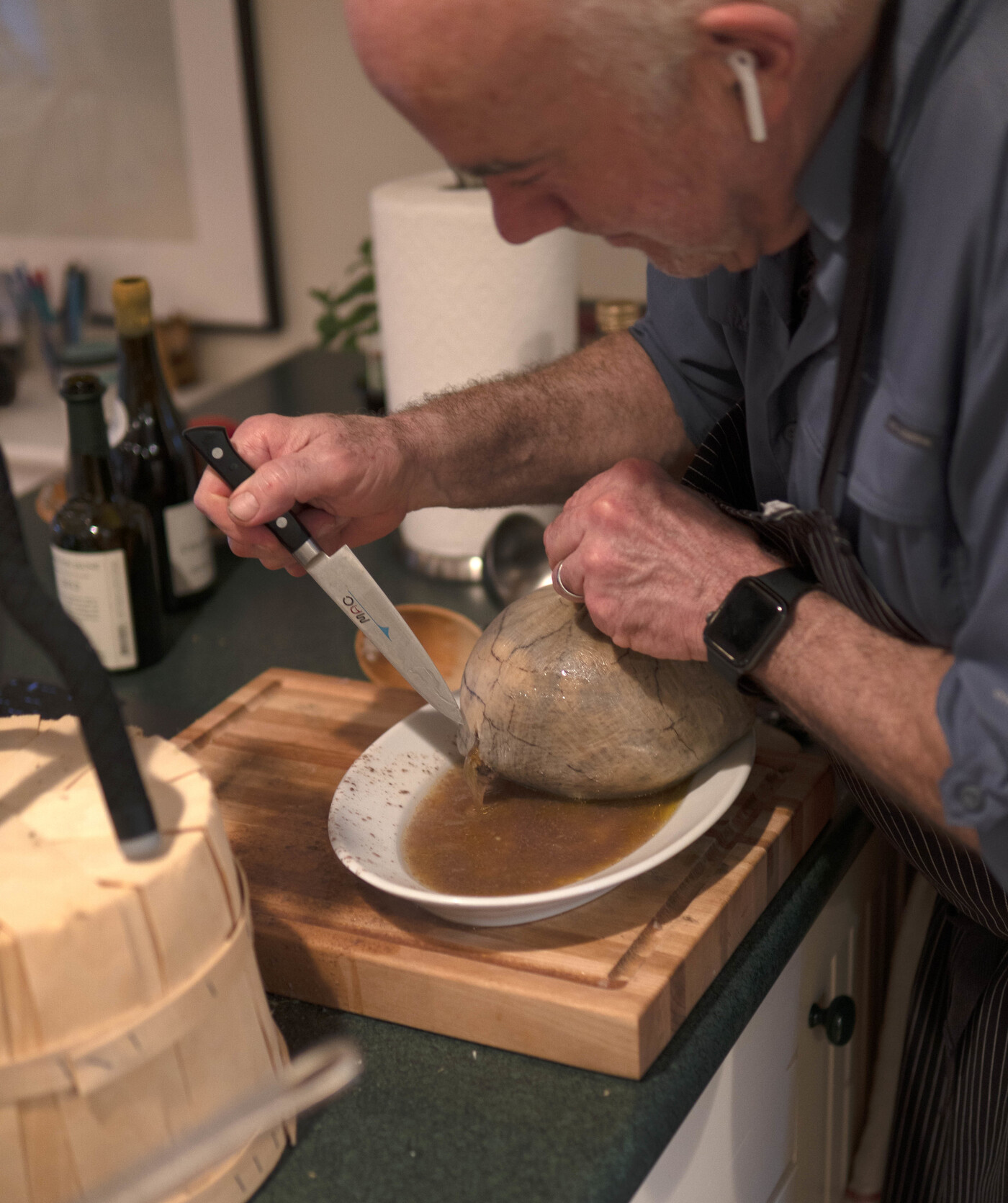 We stuffed the chickens inside the pig bladder, tied them up and set them afloat in a pot of boiling water, then sliced them open.

The bully ordered Buford around, sabotaged his dishes, hid pots and pans and stole ingredients from his station. Other people in the kitchen had it even worse: a young female cook angered the sous chef so much he threw pans at her head. Buford watched. He told me that whether it was because he was a journalist and there to observe, or because he was being hazed himself, he didn't intervene. "Here is an act of great brutality and bullying and immorality," he recalled. "And I didn't [intervene] and I regret that I didn't. It doesn't reflect well on me."

French kitchens are based on a system called the Brigade de cuisine, modeled after military hierarchy, which Buford says tolerates bullies. But he wasn't about to leave — he'd invested a lot in this adventure, and had a book to write. His kids were at the local public school. His wife, a wine expert, was working toward a degree. He had to stick it out. In the end, his bully quit the kitchen, and Buford "could feel comfortable again."

As we cooked, together but apart, Buford's family started migrating into his kitchen, gently poking fun at his French accent — the boys became fluent while they were there — and expressing a few misgivings about food cooked in a bladder. We both sliced them open. Mine squirted sauce all over me, and the counter. But when all was said and done, and the chicken on the table, everybody loved it. The stuff in the cavity had melded into a kind of ethereal sauce, and the meat was fabulously tender.

As we ended the call I could hear them laughing, finishing dinner. Buford told me later that writing this book was really "an excuse" to have a five-year-long adventure with his family. "It financially was insane," he told me. "But we wouldn't trade that experience in for anything."

Nina Gregory edited this story. Beth Novey produced it for the Web.

A previous version of this headline incorrectly stated the title of Bill Buford's new memoir. It is Dirt, not Heat.