Accessibility links
Kelly Loeffler-WNBA Controversy Grows Over Black Lives Matter "The truth is, we need less — not more politics in sports," wrote Sen. Kelly Loeffler of Georgia, a co-owner of the Atlanta Dream, to the WNBA's commissioner. The team's players strongly disagree. 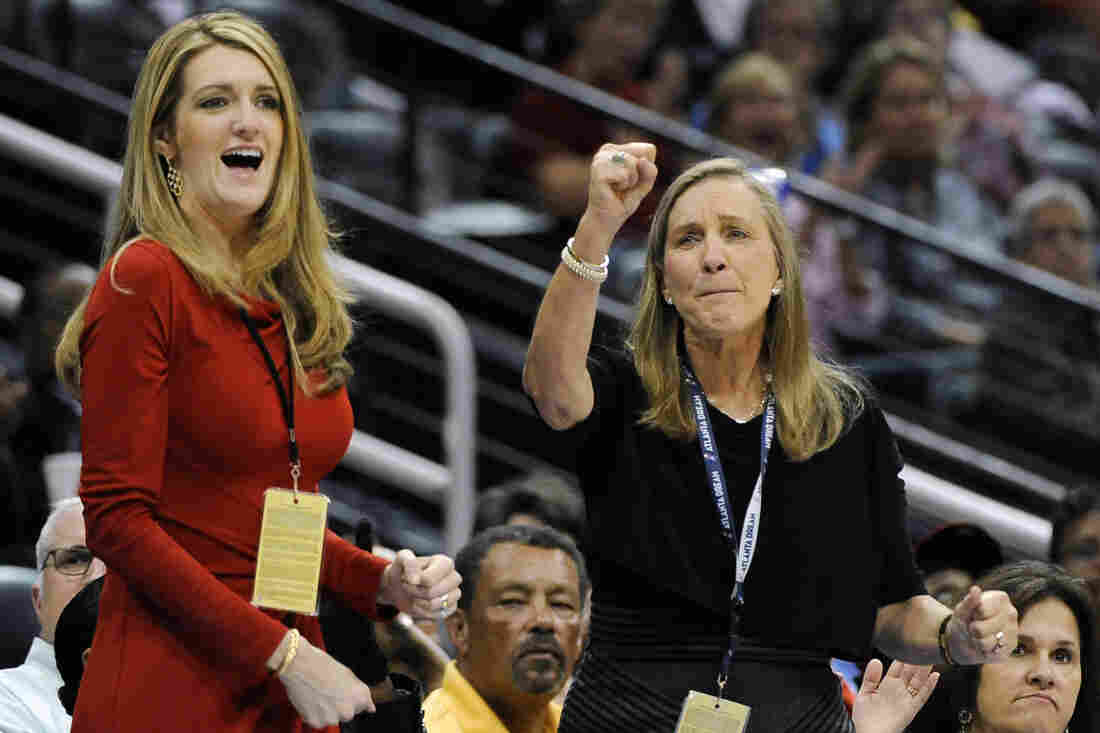 Kelly Loeffler (left), with Mary Brock, cheers the Atlanta Dream on courtside during a 2011 game. Now a senator, Loeffler faces a political challenge over her stake in the WNBA franchise in a tough election race. David Tulis/AP hide caption 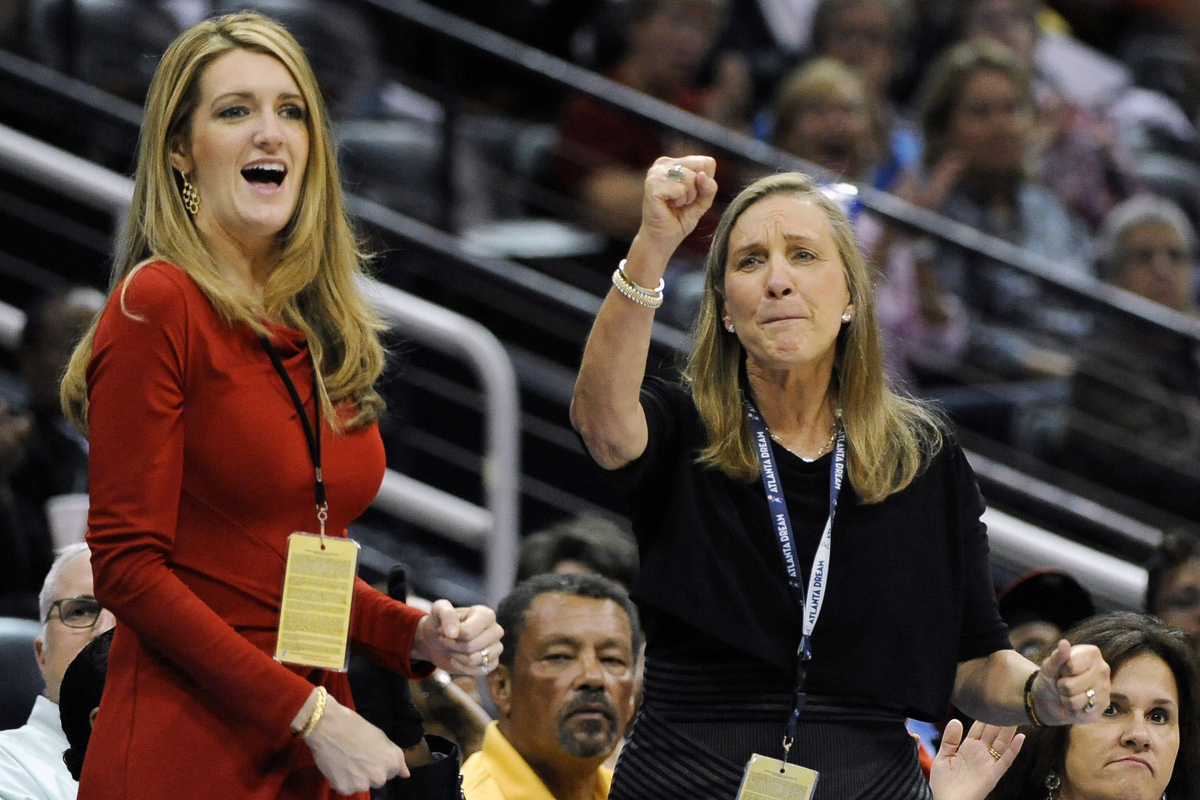 Kelly Loeffler (left), with Mary Brock, cheers the Atlanta Dream on courtside during a 2011 game. Now a senator, Loeffler faces a political challenge over her stake in the WNBA franchise in a tough election race.

Sports, race and politics have come together to create a political challenge for Republican Sen. Kelly Loeffler of Georgia, who co-owns the Atlanta Dream, the city's WNBA team.

Loeffler, who's facing a tough election this fall, has drawn scrutiny for calling on the league's commissioner to drop support of the Black Lives Matter movement. The WNBA and its union have decided to put "Black Lives Matter" and "Say Her Name" slogans on warmup gear and opening weekend team uniforms.

"The truth is, we need less — not more politics in sports," Loeffler wrote in a letter to WNBA Commissioner Cathy Engelbert last week. "In a time when polarizing politics is as divisive as ever, sports has the power to be a unifying antidote."

"There is no room for racism in this country. We cannot have it," Loeffler went on to say of her stance at a campaign stop in Winder, Ga. "But there is an organization, different from the saying, an organization called Black Lives Matter founded on Marxist principles. Marxism supports socialism."

Engelbert rejected the appeal, saying the league will "continue to use our platforms to vigorously advocate for social justice." The players union, the WNBPA, has demanded Loeffler be removed as an owner of the Atlanta Dream.

"I think it's a really uninformed, political, reactive statement that divides our country and in a league that has always sought tolerance, it's pretty shocking," Loeffler said of the reaction from the league.

Loeffler became a senator in January, replacing retiring Sen. Johnny Isakson, and she previously was a financial services executive.

She said she's standing up for free speech and for people who feel attacked for voicing conservative beliefs. That's a message that is resonating, said Georgia Public Service Commissioner Tim Echols, who has endorsed Loeffler.

Elizabeth Williams has played on the Dream since 2016 and serves on the union's executive committee.

"It's clear that [Loeffler is] trying to use the idea of Black Lives Matter and politicizing it for her gain. And that's on her if that's what she wants to do," she said.

Williams called it "disappointing" to read Loeffler's statements, especially because the league is made up of about 80% Black women.

"I think it's ironic for her to make these statements and for her to still want to be associated with the team," Williams said.

Loeffler maintains she won't back away from her ownership stake despite the blowback.

"The only option the Loeffler campaign had"

While Loeffler argued that her stand was about removing politics from sports, it's difficult to ignore the context in which it's happening.

Loeffler's ownership stake in the team has become a campaign liability as U.S. Rep. Doug Collins, her best-known Republican opponent, has mined it repeatedly for political attacks.

"It's really the only option the Loeffler campaign had," said Brian Robinson, a Georgia Republican strategist and communications consultant of the move.

She "had to go on defense and to try to block off that line of attack from Doug Collins," he said.

Collins' campaign has called out a past Dream game that allowed fans to donate a portion of ticket proceeds to Planned Parenthood, and for a past game honoring former gubernatorial Democratic candidate Stacey Abrams

Robinson said Loeffler also had to go on the offensive to win over Georgia's Republican base, because while she is in a free-for-all, "jungle" special election without party primaries, she needs the state's loyal Republican voters in November.

Under Georgia's special election rules, a candidate must win more than 50% of the vote to avoid a runoff. Loeffler faces 20 opponents, and a runoff between the top two vote-getters is almost certain.

"The Republicans will pick their candidate, and the Democrats will pick theirs," Robinson said. "Let's be serious — this is not a general, this is really a primary by a different name."

After November, the race will more than likely become about winning over the state's independent voters, Robinson said.