Accessibility links
Review: 'The Only Good Indians,' By Stephen Graham Jones Stephen Graham Jones's new novel follows the aftermath of an elk hunt gone wrong and one man who's haunted by it — literally. It's a story of revenge and sorrow, but also identity and tradition. 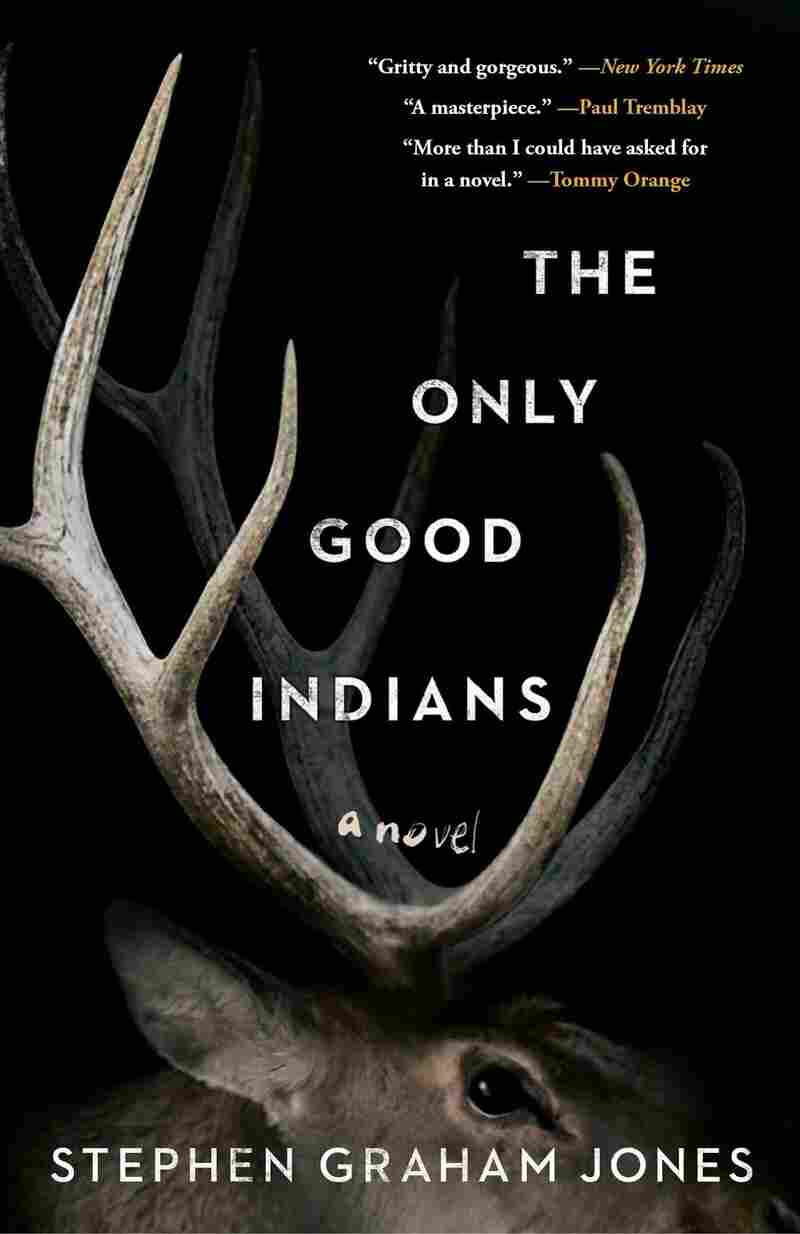 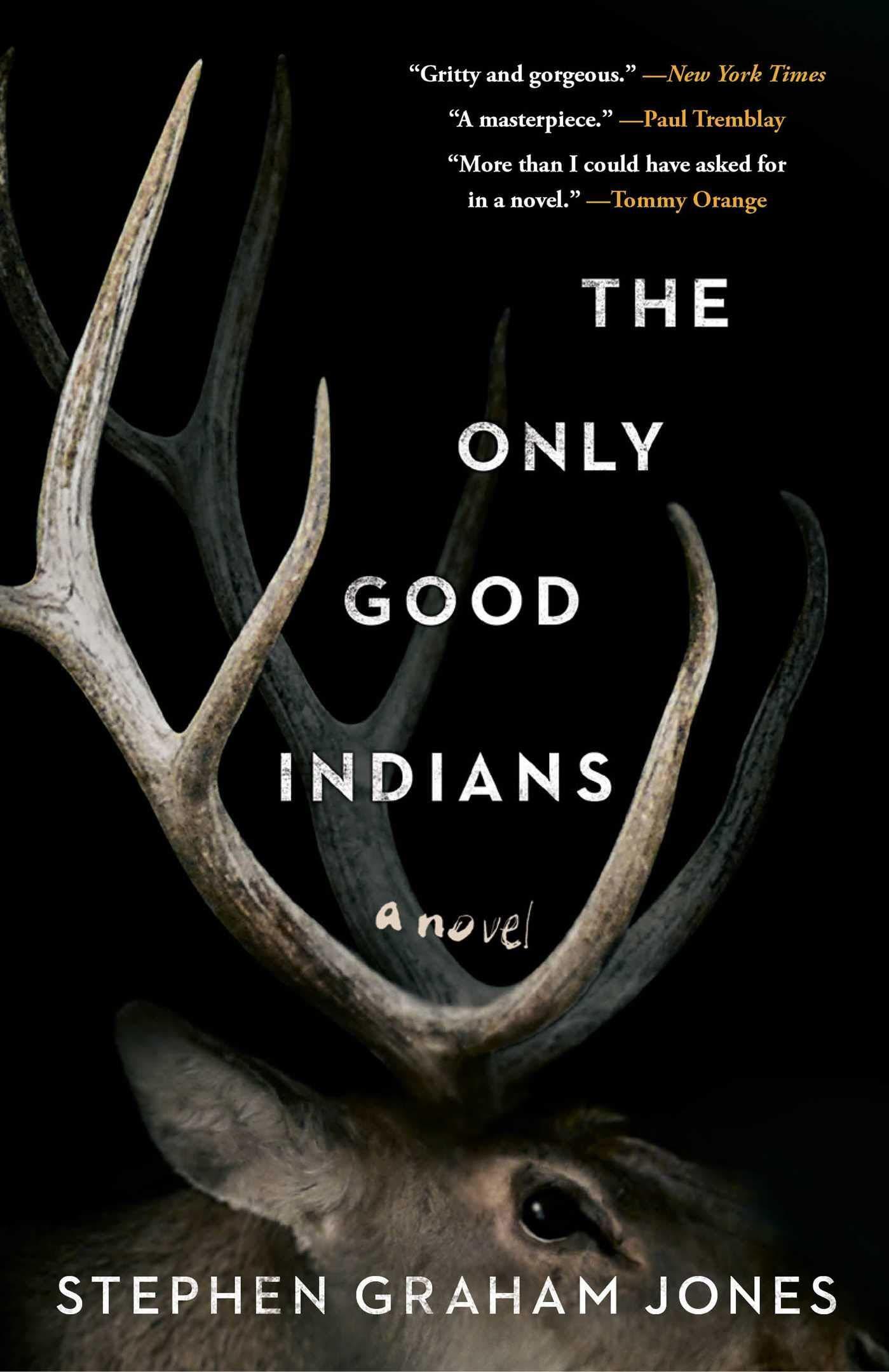 I'm always giddy when I start a new Stephen Graham Jones novel. Yes, I said giddy. Everything about the worlds, circumstances, characters, and atmospheres he creates appeals to me. When I open a SGJ novel, I know flawed characters and an engaging plot will get me hooked ... and then the weirdness will come and darkness will seep into everything, slowly, starting at the corners and spreading like a toxic, unstoppable fungus. Then people will die. In The Only Good Indians, Jones does that and more, and the more is quite special.

Four Native American friends went hunting one night on land that was reserved for tribe elders. It was dark and snow had started falling, but they found a herd of elk at the bottom of a hill. Bullets rained. Large bodies dropped. One refused to die. Lewis, one of the men, had to work hard at killing the beast, shooting it more than once. After the mayhem, nine carcasses littered the ground, the snow falling steadily on them. The friends celebrated and began field dressing the elk — that meat would keep their freezers full all winter. But the animal Lewis struggled to kill was pregnant, the calf inside it still alive. Then they got caught by the law and had to throw away the meat. Almost a decade later, what happened that night still haunts them. Lewis is literally haunted, by something that appears as a woman holding an elk's head. It killed his dog. He has to destroy it before he becomes the next victim, but killing something you already killed once is hard.

'The Only Good Indians' is a disturbing horror novel about revenge and sorrow that houses a narrative about identity and the price of breaking away from tradition at its core.

The Only Good Indians is a disturbing horror novel about revenge and sorrow that houses a narrative about identity and the price of breaking away from tradition at its core. And that identity, Native American, isn't monolithic here; the four friends are Blackfeet, and while that means being Indian, not all Indians are the same. Also, the horror is unlike anything you've read before. It goes from disturbing flashes of thing that may or may not be there to in-your-face explosions of gore and violence tinged with supernatural elements. Jones has a talent for creating unsettling atmospheres and images, but he also enjoys explicit violence; a scene where an elk calf is pulled from inside a dead woman will stay with me forever. That's a good thing.

Jones is a superb storyteller who understands great writing has to retain the same intimate quality narratives possess when they're told in person. He uses simple language and straightforward prose to craft his dialogue to deliver the action. And he uses the same brilliant simplicity to create unsettling circumstances.

After a horrific murder (which includes the use of a motorcycle, and is worth the price of admission all by itself) Lewis showers — and keeps pulling the curtain open, thinking he saw "a showed figure standing out there, sure he'd heard a door creak, or footsteps. Hooves." When he thinks he sees things, we think we see things; when he thinks elk are just elk, we know he's wrong because he's not convinced:

Elk are just elk, simple as that. If animals came back to haunt the people who shot them, then the old-time Blackfeet would have had ghost buffalo so thick in camp they couldn't even walk around, probably.

Besides the creeping horror and gory poetry, The Only Good Indians does a lot in terms of illuminating Native American life from the inside, offering insights into how old traditions and modern living collide in contemporary life. Jones, who is Blackfeet, tackles everything from marriage with whites to sports to drinking and life on the reservation. On one hand, he pays tribute to Blackfeet culture and speaks about their practices and connection to nature with reverence. On the other, he says flat out that the "three-braid days are over and done with," and that Native Americans have nothing in common now with the images that popular culture has perpetuated about them, all of which are cliché, disconnected from reality, and grotesquely reductive.

Jones has previously engaged with Native American culture in his work, especially in Growing Up Dead in Texas, a novel that reads like a memoir, The Bird is Gone, an alternate Indian history of the Great Plains, and in Ledfeather, a literary exploration of life and death in a Blackfeet reservation in Montana. However, The Only Good Indians is more nuanced than all those and goes deeper into what it means to be Blackfeet in the U.S. today. While that is reason enough to read it, the novel is also an outstanding narrative of creeping horror in which guilt is so present it's almost a character and grief, pain, and desperation combine to feed the monsters of the past and allow them to haunt the present. Jones is one of the best writers working today regardless of genre, and this gritty, heartbreaking novel might just be his best yet.