Accessibility links
Pandemic And Protests Spark Record Gun Sales About 3 million more guns than usual have been sold since the pandemic started. And nearly half of all the sales appear to be to those buying guns for the first time. 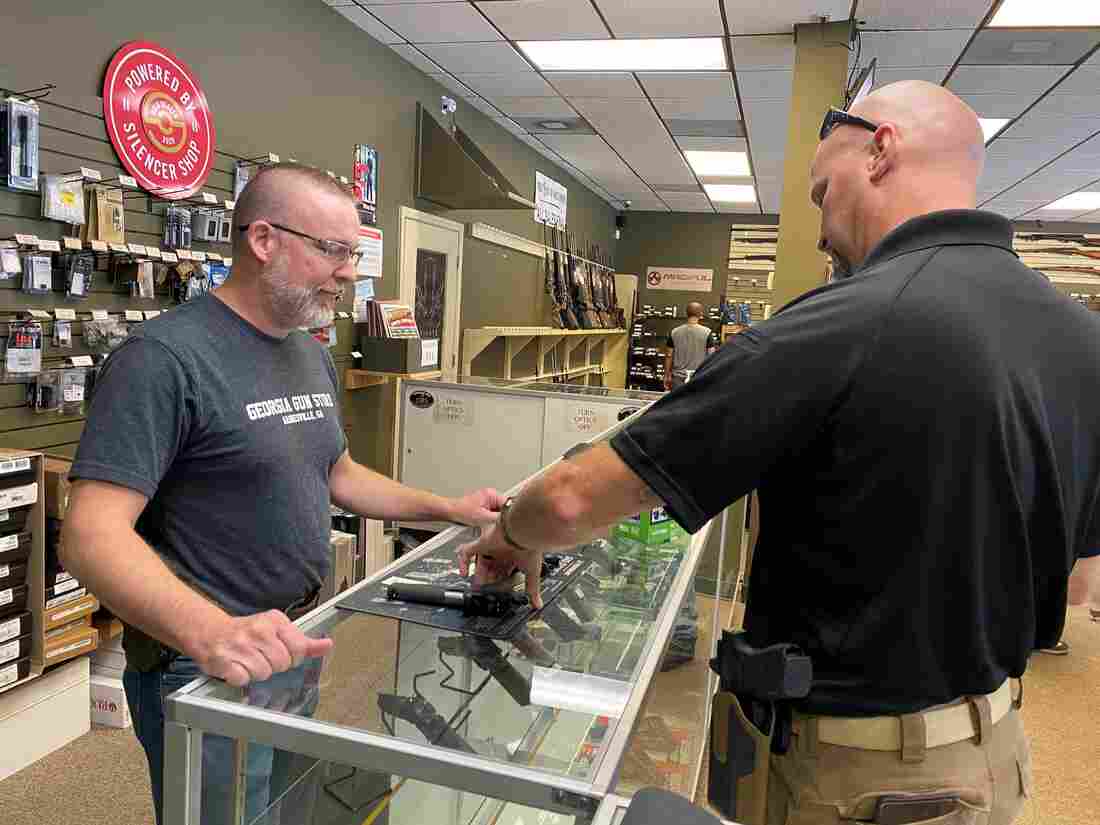 "Most of it is is new gun owners," says Michael Weeks (left), a gun store owner in Gainesville, Ga. By one estimate, Americans have bought nearly 3 million more guns than usual since March. Kellie Weeks hide caption 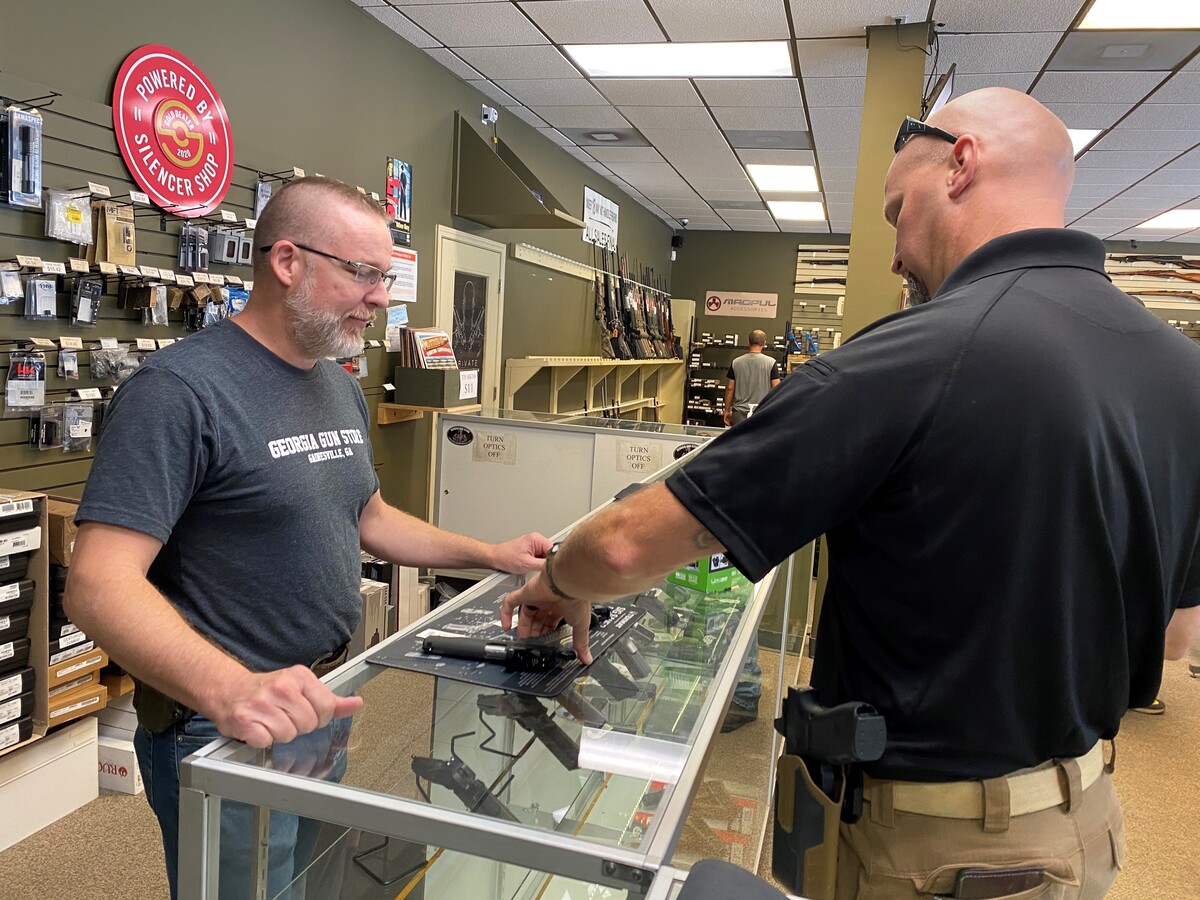 "Most of it is is new gun owners," says Michael Weeks (left), a gun store owner in Gainesville, Ga. By one estimate, Americans have bought nearly 3 million more guns than usual since March.

Mandy Collins lives in Little Mountain, S.C., with her husband and three kids. The 38-year-old never owned a gun before. Her husband doesn't have one either. But after the pandemic hit, she spent $450 on a powerful handgun.

"With all the toilet paper gone and everything, people just started acting crazy," she says. "I guess the fear of the unknown and letting prisoners out of prison, and I just ... decided I wanted to go ahead and just purchase one."

Some states have released prisoners for home detention amid the pandemic who are near the end of their sentences, who are older or who are deemed not dangerous.

Some Stock Up On Guns And Ammunition During Coronavirus Crisis

"After seeing all the riots and the lack of arrests," Collins says that too made her happy she'd bought the gun. "I am so glad I did."

Fears over the pandemic and protests are driving millions of Americans to buy guns at a record pace. And nearly half of them appear to be first-time gun owners.

David Chipman is a former special agent with the Bureau of Alcohol, Tobacco, Firearms and Explosives who is now with Giffords, a gun violence prevention group. The U.S. hit a monthly record for gun sales in March after the virus outbreak, he says.

"You can see again on May 25, when George Floyd was murdered and then the lawful protests and the looting and rioting that followed as well, again saw an enormous spike in gun sales," he says.

Chipman says that lasted all the way through June.

The government doesn't track firearms sales, but it does track background checks that are required to buy guns from licensed dealers. For handguns in June, those were nearly three times higher than a year earlier.

Phillip Levine is an economist and professor at Wellesley College who just co-wrote a report looking at gun permit data and Google searches. "The search term 'buy gun' is a really good indicator of gun sales," he says.

Levine estimates that, so far, about 3 million more guns than usual have been sold since the pandemic started.

He also looked at other Google searches that contained racist language. And in his analysis racial tensions are driving at least some of the surge in sales.

The gun industry disputes that.

"I would reject the premise that people who are buying firearms are doing so because they're racist," says Lawrence Keane, the general counsel for the National Shooting Sports Foundation, a gun industry trade group.

He says people are buying guns because all the uncertainty and unrest has them concerned about their safety.

Usually, when gun sales spike it's because an event such as a school shooting is seen to make gun control laws more likely. And it's gun enthusiasts, people who already own guns, who are going out and buying more.

But something different is happening now. "We've surveyed retailers who tell us that about 40% of their customers are first-time buyers," Keane says.

Michael Weeks, the owner of the Georgia Gun Store in Gainesville, says from what he's seeing, "most of it is new gun owners." He says he's not doing much business with people who already own guns. And he says his new customers are people of all different races and income levels.

"We see a wide diversity of people come to the door," he says. "It's all over the board."

A hospital nurse was a recent customer. "She had just recently purchased a firearm and did not know how to load the firearm, didn't know anything about it, was scared to death of it," Cummins says.

Millions of people suddenly owning a gun for the first time has Chipman, the former ATF agent, worried that many won't get proper training. He says previous spikes in gun sales have resulted in more accidental deaths — including children.

And he says people shouldn't be brandishing and waving guns around like he sees in YouTube videos. He says that can provoke violence. "I was taught that you don't pull your gun unless you intend to use it."

Even though Cummins runs a firearms school, he tells people that before getting a gun, they should get a can of pepper gel. That's similar to pepper spray but it won't blow back in your face. Cummins is also a lieutenant at a local police department.

He says "95% of the situations people are going to encounter with crime do not warrant the use of a firearm." So Cummins says to protect yourself, pepper gel is almost always "a much better tool than a firearm."

Still, the industry group says 2020 is on track to be the biggest year ever for gun sales in America.