Accessibility links
Rwanda's Genocide Ended 26 Years Ago. Survivors Are Still Finding Mass Graves Remains of thousands of people are still being recovered and laid to rest at a nearby memorial to the 1994 mass slaughter. 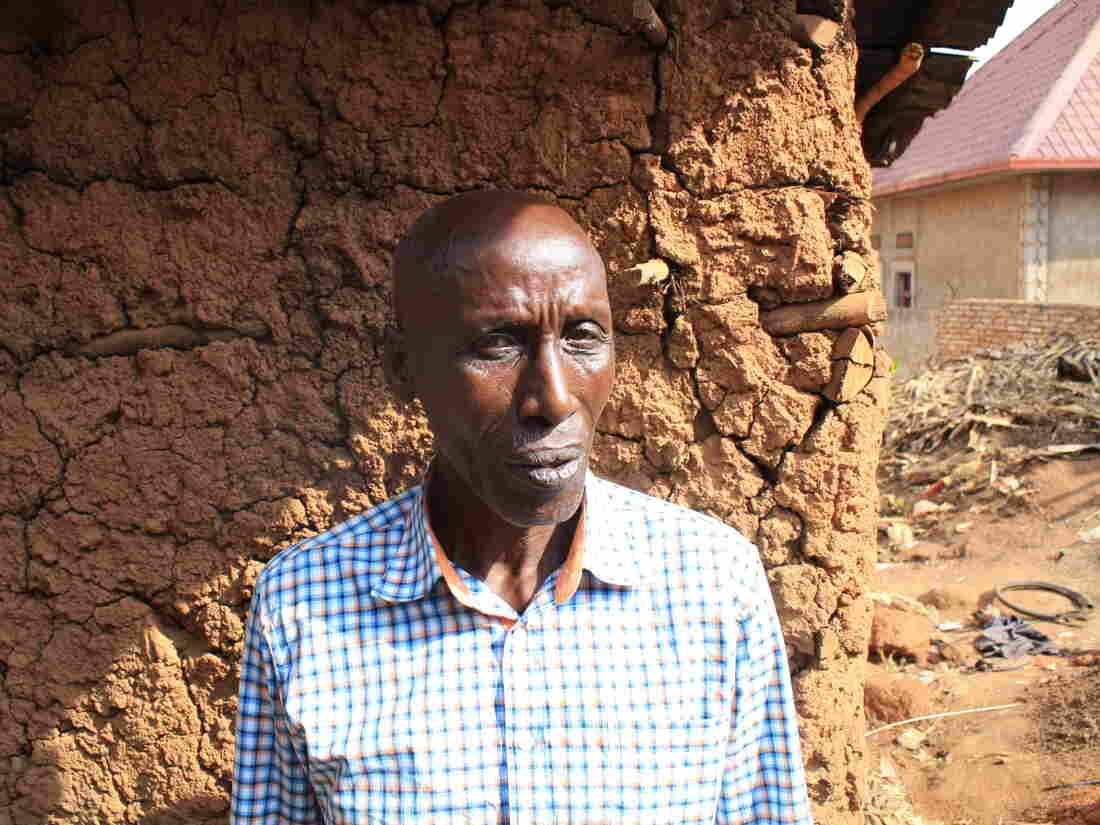 Innocent Gasinzigwa lost his wife and seven children in the 1994 Rwandan genocide. He believes God allowed him to live so that he could lay the bodies of genocide victims to rest. Melody Schreiber hide caption 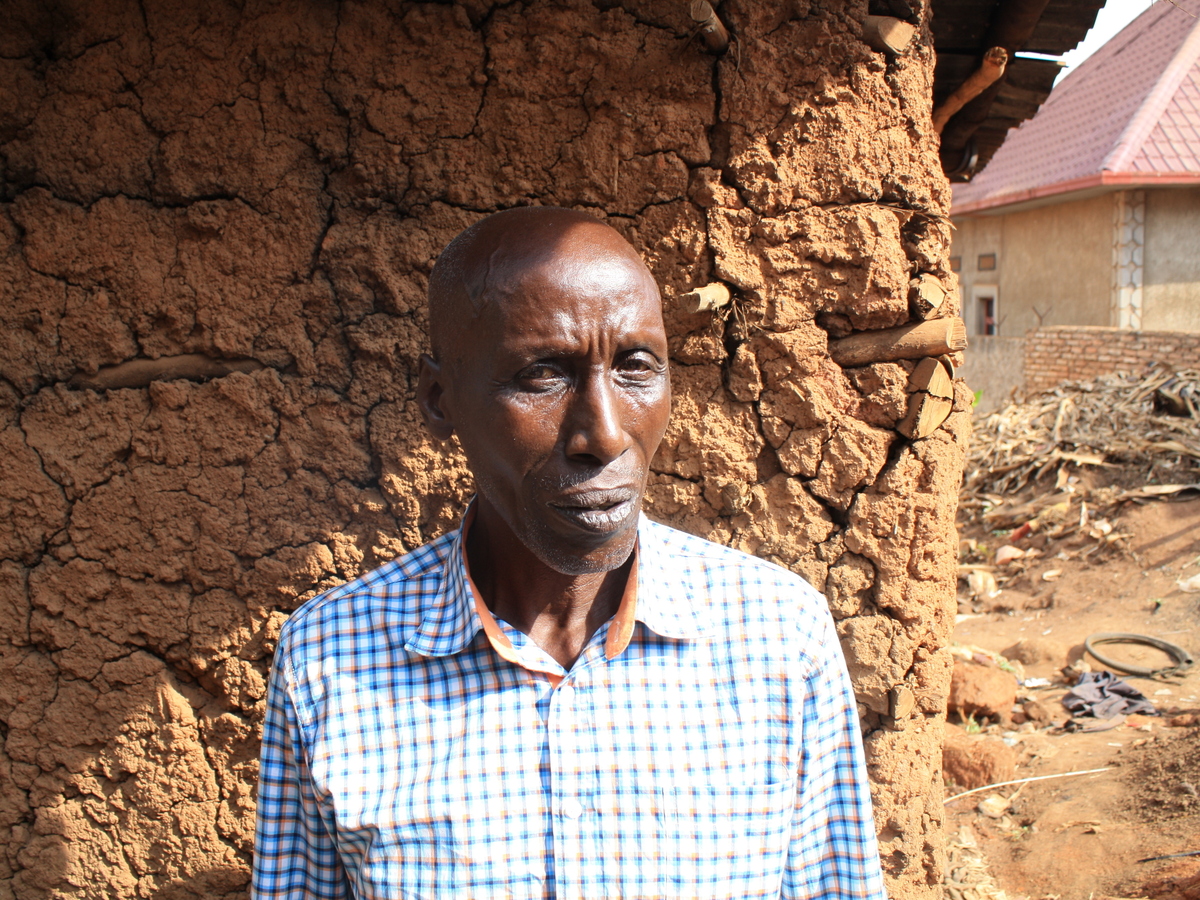 Innocent Gasinzigwa lost his wife and seven children in the 1994 Rwandan genocide. He believes God allowed him to live so that he could lay the bodies of genocide victims to rest.

From the street, the home looks like any other in this neighborhood on the outskirts of Kigali, Rwanda's capital. A pitched terra cotta roof rises above the sturdy brick wall surrounding the property. The blue metal gate has neat triangles mounted across the top to ward off potential intruders.

But when the front gate swings open, an extraordinary scene emerges.

The yard is pocked with shovel holes, some of them dozens of feet deep. Next to the holes are mounds of dirt, with the tops of leafy banana trees poking through.

It was just late last year that people were searching through 25-year-old mass graves.

The home's owners planted the trees to hide mass graves after the 100-day genocide that raged from April 7 to July 15, 1994. Now, thousands of bodies are being recovered and laid to rest at nearby genocide memorials.

Innocent Gasinzigwa, 70, is a volunteer with Ibuka, an organization of genocide survivors helping to honor the memory of those who were killed (ibuka means "remember" in the Kinyarwanda language). After receiving a tip that this property contained mass graves, he and his crew took sledgehammers and delivered blows to the ground all across the yard.

"It sounds different when there's a well underneath," he explains through a translator.

He walks over to one such "well" — a hole 20 or 30 feet deep, that was not dug to find water, but to hide hundreds of bodies. At his feet, small rocks and dirt tumble down into the darkness.

Official estimates put the death toll of the genocide between 800,000 and 1 million people. Extremist Hutu militias carried out the mass slaughter primarily of Tutsis, an ethnic minority, as well as members of the Twa ethnic group and moderate Hutus who protected those fleeing the violence or refused to participate in the violence. As many as half a million women were raped.

"These people need to be buried in respect"

Joseph Nkurunziza, the co-founder and director of Never Again, a peace-building organization focused on preventing genocide, calls it a "genocide of proximity," in which neighbors and even relatives turned against one another. 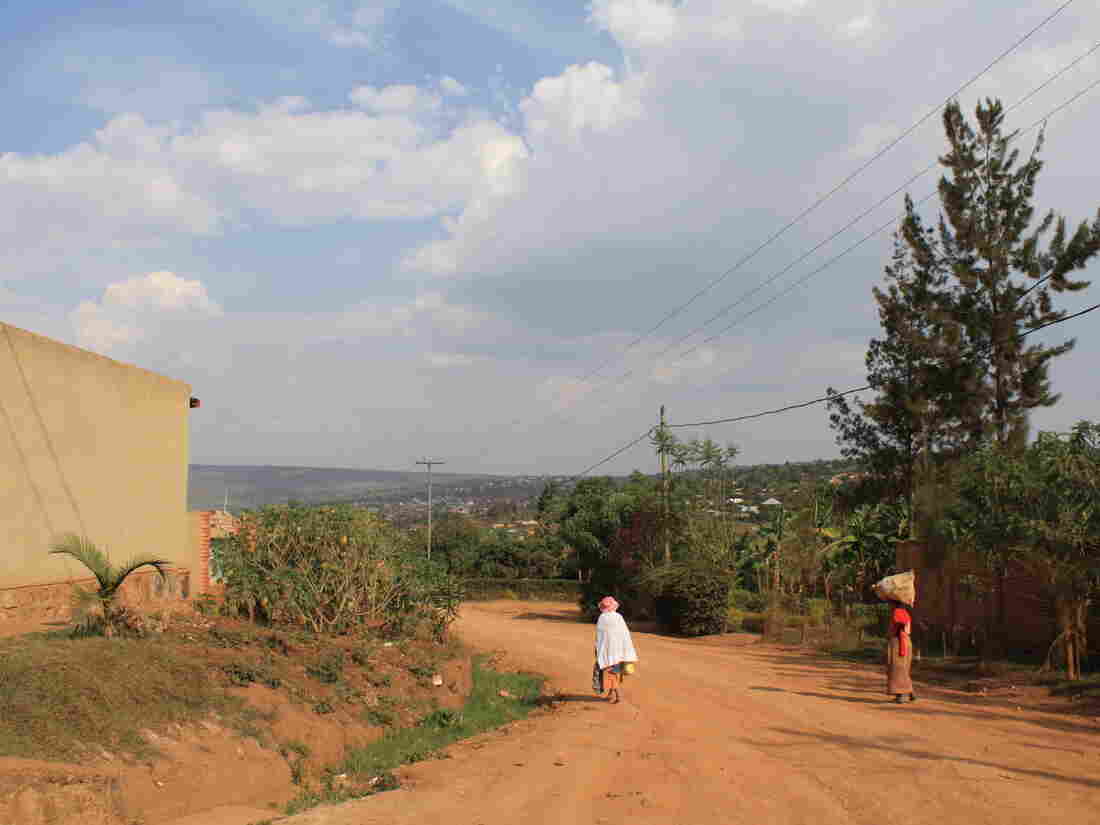 In 1994, a high-level Rwandan military officer lived in the suburbs of Kigali. He and his family set up a roadblock to intercept and kill Tutsis fleeing from the capital city, and they buried their victims in mass graves throughout their yard. Melody Schreiber hide caption 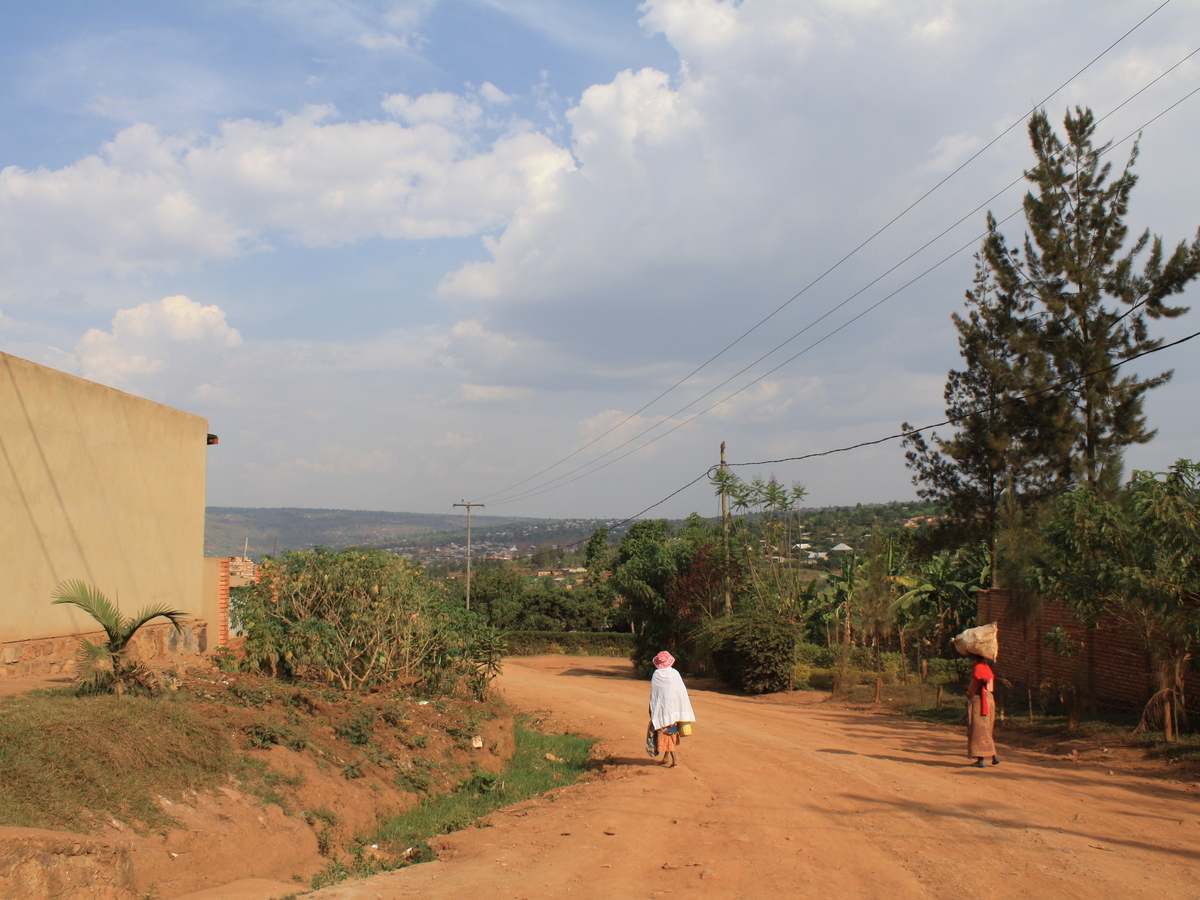 In 1994, a high-level Rwandan military officer lived in the suburbs of Kigali. He and his family set up a roadblock to intercept and kill Tutsis fleeing from the capital city, and they buried their victims in mass graves throughout their yard.

Many of the survivors of the violence still grapple with its scars, both physical and emotional.

Gasinzigwa's wife and seven children were among those killed. He bears a machete scar across the back of his neck and left ear from where a génocidaire tried to decapitate him. Gasinzigwa escaped by the grace of God, he says, and that's why he does this work of recovering victims' remains and giving them a proper burial in a nearby memorial cemetery.

"It's my purpose to do that," he says. "These people need to be buried in respect."

Nkurunziza says that proper burials are an important part of overcoming trauma.

"If you lost your loved one, there's a time you mourn. You pay your last respects. And then you bury," he says. "For purposes of healing the broken hearts, it is essential that the dead can have a decent burial."

Rwandans frequently visit these sites — cemeteries, memorials, even digs like this — to remember the victims and to vow it will never happen again. A quarter of a century later, volunteers like Gasinzigwa are still finding and exhuming mass graves all over the country.

Going back to the past can be difficult, Nkurunziza says. "But it's something that you can't shy away from because it happened."

It took 30 years of colonizers stoking ethnic tensions in Rwanda for the violence to erupt, Nkurunziza points out. Healing is "not something that can be achieved in the middle of the night."

"That history that people observed — it is a bit hard 25 years down the road to just forget it."

The sites serve as a reminder of what happened — and, he says, "a commitment that this shouldn't happen again."

"The only way is forgiveness"

A young man, paid by Rwanda's government to help excavate this site, plunges his bare hands into the earth, turning his palms up and sifting the orange-red dirt until all that remains are bone fragments — maybe 2 or 3 inches long. He sets them aside on a blue tarp. When he encounters a large clump of dirt, he picks up a hammer and delivers a few sharp blows. It could contain a calcified body part. 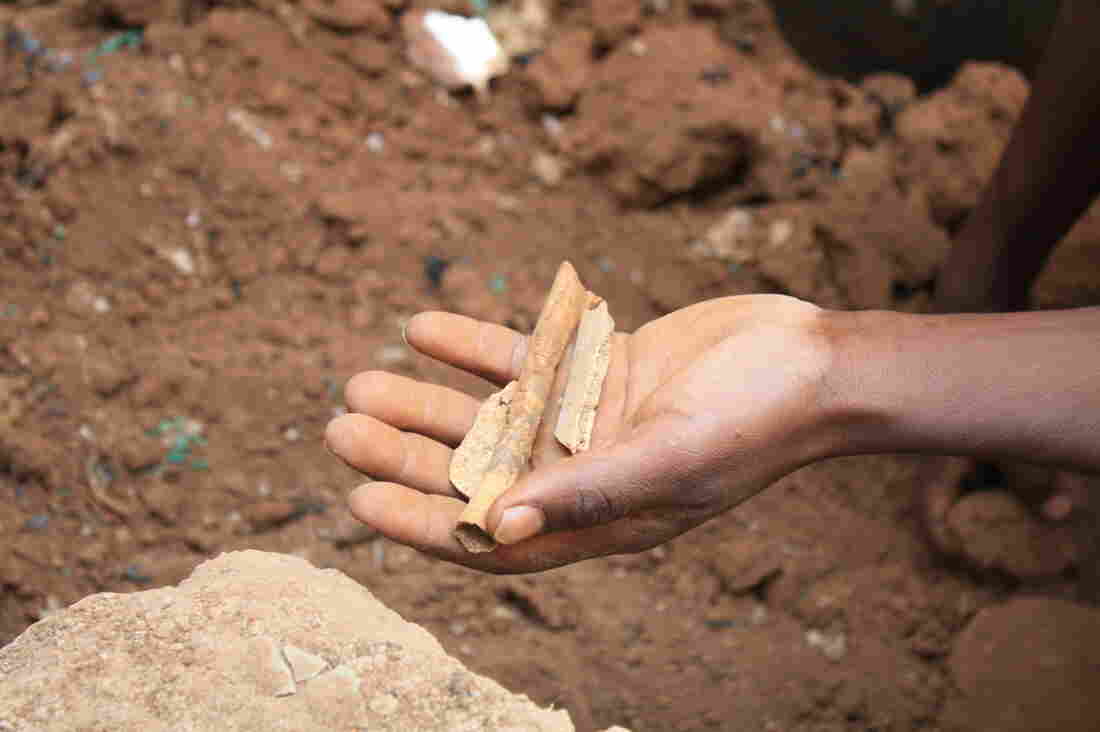 A man holds what appear to be bone fragments found at a mass grave. Melody Schreiber hide caption 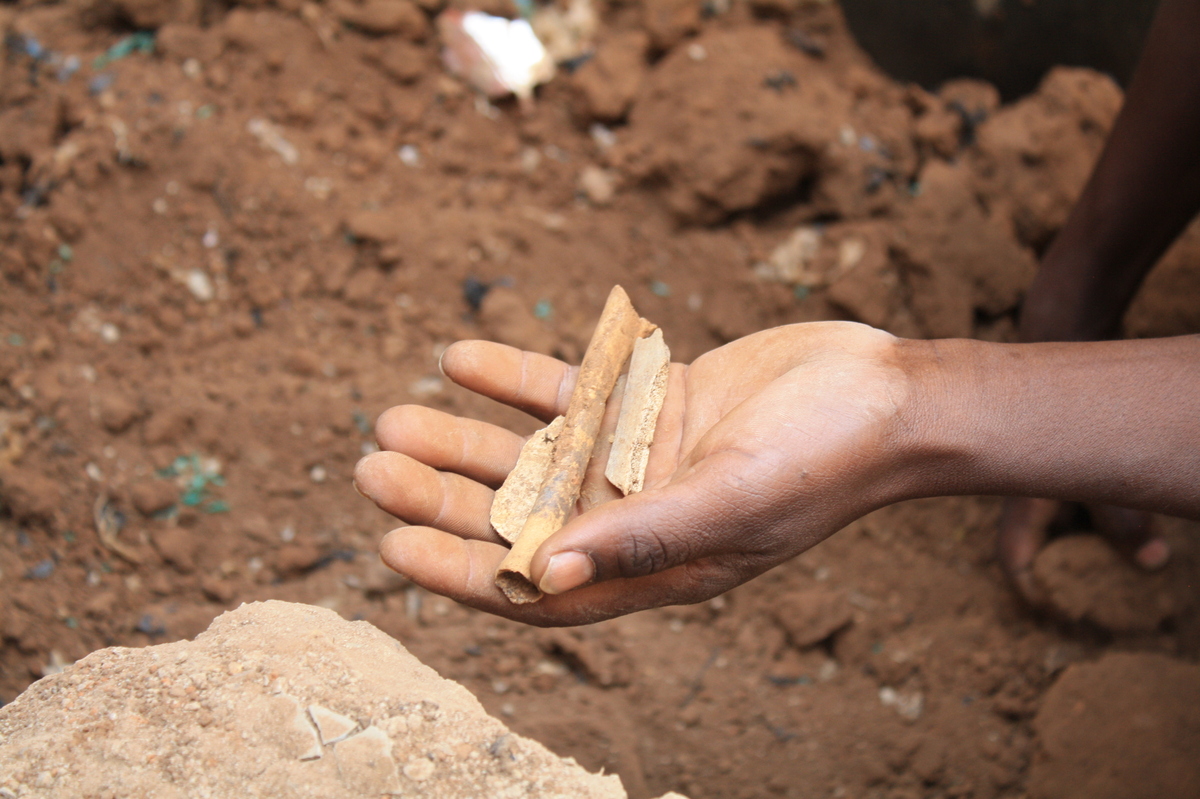 A man holds what appear to be bone fragments found at a mass grave.

By last fall, they had found the remains of an estimated 2,500 people in this dig; they expected to find at least double that before they are done. Gasinzigwa carefully sets aside any personal items and every scrap of clothing they recover in the hopes that some survivors are able to identify the remains of their loved ones.

This was the seventh mass gravesite Gasinzigwa had unearthed by September 2019, a year and a half after he began working in this village, Masaka, and the neighboring town, Kabuga. In all, Gasinzigwa and his workers have laid about 70,000 people to rest, and thousands of bodies have also been discovered by volunteers at other sites throughout the country. Gasinzigwa is certain that there are more graves nearby; he just doesn't know where to look yet.

This area was frequently used as a burial site for two reasons: It was on the outskirts of Kigali, where génocidaires would intercept Tutsis fleeing violence in the capital, and it was relatively undeveloped. After the genocide, houses were constructed — knowingly or not — atop the graves.

The man who built this home was a top military leader during the genocide, and his children were members of a local militia. They set up a roadblock at the intersection down the road to intercept Tutsis, and they would bring victims here for dismemberment, decomposition and burial. 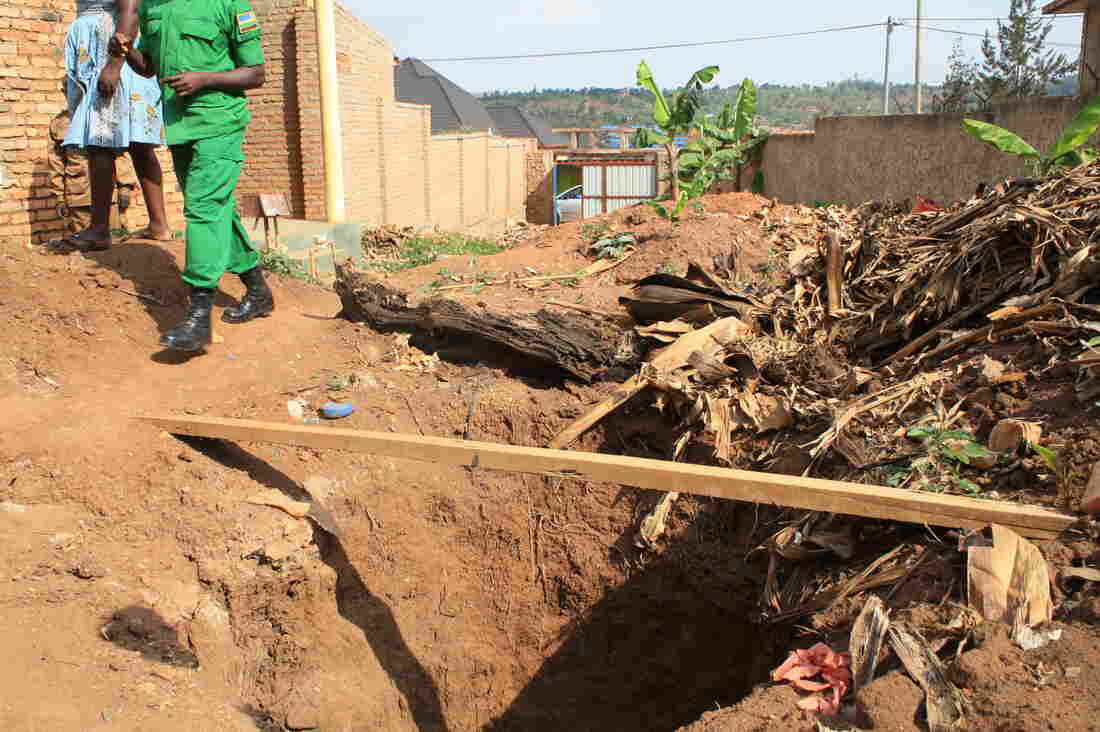 A makeshift bridge stretches across a deep mass grave. The génocidaires who lived in this house dug graves like this to hide the bodies of executed Tutsis. Melody Schreiber hide caption 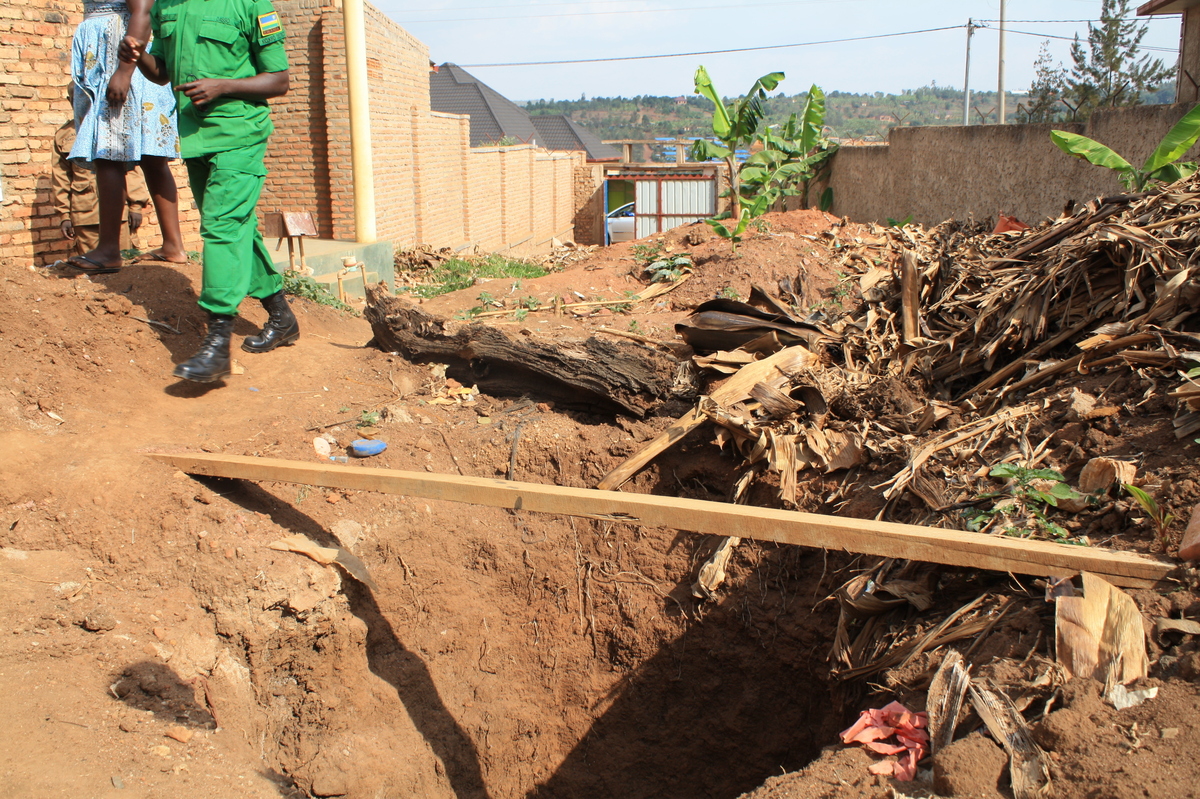 A makeshift bridge stretches across a deep mass grave. The génocidaires who lived in this house dug graves like this to hide the bodies of executed Tutsis.

The military leader's elderly wife still lives here; she is taking a nap even as workers recover bones in the dirt outside her bedroom.

"The only place that she doesn't want us to go is in the house," Gasinzigwa says. "There's also another 'well' in the house."

When the family built the home, they wanted to cover up that mass grave specifically, the tipster told him. When his crew is done combing through the yard, the police will evict the woman and the workers will tear down the house.

When he discovers graves from the genocide, Gasinzigwa turns the homeowners over to the police, but they're sometimes released with no charges. It's disappointing, he says, but retribution isn't the point.

"What matters is that the bodies of the genocide victims are finally put to rest," he says.

His wife and six of his children have already been laid to rest; one child remains unaccounted for. But he doesn't do this out of a yearning for them. He says he has come to peace with what happened.

"All of what they did, all of the killing — they didn't get anything from it," he says. "For my heart to be cleansed, the only way is forgiveness."

He seems aware this may be difficult for outsiders to comprehend, so he continues to explain. "It's the only way to do it," he says. If he didn't forgive, the hate would only fester and turn toward vengeance, and then he would be no better than they were. "For me, it's the only way — it's the only thing I can do, to forgive."

He pauses and then says simply, "To be able to go past that is to approach God."

A few days after Gasinzigwa showed NPR the gravesite, he was striding down the street again. He had gotten another tip: another mass grave, only a few hundred yards away from the last.

Melody Schreiber is a freelance journalist who reported from Rwanda on a fellowship with the International Women's Media Foundation (IWMF).