Accessibility links
John Lewis, A Force In The Civil Rights Movement, Dead At 80 Lewis began his nearly 60-year career in public service leading sit-ins at segregated lunch counters in the Jim Crow-era South. He went on to serve in Congress for more than three decades. 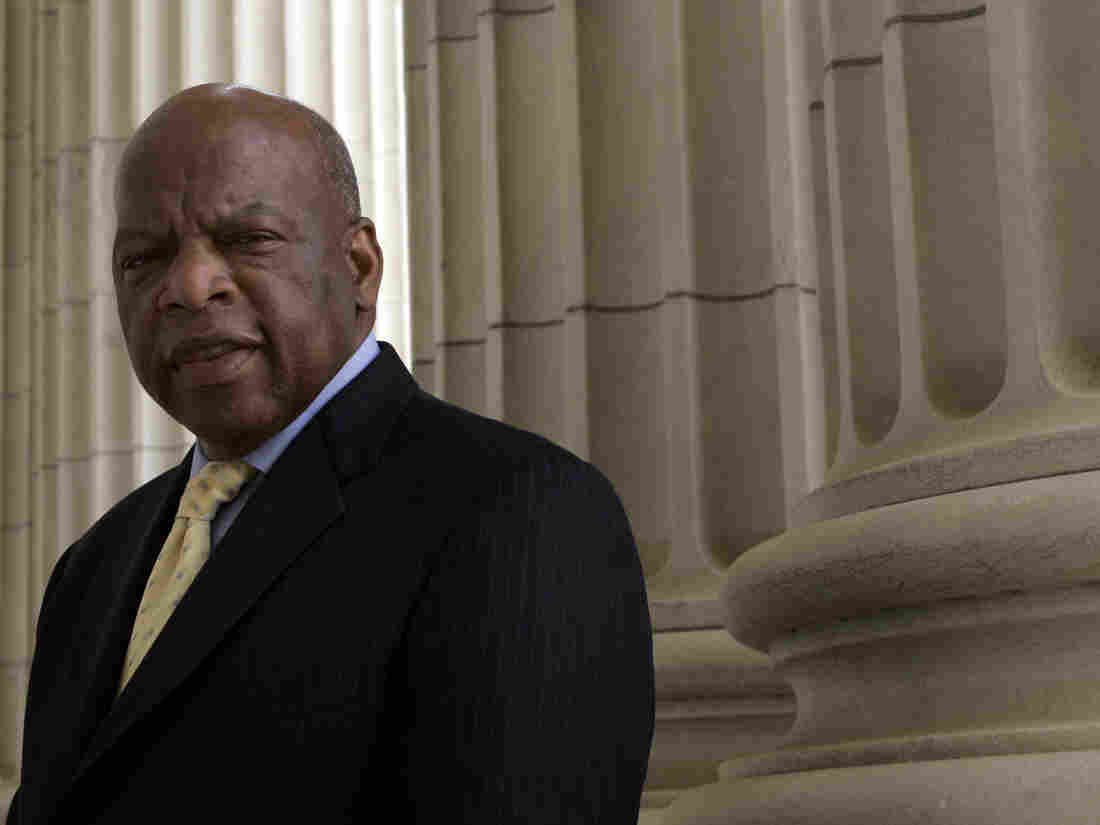 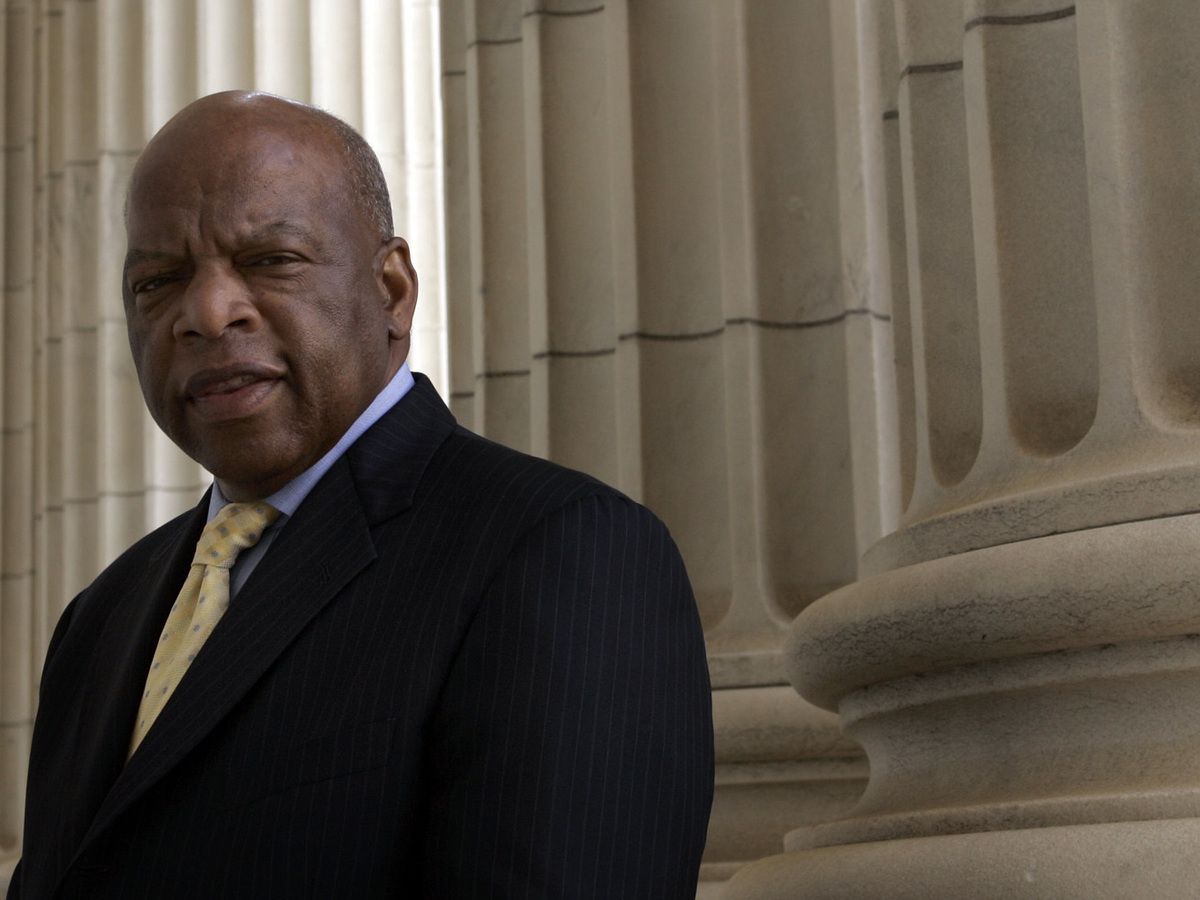 Rep, John Lewis, who spoke at the 1963 March on Washington, said it was a moral obligation to stand up for his beliefs.

John Lewis — an icon of the civil rights movement, congressman and, for decades, a force in Democratic politics — died at age 80 on Friday.

Lewis had been treated for advanced-stage pancreatic cancer after being diagnosed during a routine medical exam. He publicly disclosed his diagnosis in late December.

"He was honored and respected as the conscience of the US Congress and an icon of American history, but we knew him as a loving father and brother," Lewis' family said in a statement. "He was a stalwart champion in the on-going struggle to demand respect for the dignity and worth of every human being. He dedicated his entire life to non-violent activism and was an outspoken advocate in the struggle for equal justice in America. He will be deeply missed."

"The world has lost a legend; the civil rights movement has lost an icon," the Congressional Black Caucus said in a statement Friday evening.

Former President Barack Obama said that Lewis was one of his heroes and that the congressman "risked his life and his blood" for his country and "inspired generations that followed to try to live up to his example."

Obama and Lewis recently attended a virtual town hall with young activists leading the demonstrations for racial equality following the police killing of George Floyd. Lewis spoke privately to Obama after the event, saying he was proud of the new generation's activism.

House Speaker Nancy Pelosi, D-Calif., called Lewis one of the "greatest heroes of American history," a man whose "goodness, faith and bravery transformed our nation."

Senate Majority Leader Mitch McConnell, R-Ky., said: "Our great nation's history has only bent towards justice because great men like John Lewis took it upon themselves to help bend it."

"Some kind of fight"

Lewis began his nearly 60-year career in public service leading sit-ins at segregated lunch counters in the Jim Crow-era South. He elevated that fight for freedom and equality with a speech on the steps of the Lincoln Memorial at the 1963 March on Washington and tested his own resolve as he and other peaceful protesters were violently beaten in 1965 while crossing the Edmund Pettus Bridge in Selma, Ala. 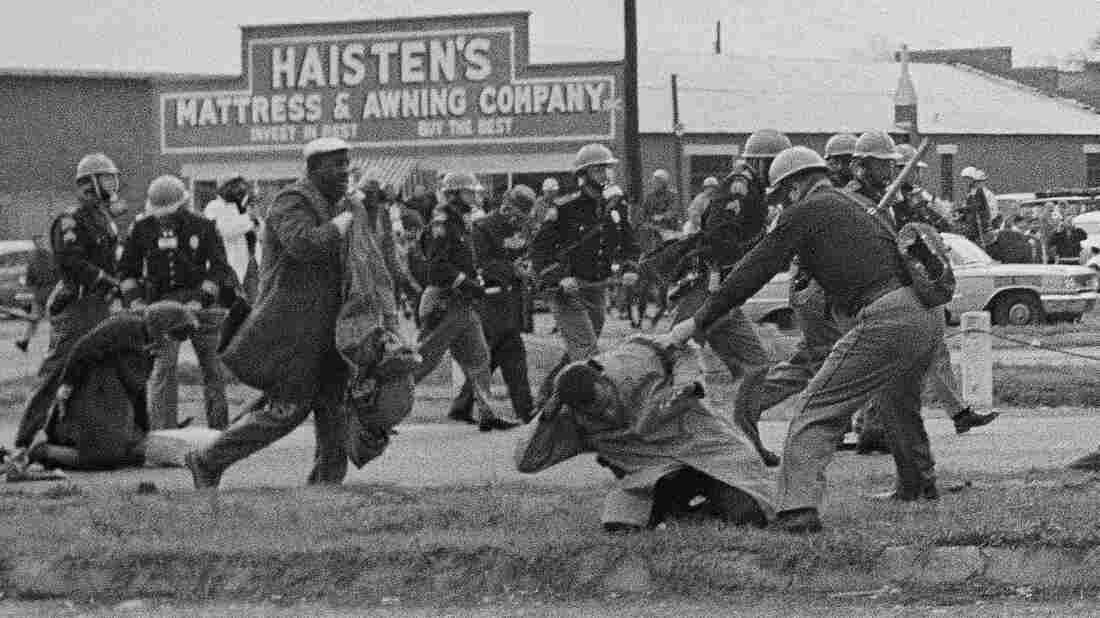 State troopers swing billy clubs at protesters, including John Lewis in the foreground, at a civil rights voting march in Selma, Ala., on March 7, 1965, that became known as Bloody Sunday. AP hide caption 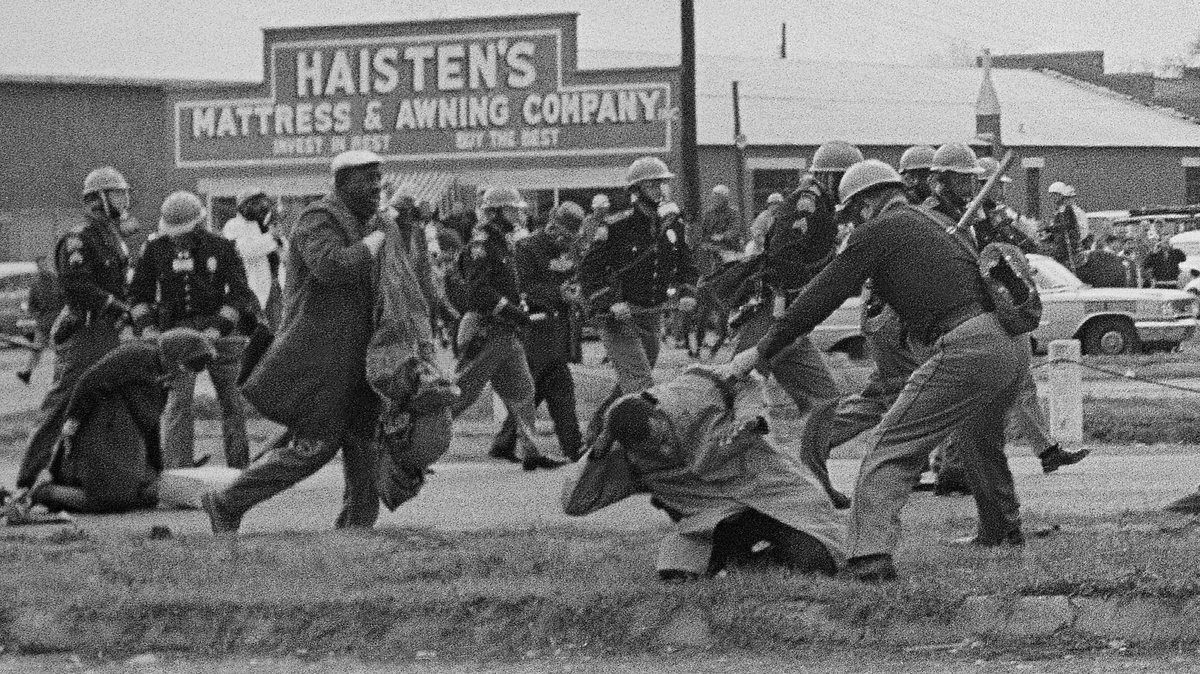 State troopers swing billy clubs at protesters, including John Lewis in the foreground, at a civil rights voting march in Selma, Ala., on March 7, 1965, that became known as Bloody Sunday.

Lewis called it a moral obligation to stand up for his beliefs. That drive for service motivated him to run for Congress, where he represented the Atlanta area in the U.S. House for more than 30 years. He continued to work after his diagnosis, pledging to face advanced-stage cancer the same way he met the other great challenges of his life: by refusing to back down.

"I have been in some kind of fight — for freedom, equality, basic human rights — for nearly my entire life. I have never faced a fight quite like the one I have now," Lewis said in a December statement announcing his diagnosis. "I have decided to do what I know to do and do what I have always done: I am going to fight it and keep fighting for the Beloved Community. We still have many bridges to cross."

Lewis was known throughout his career not only for his dedication to equality and justice but also for his unique and moving oratory. He was revered by his colleagues in Congress for his ability to capture a moment and inspire others to action, a skill he honed from his earliest days.

In a 2004 interview with the nonprofit Academy of Achievement, Lewis recalled how preaching to chickens on his family farm in Troy, Ala., prepared him for a life in Washington.

Rep. John Lewis Looks Back On The Struggle For Voting Rights

Rep. John Lewis Looks Back On The Struggle For Voting Rights

The foundation of faith that had him preaching in chicken coops also drew Lewis to the weekly radio sermons of Martin Luther King Jr. Lewis recalled in a 2009 interview with Fresh Air's Terry Gross that those early broadcasts helped inspire his future activism.

"I was so inspired by Dr. King that in 1956, with some of my brothers and sisters and first cousins — I was only 16 years old — we went down to the public library trying to check out some books, and we were told by the librarian that the library was for whites only and not for coloreds," Lewis said. "It was a public library."

He didn't set foot in that library again until 40 years later — to sign copies of his own memoir. He said the 1956 experience set him on a course toward the civil rights movement.

Lewis went on to study the techniques of nonviolent protest while attending what's now known as the American Baptist College in Nashville, Tenn.

In the summer of 1961, he and other students protested at segregated lunch counters and later joined the famous Freedom Rides. By his early 20s, Lewis was head of the Student Nonviolent Coordinating Committee, and in 1963, he joined King as a speaker at the March on Washington.

He spoke on voting rights and the future of the Democratic Party. His speech was brief, lasting less than eight minutes, but his words influenced a generation of activists.

"To those who have said, 'Be patient and wait,' " he said, "we must say that we must not be patient. We do not want our freedom gradually, but we want to be free now." 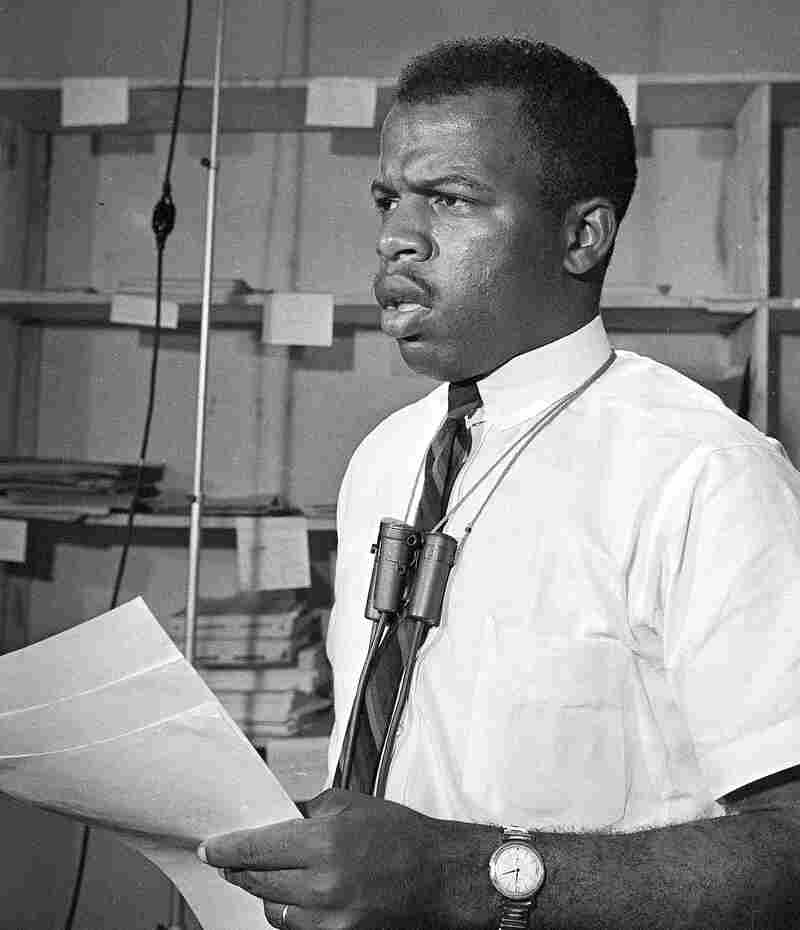 Lewis took action again two years later in 1965 in a march from Selma to Montgomery, Ala. In his interview with Fresh Air, Lewis remembered leading peaceful marchers onto the Edmund Pettus Bridge to protest voter registration. There, they met Alabama state troopers.

"In less than a minute and a half, the major said, 'Troopers advance,' " Lewis recalled. "And you saw these men putting on their gas masks. They came toward us beating us with bullwhips, nightsticks, [charging at] us with horses and releasing the tear gas. I was hit in the head by a state trooper with a nightstick. I thought I was going to die."

It came to be known as Bloody Sunday, and news images from that day were fresh in the minds of lawmakers as the seminal Voting Rights Act became law that same year.

Later, Lewis would make an annual pilgrimage to the bridge to honor that day. The event became a rite of passage for Democrats running for office, particularly in 2007 when then-Sen. Barack Obama was vying to become the nation's first African American president.

The pair repeated that walk several times, and in 2011, Obama presented Lewis with the Presidential Medal of Freedom. In his speech, Obama said Lewis had been asking himself two questions his entire life: "If not us, then who? If not now, then when?" 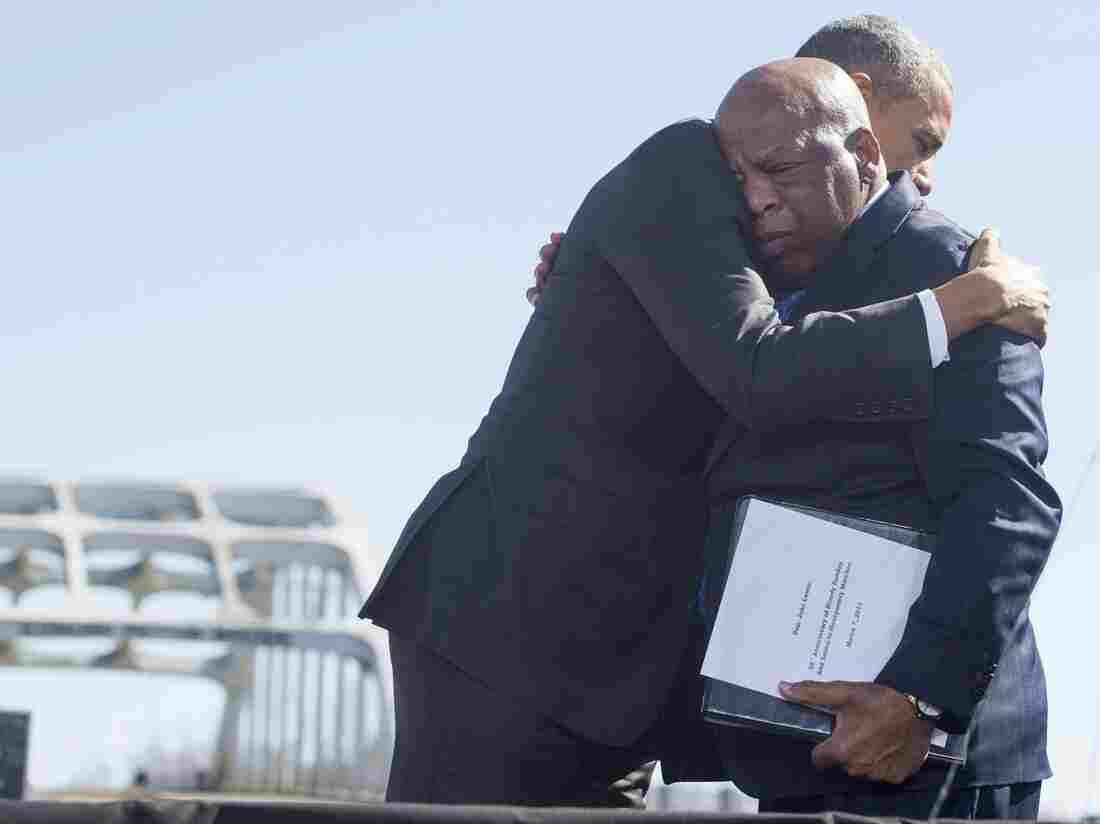 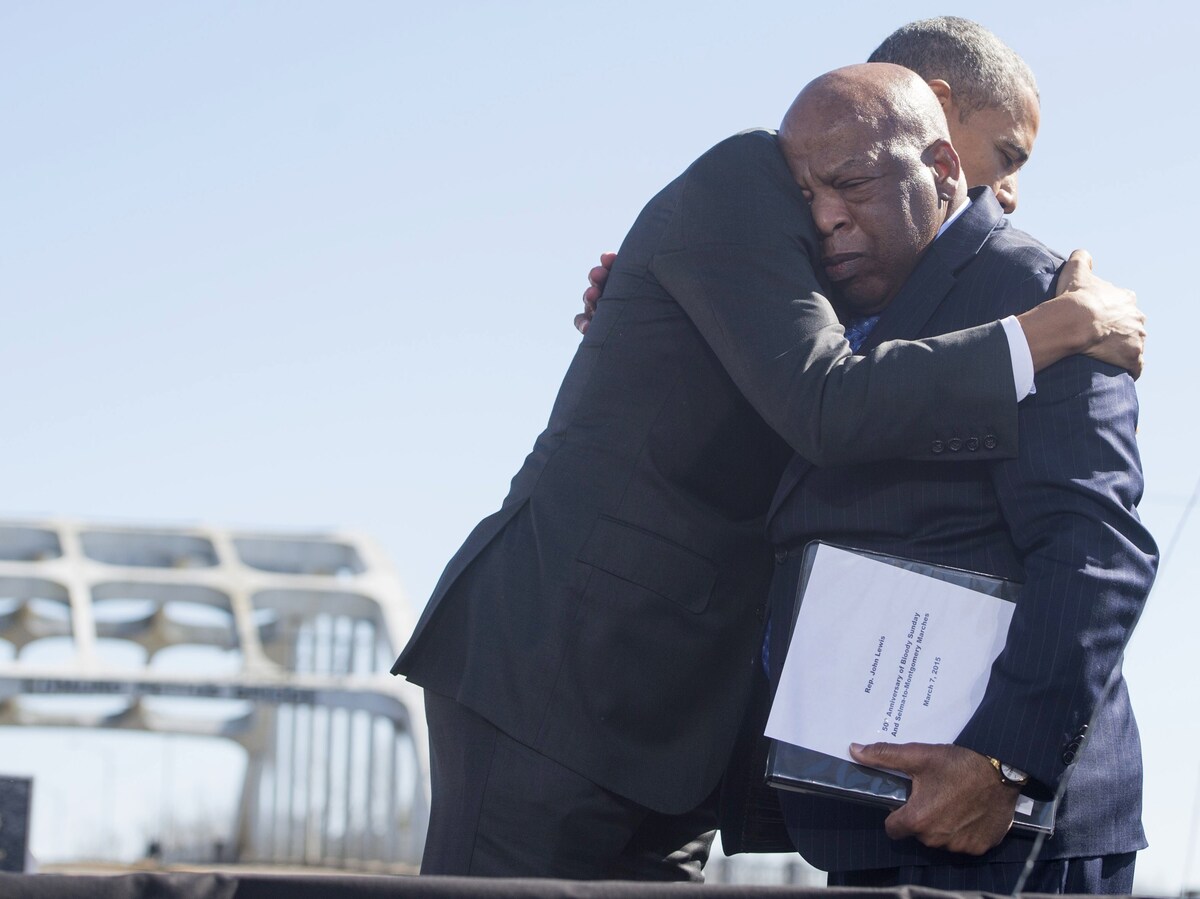 "It's why, time and again, he faced down death so that all of us could share equally in the joys of life," Obama said. "It's why all these years later, he is known as the conscience of the United States Congress, still speaking his mind on issues of justice and equality."

Lewis told NPR the honor brought tears to his eyes.

"It's hard to believe that in a short time, that we have come so far as a nation and as a people," Lewis said. "When you look back, the year that Barack Obama was born 50 years ago, black people and white people in the American South couldn't sit together on a bus or on a train or in a waiting room. And we changed that."

"Where is our courage?" 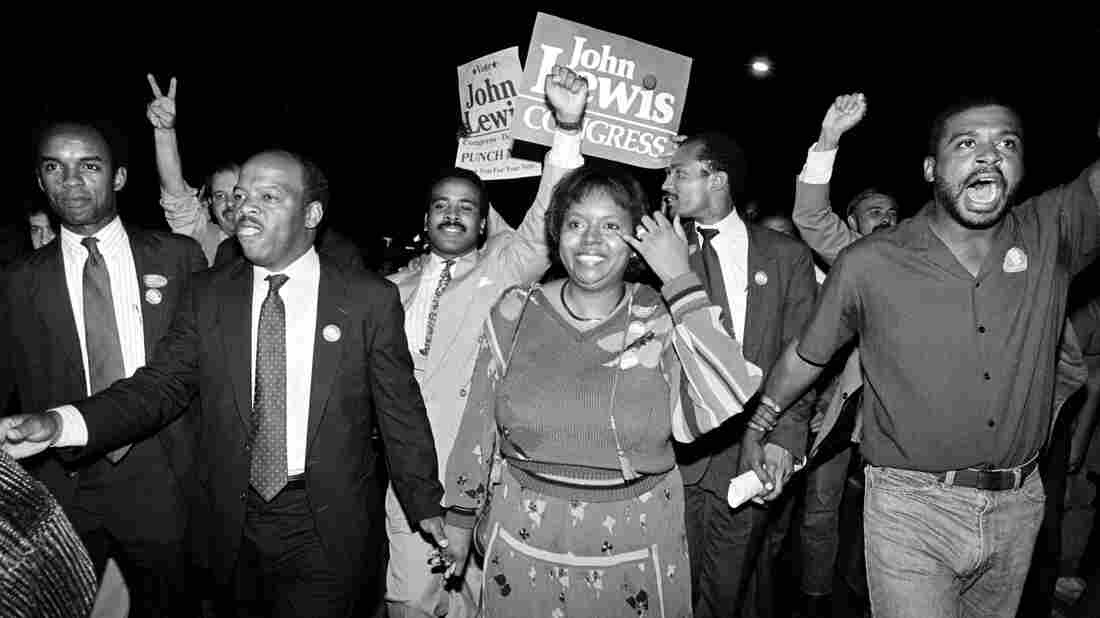 John Lewis and his wife, Lillian, lead supporters from his campaign headquarters to an Atlanta hotel for a victory party in 1986. Linda Schaeffer/AP hide caption 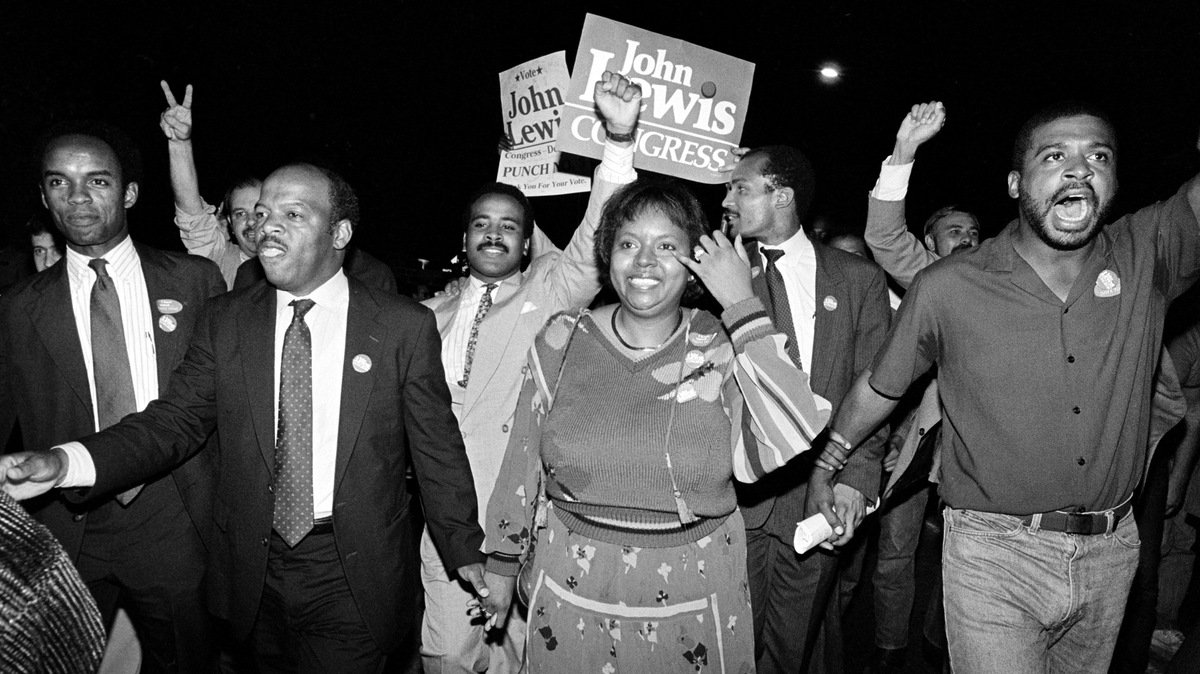 John Lewis and his wife, Lillian, lead supporters from his campaign headquarters to an Atlanta hotel for a victory party in 1986.

Lewis had become a national figure again in 1986 when he was elected to represent the Atlanta area in the House of Representatives. There, he pursued legislation on major Democratic priorities, including civil rights, health care and gun control.

Lewis was known among lawmakers for his commanding voice and delivery that helped transform routine House floor speeches into calls to action. He used that skill to push fellow Democrats to speak up and cause what he called "good trouble."

This is what he did in 2016 following the mass shooting at Pulse Nightclub in Orlando, Fla.

On the morning of June 22, Lewis began a speech on the House floor, surrounded by more than a dozen of his fellow lawmakers.

"The time for silence and patience is long gone," he said. "We are calling on the leadership of the House to bring common-sense gun control legislation to the House floor, give us a vote. Where is the heart of this body, where is our soul? Where is our moral leadership? Where is our courage?"

It was the start of a two-day sit-in to demand votes on a series of gun control measures. Democrats remained on the House floor, even after Republican leaders closed the House session and cut off the ever-present C-SPAN video feed. Democrats stayed there for two days, ultimately failing to persuade Republicans to schedule the votes.

But the moment was a rallying cry for Democrats in the following years as clashes with Republicans increased after the election of Donald Trump. 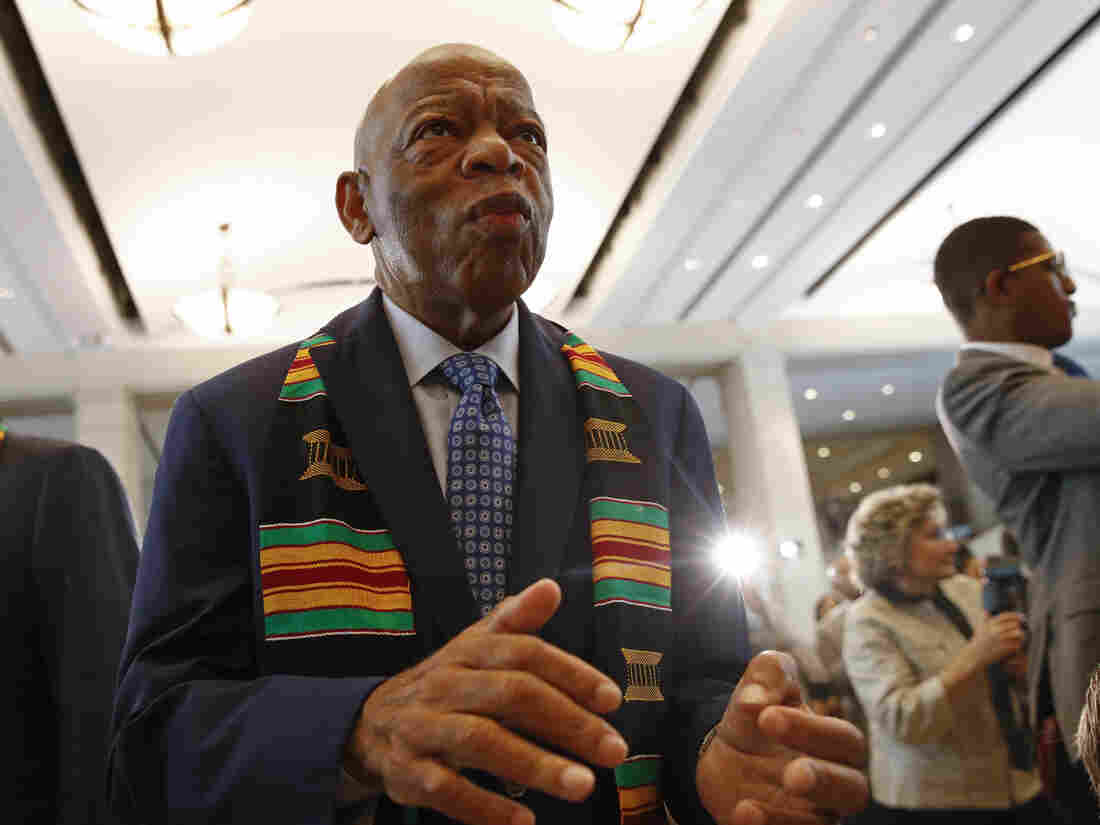 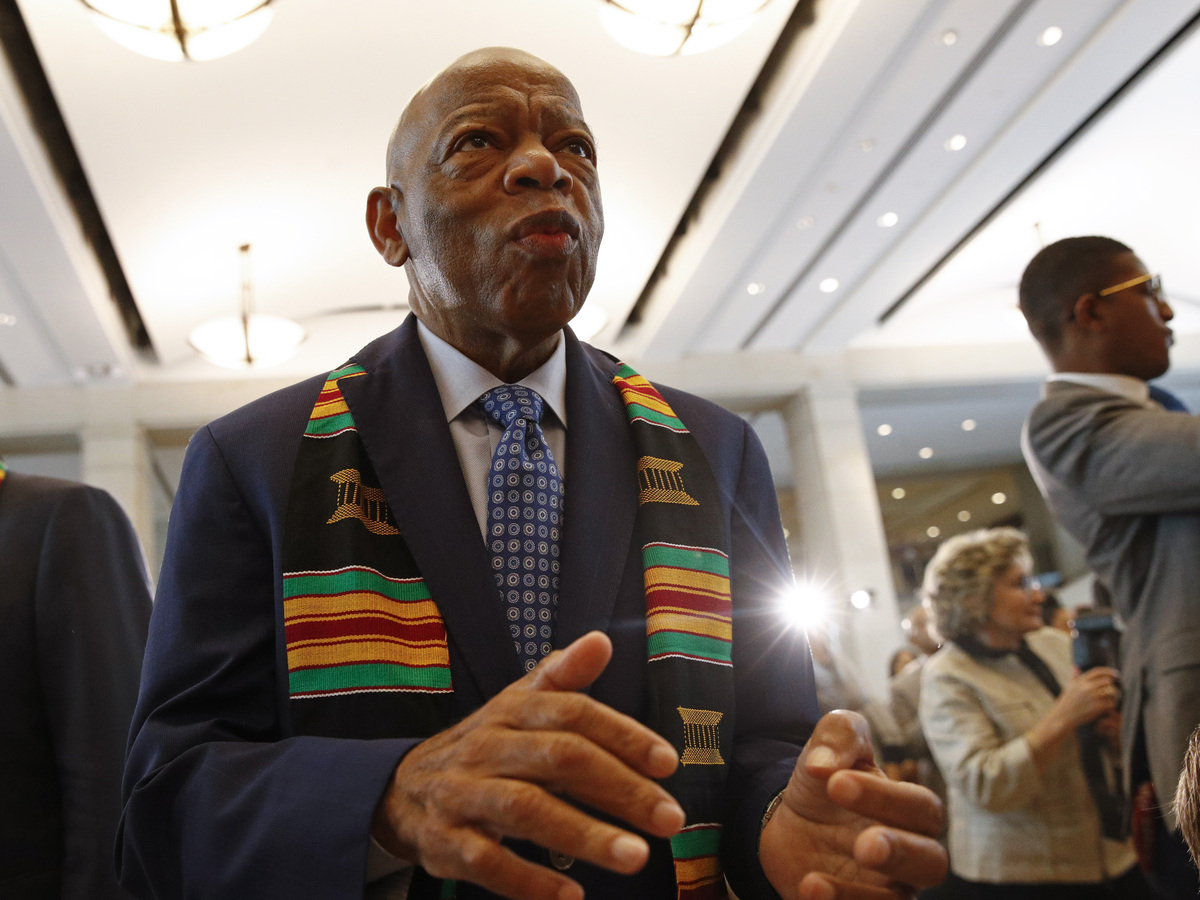 Rep. John Lewis attends a ceremony in September on Capitol Hill to commemorate the 400th anniversary of the first recorded arrival of enslaved African people in America.

Lewis publicly called Trump an illegitimate president before he even took office, citing Russian interference in the 2016 election. Lewis boycotted Trump's inauguration and was a forceful voice in the many House investigations into the Trump administration.

As the House prepared to vote to impeach Trump, Lewis compared the moment to other times when he chose to follow his sense of moral obligation.

"When you see something that is not right, not just, not fair, you have a moral obligation to say something, to do something," Lewis said on the House floor hours before the vote. "Our children and their children will ask us: 'What did you do? What did you say?' For some, this vote may be hard, but we have mission and a mandate to be on the right side of history."

Less than two weeks later, he announced his diagnosis of stage 4 pancreatic cancer. When it came to that final battle, Lewis returned to mantra he repeated on the steps of the Lincoln Memorial in 1963: Never stop fighting.

In a statement Friday night, Rep. Bobby Rush, D-Ill., said: "We will certainly miss his trumpeting voice, calling our nation to higher heights and a greater estimation of ourselves." 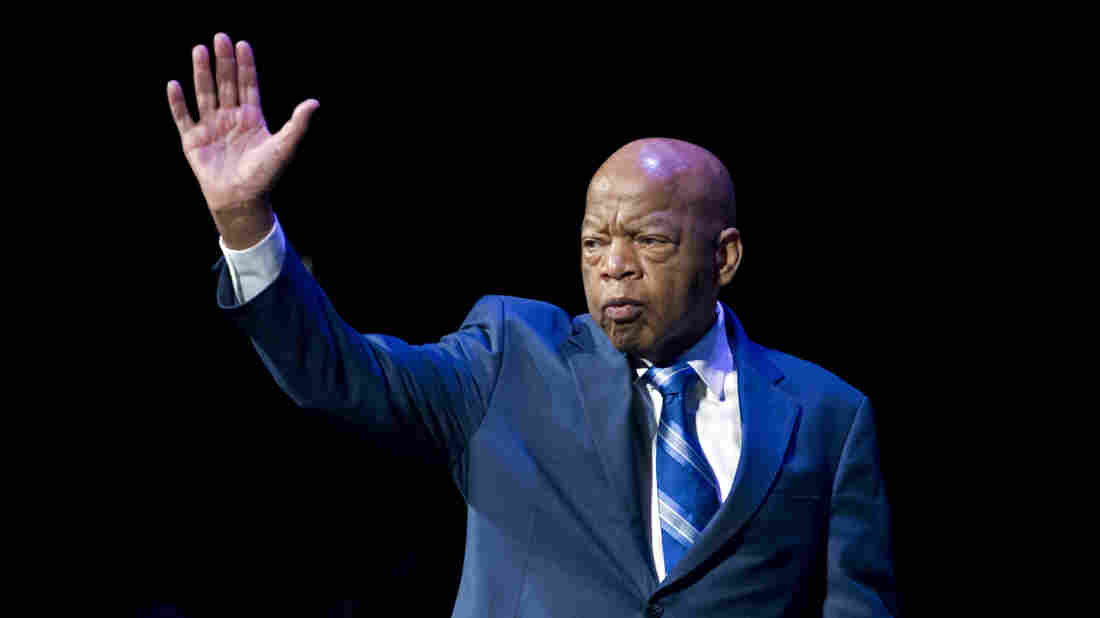 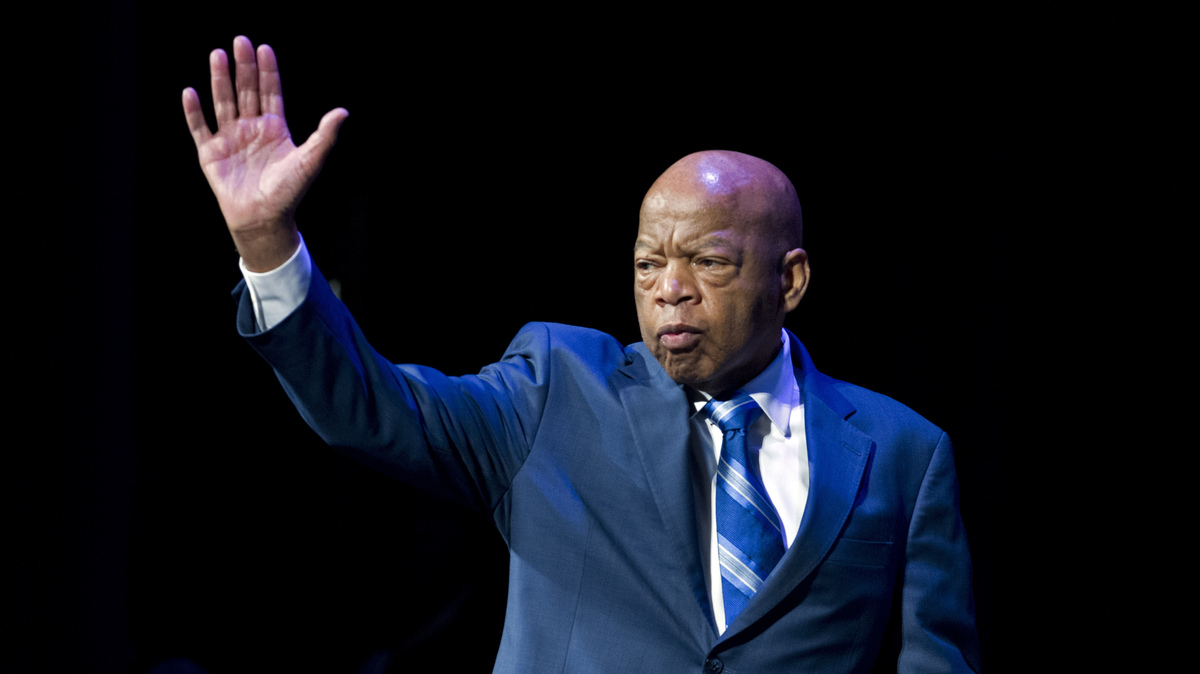