Accessibility links
Multiracial Congregations May Not Bridge Racial Divide The number of multiracial churches is growing in the United States, but the leaders of color who work in them still see attitudes of white supremacy. 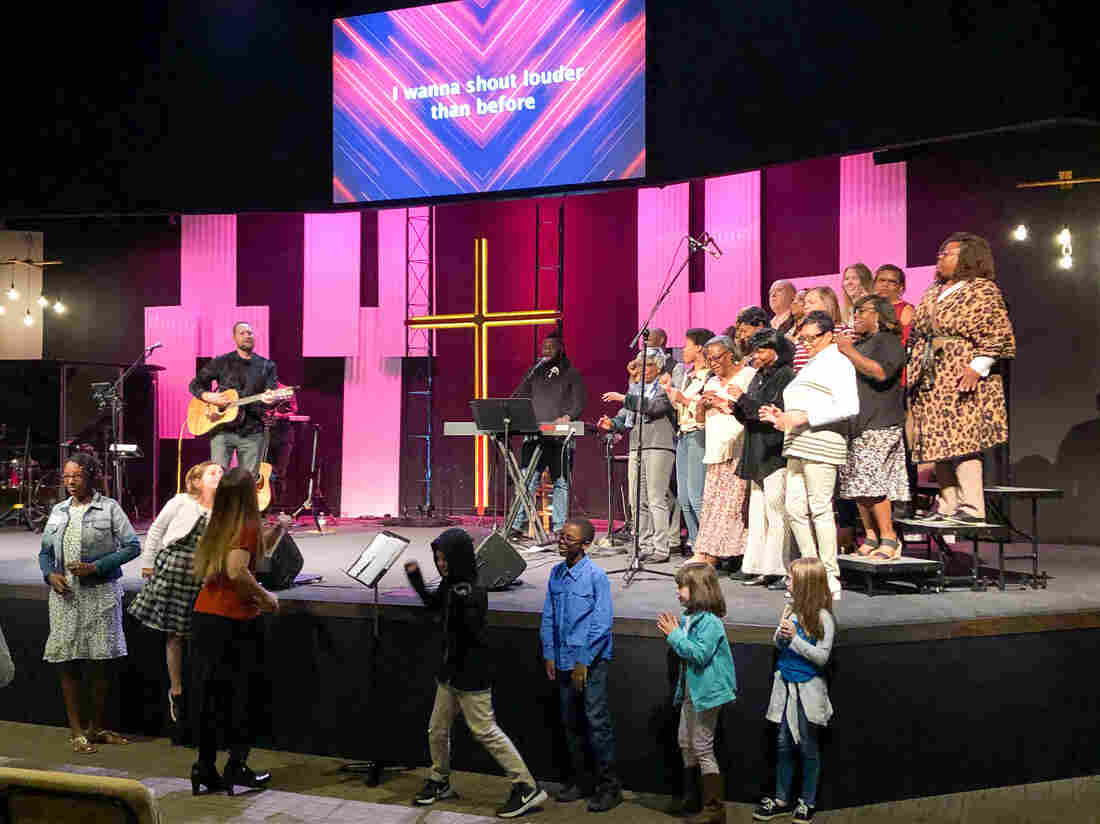 The choir at Meadowridge Baptist church in Fort Worth, Texas, performs at a worship service in October 2019. Tom Gjelten/NPR hide caption 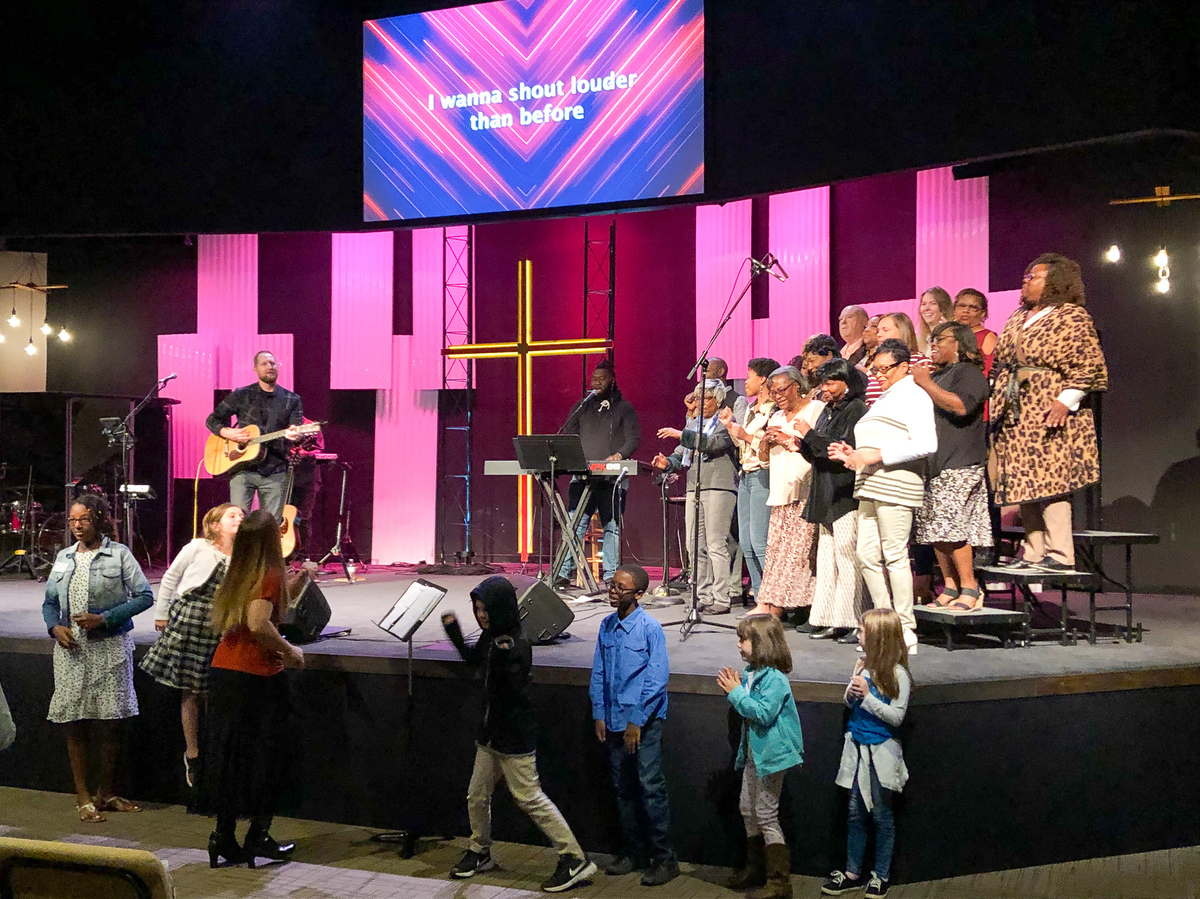 The choir at Meadowridge Baptist church in Fort Worth, Texas, performs at a worship service in October 2019.

Twenty years ago, a sociologist at Rice University directed a study of efforts by white evangelical Christians to address racial inequality. Michael Emerson's provocative conclusion, summarized in his book Divided By Faith and co-authored with Christian Smith, was that evangelicals "likely do more to perpetuate the racial divide than to tear it down," largely because they tended to worship in racially segregated congregations and viewed racial prejudice as an individual, not a societal, problem.

The book, published in 2000, captured wide attention in evangelical circles and was featured on the cover of the magazine Christianity Today.

Emerson then proposed an answer to the problem he had highlighted: If Christians of different racial backgrounds began worshipping together, he suggested, racial reconciliation could follow. In a 2004 book, United By Faith, a sequel to his earlier book, Emerson and a team of collaborators called for a new church movement.

"The 21st century," they argued, "must be the century of multiracial congregations."

Emerson, who is white, became personally committed to the cause, moving his own family into a mostly African American congregation. He soon became a godfather of sorts for the multiracial church movement, consulting with congregations around the country on how to promote diversity in worship. The key, Emerson argued, was to do it with deliberate purpose.

"You put it into your mission statement," he said in a 2019 interview with NPR. "You think about who is up on the platform during worship and who is put into leadership and the ministry. You think about the artwork and the books you're using and the music you're playing. Does it reflect all people or only one culture?"

For many, the multiracial church movement appeared to be a good idea, attracting both whites and people of color.

In Columbus, Ohio, Korie Little Edwards, who was attending a Black church, was one of those intrigued by the promise of more diversity in her worship experience.

"I bumped into someone who said, 'Hey, I go to this multiracial church, and it's down here in the city. Why don't you check it out?'" Little Edwards told NPR. "And I thought, 'Yeah, well, why not?'"

Little Edwards teaches sociology at the Ohio State University, but at the time her interest in the church was personal.

"I had this idea that, 'Yeah, this would be really great,'" she said. "I thought, 'This will be a place governed by Christian ideals, a place where people can come and connect with one another and support one another.' I was thinking that multiracial churches could be an answer to racial inequality."

In the years that followed, Little Edward's interest in the multiracial church movement became professional. As a sociologist of religion, she wanted to see whether diverse churches could help break down racism, and she began visiting congregations and interviewing members and church leaders with a team of research assistants, identifying the strategies they followed and the problems they encountered. 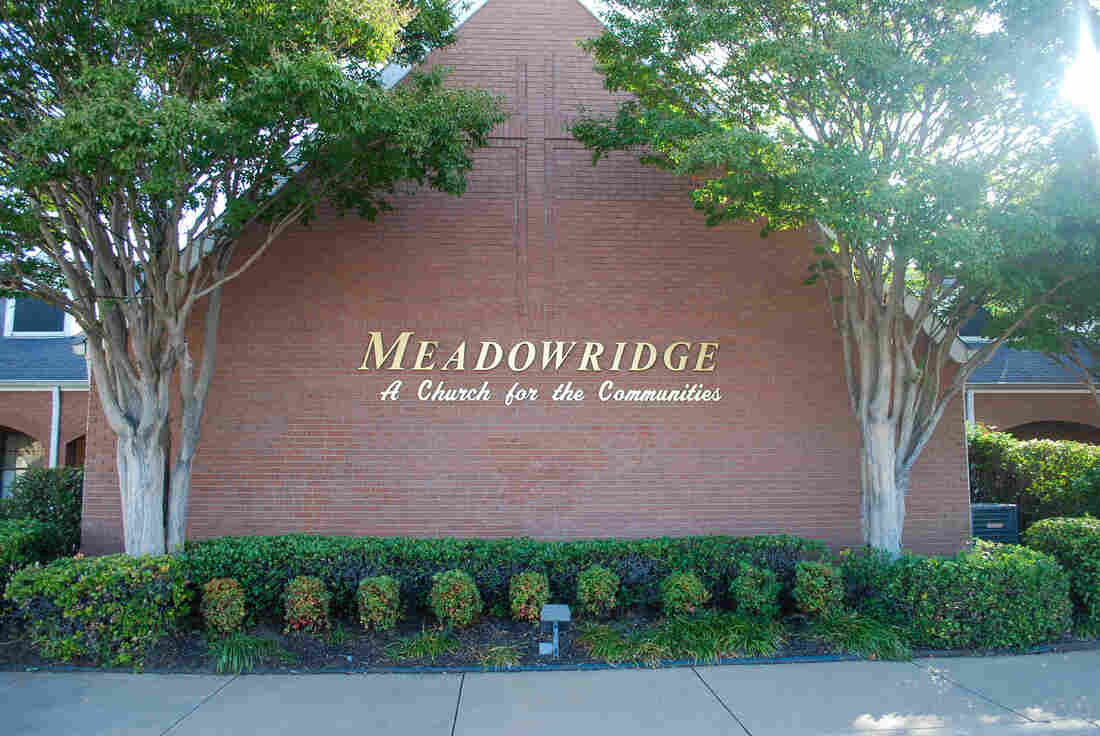 In Fort Worth, Texas, a white Southern Baptist pastor named Randal Lyle heard about Michael Emerson and his multiracial church movement and resolved to diversify his own nearly all-white church, Meadowridge Baptist. The obstacles were quickly apparent.

Lyle's youth minister organized a basketball league for African American youth from the neighborhood. When he learned some were devout Christians, he invited them to visit Meadowridge, Lyle says, only to be rebuffed.

"A young man told him, 'I'm not going there. That's a white church,'" Lyle says. He and his staff took the comment to heart.

"Our church was probably like most," he told NPR. "We'd say we would welcome anybody who wants to come here, but what we meant was, as long as they do things exactly how we do them."

After reviewing Michael Emerson's books and videos on the subject, Lyle realized big changes at his church would be needed. He changed the sign out front to say, "All Races United In Christ." The staff bought new toys for the children's room, making sure they reflected racial diversity. They changed the artwork in the church, and Lyle organized a choir.

"When I first came here, I said, 'We're not going to do choir,'" Lyle said. "But then we began to think, 'This community is primarily African American and Anglo. Choirs are huge in an African American church.' So we realized we need to have a choir."

The effort proved largely successful. The membership at Meadowridge Baptist is now about one-third African American, and the number of Latino members is growing.

"I needed a different experience," says Myrtle Lee, 73, who left the Black church she had been attending and joined Meadowridge with her two sisters. "I wanted to worship with everybody that I worked with. I work with not just Black people. I wanted to go to church with those same people."

One of her sisters, Cecilia Rhodes, says it took a while to get accustomed to worshipping in a predominantly white church.

"Sometimes, there was stares," she says. "People looking at you kind of strangely. And then I just made it my mission to hug. So I started hugging people."

Curtis Hudson, who is African American, joined Meadowridge with his wife, Andrea, who is white, shortly after they moved to the Fort Worth area.

"We were looking for a church, and what we found were either all white or all Black," Hudson says. "And then Andrea did a Google search for 'multicultural churches,' and this church came up. So we said, 'Let's check it out.'"

Meadowridge remains today one of the few intentionally multicultural churches in the Dallas-Fort Worth area.

The number of multiracial churches has actually been growing in the United States. A recently completed survey of congregations by Mark Chaves of Duke University and analyzed by Chaves, Michael Emerson, now at the University of Illinois at Chicago, and Kevin Dougherty of Baylor University found that the share of churches defined as "multiracial," with at least one out of five members from a minority background, grew from 6% in 1998 to 16% in 2019.

"Integrated churches are tough things," says Keith Moore, a Black pastor in Montgomery, Ala., who works closely with local white pastors. "When you see both African Americans and Caucasian Americans [in a church], it's more than likely to have a Caucasian pastor," he says. "I think it's sometimes more difficult for whites to look at a Black pastor and see him as their authority. That's a tough call for many."

As a result, Moore says, African Americans ready to worship in a multiracial church are often forced to accept white leadership and a different worship style.

"You have to abandon some of your ethnic culture and become more palatable to the majority white culture," Moore says, "give up some of the old traditional African American experience to fit in. So there is a sacrifice."

Moore's impressions, in fact, are supported by the research of Emerson and Dougherty.

"For the leaders of color who were trying to create the multiracial church movement," Emerson says, "they're basically saying, 'It doesn't work. The white brothers and sisters just won't give up their privilege. And so we've been defeated, in a sense.'"

The continuing power of race

In Columbus, Ohio, Korie Little Edwards found a similar pattern in her own research. After her personal interest led her to join a multiracial church, her subsequent study left her skeptical that such churches were making the difference in promoting equality that she had hoped to see.

"I came to a point where I realized that, you know, these multiracial churches, just because they're multiracial, doesn't mean they have somehow escaped white supremacy," she says. "Being diverse doesn't mean that white people are not going to still be in charge and run things."

In her book The Elusive Dream: The Power of Race in Interracial Churches, Little Edwards argued that people of color often lose out.

In their own churches, Little Edwards says, African Americans often dress formally and expect worship services to last about two hours on average. When they join diverse churches, they generally find the white members insisting on shorter services and favoring more casual dress.

Beyond style differences, Little Edwards says, Black people in a multiracial congregation may be reluctant to push for a leadership role and feel pressure instead to settle for a visible or symbolic position, as a greeter or usher or musician.

Little Edwards herself continues to attend a multiracial church, but that feature is not what binds her to the congregation, and her view of the value of integrated churches has shifted somewhat.

"I would argue that the goal shouldn't be diversity," she says. "Rather, all churches are called to be places of justice, uplifting the oppressed. That is what the Christian faith is. All churches, regardless of their racial and ethnic composition, should be like that. And then you can move toward integration."