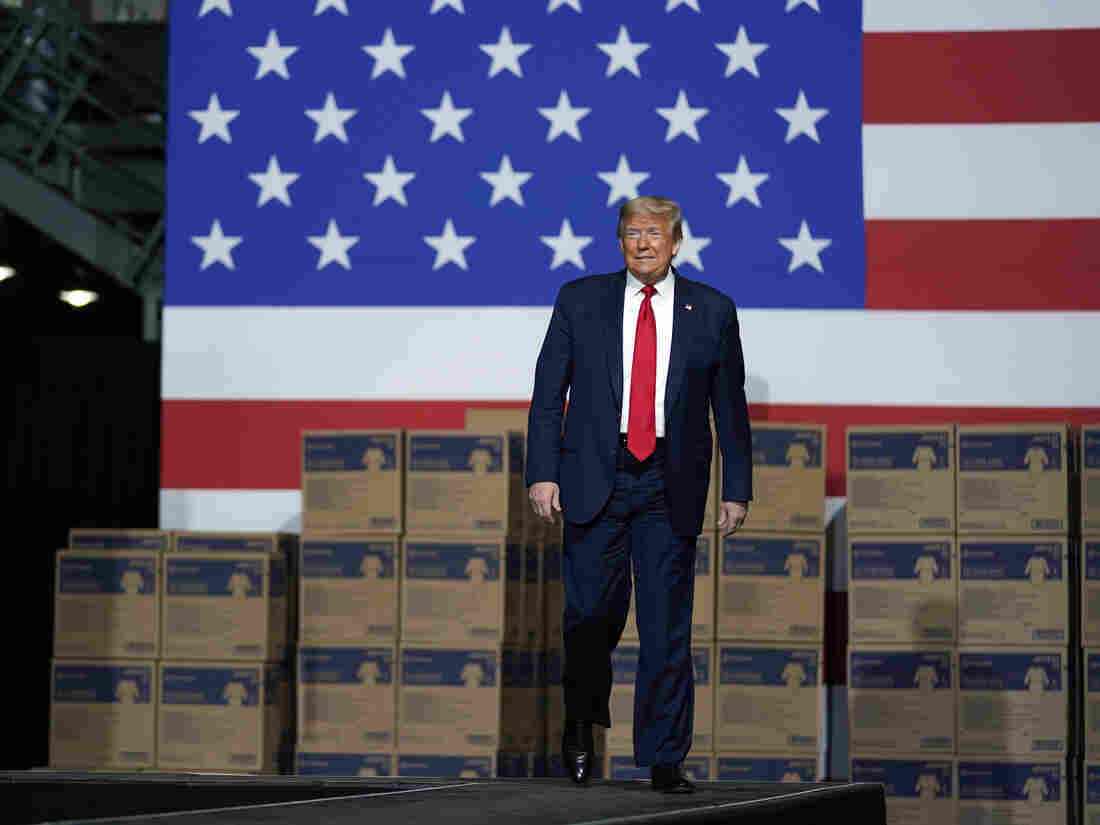 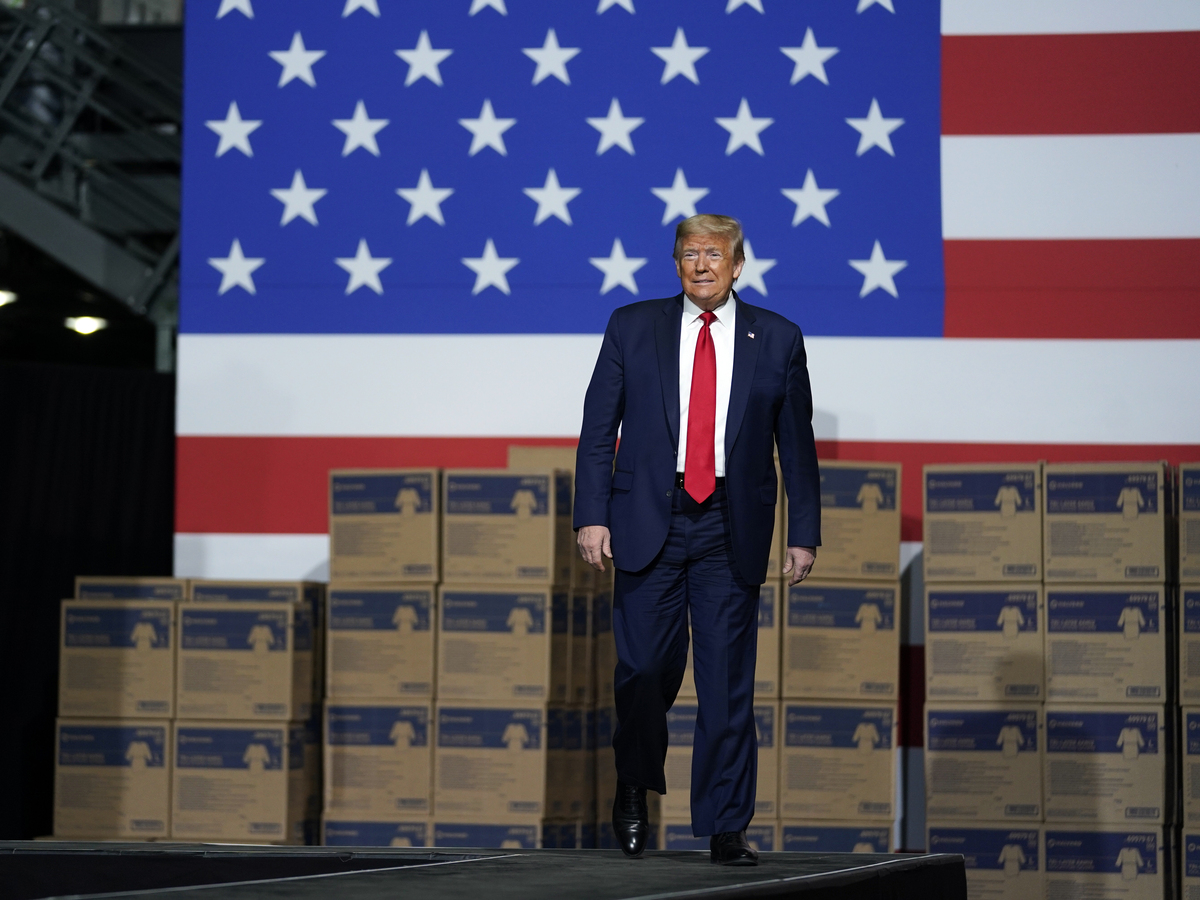 President Trump announces a new role for the Development Finance Corp. in May while touring Owens & Minor Inc., a medical supply company in Allentown, Pa.

The renewed surge in coronavirus cases has left some states once again scrambling to find supplies of masks, gowns, gloves and other medical supplies. The shortages have drawn attention to President Trump's plan to help rebuild the national stockpile of these supplies — a plan that involves a little-known foreign investment agency.

The U.S. International Development Finance Corp. (DFC) is just getting started on its new pandemic assignment. But the fact that it is involved at all is being questioned by some Democratic members of Congress who have called for an independent review of the agency's activities.

They want to know why this new foreign investment agency, which has been up and running for less than a year, needs to be working on this daunting domestic issue.

The agency's mission is to give loans to overseas projects as an alternative to the massive infrastructure investments made by China around the world through its Belt and Road Initiative.

"You have one job already. We want you to do that job well. It's a big job," a Democratic congressional aide told NPR, explaining the challenges of standing up a new agency. "And now the president has an idea and doesn't check with anybody."

Some members of Congress and other Washington insiders were stunned to hear the president tell a group of Pennsylvania factory workers in May that he was giving the Development Finance Corp. a new job.

"This federal agency normally invests in economic development projects in other countries. I said, 'How about investing in our country?' " Trump said.

Trump signed an executive order to empower the agency to operate like a bank, providing loans for projects that help supply the national medical stockpile. That could include loaning money to a company seeking to convert a factory to manufacture items like masks, gloves or gowns.

The money will come from a Defense Production Act fund at the Treasury Department. Congress appropriated $1 billion to that fund as part of the March 27 CARES Act responding to the pandemic. The DFC is working with the Department of Defense on the stockpile issue.

The new focus for the DFC raises several red flags, said George Ingram, who worked on U.S. overseas aid during the Clinton administration.

"The Congress was very clear in rewriting the legislation, in writing the Build Act, in giving the DFC a very strong development mandate that fits in with U.S. foreign policy," Ingram said. "It did not have a domestic mandate."

The DFC absorbed the former Overseas Private Investment Corp and part of the U.S. Agency for International Development. 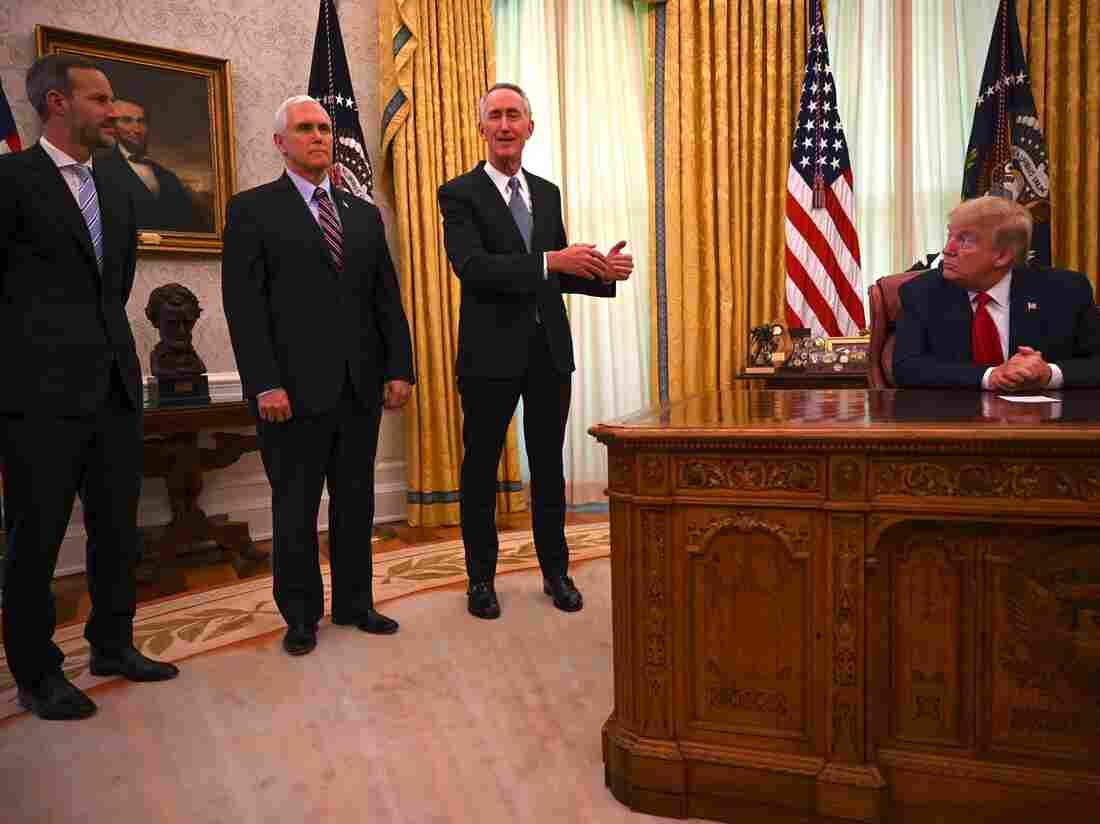 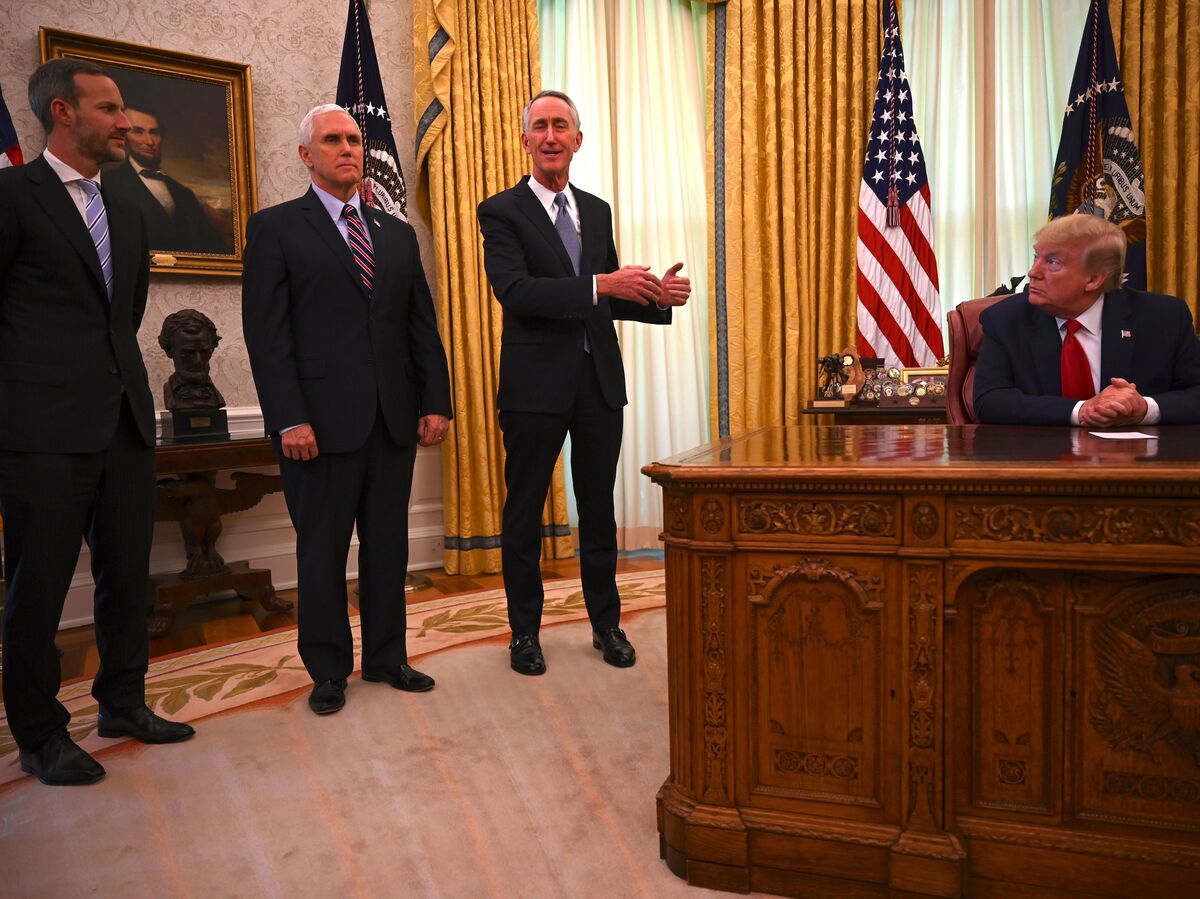 Adam Boehler, chief executive of the DFC, said Trump didn't change the mandate. He just added a domestic element — a temporary one — to help fix a critical problem.

"My view on this is — these are extraordinary times," Boehler told NPR. "Hopefully it's once in a lifetime. And I think everybody, for the most part, understood why we would look to invest domestically."

Boehler brings experience from the private sector, where he started a home health care company before joining the Trump administration as a top official at Health and Human Services. Boehler is a close friend of Jared Kushner, Trump's adviser and son-in-law, and helped the White House coronavirus task force boost ventilator supplies during the early months of the pandemic crisis, when there were fears that hospitals would run short.

Boehler said he hopes to announce the agency's first coronavirus-related investment within a couple of weeks. "Highly likely it'll be in the pharmaceutical manufacturing space," Boehler told NPR.

Senate and House aides told NPR they agree that hospitals and medical professionals need federal help to address the pandemic. But they question why an agency that's just trying to get off the ground is being given such a big job outside its mandate.

Last week, lawmakers in the House of Representatives asked the Government Accountability Office — a nonpartisan watchdog agency — to review the change.

"As the federal government responds to the coronavirus pandemic, it's important that its work is being done efficiently and without impacting other critical functions," said Nita Lowey, chairwoman of the House Appropriations Committee, in a statement to NPR.

"The reports we are mandating in our State and Foreign Operations appropriations bill will help ensure that the U.S. International Development Finance Corporation is able to focus on its core mission of offering an alternative to authoritarian governments that seek to gain influence through state-directed investments and lending. I look forward to seeing what recommendations the GAO puts forward to ensure that this important function is not jeopardized," Lowey said in the statement.

Congress Is Investigating Contracts Tied To Mask And PPE Shortages

Republicans attributed some of the concerns to politics. Rep. Ted Yoho of Florida, who sponsored the bill that created the DFC, said he thinks it's wise for the agency to help secure vital medical supplies.

"Is it an overreach of what they originally intended for?" Yoho said. "People will argue that, but I think it's a smart investment from an American business standpoint to shore up our national security."

Daniel Runde was a top official at the U.S. Agency for International Development during the Bush administration and helped advise on the legislation that created the new DFC. He, too, attributed some of the concerns about the agency's new role to politics — but also said there are real concerns that working on loans for domestic companies will divert attention, people and resources from the agency's long-term objective to respond to China's overseas investments.

Boehler said he has spoken to members of Congress and understands their concerns. But he insisted the domestic work will be kept separate from the foreign role — and said a bigger threat to the agency's core mission is securing enough funding from Congress for its foreign projects.

He said the agency wouldn't drop the ball, noting only about 16 people on the agency's 450-member workforce will be focused on the domestic projects. "It is an extremely manageable portion of my business," Boehler said. 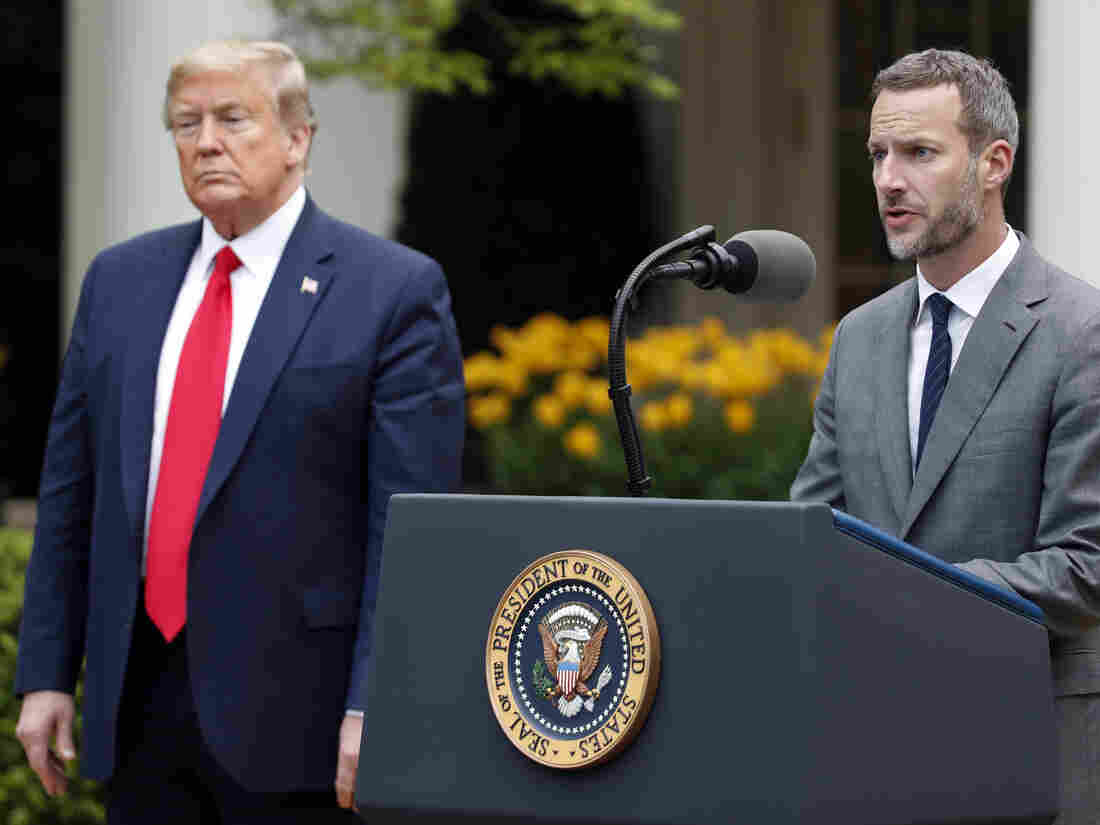 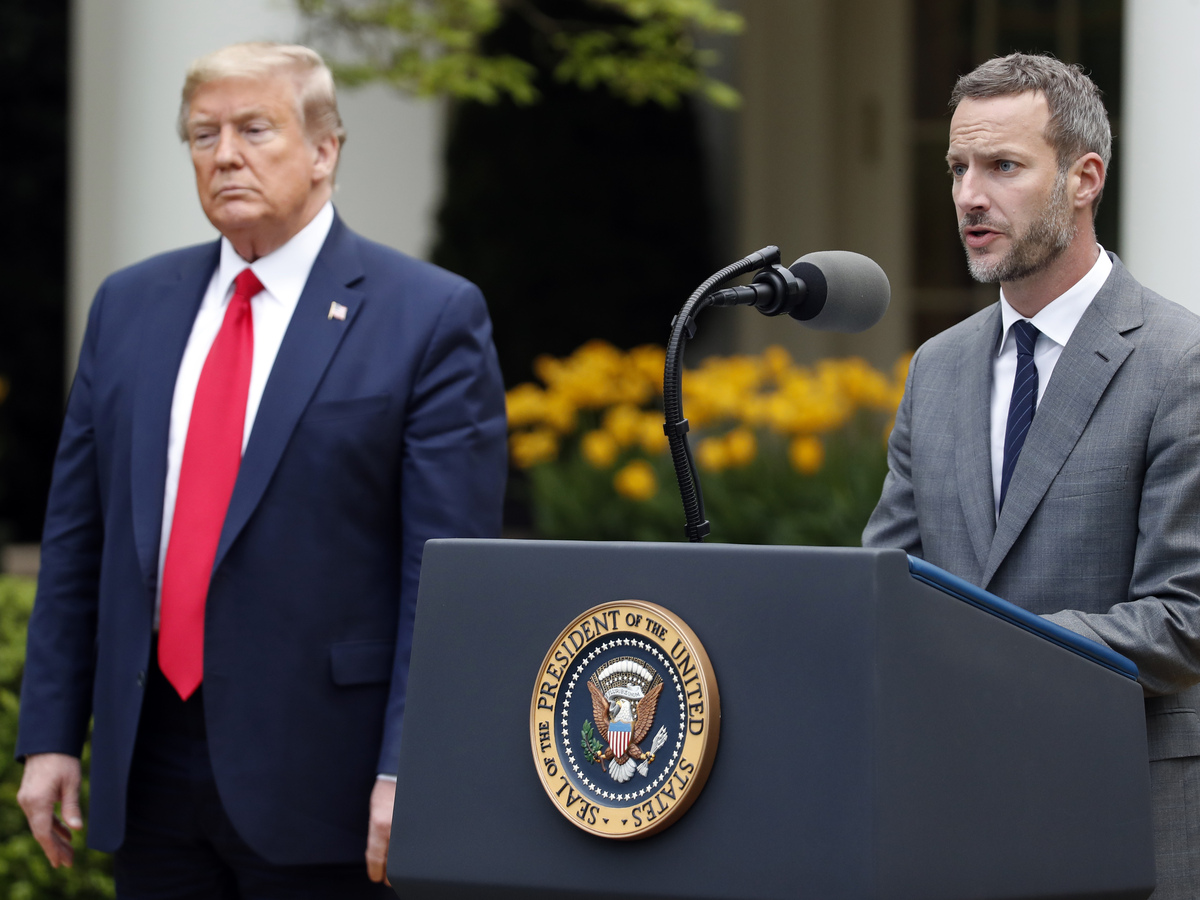 Adam Boehler, CEO of the Development Finance Corporation, speaks about efforts to boost ventilator supplies for coronavirus patients in April.