Accessibility links
Civil Rights Leader John Lewis Never Gave Up Or Gave In The longtime Georgia congressman died Friday of pancreatic cancer. Lewis, who devoted his life to activism and the civil rights movement, was known as "the conscience of the Congress." 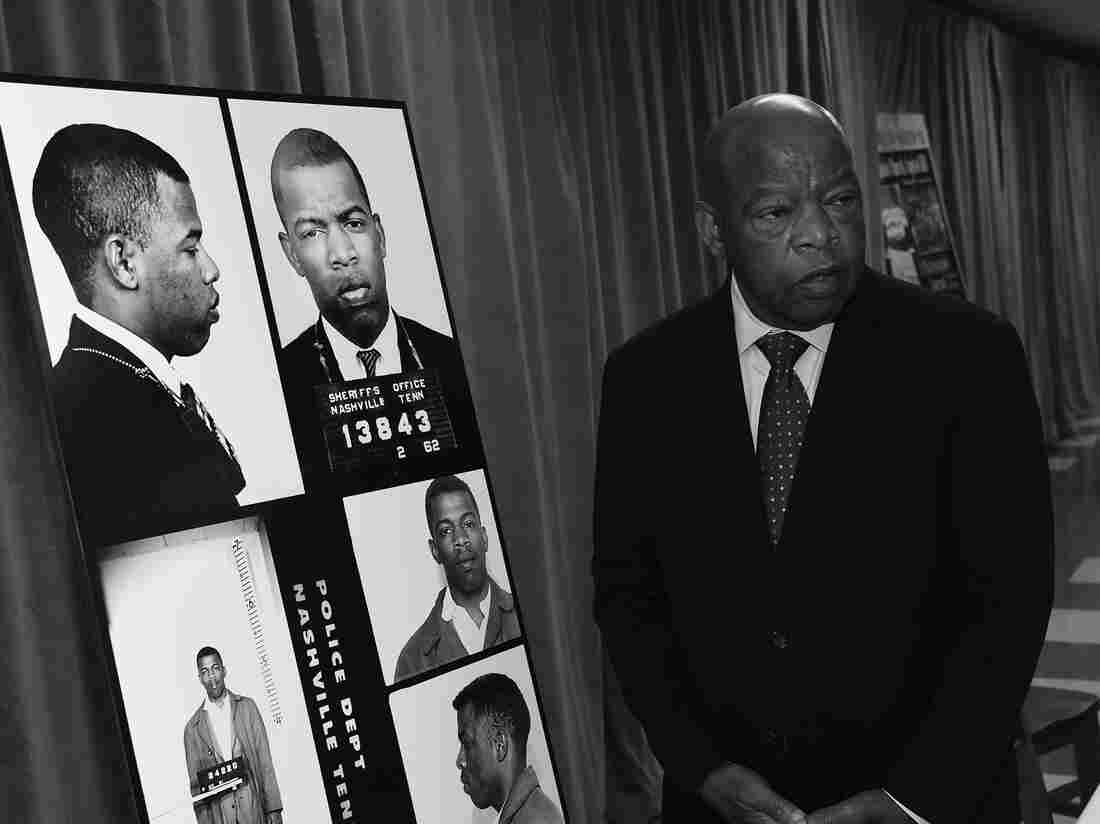 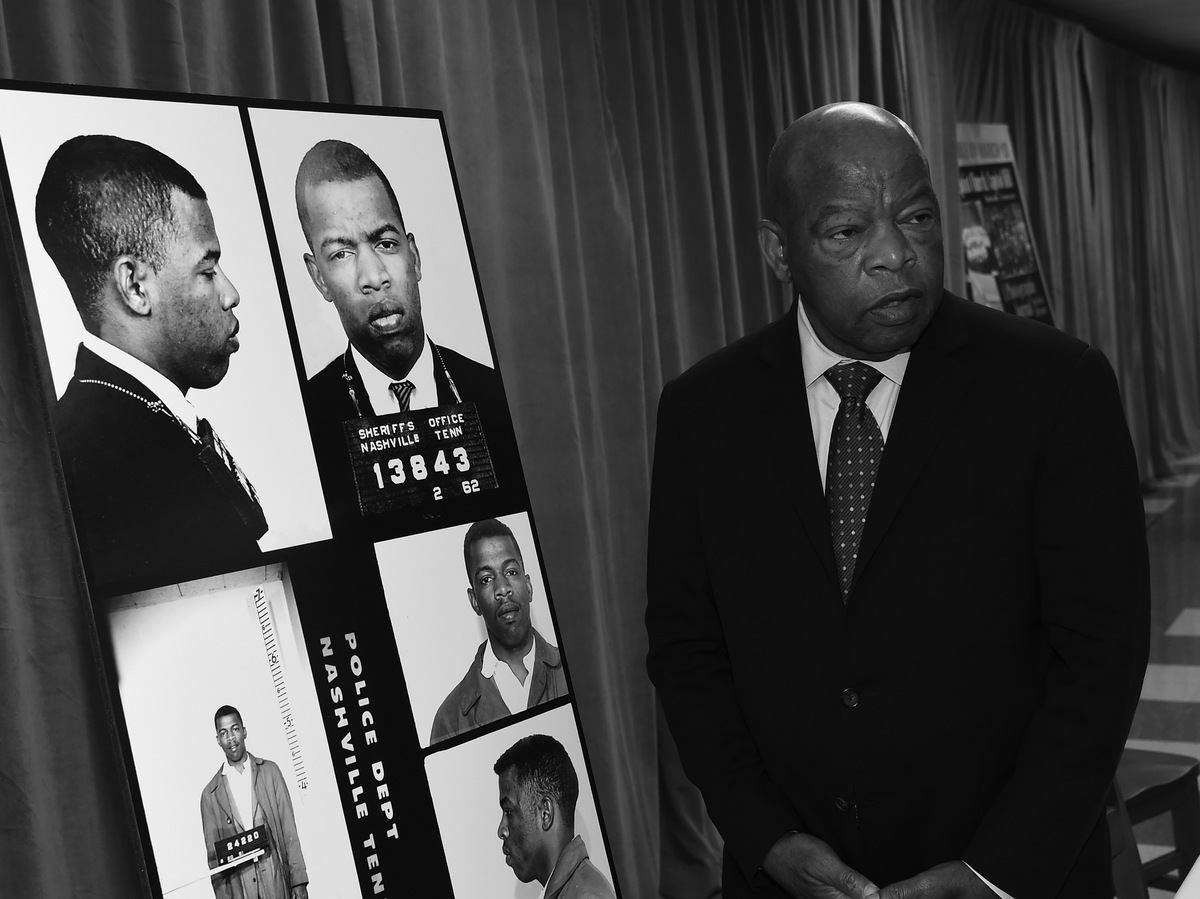 In November 2016, Congressman John Lewis viewed for the first time images and his arrest record from a March 5, 1963, nonviolent sit-in at Nashville's segregated lunch counters.

Civil rights icon and longtime Georgia Congressman John Lewis has died after a battle with stage 4 pancreatic cancer. He was 80 years old.

The son of Alabama sharecroppers, Lewis was a central figure in the key civil rights battles of the 1960s, including the Freedom Rides and the Selma to Montgomery voting rights march.

Lewis considered his native Alabama hallowed ground because of the blood shed there in pursuit of a transformation of America. For decades, the Democrat led bipartisan congressional delegations on annual pilgrimages to major civil rights sites in the state.

On a 1996 trip, Lewis introduced his colleagues to the Rev. Fred Shuttlesworth, a now-deceased leader of the Birmingham movement.

Together, the two sang the old freedom song "I ain't afraid of your jails."

"And they weren't either," Shuttlesworth said.

"Dr. King was speaking to me"

Lewis was arrested more than 40 times protesting segregation. He was involved in lunch counter sit-ins; freedom rides on interstate buses; and he was the youngest speaker at the 1963 March on Washington.

"We're tired of being beaten by policeman. We're tired of seeing our people locked up in jail over and over again," the 23-year-old Lewis said in a speech at the Lincoln Memorial. "We want our freedom and we want it now!"

In a 1998 interview with NPR, Lewis described being attracted to the movement as a teenager when he first heard about the Montgomery Bus Boycott in 1955.

"I knew then that Dr. King was speaking to me and for me and for so many other people who wanted to find a way to get involved in an effort to end racial segregation and discrimination across the South," he said.

"Means and ends are inseparable"

Lewis grew up on a farm in rural southeast Alabama, where his job was to tend to the chicken coops. He'd faced discrimination as a matter of course, often telling the story of how the public library in Troy, Ala., denied him a library card because of his race.

His activism started in Nashville, when Lewis was in college at Fisk University, where he received a bachelor's degree in Religion and Philosophy. He became a leader in SNCC — the Student Nonviolent Coordinating Committee — and was part of a group of young activists studying the philosophy of nonviolence.

"Some of us came to the conclusion that means and ends are inseparable," he said. "If we are going to create the Beloved Community, an open society, if that is our goal, then the means and methods by which we struggle must be consistent with the goal, with the end we seek."

Lewis said it became both a tactic, and a way of living.

He stuck by that creed even in the most brutal of circumstances. Most notably, as a co-leader of the Selma to Montgomery voting rights march.

Sheriffs' deputies and state troopers attacked the peaceful protesters as they tried to cross the Edmund Pettus Bridge over the Alabama River on March 7, 1965.

Standing on the bridge 50 years later, Lewis described facing a "sea of blue" in an interview with NPR.

"They came forward, beating us with nightsticks, tramping us with horses, releasing the tear gas," Lewis recounted. "I was hit in the head by a state trooper with a night stick. My legs went from under me. I thought I was going to die." 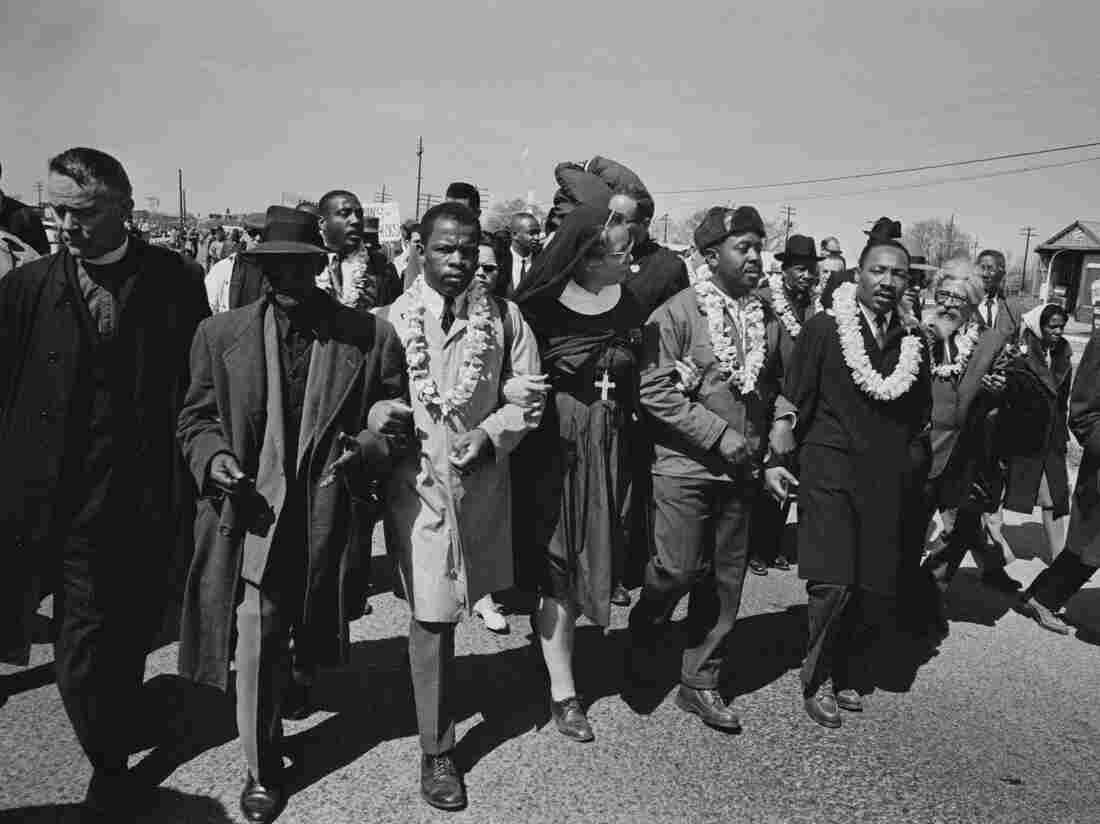 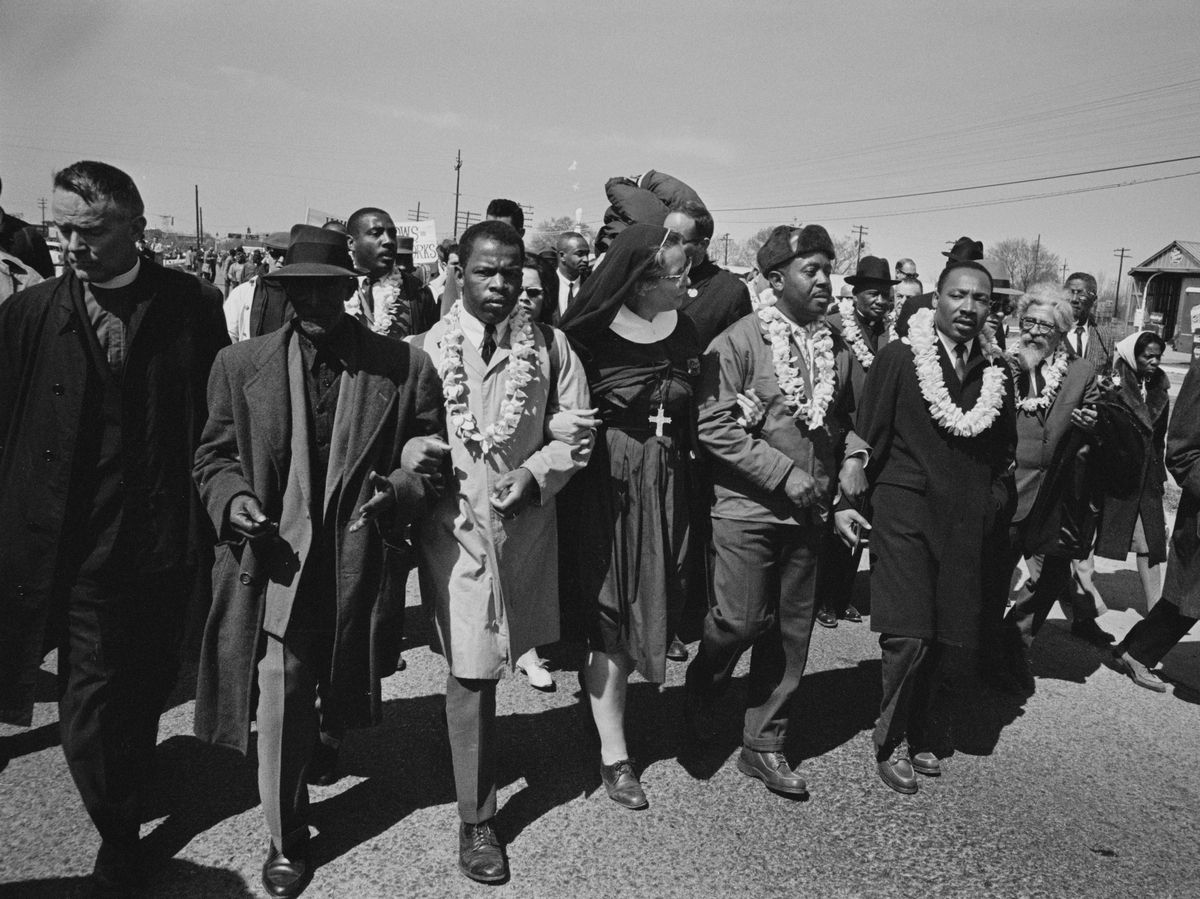 John Lewis (third from the left) joins Rev. Martin Luther King as they begin the march from Selma to Montgomery in March 1965.

At commemorative events in 2015, his sister, Rosa Tyner described being a little girl and watching her brother on the television news.

"My parents would be back at home praying for him," Tyner said. "Now to see the results of all that. My parents have gone on, but if there is any way they are looking down — all the ancestors — they are very proud of him today."

"We still have many bridges to cross"

Lewis served on the Atlanta city council before being elected to Congress in 1986. He rose in Democratic Party ranks to senior chief deputy whip, and became known as "the conscience of the Congress." Lewis was also a critically acclaimed author. His graphic novel trilogy March won a national book award.

During the 2008 presidential primary, Lewis sparked controversy when he abandoned his long-standing endorsement of Sen. Hillary Clinton.

"As a superdelegate to the Democratic Convention next summer, I will be casting my vote for Barack Obama," he said at the time. 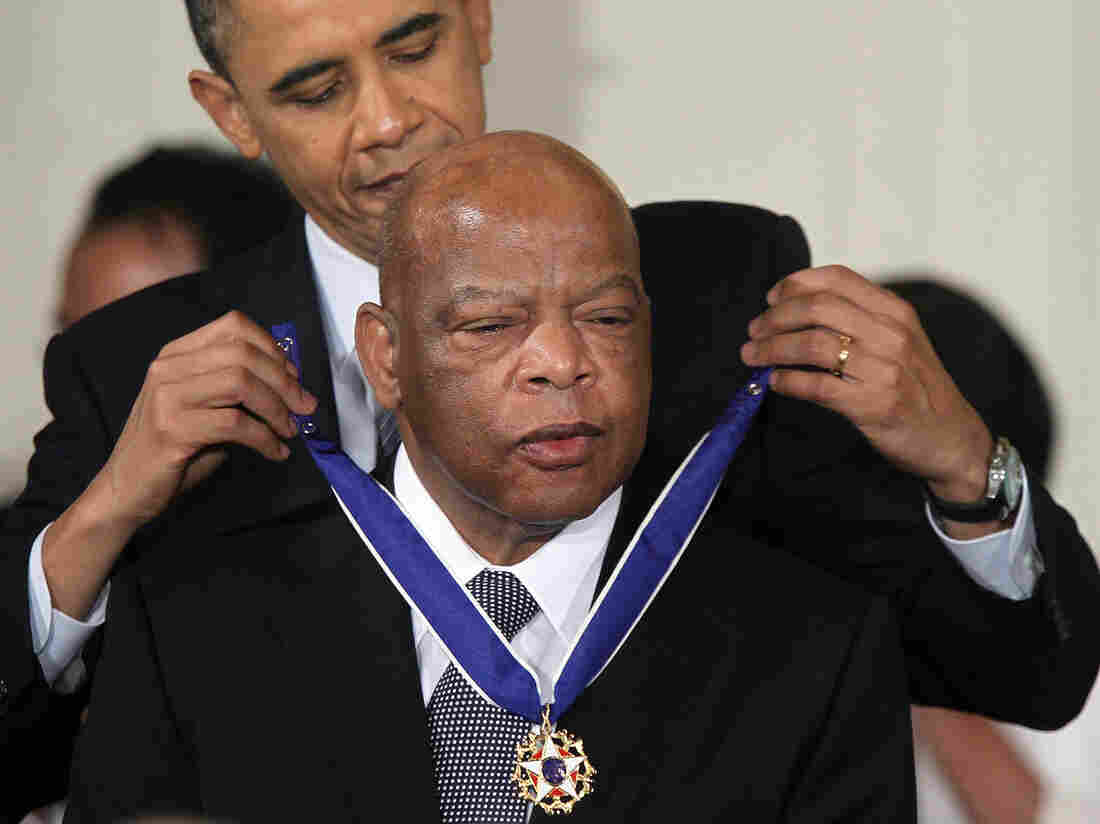 Rep. John Lewis is presented with the 2010 Medal of Freedom by President Barack Obama on Feb. 15, 2011. The medal is the highest honor awarded to civilians. Alex Wong/Getty Images hide caption 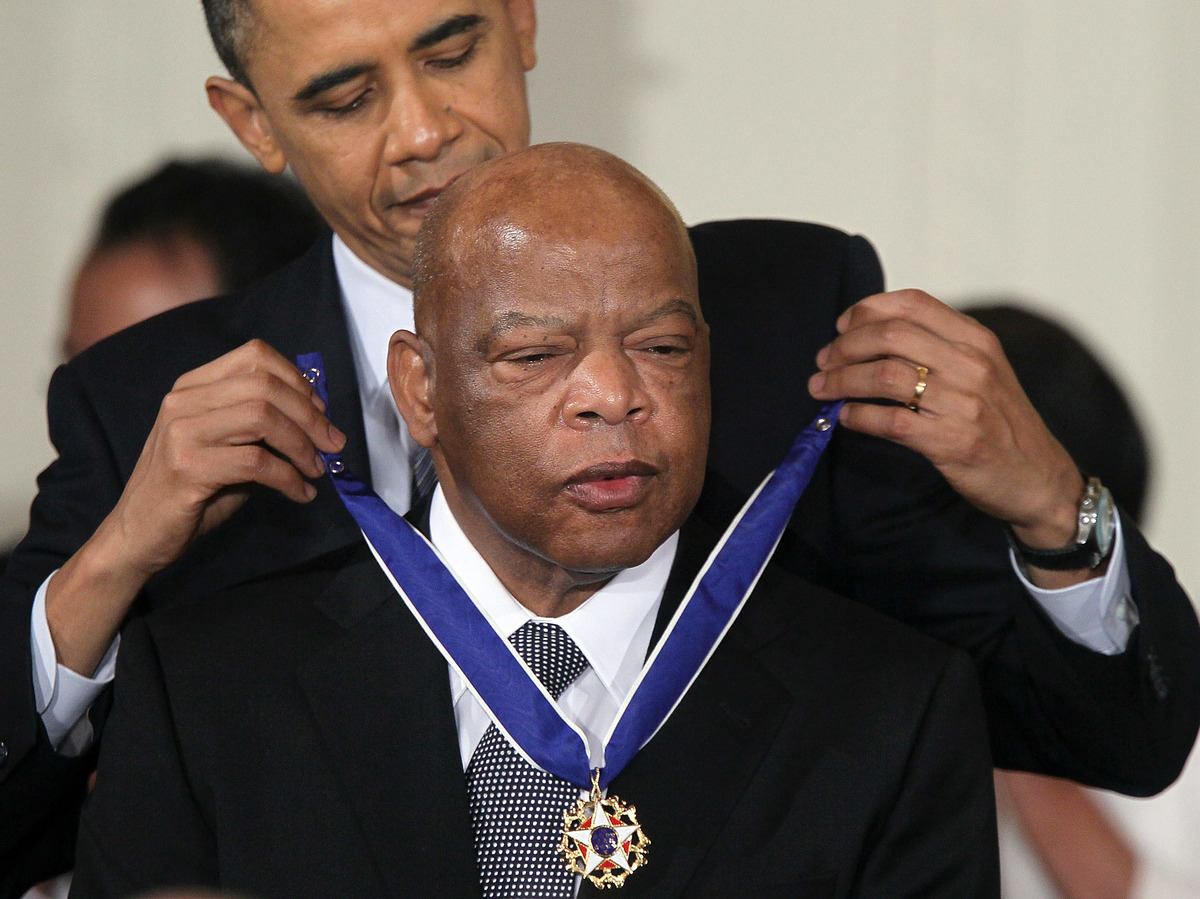 Rep. John Lewis is presented with the 2010 Medal of Freedom by President Barack Obama on Feb. 15, 2011. The medal is the highest honor awarded to civilians.

Later, he helped usher passage of President Obama's Affordable Health Care Act in the House, and Obama awarded him the Presidential Medal of Freedom.

In 2016, Lewis actively campaigned for Democrat Hillary Clinton, and after she lost, he refused to attend President Trump's inauguration, citing Russian interference in the election.

"I don't see the president-elect as a legitimate president," he said on NBC's Meet the Press.

Lewis was critical of Trump's nomination of former Alabama Sen. Jeff Sessions as attorney general, saying at a congressional hearing, "We need someone as attorney general who is going to look out for all of us, not just some of us."

His fighting spirit never waned, even in the face of advanced pancreatic cancer.

"I am going to fight it and keep fighting for the Beloved Community," he said in a statement revealing his diagnosis in December 2019. "We still have many bridges to cross."

Three months later, even as the nation was confronting the coronavirus pandemic, Lewis made a surprise appearance at a reenactment of the bridge crossing in Selma in March 2020.

Surrounded by a crowd of marchers, Lewis urged younger generations to take up the mantle to "help redeem the soul of America."

"Keep the faith," he said. "Keep our eyes on the prize. We must go out and vote like we've never ever voted before."