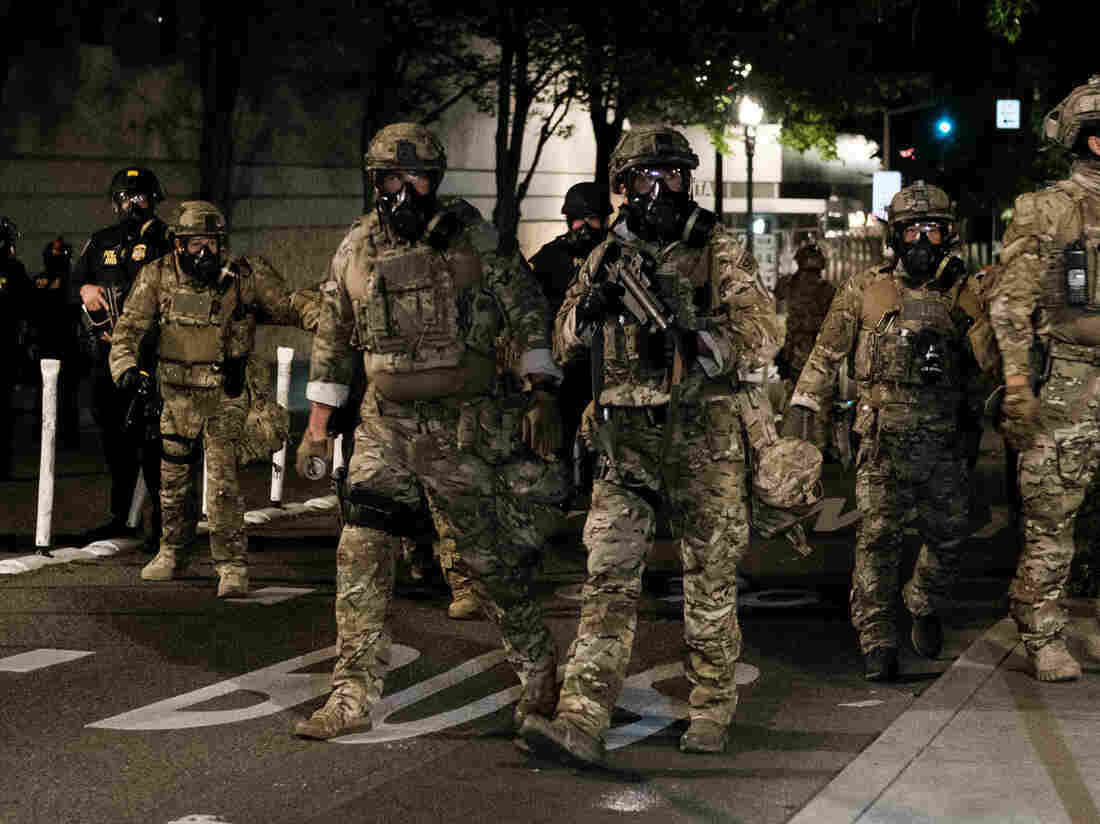 Federal officers prepare to disperse the crowd of protesters outside the Multnomah County Justice Center on July 17 in Portland. The use of federal agents has only made a bad situation worse, state and local officials told NPR. Mason Trinca/Getty Images hide caption 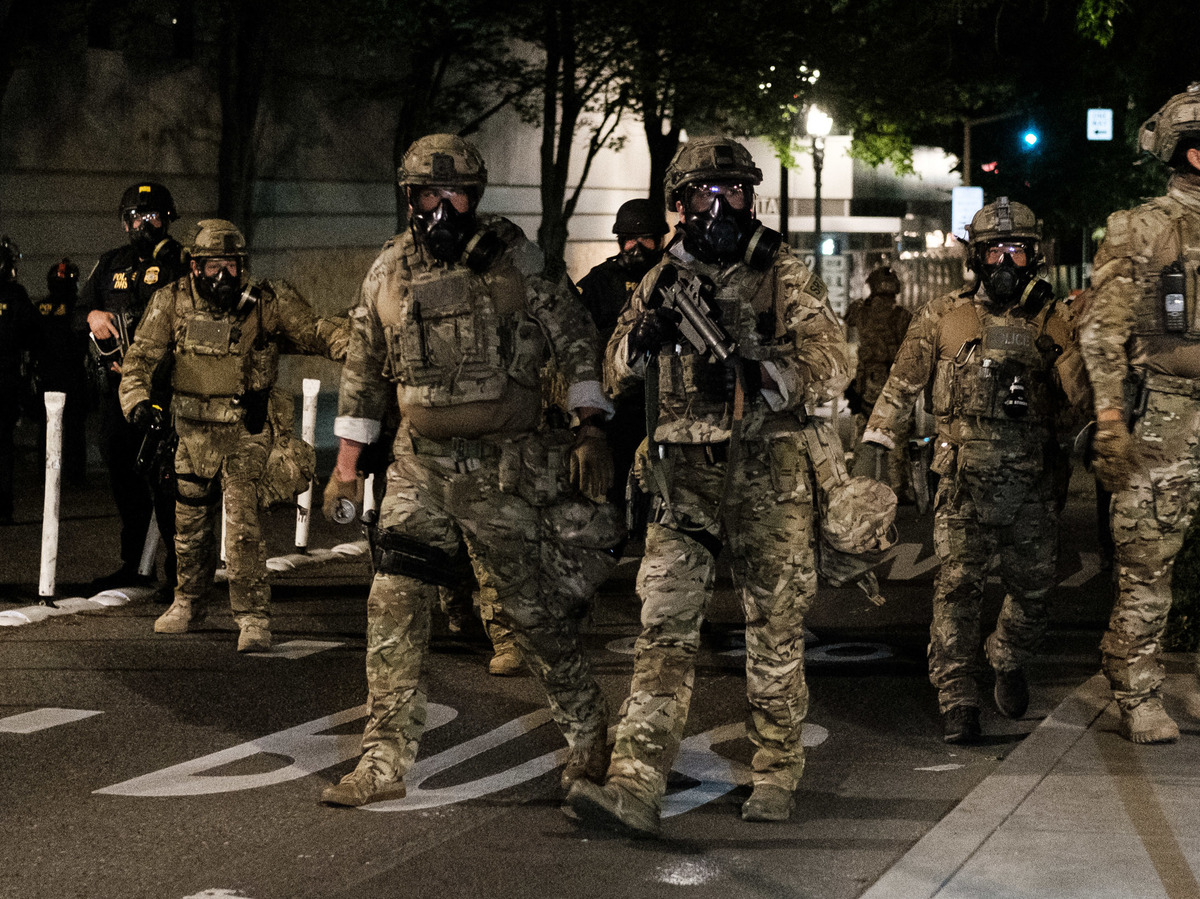 Federal officers prepare to disperse the crowd of protesters outside the Multnomah County Justice Center on July 17 in Portland. The use of federal agents has only made a bad situation worse, state and local officials told NPR.

Oregon officials are lashing out at President Trump for sending federal agents into Portland amid the ongoing protests against police brutality and racism. Both the governor and Portland's mayor told NPR the administration's actions are nothing more than political theater meant to appeal to Trump's political base in an effort to win reelection.

"As best as I can tell, this is an effort — a last gasp effort — by a failed president with sagging polling data, who's trying to look strong for his base," Mayor Ted Wheeler told NPR's Lulu Garcia-Navarro on Sunday. "He's actually using the federal police function in support of his candidacy."

For more than 50 nights, hundreds have gathered in the city's downtown to protest racism and police brutality, following the killing of George Floyd. Last week Oregon Public Broadcasting reported that federal agents wearing camouflage and tactical gear had been pulling some protesters into unmarked vans.

OPB: 50 Days Of Protest In Portland. A Violent Police Response. This Is How We Got Here.

In response, the state of Oregon said it would sue the U.S. Department of Homeland Security and other federal law enforcement agencies. And multiple Democratic members of Congress demanded internal government watchdogs investigate the Trump administration's "use of violent tactics" against peaceful protesters.

Portland's mayor, Oregon's governor and both of the state's U.S. senators have said federal agents aren't needed to deal with the civil unrest. Gov. Kate Brown has asked the Trump administration and the head of DHS to take their federal officers off the streets of Portland. "The Trump administration needs to stop playing politics with people's lives," Brown told NPR's Michel Martin. "We don't have a secret police in this country. This is not a dictatorship. And Trump needs to get his officers off the streets."

In a tweet, Trump blamed Portland's officials for failing to control the situation. "We are trying to help Portland, not hurt it," Trump said. "Their leadership has, for months, lost control of the anarchists and agitators. They are missing in action. We must protect Federal property, AND OUR PEOPLE. These were not merely protesters, these are the real deal!"

State and local officials say that the situation in Portland had been improving over several weeks. Speaking to Weekend Edition, Wheeler called the federal government's actions an "attack on democracy" that inflamed an already tense situation. Among the protesters, a "small handful" were engaging in criminal activity, Wheeler said, but "it was dissipating. It was calming down."

Sending in federal forces merely exacerbated the situation, they said.

"It's simply like adding gasoline to a fire," Gov. Brown said. "What's needed is de-escalation and dialogue. That's how we solve problems here in the state of Oregon."

Protests continued Saturday night, with federal officers deploying tear gas and using batons to try to disperse the crowd gathered at the federal courthouse in downtown Portland. In North Portland, another group of demonstrators gathered and chanted outside the Portland Police Association Building. Some broke into the building and set a fire at the police union headquarters. Portland police called the gathering a riot.

Portland Police Deputy Chief Chris Davis has blamed the violent incidents on a small group of protesters with "criminal" tendencies, who are "motivated by an anarchistic ideology."

Despite the animus shown by state and local officials toward the federal response, Portland's police joined forces with them Saturday night, working together to make arrests and clear the streets. Portland City Council member Jo Ann Hardesty criticized local police, saying they had "joined in the aggressive clampdown of peaceful protest." Hardesty also criticized Wheeler for not sufficiently controlling the city's law enforcement.

It's not the first time local police have been accused of teaming up with federal agents. The Portland Mercury reported that the president of Portland's police union met with the acting DHS chief and federal officials on Thursday.

Speaking to NPR, Wheeler said Portland residents can't always tell the difference between local police officers, county deputies, state patrol or federal law enforcement. On Friday night after federal police started tear gassing people, "about 300 people came to my house and wanted to know why I allowed our police officers to gas people." Wheeler hadn't authorized it; it was federal law enforcement. "But it's a distinction without a difference in the eyes of the public."

In nearly seven weeks of nightly demonstrations, Portland police "have done many things right and they've done some things wrong as well," Wheeler said. But local law enforcement has clear policies and directives, complaint processes, independent accountability and a review system, he added.

"With the federal government, they won't even identify who they are," Wheeler said. "We don't know why they're here, we don't know the circumstances under which they're making the arrests, we don't know what their policies are or what accountability mechanisms there are."

Oregon's U.S. attorney has called for an investigation into the tactics of some of the federal agents.

"Last month, the Administration tear-gassed peaceful protestors in Washington, D.C.," Pelosi and Blumenauer said. "Now, videos show them kidnapping protestors in unmarked cars in Portland – all with the goal of inflaming tensions for their own gain. While Portland is the President's current target, any city could be next.

"We live in a democracy, not a banana republic," they added. "We will not tolerate the use of Oregonians, Washingtonians – or any other Americans – as props in President Trump's political games. The House is committed to moving swiftly to curb these egregious abuses of power immediately."

"The Attorney General of the United States does not have unfettered authority to direct thousands of federal law enforcement personnel to arrest and detain American citizens exercising their First Amendment rights," they wrote. "The Acting Secretary [of Homeland Security] appears to be relying on an ill-conceived executive order meant to protect historic statues and monuments as justification for arresting American citizens in the dead of night."

To Gov. Brown, the deployment of federal officers is "a mere distraction from the president's failure to lead this nation through a global pandemic," she said on Weekend All Things Considered. "It is a blatant abuse of power by the federal government. They are inappropriately trained. Their presence is not needed. And frankly they're exacerbating an already challenging situation. It is absolutely counterproductive to the work we're trying to do here."