Accessibility links
Quieter Oceans During Pandemic Give Marine Life A Break A drop in shipping traffic is reducing underwater noise, so scientists are listening for how whales and other marine life are responding.

Whales Get A Break As Pandemic Creates Quieter Oceans

Whales Get A Break As Pandemic Creates Quieter Oceans 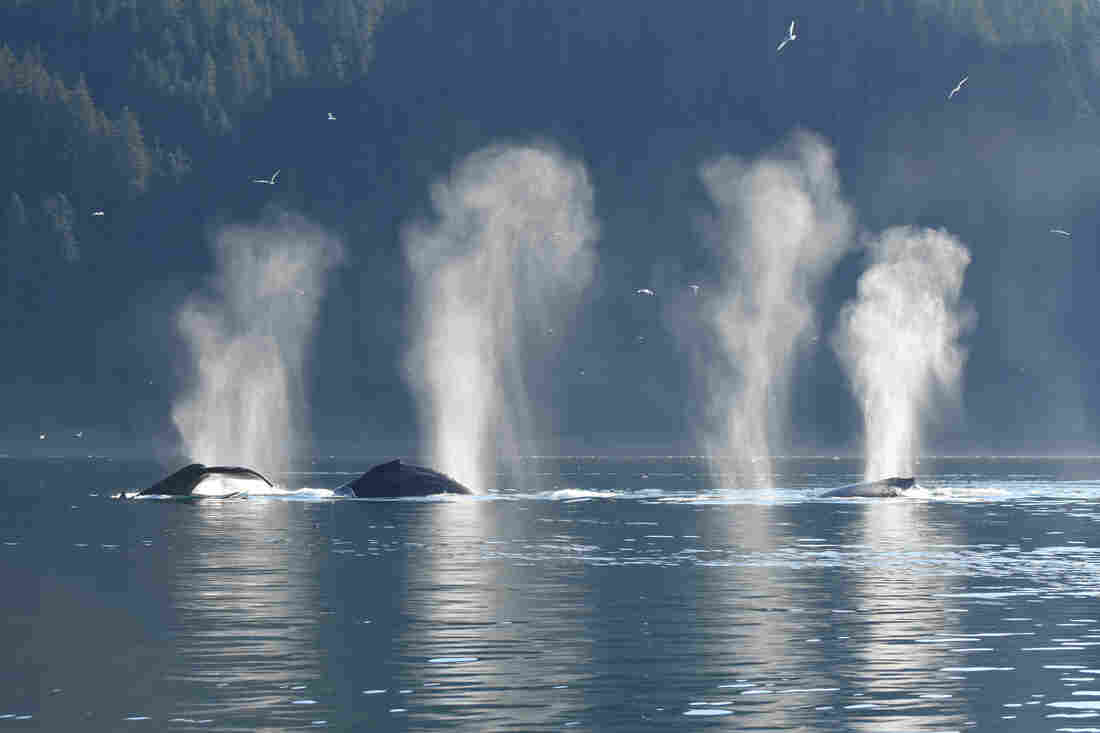 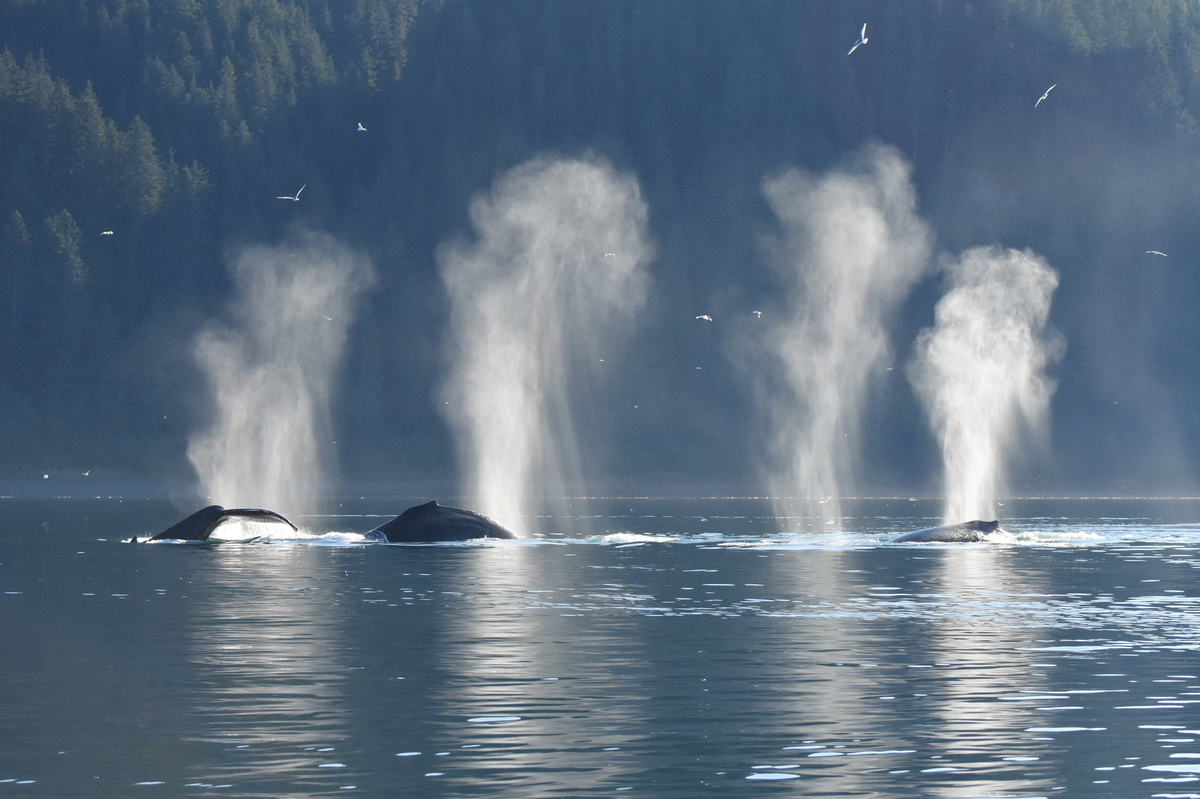 When humpback whales migrated to Glacier Bay in Alaska this year to spend the long summer days feeding, they arrived to something unusual: quieter waters.

As the COVID-19 pandemic slows international shipping and keeps cruise ships docked, scientists are finding measurably less noise in the ocean. That could provide momentary relief for whales and other marine mammals that are highly sensitive to noise.

Through networks of underwater hydrophones, scientists are hoping to learn how the mammals' communication changes when the drone of ships is turned down, potentially informing new policies to protect them.

"More needs to be done," says Jason Gedamke, who manages the ocean acoustics program at NOAA Fisheries. "When you have animals that for millions of years have been able to communicate over vast distances in the ocean, and then once we introduce noise and have increased sound levels and they can't communicate over those distances, clearly there's going to be some impact there."

While many scientists have canceled field work this year because of the pandemic, wildlife biologists in Glacier Bay National Park have kept it up by taking solo boat trips to track the humpback population. The data they collect --counting and identifying whales — continues record-keeping that goes back 35 years.

"One of the groups is a mother and calf," says wildlife biologist Christine Gabriele, as she watches whales surface on a cool May morning. "Our seventh for the year. So that's really good news."

These humpbacks are still recovering from a stretch of bad years when few calves were born. In the Pacific, warmer ocean temperatures known as "the blob" dramatically disrupted the food web. This year, the signs are more encouraging. Gabriele can tell because she recognizes individual whales, especially the ones that have been returning for decades.

"They're really homebodies," she says. "They go back to the same feeding spots year after year."

But below the surface, Gabriele and her colleagues are learning far more with a hydrophone, continually recording the underwater soundscape. Humpbacks are a chatty bunch. In addition to their well-known, melodious songs, they make "whups" and other noises, either to coordinate feeding or simply to stay in touch with each other. Sound can travel for miles underwater, sometimes hundreds of miles, much farther than a whale can see.

"Whales use sound in almost every aspect of their daily life," she says. "Studying the underwater sound environment is really important because it helps us see the world the way the whales actually use it."

The whales also share Glacier Bay with cruise ships, boats and catamarans, which are regulated to limit their numbers. When vessel noise is loud, Gabriele and her colleagues found that the whales have to accommodate it, a lot like people would at a loud party.

But this year, boat traffic has been way down.

"It's much quieter," Gabriele says. "Just by listening to it you can tell."

An analysis from Cornell University found the loudest sounds underwater in Glacier Bay in May 2020 were less than half as loud as those in May 2018. So, Gabriele and her team are eagerly listening to humpback calls to see how they might change.

"The pandemic has created this unexpected opportunity for science, kind of a once in a lifetime chance to look at whale communication behavior in its natural, undisturbed form," Gabriele says.

Scientists are finding the same trend around the world. In the waters near Vancouver, researchers found that underwater noise in April was only half as loud as the loudest sounds a few months prior.

"Even my mom said 'it's kind of obvious, don't you think, less ships, less noise?'" says David Barclay, an assistant professor at Dalhousie University who authored the study. "It's always hard when you get roasted by your mom."

The amount of cargo handled by the Port of Vancouver dropped in February and March, but Barclay says he's still sorting out how that affected ship traffic. Cargo ships may have been smaller than normal or traveled at different speeds. Local ferry traffic has also decreased because of the pandemic.

The drop in noise could be helpful for endangered killer whales that live in the area, known as Southern Resident killer whales, which rose to national attention two years ago when a mother orca carried her dead calf for days.

The whales use sound to hunt Chinook salmon through echolocation, much like a bat does. They also make a wide array of social sounds. Each pod actually has its own distinct dialect of calls. But ships make noise at some of the same sound frequencies as the whales.

"These animals are very acoustic," says Brad Hanson of NOAA's Northwest Fisheries Science Center. "Our concern is that there's a masking of their clicks for echolocating."

Chronic noise underwater has also been shown to cause stress in whales. After the Sept. 11, 2001, terrorist attacks, when shipping traffic also dropped, researchers measured a drop in stress hormones in right whales on the East Coast.

"As ocean noise has decreased, we're hoping that stress in animals has gone down," says Barclay. "A positive thing for everyone, right?"

"Right now, there may be some break that fish and whales and other marine life might be getting, but we have to look forward to what happens afterward," says Michael Jasny with the marine mammal protection program at the Natural Resources Defense Council. "There are 60,000 or more commercial vessels on the water at any given time. And the sounds produced by all those vessels create what scientists describe as an 'oceanic smog.'"

Around the country, a handful of pilot programs are working to reduce ocean noise. At the Port of Vancouver, vessels can receive a large discount on their berthing fees if they participate in noise reduction in areas where endangered killer whales are found.

Under the ECHO program, 82% of ships slowed down in critical areas in 2019, which reduces the noise they produce. Ships can also get credits if they retrofit their vessels to reduce noise, including altering or replacing their propellers or making other adjustments.

Jasny says more needs to be done in other locations or by ensuring ships are designed to reduce their noise levels when they're first built.

"Shipping is a global industry and we're not seeing that global commitment to change," says Jasny.

In the coming months, scientists are hoping what they learn about whale behavior during this momentary quiet will lead to a better understanding of how noise affects them.

Says Gedamke, "There's certainly some real results from this that could lead us to important decisions about how we manage these species." 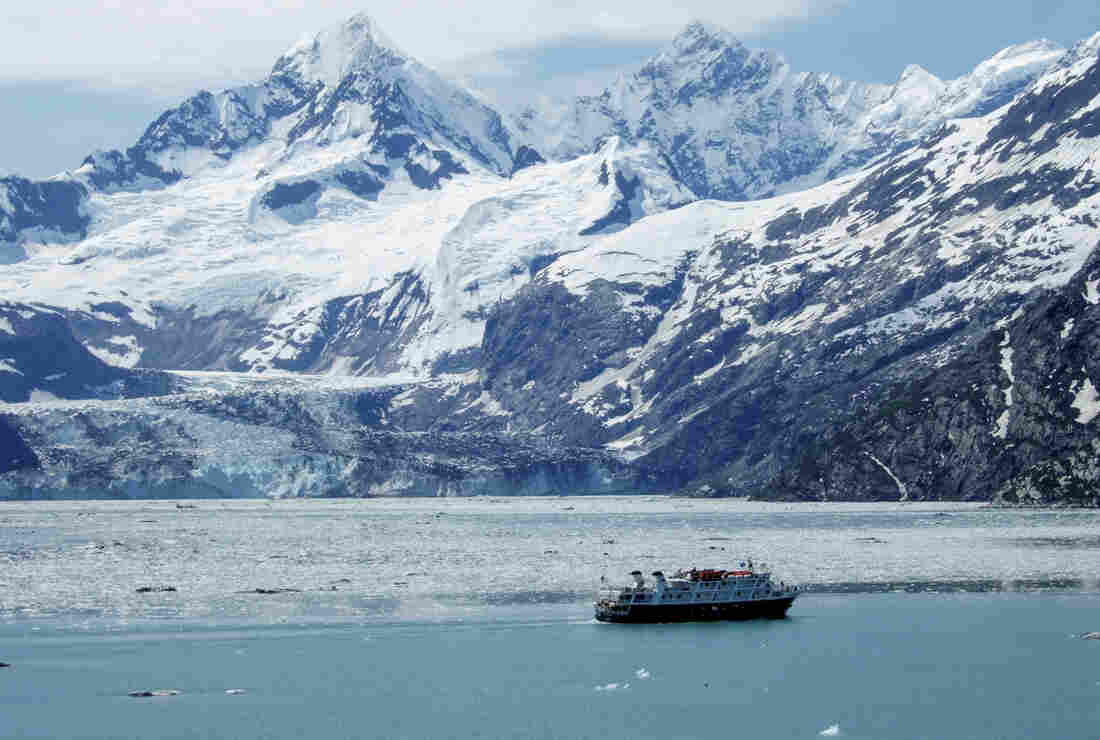 As fewer visitors on ships tour Glacier Bay National Park, scientists are studying what effect this is having on whales' communication, potentially informing new policies to protect them. National Park Service hide caption 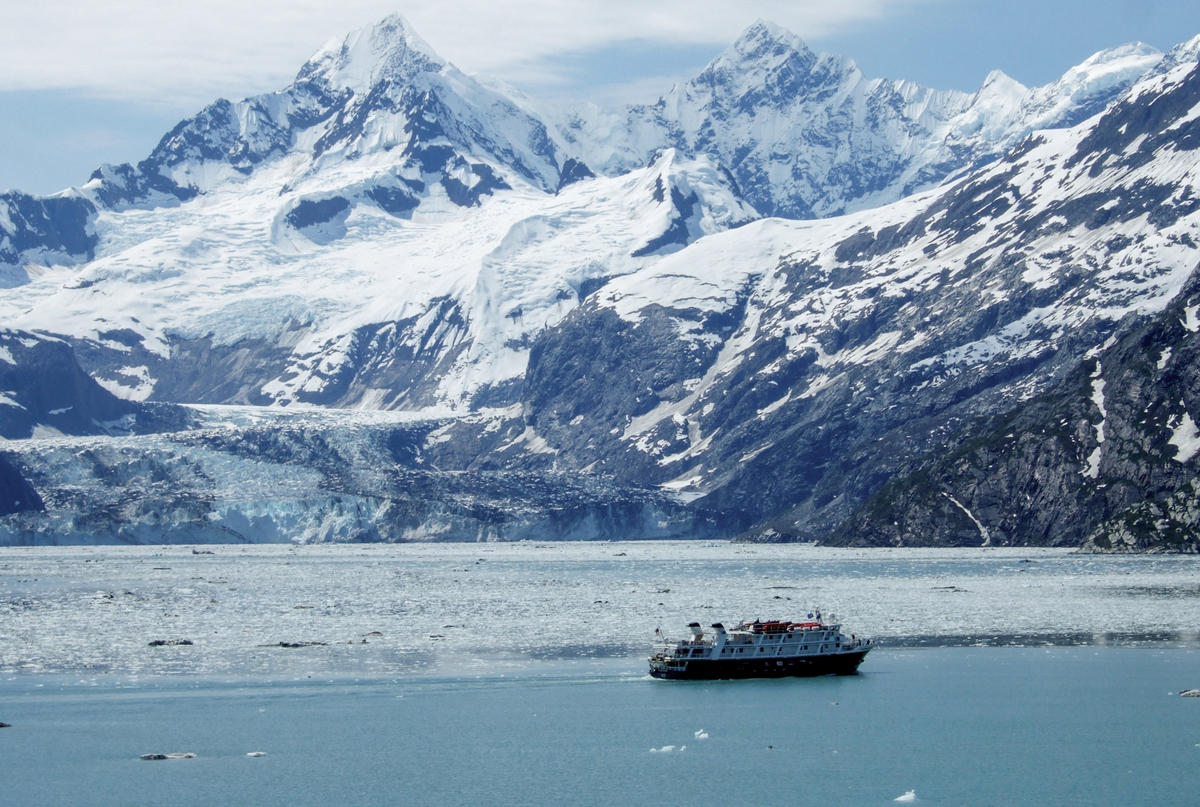 As fewer visitors on ships tour Glacier Bay National Park, scientists are studying what effect this is having on whales' communication, potentially informing new policies to protect them.

This story was designed and developed by NPR's Audrey Carlsen, Alyson Hurt and Daniel Wood and produced by Ryan Kellman.