Accessibility links
Reading The Game: Wolfenstein II Our occasional series on storytelling in video games returns with a look at The New Colossus, a surprisingly heartfelt entry in the classic Castle Wolfenstein series. (Yes, you still shoot Nazis.) In Wolfenstein II: New Colossus, our hero B.J. Blazkowicz has grown into far more than a couple of chunky pixels — but he still kills a lot of Nazis. Bethesda Softworks hide caption In Wolfenstein II: New Colossus, our hero B.J. Blazkowicz has grown into far more than a couple of chunky pixels — but he still kills a lot of Nazis.

In the beginning, B.J. Blazkowicz, hero of the Castle Wolfenstein series, was just a rough collection of pixels that excelled at exactly one thing: killing Nazis.

He was blocky, chunky, flat. A spy tasked with escaping imprisonment by the German army during WWII. Back in 1981, in his first top-down, DOS incarnation, B.J. didn't even have a name. He certainly had no story. Narrative investment in videogames is a relatively recent development — a function of time, technology and maturation of the art form; the difference between cave paintings and Breaking Bad. But for B.J. back then, there was just him, a Mauser pistol, some hand grenades and Nazis to kill.

And that was enough. Over the course of games upon games, B.J. has been retconned and remade. With each succeeding generation of technology, sergeant Blazkowicz (and the world he inhabits) has become rounder, grittier, more complex, spawning alternate-alternate histories and radical re-imaginings where B.J. fights his way across Castle Wolfenstein, Germany, Austria, Poland, England and the moon. Using everything from his bare hands to laser cannons, he kills every Nazi he sees. He kills their dogs. He kills giant, dieselpunk Nazi mecha and Nazi zombies. But B.J. himself is not much different: A white guy with a gun, deathless and simple, who hates Nazis because Nazis are bad. Establishing their badness requires no narrative explanation and murdering them by the zeppelin-load comes with no attendant guilt or dissonance because they're, you know, Nazis. And killing Nazis is what Americans are supposed to do.

But Wolfenstein II: The New Colossus is different. It is still a wild fantasy of Nazi fighting — a shooter driven by the constant machine gun chatter of ending lives for a righteous cause — but it also stands as a surprisingly deep and heartfelt deconstruction of the White American Gun-Bro.

That species, so ever-present in modern video gaming, can rightfully and reasonably claim Sergeant Blazkowicz as its progenitor. Thousands of dumb, hulking bullet-hoses have taken after him over the years. He has spawned generations. And New Colossus expends a considerable weight in pixels asking why.

'The New Colossus' is different. It is still a wild fantasy of Nazi fighting — a shooter driven by the constant machine gun chatter of ending lives for a righteous cause — but it also stands as a surprisingly deep and heartfelt deconstruction of the White American Gun-Bro.

It begins with the ever-ready hero worn out. After nearly eating a hand grenade at the conclusion of the last installment, New Colossus opens with B.J. on the ground with his guts falling out, surrounded by friends and heroes from past stories, the propwash from a nick-of-time helicopter rescue churning the air.

B.J. sleeps, near comatose. We see flashes of lucidity — his comrades trying to keep him alive, his girlfriend (fellow resistance fighter Anya Oliwa) pregnant with twins. And when he does finally wake up (straight into another battle, natch), his body is so ruined that he fights through the first level of the game in a wheelchair.

As a matter of fact, bloody and vengeful as it is, the entire first half of the game is essentially a meditation on endings because all through it, B.J. is dying — slowly but undeniably. He knows he won't be there to see his children born. But he fights anyway. Because the resistance needs new blood (gotten in the form of moonshine preacher Horton Boone and the awesome Grace Walker, leader of a group of mostly Black resistance fighters operating in the radioactive ruins of Manhattan) and because there are Nazis that still need killing.

Look, this series — Reading The Game — is about storytelling. Often, it is about the tricks, gimmicks and switcheroos pulled by videogame writers that highlight narrative potential only possible in the malleable universe of player-driven stories. Sometimes it is about the failures of the medium. Occasionally it is about one-of-a-kind genius.

New Colossus? It has all of those. It is a thesis on surprise, on twist, on melding the bonkers with the sublime. It is a powerful political statement on American fascism, a revolutionary fantasy, a murder simulator and a ridiculous, over-the-top romp all at the same time. It is an exploration of loss and regret wrapped in the costume of a bloody shooter. 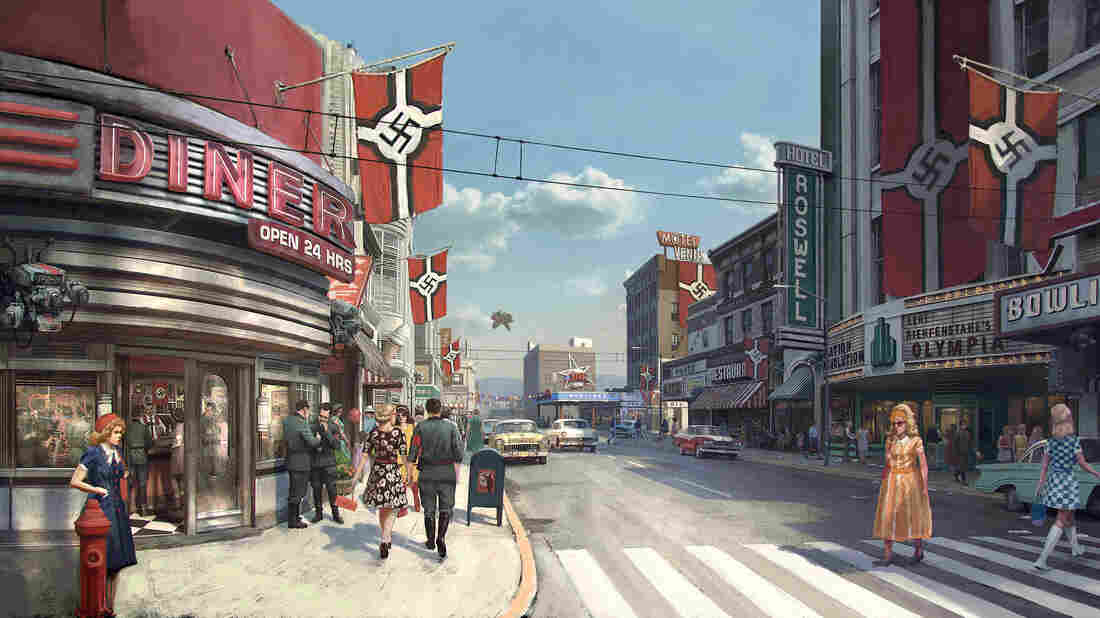 The New Colossus digs into B.J.'s childhood in a small Texas town after the war. Bethesda Softworks hide caption 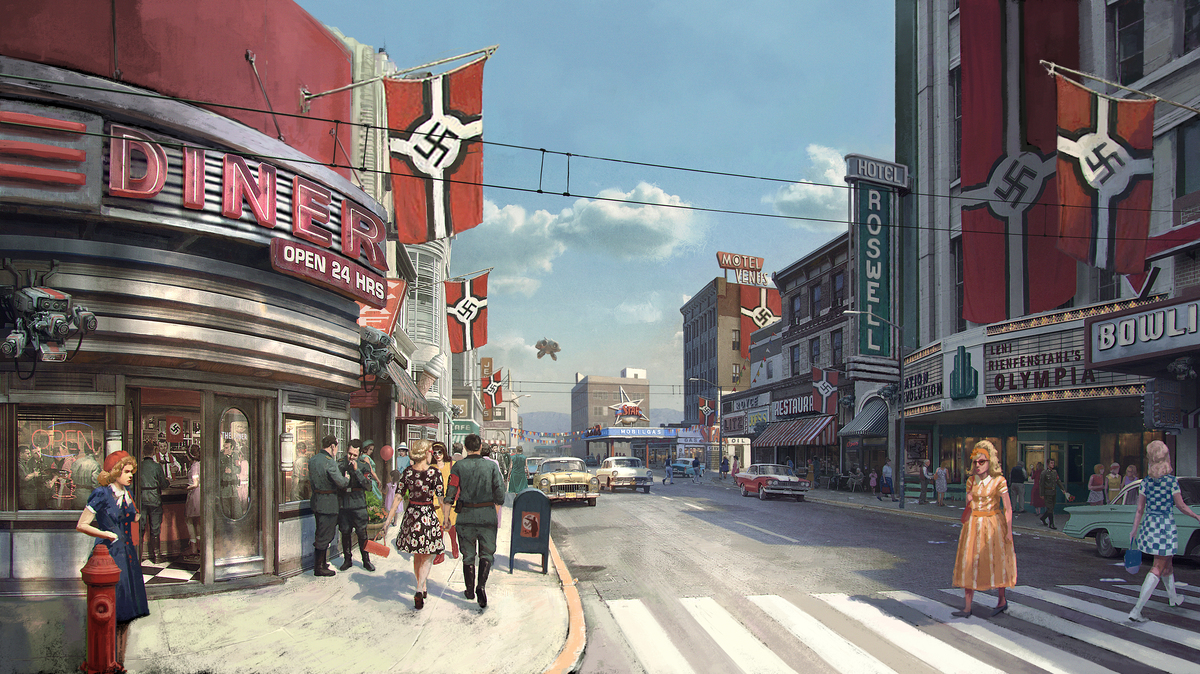 The New Colossus digs into B.J.'s childhood in a small Texas town after the war.

In New Colossus, B.J. Blazkowicz is given parents, a childhood, a past — this sensitive, sweet boy raised in Mesquite, Texas by his loving, young Jewish mother and abusive white supremacist father. I could write ten thousand words on the unlikely moment where Billy's father confronts him about his nightmares of monsters in the basement and goes with him into the dark to show him that there's nothing to be afraid of; a formative moment of kindness from his abuser and the first time Billy holds a gun on his own. The first time he feels the power of it in his hands and how he doesn't ever want to put it down.

Until he does. Until he is too tired to carry it anymore.

This is not an Edith Finch-level exploration of the mechanisms of doom and guilt. It wasn't built for that. But with this game's altered focus, B.J. Blazkowicz is no longer flat. No longer just a collection of pixels in the shape of a killing machine worn down by years of service, but a person. Human. Damaged. Weighing the Polish-Jewish boy from Mesquite, Texas against the man slowly dying aboard a giant Nazi airship, wondering if he has fought enough and killed enough to make himself, finally, into a good man.

New Colossus ... is a thesis on surprise, on twist, on melding the bonkers with the sublime. It is a powerful political statement on American fascism, a revolutionary fantasy, a murder simulator and a ridiculous, over-the-top romp all at the same time. It is an exploration of loss and regret wrapped in the costume of a bloody shooter

But by far, the most interesting thing New Colossus does with its storytelling is lie. At the narrative's pivot-point (a held breath between dying B.J., fighting Nazis to his final breath, and the game's very different second half), B.J. is captured, imprisoned and tried as "Terror Billy" — a terrorist and murderer who has ended the lives of thousands of loyal Germans doing nothing more than bravely maintaining the peace against violent, radical elements. As the judge passes sentence (death, of course), B.J. breaks free from his bonds and starts killing everything he sees. Starting unarmed, without armor and at low health, he has to gear up and fight wave after wave of enemies. In terms of gameplay, it is catharsis. There's no art to it. It is a pure moment of run-and-gun violence, culminating in him crashing through a door and finding ...

His mother, sitting in a chair, waiting for him.

B.J. collapses into her arms, his head pillowed in her lap. He says, "Mama, I don't wanna go back out there. I can't do this anymore."

"We'll be together," she says. "Soon. You just have one more hardship to get through."

And that hardship is, of course, his execution — in Washington D.C., on the steps of the Lincoln Memorial, before a screaming, bloodthirsty public waiting to watch the Nazis cut off Terror Billy's head and finally put an end to his crimes. Could this be the end of B.J. Blazkowicz? Maybe. Bethesda Softworks hide caption 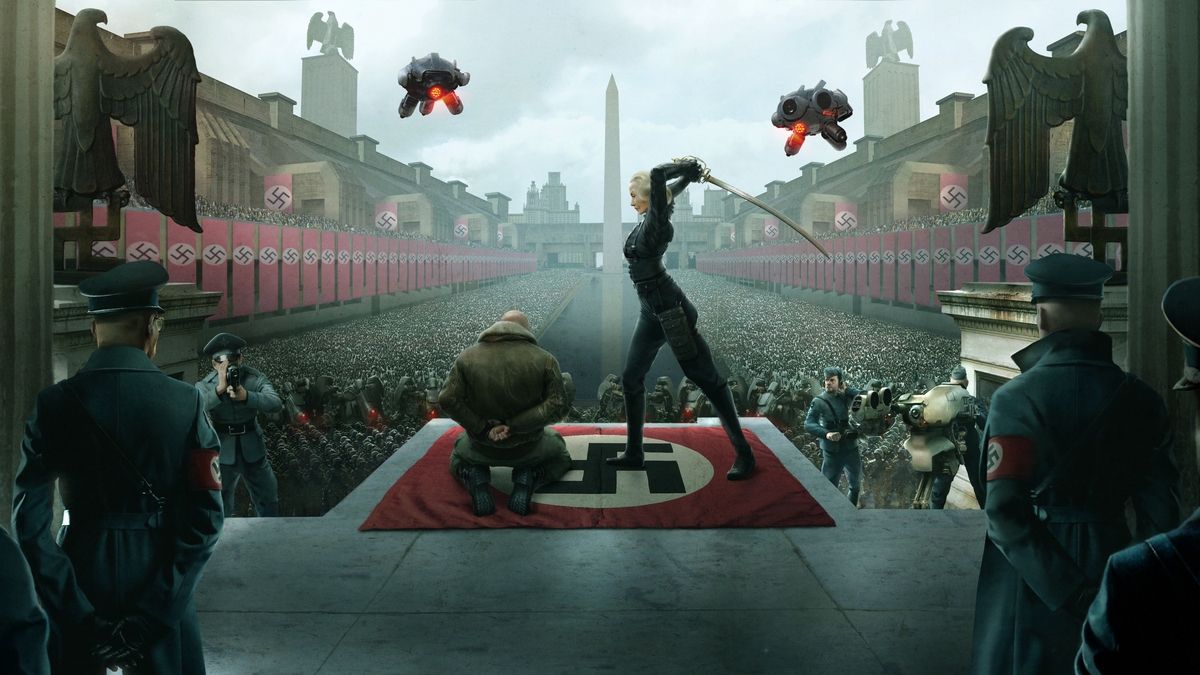 Could this be the end of B.J. Blazkowicz? Maybe.

The escape was a dream. A hallucination. And everything that comes after — an even less likely escape involving attaching B.J.'s severed head to a Nazi supersoldier body, a rallying of American resistance groups, a trip to Venus disguised as an actor auditioning for the role of B.J. Blazkowicz in a movie about his capture written by Adolph Hitler and the eventual overthrow of the Nazis and their Klan lackeys in America, orchestrated by joyous, whiskey-swilling communists, jazz musicians, thinly disguised Black Panthers and the Jewish resistance — is, in my mind, the same.

Everything that comes after is the comforting lie told by New Colossus. As far as I'm concerned, B.J. dies on the steps of the Lincoln Memorial. That is the end of his story. He has confronted his demons, grown, sacrificed, found peace in the midst of war. And everything after it is a fantasy within a fantasy. A dream of a violent, bullet-ridden Valhalla.

Depending on how you stumble across side content, the writers even glancingly confirm it. There is a moment shortly after his execution and re-birth where B.J. sees Anya and asks her, "Is this real? Or am I in heaven?" She is distracted, doesn't answer. Later, he lies down beside her in their bed and listens to her repeat some lines of dialogue from earlier. He asks her again if this is real, but Anya has drifted off. She doesn't answer. And B.J. is left staring up at nothing, wondering, the apotheosis of violence yet to come.

Because even in death — even in his version of heaven — there are still Nazis to kill. People that need to be freed. Friends to fight beside, a revolution to be fought and a war that needs to be won.

And B.J. will never put down his guns again.