Accessibility links
What To Watch This Week: COVID Legislation, Vaccine Hearing As Congress returns from its recess, the sticking points in another pandemic relief package include unemployment benefits. Plus, here are five more things to watch this week. 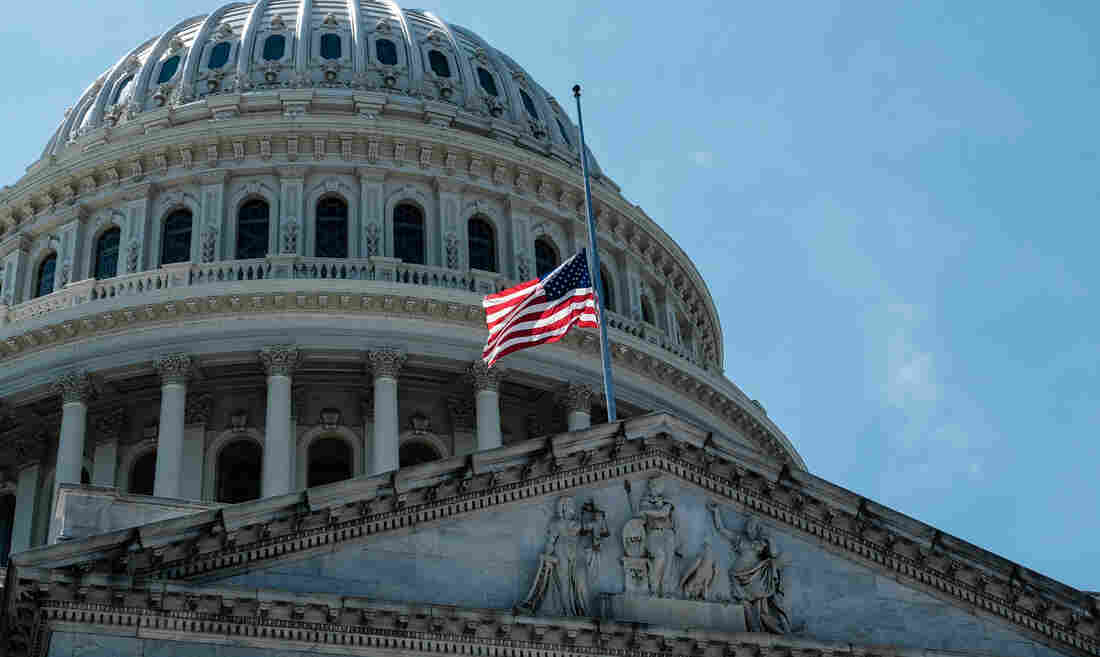 Lawmakers return to the Capitol on Monday. On Saturday, the flag was lowered to half staff to honor the life of Rep. John Lewis, D-Ga., who died late Friday. Michael A. McCoy/Getty Images hide caption 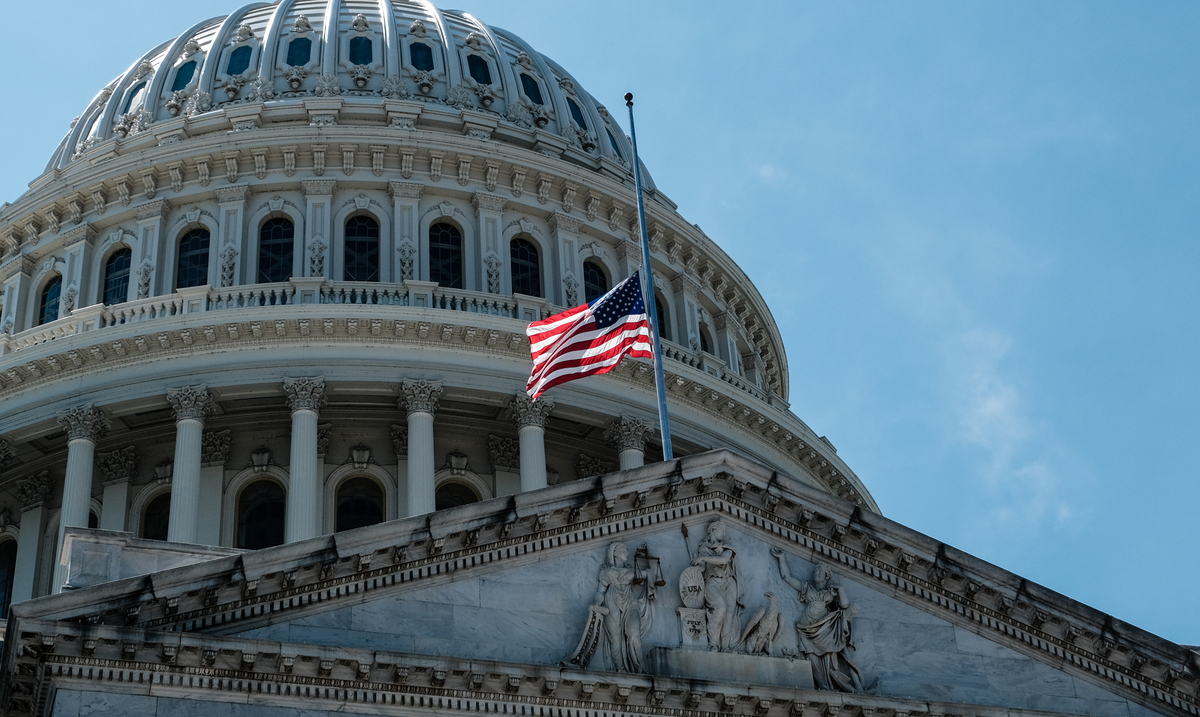 Lawmakers return to the Capitol on Monday. On Saturday, the flag was lowered to half staff to honor the life of Rep. John Lewis, D-Ga., who died late Friday.

Congress returns from a summer recess Monday as many states experience spikes in confirmed coronavirus cases.

State governments face a precipitous drop in revenue, parents and teachers are debating how kids will return to school in the fall, and millions of unemployed workers face the prospect of their pandemic assistance running out at the end of the month.

But there have been zero negotiations between House Speaker Nancy Pelosi, D-Calif., and Senate Majority Leader Mitch McConnell, R-Ky., and they remain very far apart on the contours of what should be in another relief bill.

Pelosi pushed again last week for the $3 trillion HEROES Act the House passed more than two months ago. But that bill, which was approved largely along party lines, was ignored by McConnell — and also met with a veto threat by the president.

McConnell insists he's writing the next bill on his own and has indicated he's looking at something significantly smaller — about $1 trillion. Senate Democrats haven't heard any details and, according to a source on a call with the Democratic caucus last week, Senate Minority Leader Chuck Schumer, D-N.Y., said he would engage in talks only if House Democrats were included.

McConnell is expected to unveil his proposal early this week, according to an aide familiar with the leader's plans. After discussions with Senate Republicans at a lunch on Tuesday, the bill could be rolled out if the GOP conference backs the blueprint.

He has repeatedly said no bill would pass without liability protection related to everyone from health care workers to businesses to schools.

"Nobody should have to face an epidemic of lawsuits on the heels of the pandemic we already have related to the coronavirus," McConnell said last week when visiting a health care facility in his home state.

President Trump agrees there needs to be more aid and has repeatedly insisted that schools need to be back in person in the fall. He wasn't an active negotiator in talks on the previous packages, but last week, a White House spokesperson said the president is pushing again for a payroll tax cut. That is something he's previously said he wanted, but it hasn't gained significant support from members of his own party or from Democrats, according to aides from both parties. In a Fox News Sunday interview, Trump said he would consider vetoing a bill that did not have a payroll tax cut in it.

Pelosi dismisses GOP efforts to scale down a package from the ambitious plan the House passed.

"If we don't put money in the pockets of the American people with their direct payments and unemployment insurance, it will be much worse," Pelosi told reporters on Capitol Hill last week.

Leaders from both parties maintain that they want to approve a deal and send it to the president to sign before they head out for an August recess, which marks the final campaign push before the November elections. Pelosi has said she will "absolutely" delay the start of recess to get something in place, but there are several major policy areas where both sides would need to move.

Here are the key sticking points: 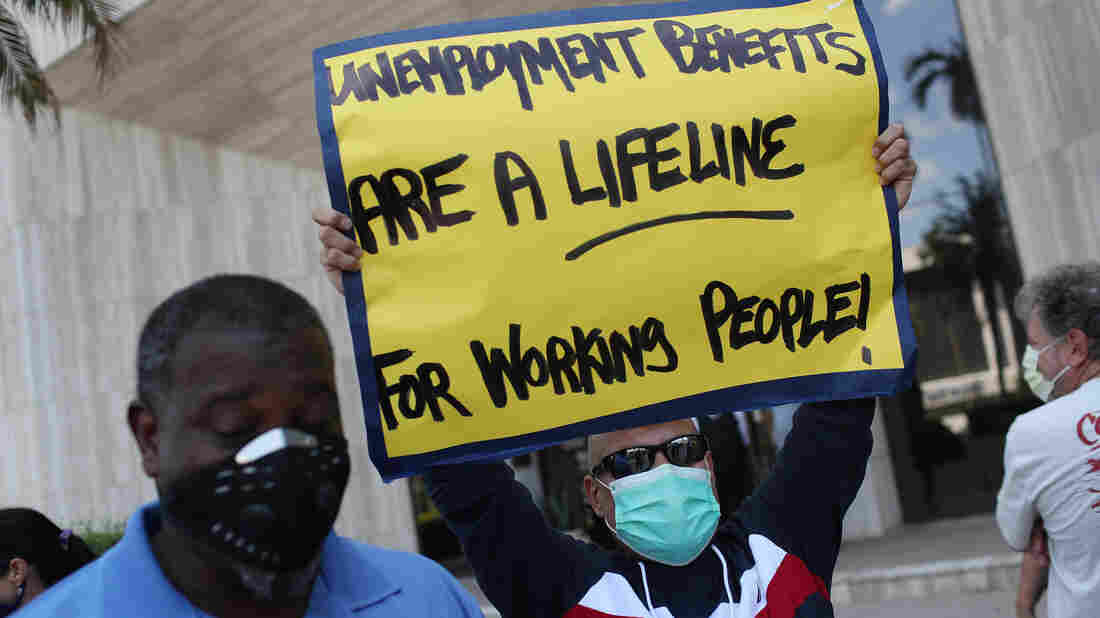 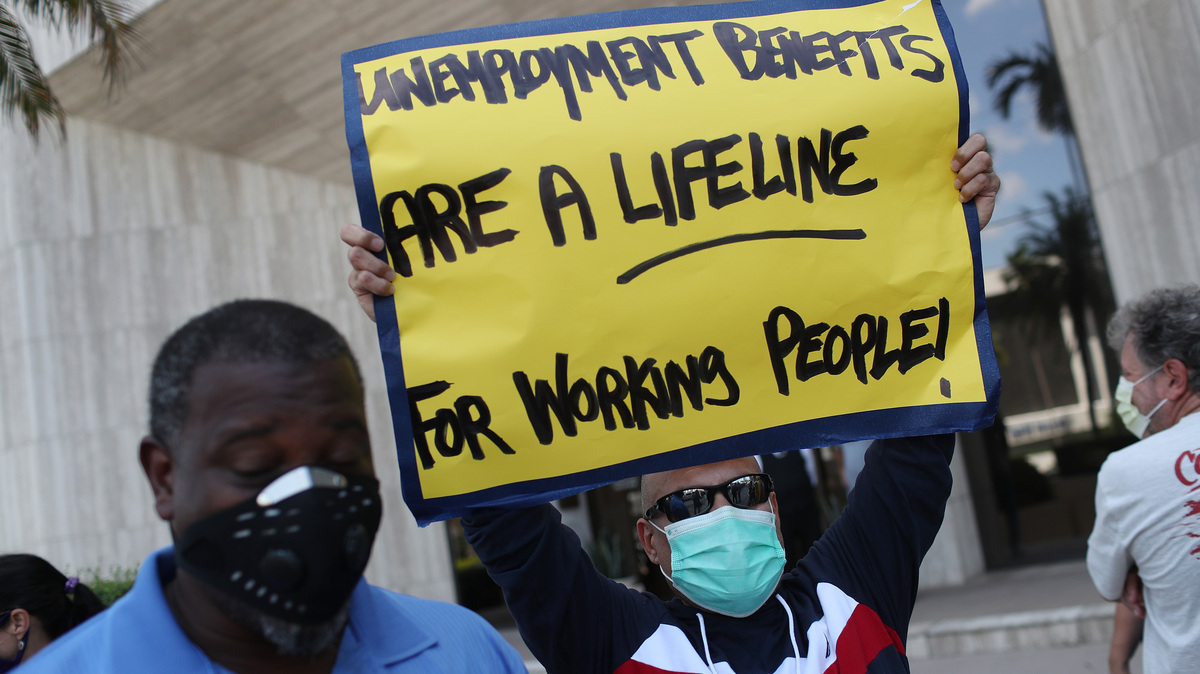 Congress extended unemployment insurance benefits and added a $600-per-week benefit to help those affected by the pandemic, but that boost in assistance expires on July 31. Both sides agree that states will need more money to keep paying assistance, but the additional weekly payment is where Democrats and Republicans part ways.

McConnell argues that renewing that full payment is a disincentive for the jobless to return to work because for many people, the combined benefits are more in weekly wages than they would receive if they go back to their jobs.

Congress approved $300 billion in the CARES Act in March in direct payments for Americans — $1,200 or less for individuals, depending on their income level. Families received more — up to an income cap — and also were eligible for $500 per child.

Pelosi signaled that Democrats could accept some amount lower than the $600 benefit if there were other provisions giving government aid, such as another round of checks.

"The whole package will depend on what we do also for direct payments, which are so essential," Pelosi said.

Pelosi has bristled at McConnell's insistence that there is a red line that any new bill include legal protections for a broad array of businesses, hospitals, workers and K-12 schools and universities.

Instead, she argues that worker protections that Democrats added for Occupational Safety and Health Administration regulations are the preferred way to address that. "That is their protection," she said. "It's their best defense."

McConnell has been working with Texas GOP Sen. John Cornyn, a former prosecutor, on the liability provisions and a draft was shared with the White House last week. According to the draft, obtained by NPR, the measure would include a temporary shield from lawsuits related to the pandemic from December 2019 through 2024.

3. Aid for state and local governments

The House-passed bill provided roughly $1 trillion to state and local governments. In recent weeks, many states have warned they are facing decisions about cuts to key services as tax revenues have plummeted with many businesses closed or operating at reduced levels.

McConnell has acknowledged that some state aid is needed, but the parties are far apart on the details, and many Republican lawmakers say any new money has to be funneled for items directly related to the virus, not to paying down deficits in the states.

Pelosi and other Democrats warn that without more help, states will have to lay off first responders or cut education budgets, which are tight with new demands related to the coronavirus.

4. Help for schools to reopen

McConnell shifted his emphasis in the past couple of weeks to note that the next package will not only need to address liability issues, but will have to include help for schools.

The HEROES Act includes $100 billion to fortify school districts' budgets as they work to buy personal protective equipment and other equipment and technology for remote learning, as needed. Separately, Democrats included more money for schools in an infrastructure bill they approved recently.

Presumptive Democratic presidential nominee Joe Biden rolled out his own proposal for what schools need, including an additional $30 billion.

But as coronavirus cases spike in some regions and schools reevaluate plans to bring students back in person, some Republicans argue that additional money should be conditioned on schools returning to full-time, in-person schedules.

The Paycheck Protection Program, which provided loans to small businesses, was one the most popular federal components of the $2 trillion CARES Act enacted in March.

The money went quickly, and Congress approved more for the program, but issues about transparency and some larger businesses getting the money raised concerns about how to structure any additional assistance.

5 other things to watch this week: 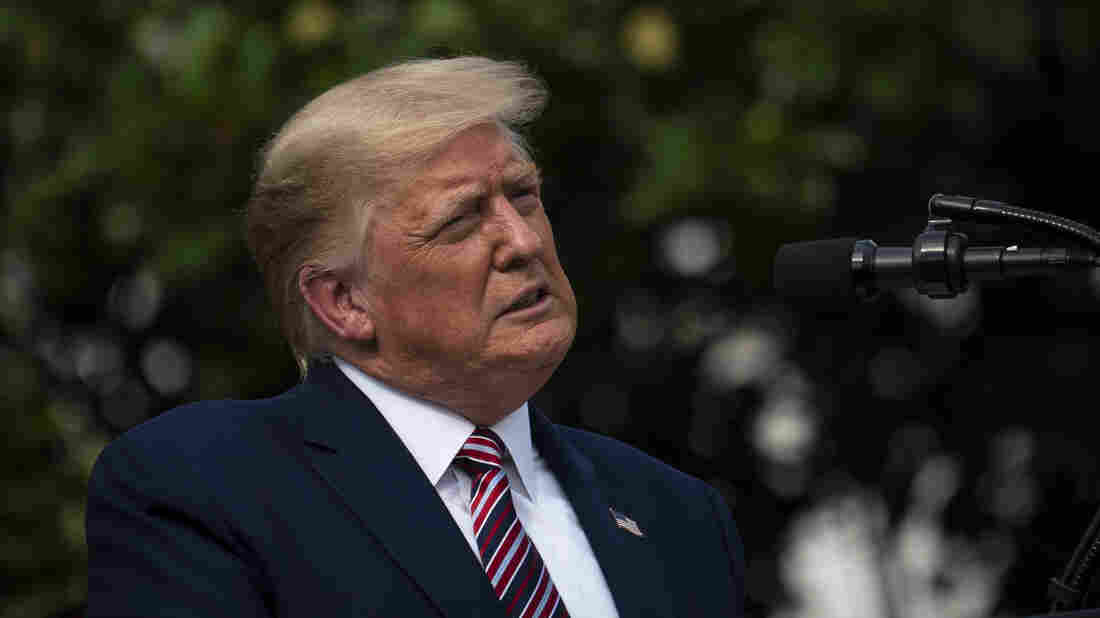 President Trump speaks during an event about regulatory reform at the White House on Thursday. Drew Angerer/Getty Images hide caption 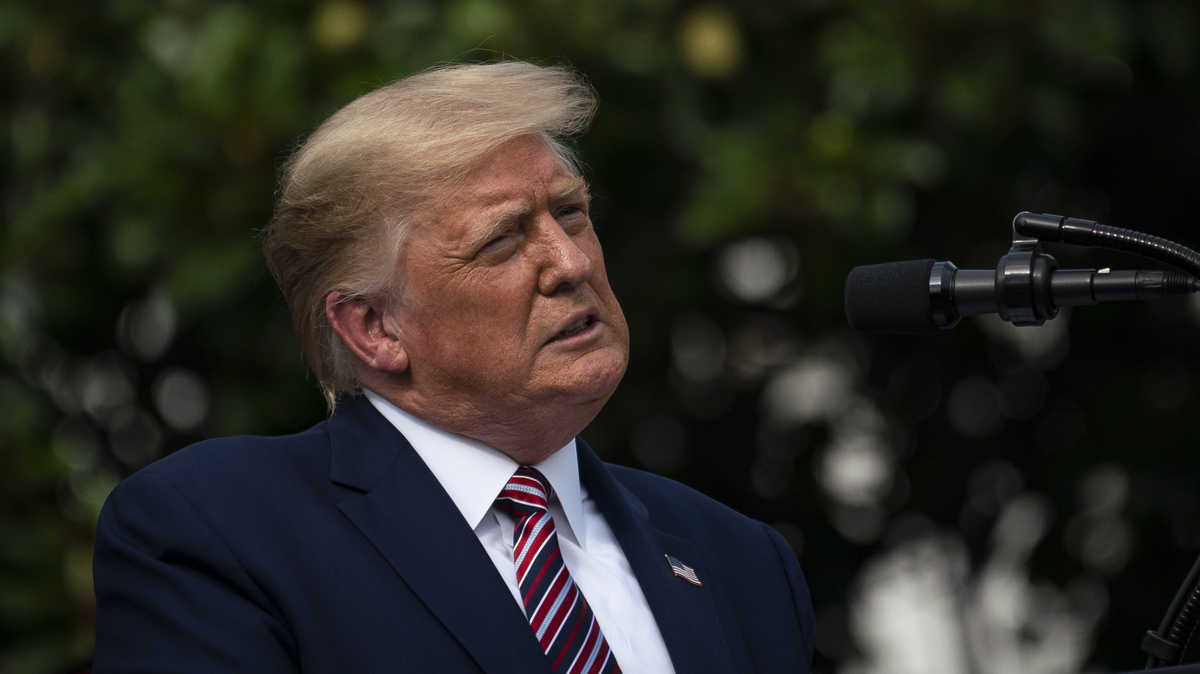 President Trump speaks during an event about regulatory reform at the White House on Thursday.

1. Trump's plan for the suburbs: Last week, Trump said that on Tuesday, he'd be "discussing our one plan on suburbia, but that's one of many, many different plans." Trump has been pitching "law and order" and "local" control over zoning laws and issuing dire warnings about what Democrats would do to "our beautiful and successful suburbs" as a way to try and scare and appeal to whites in the suburbs.

Why the focus on the suburbs? Consider that in 2016 Trump won the suburbs narrowly. But in polling against Biden, Trump is getting trounced by 25 points among voters there, according to the latest NPR/PBS NewsHour/Marist poll.

Dr. Anthony Fauci said Friday on PBS NewsHour that he's still "cautiously optimistic" that a vaccine will come online by the end of the year, with distribution in 2021.

3. Preparations for the 2020 election: On Wednesday, the Senate Rules and Administration Committee holds a hearing about preparations states are taking for the 2020 elections. Witnesses include two Republican secretaries of state, Tre Hargett of Tennessee and West Virginia's Mac Warner. Hargett has resisted making mail-in voting available to all voters. In March, Warner said every voter would be receiving an absentee ballot application in the mail, something Trump has criticized other election administration officials in other states for doing. West Virginia went for Trump by the widest margin of any state in 2016.

4. Back to school? The House holds a hearing Thursday on reopening schools. The White House blocked Centers for Disease Control and Prevention Director Dr. Robert Redfield from testifying, according to Democrats on the House education committee.

"It is alarming that the Trump administration is preventing the CDC from appearing before the committee at a time when its expertise and guidance is so critical to the health and safety of students, parents, and educators," Chairman Bobby Scott of Virginia said in a statement.

The White House says Redfield has testified multiple times before Congress in the past few months.

5. Federal moratorium on evictions expires Friday: According to one survey, 30% of Americans missed housing payments at the beginning of June.

Sen. Kamala Harris, D-Calif, on the short list to be Biden's running mate, introduced a bill last week that would extend the ban a year and in that time, not allow landlords to raise rents or report missed payment to credit reporting agencies. A yearlong ban on rental evictions is in Democrats' coronavirus relief bill.

"You know, I gave a little blood for the right to vote, almost died on that bridge in Selma. I'm not going to stand by and see the people take the vote from us. We have to use it. If we fail to use it, we will lose it."

— John Lewis, the congressman and civil rights icon who died Friday, as quoted by NPR's Don Gonyea at a church in Cincinnati, Ohio, in 2018