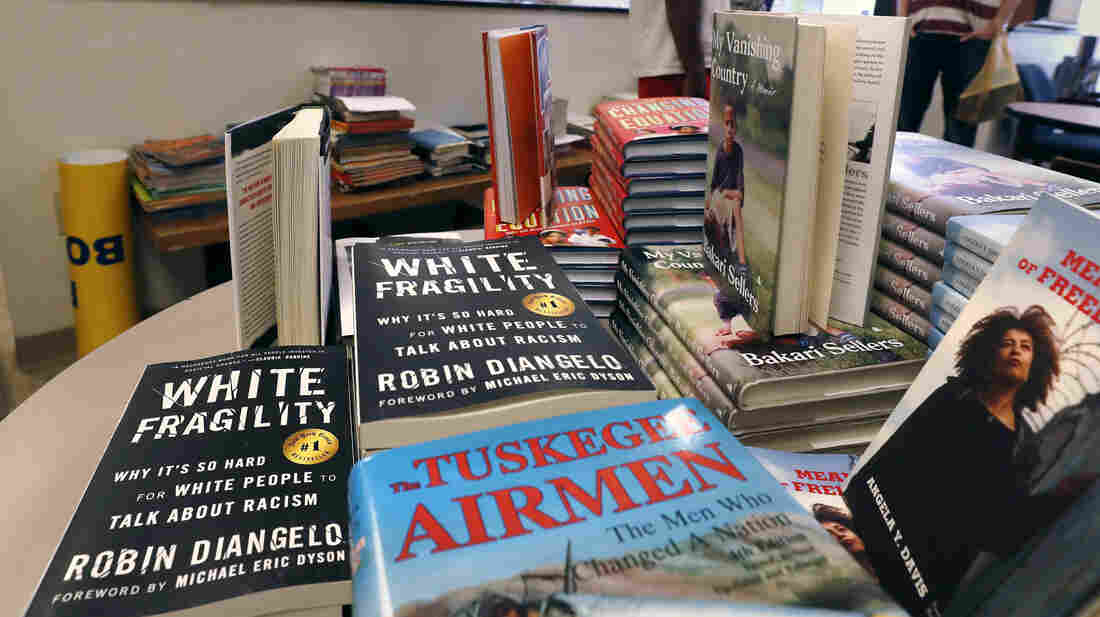 White Fragility is on display in June at the Frugal Bookstore in Boston. Columbia University John McWhorter says author Robin DiAngelo is well-intentioned but that the book ultimately is racist. Charles Krupa/AP hide caption 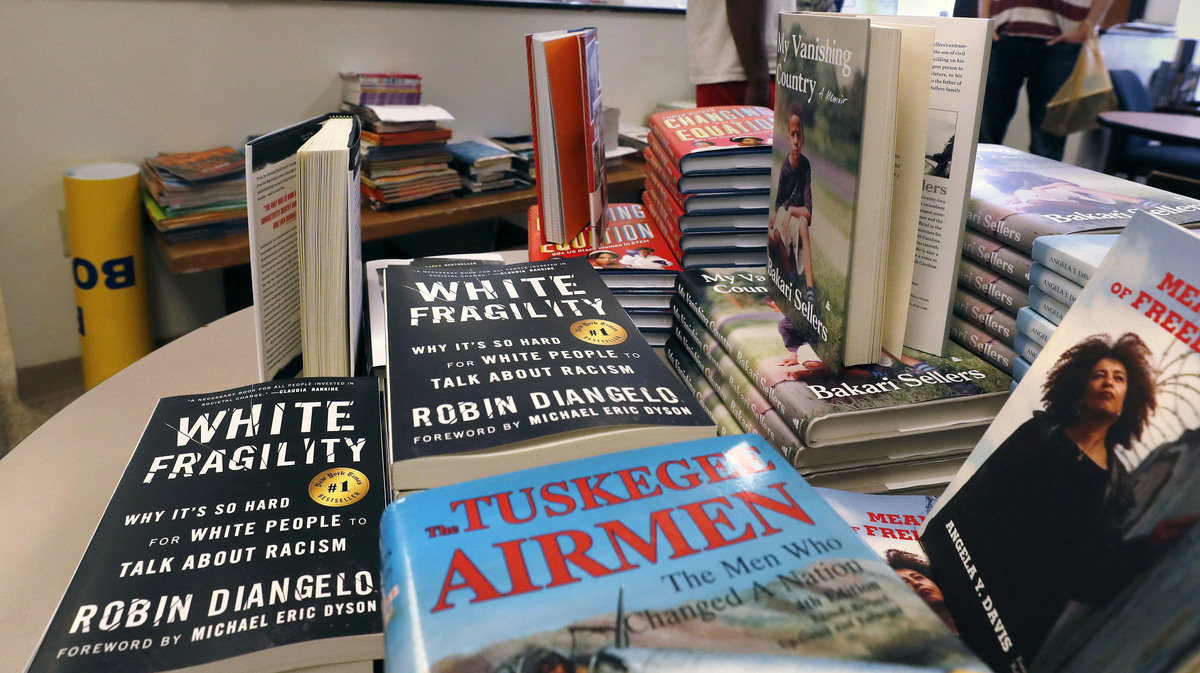 White Fragility is on display in June at the Frugal Bookstore in Boston. Columbia University John McWhorter says author Robin DiAngelo is well-intentioned but that the book ultimately is racist.

Robin DiAngelo's book White Fragility, published in 2018, has shot up bestseller lists after protests over the death of George Floyd reignited discussions about racism in America.

DiAngelo is white and regards racism as "the foundation of the society we are in." She says white people become defensive and exhibit "fragility" when challenged on their underlying and, often unconscious, racism.

White people will never be rid of their biases, DiAngelo has told NPR, saying their necessary work "will be lifelong: really thinking deeply about what it means to be white, how your race shapes your life."

But as DiAngelo's corporate lecture requests and book sales have grown, so too has criticism of her work.

'There Is No Neutral': 'Nice White People' Can Still Be Complicit In A Racist Society

The Washington Post's Carlos Lozada said the book employs "circular logic." Lozada writes that White Fragility views people of color as "almost entirely powerless, and the few with influence do not wield it in the service of racial justice."

Columbia University professor and linguist John McWhorter, who is Black, echoes that criticism, writing in The Atlantic that the book "openly infantilized Black people" and "simply dehumanized us."

He argues that for "DiAngelo, the whole point is the suffering" of white people, who are "taught that pretty much anything they say or think is racist and thus antithetical to the good."

McWhorter spoke with Morning Edition's Steve Inskeep about his criticism of the book and what he thinks is needed to change racist institutions.

Here are excerpts of the interview:

What are some examples of the way that she talks in the book and also talks in her seminars that you think miss the mark?

Well, I understand where she's coming from. I don't think she's a hustler. I know that she's sincere. But my question is, is it necessary for every good white person to walk around feeling uncomfortable about themselves as abstractly complicit in a racist system before we see political change?

And she's got about 25 proscriptions that make it so that any good white person is essentially muzzled. You just have to be quiet.

If you think about human history, there have been great and wrenching changes not only in this country, but in a great many others, but especially in this one — say, a few things that happened about 50 years ago — without there needing to be this rather Orwellian indoctrination program. So the question is, why do we need this now?

You have said exactly what I believe. I think that what Robin DiAngelo is doing is well-intentioned, but I think ultimately, it's idle. Ultimately, the result of what she would create is a certain educated class of white person feeling better about themselves. And frankly, that's antithetical to her goal, because no matter how she wants it to go, people are going to think that they've done some kind of work. It's going to be hard to get people to truly feel as endlessly culpable as she's seeking.

And in the meantime, what's the connection between that and forging change? You can say that all of this is a prelude to changing structures. But the question will always be, why don't you just go out and change the structures? And why do you think that you couldn't until doing this?

You say this book that is dedicated to eliminating racism in white people is racist. Why do you say it's racist?

I also want people to know that you're a linguist. And here we are using this word racist. What is a proper definition of racist?

Well, racism is a very confusing word these days. But when I say that White Fragility is a racist book, what I mean is it does not allow Black people to be full human beings, because full human beings deal with the imperfections of life.

This is important: By the imperfections of life, I do not mean somebody stepping on your neck until you're dead. I'm not talking about actual abuse. I'm talking about the more abstract sorts of things that we're familiar with, especially over the past several decades as part of our racial landscape, where I think that the solutions are going to be more subtle than the kind of mental and spiritual straitjacketing that DiAngelo seems to think are necessary. It's an interesting proposal, but it's by no means as self-evidently wise as she implies, and that many people tragically seem to be agreeing with her about.

NPR's Victoria Whitley-Berry and Steve Mullis produced and edited the audio version of this interview.