Accessibility links
How To Make Family Screen Time Work For You : Life Kit Some parents think the best way to manage a child's screen time is to set hard limits. But those rules are particularly difficult to keep during a pandemic, when screens are a lifeline for all of us. So what should the rules be? Sonia Livingstone and Alicia Blum-Ross, coauthors of Parenting For A Digital Future, explain why being too strict about screen time might not be the best strategy for your kids — or the whole family. 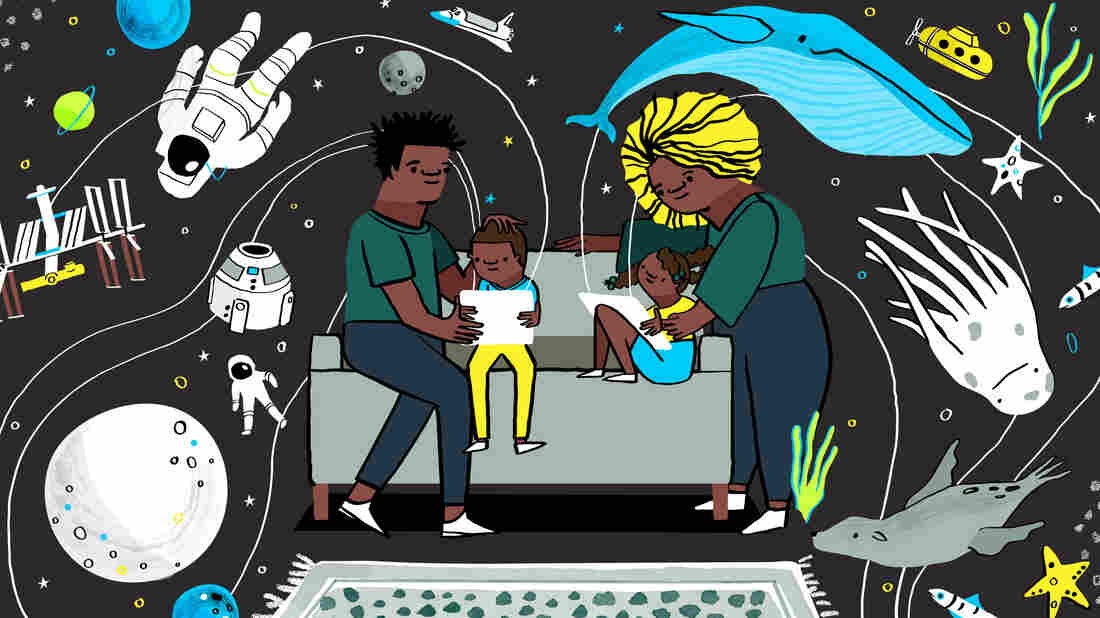 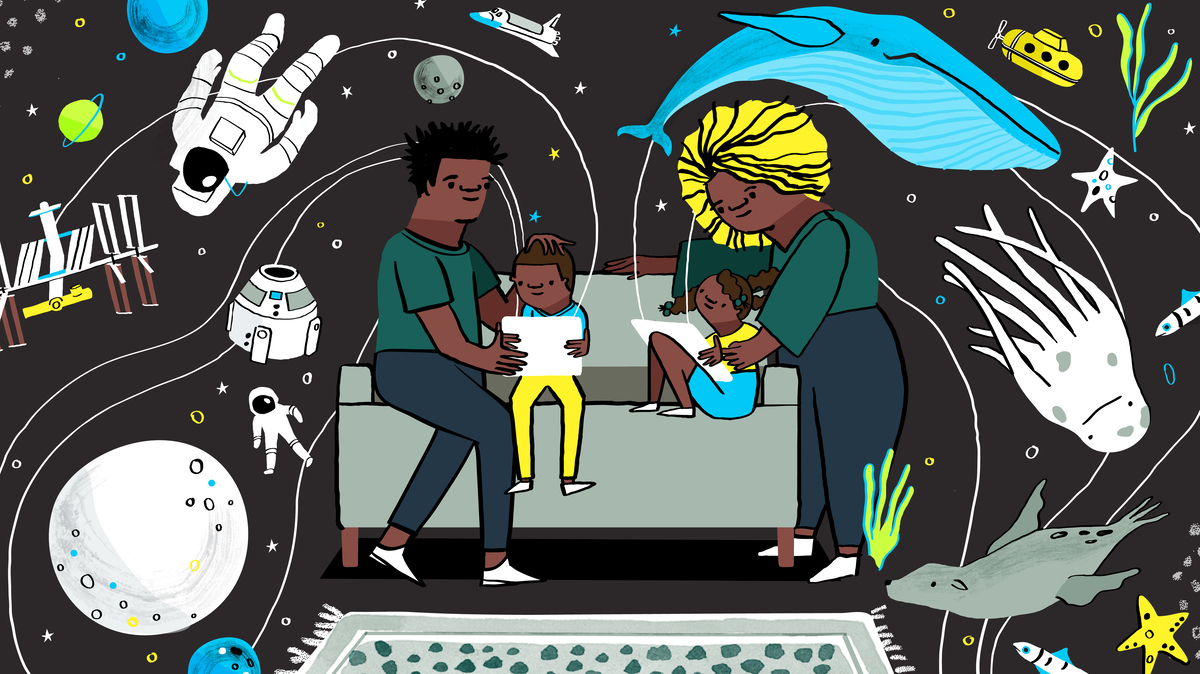 There's an experiment Sonia Livingstone had always dreamed of doing.

She's a social psychologist at the London School of Economics who researches children and media. And her dream experiment was this: "Let's turn off the outside world and see how it is if you've only got the technology."

During the pandemic, it kind of happened. Lockdowns started all over the world and families were stuck inside with their digital devices standing in for work, school, family, friends. And, Livingstone says, we learned something reassuring that we should have known all along:

"Of course, families want to be together." And children, and even teens, miss seeing their friends in person, riding their bikes, going to school.

Now that we're all living through this experiment, this was a great time to sit down with Livingstone and her coauthor Alicia Blum Ross — two researchers who I relied on in reporting my book The Art of Screen Time — and talk to them about their new book, Parenting for a Digital Future. It's based on several years of research with a diverse group of families in the UK.

Here are their takeaways about finding confidence and calm in this world of digital parenting.

This conversation was edited for length and clarity.

In the book, you sort parents into three buckets: those that resist technology, those that try to find a balance and those that embrace technology. Can you talk more about that?

Sonia Livingstone: We thought about them as three modes of practice, or three ways in which parents engage with the world.

There are those that resist technology. For some parents, this is a response to some kind of trouble. Yet we were surprised to find that resistance is often value-driven — reflecting a desire to prioritize non-digital activities and visions of the future, sometimes as a way of resisting social pressures and commercialization more generally.

We heard from lots of parents that they're looking for balance. That's kind of the dominant advice that parents are given — to balance indoor and outdoor, online and offline, different kinds of activities. And we could see lots of them doing that.

We were especially intrigued by the parents who did what we called 'embrace technology.' They were the parents who resolved the question 'Should you let your kids have lots of screen time? Or should you try to restrict it? Is it the future or is it a problem?'

By embracing technology, they seemed to be saying, 'Look, it's the future, we need to get on with it. We need to find our way.' They were often the most enthusiastic about their approach. And the parents and children could figure out what was exciting about technology together. They often had the most shared practices.

What does it mean to really be a 'happy tech parent' as you call it in your book? What are some examples of the 'happy geek parent'?

Alicia Blum Ross: One thing I personally learned from the parents who embraced technology was how to live out family values through technology. For example, if a family was artistic, yes, they would do paper mâché and coloring, but they also found Monument Valley — this beautiful app — and would play it with their kids. And they would watch movies that felt consistent with how the parents wanted to live and what they wanted to talk to their kids about. And obviously the kids had their own preferences too, but the parents were very active in shaping that.

And certainly, as the parent of 7-year-old twins living through a pandemic and working a full time job, I would say I find a lot to be inspired by in these parents, because actually I need to rely on technology. From talking with a lot of parents who seemed more confident and calm in their embrace of technology, I learned that I can play an active role in figuring out what it is that I want my kids to spend time with.

I love that you're using the word 'calm' because I feel like parents really need to hear that right now. And we're all using technology in the way that you're describing, especially now, to get time for ourselves. But it comes with this burden of guilt and anxiety. And what you're describing is just a much more thoughtful and positive process — thinking about what kind of screen time would feel good.

Blum Ross: One thing that we learned from the research is that parents have a variety of tools in their toolkit. A lot of the advice for parents has focused on the restrictive forms of mediation — set these rules, keep the timer and watch the clock.

But are there other tools in my toolkit that I can use right now? One of those tools is doing some curation — doing some upfront research on what it is you want your kids to be spending time doing.

Can Screens Help Your Child's Brain? 4 Tips To Get The Most From Kids' Media

Another is talking with them about what they're doing and watching. For example, my 7-year-old son really loves the show Ninjago. It isn't the most beautifully curated show, but I can talk to him about it at the end — I can draw him out and then we can jump off the couch cushions like the Ninjago characters. I can start that off, and then his twin sister can reluctantly engage, and I can walk away and go cook dinner or do my work. It's about using that media as a jumping off point for other ways of spending time together.

Livingstone: It wasn't just that we felt parents were on their own and looking for advice, but also that they were on the receiving end of a barrage of advice.

The research shows that parents are trying to live in a more democratic family in which parents and children have more trust between each other and can turn to each other when something goes wrong rather than feel they're going to be punished or criticized.

We saw in the research that parents often use the media as part of that negotiation — to find something they could enjoy together or find something that would be a pretext for them to have a difficult conversation.

So the idea of being a technology purist, which is kind of what the media tells us to do, is conflicting with what many families have as a pretty legitimate value, which is having a household where everyone gets a little bit of a say?

Livingstone: Absolutely. Parents are not digital immigrants. They know something about technology. They use it. They have their own kind of expertise. Parents can be confident in drawing on what they have learned and following their values in making judgments and explaining those to children. Because very often, if children get the explanation they'll want to argue a bit, but they'll see the point. But if they're just told without a reason, they'll push back.

How does the values-based approach work with parents who are facing something like "should I give my kid a phone," for example? How do you see parents handling that skillfully?

Livingstone: So the key question given to parents is 'What's the right age for my child to have a phone?' And what we would say from the research, is parents take very diverse approaches. There's no one right answer. The idea of the democratic family recognizes the values parents are trying to encourage and also the values children might contribute in relation to the phone.

So if an important value for everyone is staying safe. Then the question is, is the phone the key way of staying safe or would there be other ways of managing and ensuring a child's safety? If it's about communicating with family who aren't in the same house? Obviously, they need access to a phone, but maybe they don't need their own phone. If it's about playing games and entertaining themselves when they're on their own, maybe for young children the solution is a phone without a sim card. It's not like there is a single right age, but more-so, what are the parents trying to make work?

Blum Ross: I think what the pandemic has taught us, actually, is that it's not that we don't value those in-person connections. It's actually that everyone's desperate to get back to them and that we are using digital media as a way to supplement and augment the ways that we can be together.

At Your Wits' End With A Screen-Obsessed Kid? Read This

Digital media really doesn't replace those other ways of being together, it just provides a kind of lifeline and a throughline and continuity for families who even pre-pandemic may have lived far from loved ones. We're all missing seeing people outside of our immediate family. But it really highlights to me how much in-person connection will reemerge when this is all over at some point.

We'd love to hear from you. Leave us a voicemail with a greeting, your name, phone number and a random life tip at 202.216.9823. It might appear in an upcoming episode. Or send us an email at LifeKit@npr.org.

The podcast portion of this story was produced by Clare Schneider.

What Families Need To Know About Screen Time This Summer