Accessibility links
Why Rights Groups Worry About The Philippines' New Anti-Terrorism Law Petitions have piled up at the country's Supreme Court to overturn the new legislation championed by President Rodrigo Duterte, which could jail suspects without charge for weeks. 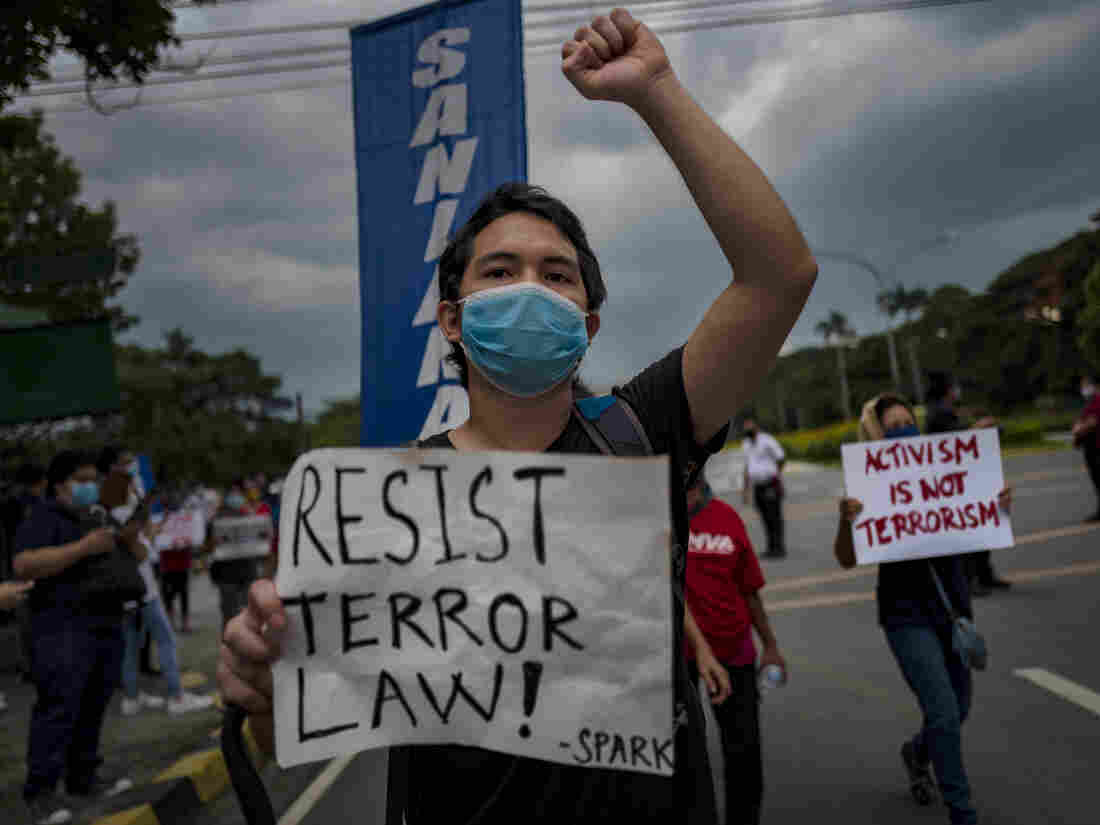 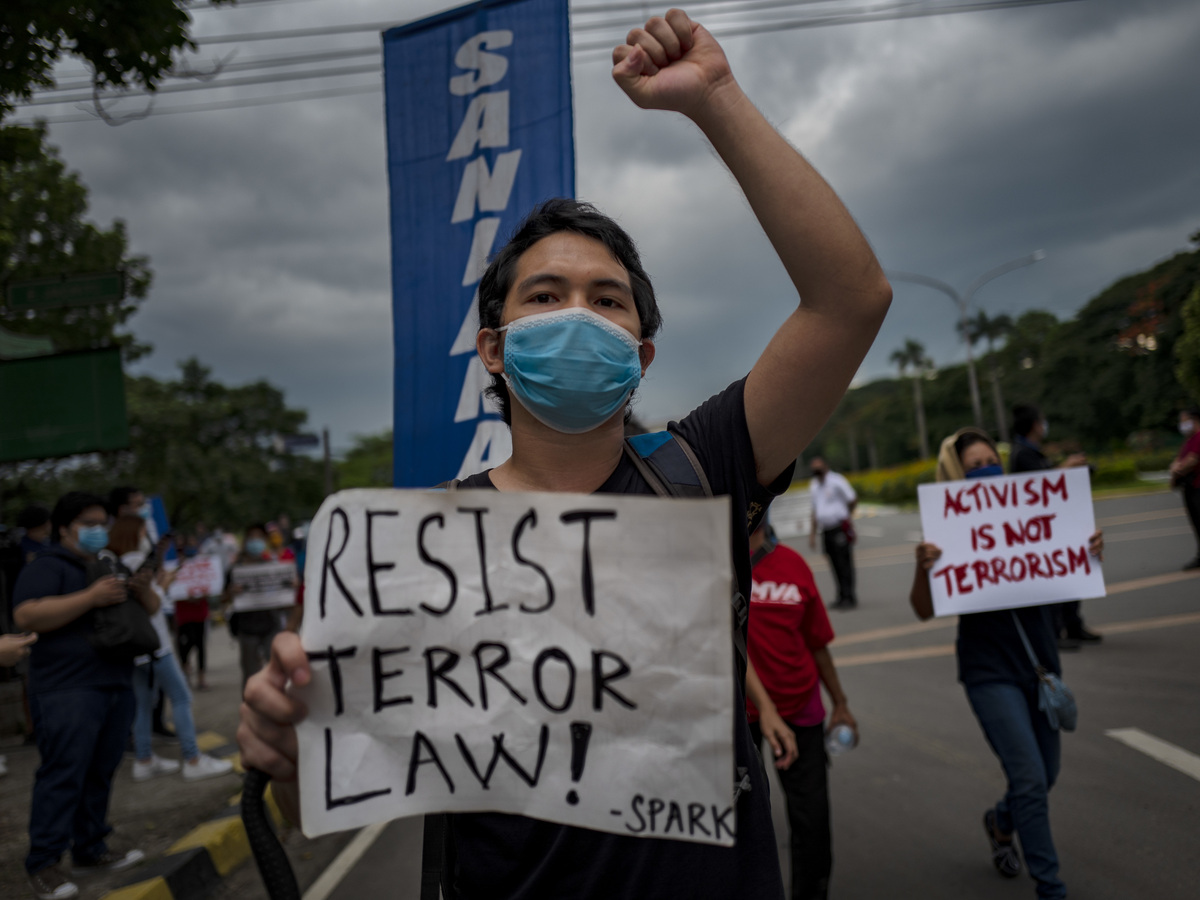 Petitions have piled up at the Philippines' Supreme Court to overturn a new anti-terrorism law championed by President Rodrigo Duterte, which could jail suspects without charge for weeks.

The government says it needs the legislation to combat insurgencies and that it safeguards freedoms. The Philippine Foreign Affairs Department even sent a letter to U.S. Congress members to allay concerns over the law, saying, "The Philippines remains committed to the protection of civil and political liberties as well as human rights."

But human rights groups warn that the hard-line Duterte administration could use the legislation to prosecute political opponents. The Philippine Catholic Church went so far as to compare the legislation to China's new national security law imposed on Hong Kong.

The law took effect Saturday at a time when the authorities are battling the coronavirus and arresting those caught breaching the lockdown. It follows widespread condemnation of the Duterte administration for harsh tactics against drug suspects and against government critics, as well as for undercutting civil liberties such as a free press, according to human rights advocates.

Here are some key takeaways from the debate around the Philippines' Anti-Terrorism Act of 2020.

The law greatly expands the definition of terrorism

It includes such broad offenses as "engaging in acts intended to endanger a person's life," intended to "damage public property" or "interfere with critical infrastructure," where the purpose is to intimidate the government.

The National Union of People's Lawyers has petitioned the Supreme Court to overturn the law on the grounds it is overly broad and essentially criminalizes intent.

One new offense, inciting to commit terrorism, is particularly problematic, the rights advocates say. The text says inciting others through "speeches, writings, proclamations, emblems, banners, and other representations tending to the same end" could carry a punishment of 12 years in prison.

The law does state, however, that it is not intended to punish advocacy, protest, dissent, industrial action and strikes, so long as they don't create "a serious risk to public safety."

"But who defines what is and what isn't a serious risk?" asks Aaron Sobel with the Carnegie Endowment for International Peace.

Defending the provision, National Security Adviser Hermogenes Esperon tells NPR that under the law, "activism is not terrorism."

But lawyer Colmenares argues that, for the Duterte administration, "terrorism is any form of dissent."

Most countries have anti-terrorism laws. The Philippines is no outlier

More than 140 governments have passed anti-terrorism laws since Sept. 11, 2001, with many expanding that legal arsenal over time.

The Philippines' legislation undeniably diminishes due process protections, but it does not widely diverge from what other countries in the region do.

Under the law, a terrorism suspect could be detained for 14 days without charge, a period that can be extended to 24 days. Human rights attorneys say that violates a constitutional provision that a person must be charged within three days of detention.

Esperon, the national security adviser, says it's not possible to build a terrorism case in 72 hours. "We need time to address criminals the likes of terrorists, especially when they're really good at covering their tracks," he says.

He says the government needs strong laws to prosecute militants aligned with the Islamic State and a decades-old communist insurgency.

He notes that the United States has held terrorism suspects far longer than 14 days. "And you keep some of them in Guantánamo, right? For how long?" he says.

The U.S. has held many detainees at the military prison in Guantánamo Bay, Cuba, for over a decade. Forty detainees remained at the facility as of 2019.

Around the world, advocates argue, terrorism suspects held for extended time without a charge could be subject to abuse or even torture.

Esperon says the Philippines' detention period is "one of the most limited" in the region, putting it on par with Australia and well below Singapore's two-year-long period of warrantless arrest for terrorism suspects.

The new law, however, includes a possible punishment of life imprisonment without parole, which rights advocates say leaves no chance for rehabilitation. The law also allows wiretaps and lengthy surveillance, which raises privacy concerns, according to rights activists. 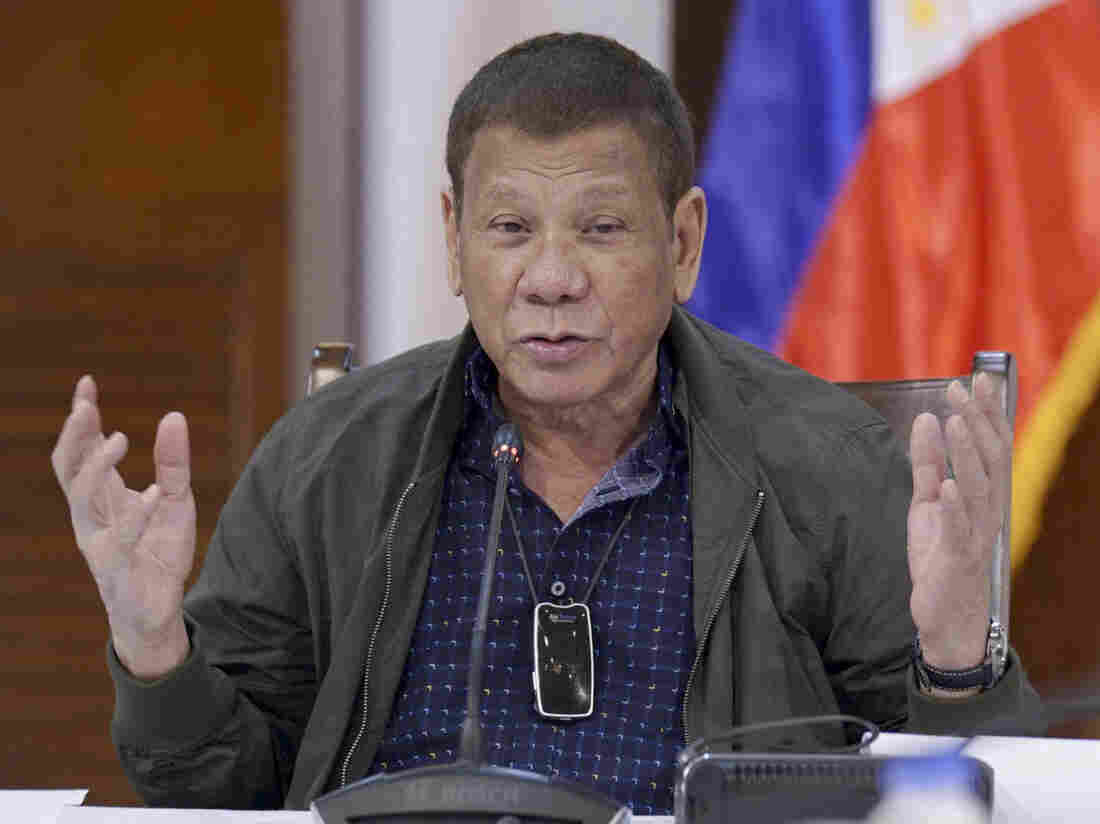 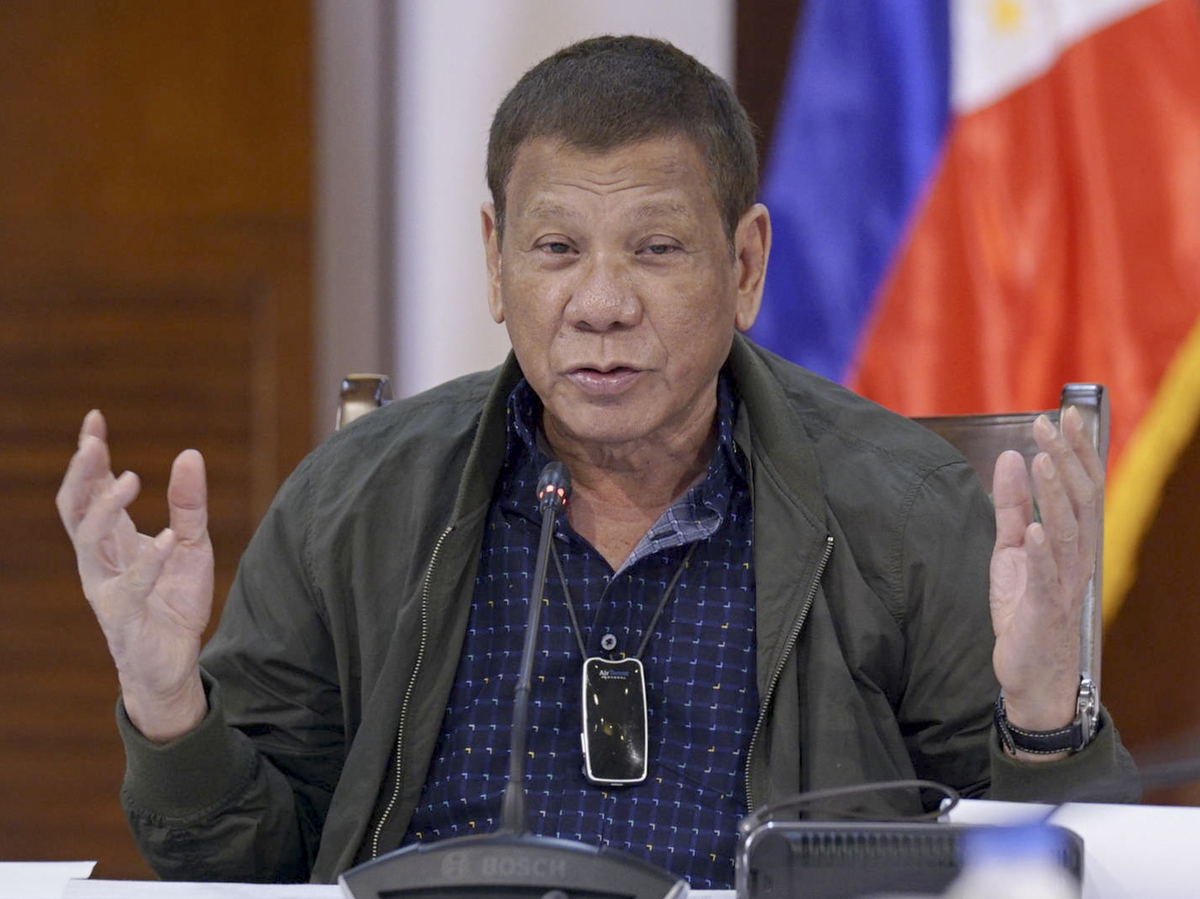 Philippine President Rodrigo Duterte discusses issues related to the new coronavirus during a meeting with an infectious disease task force at the presidential guest house in Panacan, Davao City, southern Philippines, on July 7.

Duterte's drug war has killed at least 8,600 Filipinos since 2016, with "near-impunity," according to a United Nations report in June.

Recently, the government shut down broadcaster ABS-CBN and prosecuted veteran journalist Maria Ressa, CEO of the news website Rappler, for cyber libel, which ended with her conviction. Both outlets have aggressively reported on Duterte's leadership.

'It's Unbelievable': Shutdown Of Philippines' Major Broadcaster Worries Many

'It's Unbelievable': Shutdown Of Philippines' Major Broadcaster Worries Many

The government has also jailed thousands of suspected violators and protesters of a lockdown to contain the rapid spread of the coronavirus.

Attorney Colmenares says, anti-lockdown protesters and violators "are afraid" that putting more power in the hands of police and President Duterte would "triple or quadruple" the arrests.

The new law replaces the 2007 Human Security Act, which security specialist Sidney Jones says was "one of the worst anti-terror laws that was ever passed because it had so many safeguards that it was never used or almost never used."

In the old law, authorities were fined $10,000 for every day a suspect was illegally detained. The new law eliminates that.

But analysts and rights advocates say they're concerned about how Duterte will use the new one.

Countries such as Egypt and Turkey have illustrated how governments led by populists, like Duterte, are using anti-terrorism laws to infringe on civil liberties and consolidate power, according to the Carnegie Endowment's Sobel.

"To me the Philippines is extremely emblematic of that. [Duterte's] firebrand type of speech helped him get elected and for a very long time he's been very popular," Sobel says, "and he's used that to erode civilian checks and balances."