Accessibility links
Jeopardy! Host Alex Trebek Carefully Curates His Responses In New Memoir In his new memoir, the TV icon reflects on his cancer diagnosis and presents brief, sometimes compelling glimpses into his history, as he aims to convince the world he's just an average guy.

In 'The Answer Is ...' Jeopardy! Host Alex Trebek Carefully Curates His Responses

In 'The Answer Is ...' Jeopardy! Host Alex Trebek Carefully Curates His Responses 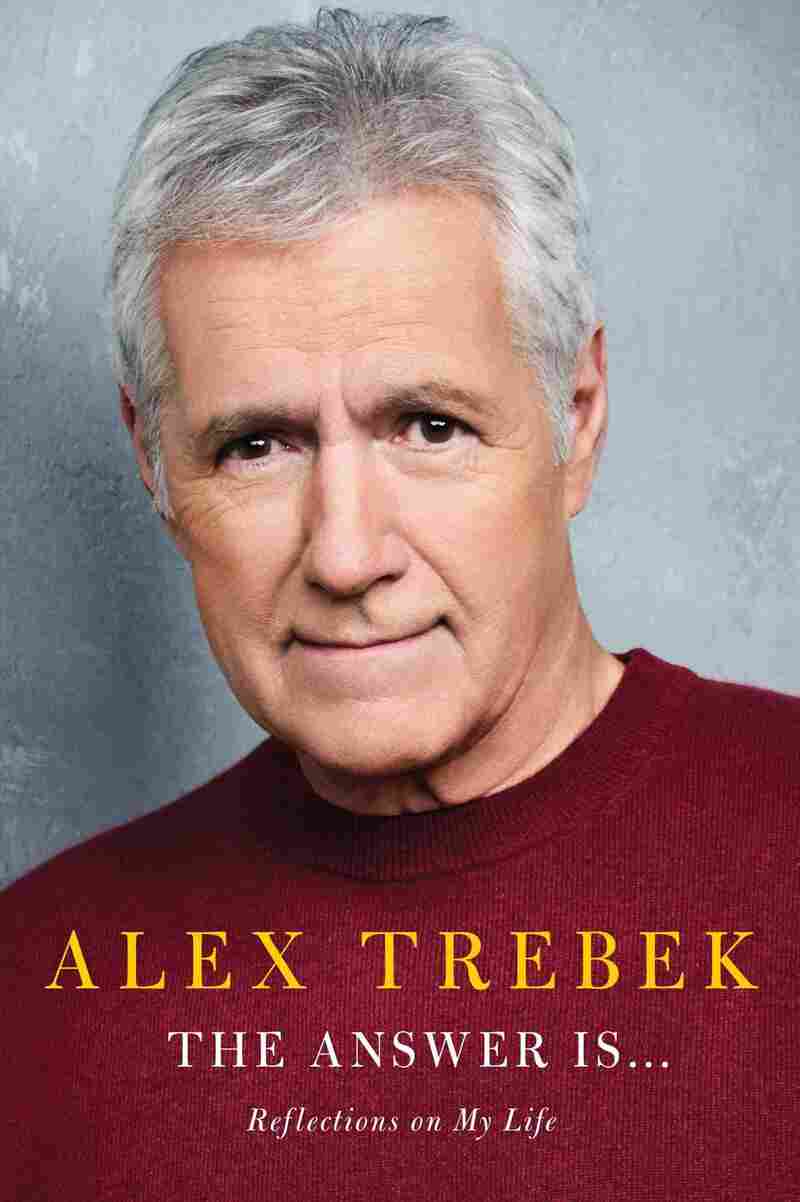 The Answer Is . . .: Reflections on My Life, by Alex Trebek Simon & Schuster hide caption

For a guy who has spent more than 35 years handing out answers as host of the popular TV quiz show Jeopardy!, Alex Trebek holds back a lot of them in his new memoir, ironically titled The Answer Is ...: Reflections on My Life.

Trebek does write about pivotal moments in his personal story: growing up in Canada as the son of a hotel cook and a mother who eventually moved to the United States alone; his work as a young announcer at the Canadian Broadcasting Corporation that honed his craft as an unflappable host; the rumor that he originally got the job hosting Jeopardy!! because the mother of TV syndication mogul Roger King told her son to hire him.

And Trebek writes on weathering the pancreatic cancer that has galvanized fans and led to a worldwide outpouring of support — confirming over a few paragraphs tucked in the middle of page 283, that he will stop treatment for his illness if his current protocol doesn't halt the disease, to preserve his quality of life.

"It wasn't an easy conversation," he writes of the moment when he told his two grown children and wife of his decision, noting they "had a good cry," while absorbing the news.

"I'm not afraid of dying," he continues. "One thing they're not going to say at my funeral as part of the eulogy is 'He was taken from us too soon.' I'm about to turn eighty. I've lived a good, full life and I'm nearing the end of it, I know that." Trebek's birthday is July 22.

Jeopardy! has emerged as one of TV's most successful quiz shows, in part due to its simple, brilliant reversal; the host states the answer and contestants must then figure out the question. Since 1984, Trebek has been the steward of that ritual, reading the answers, guiding the game and tweaking contestants with a genteel formality that has aged well, even as the admittedly private host has avoided saying much about himself.

That changes a bit in The Answer Is... when the host talks about his life with cancer in a chapter titled "What Is...The Will to Survive?" (Every chapter's title is phrased like a Jeopardy! contestant's answer.) He notes the urge to keep himself alive ebbs and flows, depending on his stamina or emotional outlook, foreshadowing the decision he would drop on readers a bit later in the story.

"I don't like to use the terms battling or fighting when talking about cancer," he writes. "It suggests that there are only two outcomes: 'winning,' and 'losing.' If you don't get well, then you are a 'loser.' If you decide to stop treatment, you have 'given up.' That's nonsense."

These are among the most illuminating moments in a book where Trebek often stops short of fully revealing himself. Much of The Answer Is... holds readers at a polite distance, giving them enough details to understand how a working class kid from Greater Sudbury, Ontario became one of TV's most beloved hosts — but not much more.

Trebek admits in the book's introduction he had turned down many previous requests to write a book, agreeing only when his diagnosis with stage IV pancreatic cancer exposed millions of fans who were invested in news about his health and outlook. "I didn't think I had anything pertinent to say to the world," he writes. "And my life was not particularly exciting."

He then spends much of the book's 290 pages seemingly trying to prove that statement — producing a memoir that dwells a lot on the pace of life growing up in Canada and his brief stint in military college, but spends much fewer words on how he connected with the second wife he calls his soulmate.

In the book, Trebek has a tendency to mention things in an offhand way that would be long chapters in a more typical memoir. Like his two heart attacks. Or his struggles with depression. Or the fact that he didn't find out he had a half-brother — a child conceived after his parents separated, who his mother put up for adoption — until just after he started hosting Jeopardy!.

"Because of the way things happened, I had kind of a resentment for my mother," Trebek writes in a passage that takes up just two paragraphs. "But we settled all that before she died — long before she died."

And that's all he says about it.

Don't mistake this criticism for a thirst to see tawdry details or tabloid fodder. But events like these are life-changing moments; struggles which can help define a person and inspire others. These kinds of tales are often the most revealing scenes in good memoirs.

Which is why it feels so odd to read Trebek's polite but insistent way of talking around or past these flashpoints, to spend more time focused on the sportscars he once owned, his penchant for cursing or the three garages he has filled with tools purchased from an out-of-business hardware store.

It seems, in part, a reflection of his approach to celebrity and public life, where he maintains a focused work ethic and down-to-earth humility about his position. Trebek notes, for example, that when he took the job hosting Jeopardy!, he insisted announcer Johnny Gilbert call him "the host," rather than "the star." The show's stars, Trebek says firmly, are its contestants.

There are tidbits here for fans of Jeopardy!. Trebek — who had made a name in American TV game show circles hosting programs like High Rollers and Double Dare — began hosting the show in 1984, reviving it after earlier runs in the 1960s and 70s, to air as a companion in syndication with Wheel of Fortune.

His revelations come mostly in the back half of the book, where he talks about notable champions like all-time winner Ken Jennings and James Holzhauer, the phenom who racked up a 32-game winning streak while choosing tougher, big money questions early to rack up prize money. Trebek notes Jeopardy! creator Merv Griffin also co-wrote the show's theme song, called "Think," which earned him close to $80 million in royalties over a quarter century.

The host says he works two days a week taping Jeopardy!, filming five games a day and changing suits so viewers don't notice. For the show's first three years, Trebek was also a producer; he says his biggest contribution was changing the rules so that contestants couldn't buzz in to answer until he was finished reading a clue, so that cameras could catch which player was first.

"I think the biggest reason the show has endured is the comfort that it brings," Trebek writes. "Viewers have gotten used to having me there, not so much as a showbiz personality, but as an uncle. I'm part of the family...they find me comforting and reassuring as opposed to being impressed by me."

The book jumps around chronologically, which can be a little confusing. Some chapters are only a page or two in length — occasionally, just a paragraph or two — which feels like padding to build the book's length.

Ultimately, The Answer Is... presents some brief, compelling glimpses into Trebek's history and his straightforward approach to life. But readers will have to work through a lot to find those moments, sprinkled through the story of a TV icon who sometimes works way too hard to convince the world he's just an average guy.