Accessibility links
What Is The AFFH Rule Trump Has Moved To Rescind? The president has been talking a lot about suburbs lately, in particular about an Obama-era rule to limit housing discrimination. It appears to be a fear-based tactic to win swing voters. 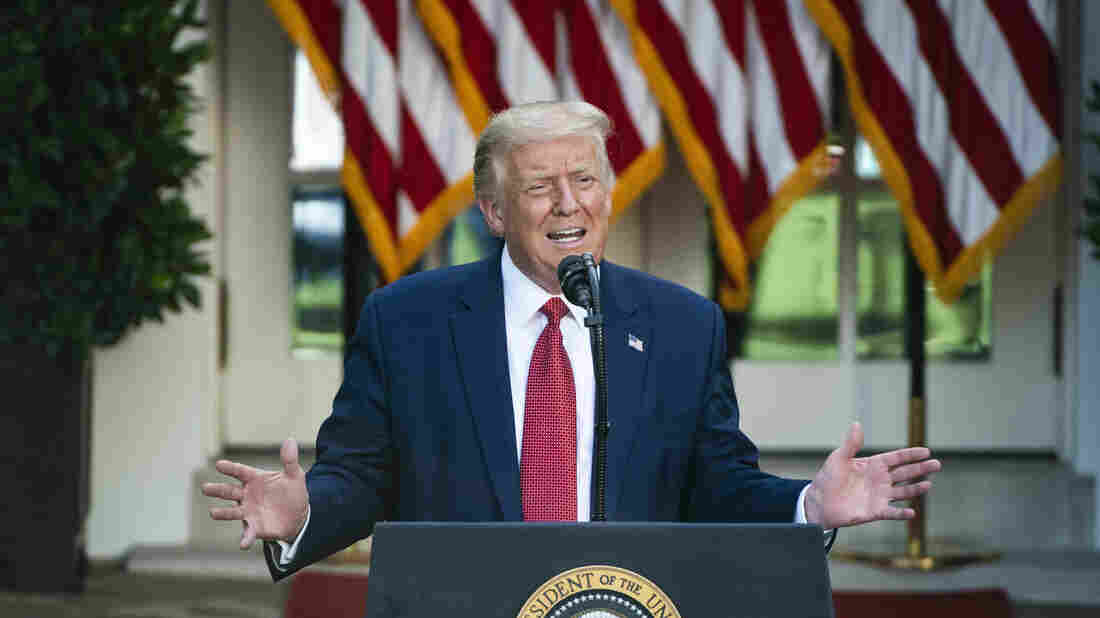 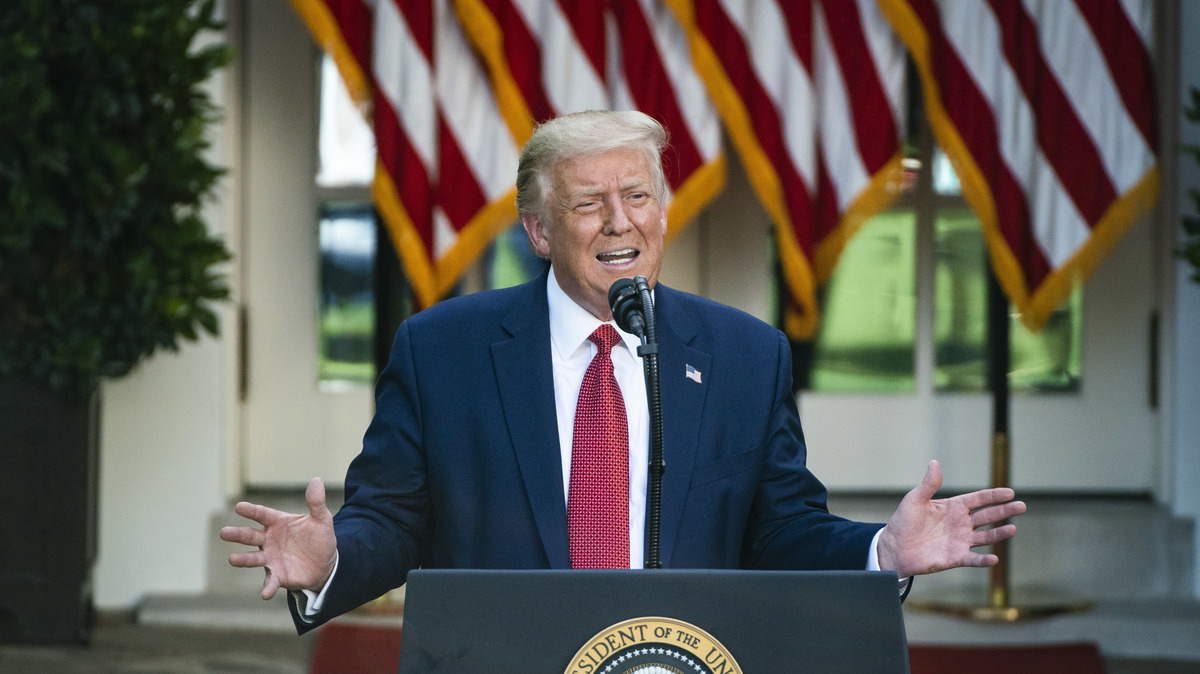 The White House is repealing and replacing an Obama-era rule intended to combat historic racial discrimination in housing.

In a Wednesday announcement, the White House said it would be rolling back the rule as a part of a broader deregulation push.

The rule has gained attention because Trump has been referencing it heavily in his push for suburban voters, falsely saying that former Vice President Joe Biden wants to "abolish" suburbs.

Biden has no such plan, and his campaign calls this argument a "smear."

It's another instance of Trump implicitly using race in his campaign pitch, which he's also been doing explicitly on other issues. In this instance, the president appears to be using a policy to fight housing segregation in an attempt to scare white voters about outsiders coming into their neighborhoods.

In a tele-town hall last week, he said that Democrats want to "eliminate single-family zoning, bringing who knows into your suburbs, so your communities will be unsafe and your housing values will go down."

Trump is doing this while most voters are primarily concerned about the pandemic and the recession, and as his standing with voters has suffered due to his response to that crisis.

Here is a rundown of what Trump is talking about with this housing policy and how it could affect the campaign.

What does Trump mean?

In making this pitch about the suburbs, Trump has been attacking an Obama-era regulation called the Affirmatively Furthering Fair Housing rule, which was meant to combat housing discrimination. (More details on this later.) On his website, Biden says he would implement the rule as president.

Trump has repeatedly attacked the rule for weeks. At the start of July, Trump tweeted that he intended potentially to repeal it.

At the request of many great Americans who live in the Suburbs, and others, I am studying the AFFH housing regulation that is having a devastating impact on these once thriving Suburban areas. Corrupt Joe Biden wants to make them MUCH WORSE. Not fair to homeowners, I may END!

But his administration has been critical of AFFH for a long time. In his January 2017 confirmation hearings, Housing and Urban Development Secretary Ben Carson criticized the rule as an example of federal government overreach.

What does the AFFH rule do?

It tells jurisdictions that receive federal housing funds that they have to assess what patterns of housing discrimination they have and then come up with a plan to diminish them. It also provides a data-based tool for communities to use in doing this assessment.

The rule was implemented in 2015 under the 1968 Fair Housing Act, a federal law that says federal agencies have to administer any housing-related programs "in a manner affirmatively to further" fair housing. Advocates said that the rule at long last gave specificity and teeth to that provision.

"What was on the books wasn't working," said Kathy O'Regan, professor of public policy and planning at New York University, who also worked at HUD under President Barack Obama and helped craft the AFFH rule.

"They had the obligation from the Fair Housing Act," she added. "But HUD had never designed or implemented a robust system to support jurisdictions in meeting those obligations or to enforce jurisdictions meeting [them]."

In practice, that may well look like rezoning in some communities, according to Diane Yentel, president and CEO of the National Low Income Housing Coalition.

"When local communities are required to take a look at how segregation developed in their neighborhoods, most of them are going to find that it was local zoning that led to that purposeful, policy-driven segregation," she said.

So when those cities have to put forward their plans to improve, she added, "most of the time that's going to require that they remove some of those restrictive zoning laws and allow for apartment buildings to be built and put in [neighborhoods zoned for single-family homes], where currently they're not allowed."

Boosting apartment supply would allow people who can't afford those suburban houses to move in.

That, Yentel said, could be what Trump is talking about when he incorrectly says Democrats want to "end single-family zoning."

But on the campaign trail, Trump hasn't been getting into any real policy nuance. He has been using this policy as a steppingstone to talk to white suburban voters about fear of how their communities might change as a result of a race-focused policy.

Trump has some history of clashing with housing discrimination laws; in 1973, he was a defendant, along with his father, in a Justice Department suit saying that their company discriminated against black rental applicants.

What has the rule's status been up until now?

The rule went into effect in 2015, but in January 2018, the Trump administration gutted it, telling cities they no longer had to use the tool (and that they had two more years to submit their assessments).

Now, the Trump administration says it will be replacing the rule with one that will give greater power to local communities. In its announcement, the White House portrayed the Obama version of the rule as an example of federal overreach, and also one that will threaten Americans' ability to buy homes.

What did the AFFH do in suburbs?

The rule didn't explicitly target suburbs, said O'Regan, but she can see it having sizable effects on some suburbs.

"You can imagine if you look at the distribution of where housing that's affordable is and isn't, that you'll see disparities between the suburbs and the cities, particularly the outer suburbs," O'Regan said. "So you can imagine the implication is, you might want to do things differently in the future to address that."

In other words, this sort of rule could put more affordable housing into the suburbs.

"It's very much required a lot of hiring of experts, planners and land-use people and attorneys to create these very complex plans," said Edward Pinto, director of the right-leaning American Enterprise Institute's Housing Center. "The situations in each of those places could be very different. And the first question you have to ask is, how well does that community meet the supply need for housing in that community?"

Either way, O'Regan added, it's hard to know how well the rule limited housing bias because it was only in effect for less than three years under Obama before the Trump administration greatly weakened it. And the process of assessing, planning, potentially rezoning or changing other rules and then following through is years-long.

Why is Trump making this about suburbs?

A likely reason is that suburban voters are key to a Trump victory. Suburban voters — and suburban white women in particular — are valuable swing voters for Trump and seen as necessary to help him win reelection. Suburban voters made up around half of the electorate in 2016.

In his rhetoric about this policy, Trump is saying that "a suburb is the kind of community where great Americans live because we've limited it," said Lynn Vavreck, professor of politics and public policy at UCLA.

"I think it's just straight-up racializing this idea of housing," she said. "This is the kind of argument that Trump makes all the time: 'I'm going to tell you that these people are good, or us versus them. We, the good people, and they, the bad people. And we have to keep them out to keep our greatness.' "