Accessibility links
Review: 'Trouble The Saints,' By Alaya Dawn Johnson Alaya Dawn Johnson's new novel is set in New York on the eve of World War II, in a world where a few lucky (well, not that lucky) people are gifted with "saints' hands," that give them strange skills. 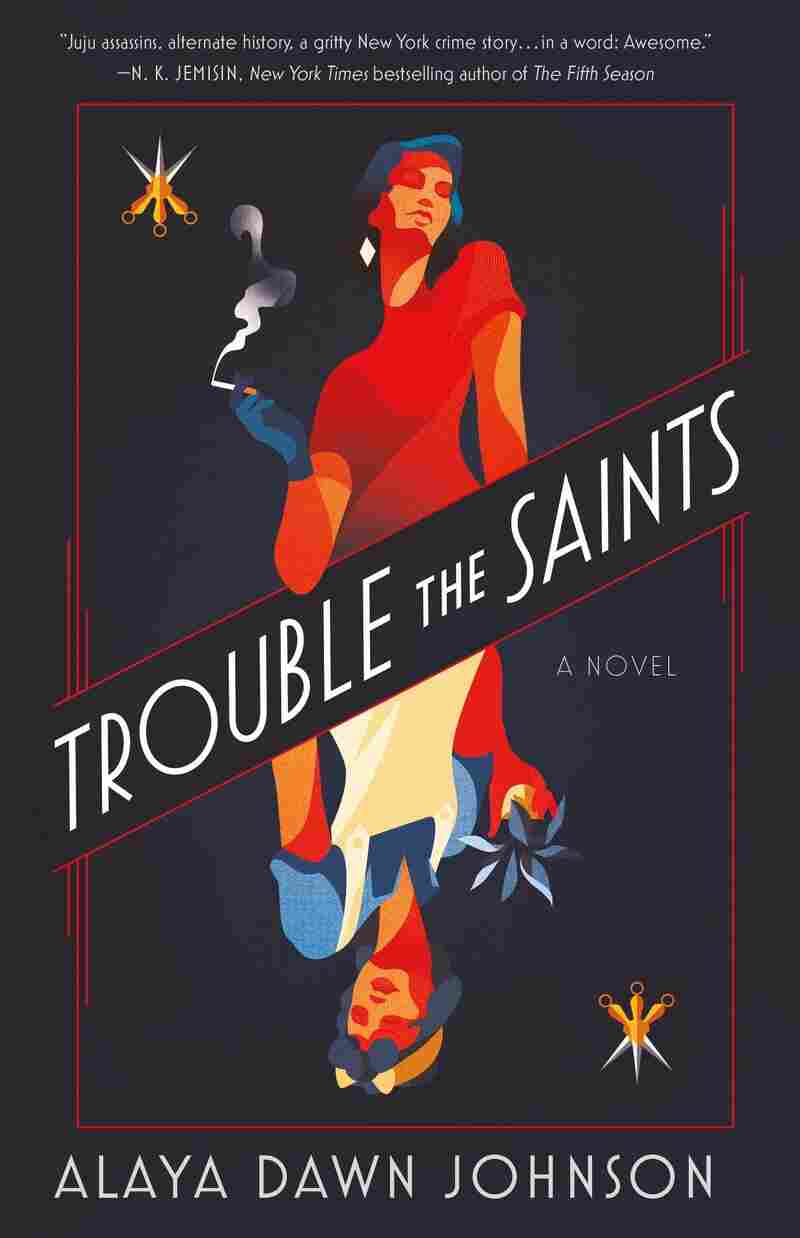 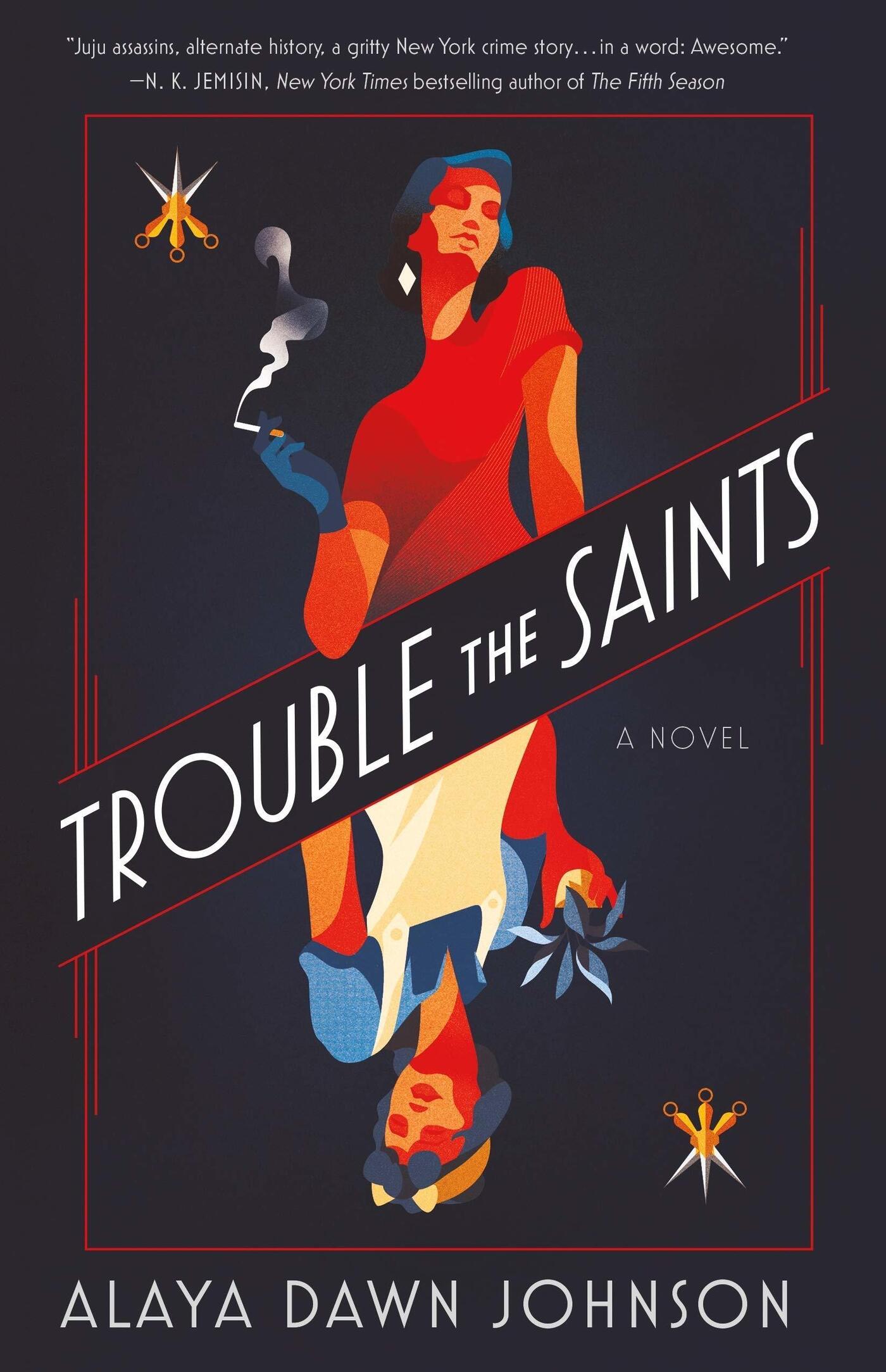 There's a lot of talk about what makes a book an "adult" science fiction or fantasy book recently, or even if those books exist on the shelf (they do, and if you can't find them you're not looking hard enough). Still, sometimes a book takes pains to tell a grown folks' story, and here is where Trouble the Saints, the newest historical fantasy by Alaya Dawn Johnson, comes in.

Trouble opens on a world of mobster crime and racial tensions, where World War II looms like a yawning threat: Not quite slumbering, but not yet as real as it should be. Phyllis (or Pea to those who know her) is a Black assassin for a white mobster, gifted and cursed with both preternatural skilled killer's hands and the ability to pass as a white woman. These "saints' hands" are a rare occurrence that can take many forms — our second protagonist, half-Black and half-Indian Dev, has the hands as well, and they give him the ability to identify threats, a useful skill for a man with many secrets in a world of violence.

As we discover the secrets of the saints' hands, Phyllis struggles against her troublesome gifts. This seems standard enough — the classic noir tale of an assassin desperate to be done with the life. I'd admittedly be into this trope no matter what, but Johnson gives us far more than that. Phyllis chose to trade on her saints' hands and her ability to pass, in exchange for power in a white underworld. When the veneer of a true exchange shatters, she regrets who she has become, torn between Phyllis LeBlanc (crime boss Victor's murdering Angel) and Pea (the Black girl from uptown).

What she's wrestling with aren't the standard noir tropes: Here, Johnson's themes and threats have as much in common with Nella Larsen's Passing and Mat Johnson's Incognegro as they do with any Richard Stark or Raymond Chandler yarn. This only becomes more true as we discover how entwined the saints' hands are with Phyllis's identity (The story starts with a dream, a threat that her hands — or her life — can be taken away).

So it's no surprise that many of the main characters are biracial or light skinned, torn between multiple worlds. Two of our three POV characters are on that list, as well as Walter Finch (Victor's intimidating second in command). Walter himself is a surprising twist; from the beginning, he seems to be only character who is on Phyllis' level, someone you expect to spend the novel hunting her down — and instead his relationship to the protagonists is a rich tangle of roles, personal, professional, and racial.

As much as I loved Walter and Dev, however, some of their racial positioning gave me pause. There were moments where I wondered how much that part of their identity (Walter is Native American and Dev is Indian) was being treated more as window dressing than being Black or white was, for Black and white characters. Johnson struggles with this in her depiction of Dev, who in other ways is just as complex as Phyllis, attracted to her violence but in love with her as a person. Walter is similar, nicknamed Red Man by the white men who fear him. It seems like Johnson intends that problematic name to parallel the way the book sees Phyllis vs. Pea. However, when Walter isn't a protagonist — and he hasn't chosen the name the way Phyllis chose Pea — it doesn't work the same way.

Put together by a masterful wordsmith, 'Trouble the Saints' gives us a tale of how agency doesn't always equal freedom, and solutions don't always lead to success.

I haven't touched on the third protagonist yet, although it is with Tamara that the story's deepest themes switch from subtext to text. Trouble the Saints reveals itself to the reader here as a story about how passivity is choice, and there are no bystanders in the bloody, racially charged world it weaves for us. No one's hands are clean, and acknowledging your choices is just as important as making them. Many of the story's biggest beats happen because someone decides to stand by and let others work, convincing themselves that's not exercising agency. Other beats are fueled by a decision to dive in alone, not allowing others to choose where you stand. Both of those paths are punishing, painful, and move the story forward at a clipping pace.

This is why I can't help but think of the word "grown" when I read Trouble the Saints. Not because of the sexiness, although it has that (there is a complex sometimes-queer story between Phyllis and Tamara that I wish was better developed, and while the sex scenes are usually well done, I'm not sure I will ever recover from the comparison to, uh ... okra ... that happens at one point). It's not because of the violence, although the violence is slick and impressive when we have to wrestle with it.

Trouble is a tale for grown folk because the ending of every story arc could have stood alone as the wrap up of a lesser book. But Alaya Dawn Johnson refuses to allow her protagonists — or her readers — to get out of the repercussions of their actions. The protagonists handle the immediate threats with all the skill and messiness of adults forced into corners, but war, racism, the mob and the law still hang over them. They're only allowed the outs that they have earned — and whether they can ever earn that happiness is the central question of the narrative.

Put together by a masterful wordsmith, Trouble the Saints gives us a tale of how agency doesn't always equal freedom, and solutions don't always lead to success, with characters you desperately hope make the right choice — even when that choice doesn't exist.