Accessibility links
Behind The Scenes With 'Floor Is Lava' Star ... Lava: Saucy, Slimy, Super-Secret The premise of the Netflix game show may be simple, but the gurgling goop is not. The magma is the result of months of work by Hollywood's top slime manufacturers. Fun fact: It smells like bubble gum. 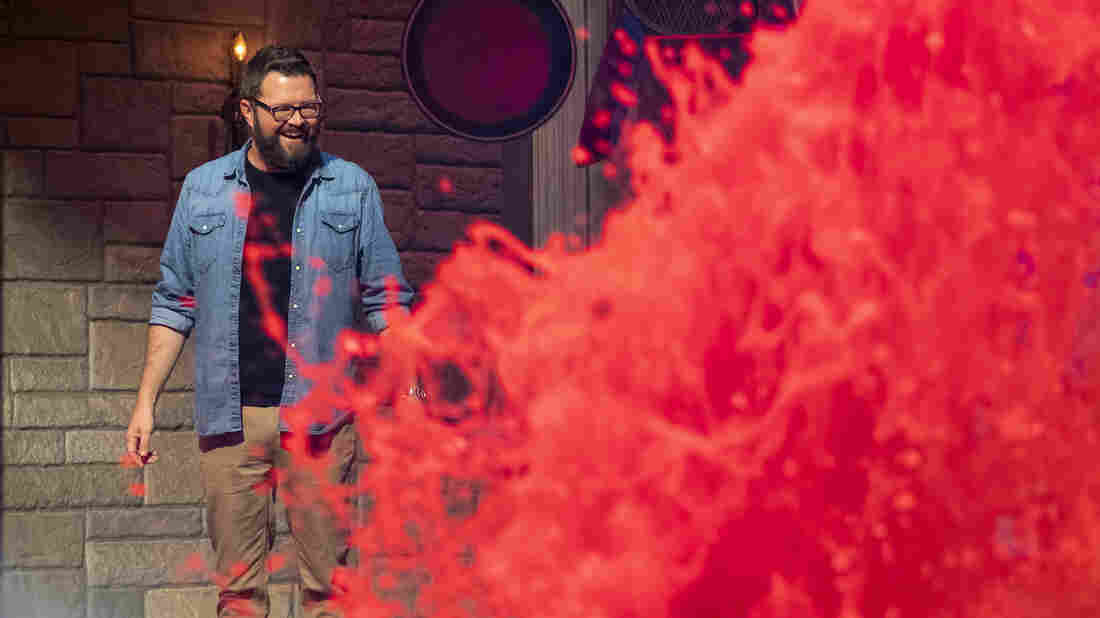 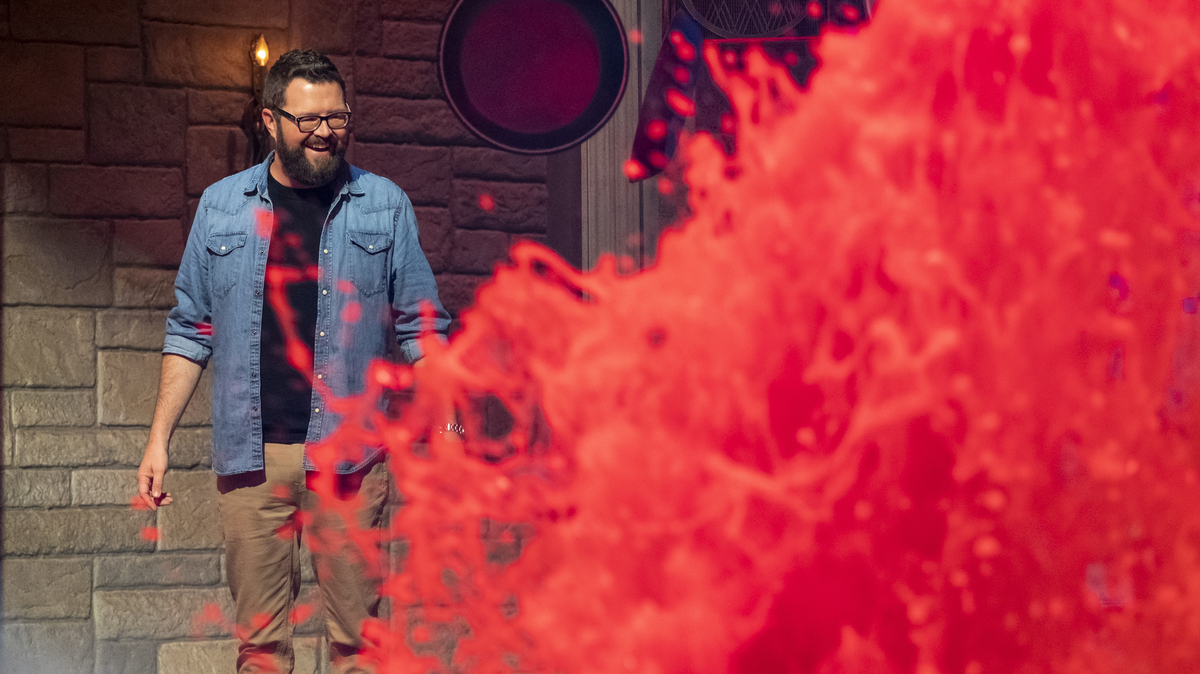 Rutledge Wood hosts the Netflix game show Floor Is Lava, which is shot in an old IKEA warehouse in Burbank, Calif.

If you've already watched the hit Netflix gameshow Floor Is Lava, you know the rules: "Don't fall in," host Rutledge Wood warns contestants, as they enter an obstacle course filled with 80,000 gallons of gurgling goop, "because the floor ... is ... lava!"

It's a goofy grown-up take on a kids' playtime staple, rebranded for adults as "the hottest game show in history." Successfully traverse a chamber without falling into the sloshing "lava" below, and teams of three earn points. Fastest team wins a $10,000 prize — and a lava lamp. That's it.

That's the set-up for Netflix's Floor Is Lava, which debuted in June and soon topped the streaming service's list of most-watched shows in the U.S. But if that premise sounds simple, the real star of the show — that aforementioned soupy lava — is anything but.

"Look, we put a lot of research and money into trying to figure out what our lava was," showrunner Anthony Carbone told NPR from Los Angeles. "That's why we want to keep it our secret."

It's not just dyed water or trick lighting. The lava undulates. It glows. It even belches, splashing contestants and slickening surfaces players need to land on.

"It's hot!" a player yelps at one point, after getting sprayed. (Co-creator Megan McGrath wouldn't say whether the synthetic lava feels hot, but she did insist "it's not hot enough to burn you.")

The "proprietary blend" of slime, as the executive producers call it, is so secretive that only a handful of crew members knows the formulation. Art directors and set designers signed non-disclosure agreements.

And it does look and feel saucy, with a distinct luminosity. The closest approximation Carbone could think of? "Panda Express' orange chicken sauce," he said.

Although he assured the lava is food-grade for safety, he can't describe the flavor. "Touched it, smelled it, never tasted it!"

To achieve just the right slipperiness, executive producer Irad Eyal said the team enlisted Hollywood's top slime manufacturers. For months, labs sent barrels of slime to dump into plexiglass boxes, he said. Producers would light it and throw items into it to watch how the slop would behave. To mimic the glow of liquid magma, chemists proposed adding glow-in-the-dark chemicals. Eyal said the team scrapped that idea for a sensible reason: "It turns out that in large doses, that stuff is very toxic." 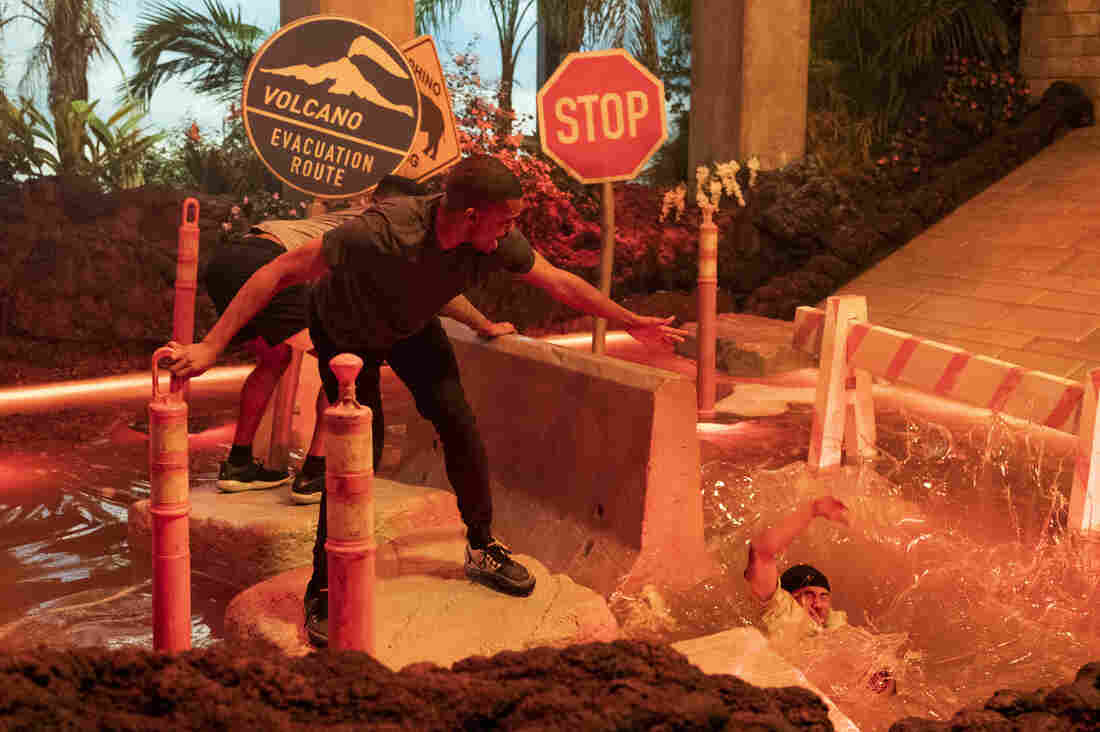 Contestants compete to win $10,000 — and a lava lamp — on Floor Is Lava. Adam Rose/Netflix hide caption

Cleanup is a whole system, too. Floor is Lava is shot in an old IKEA warehouse in Burbank. The set can be drained and refilled with 80,000-100,000 fresh gallons of slime. Between obstacle rounds, technicians wearing waders will use squeegees to de-glaze obstacles and "thousands" of towels to wipe down props, Carbone said.

Although executive producers wouldn't disclose how deep the lava goes, co-creator McGrath did say viewers can at least imagine what a chamber filled with slime might smell like. The crew voted on a scent, she said, and picked something sweet.