Accessibility links
Jordan's Prime Minister Says His Country Contained COVID-19 By 'Helping The Weakest' Prime Minister Omar Razzaz tells NPR Jordan is determined to protect the most vulnerable and "went for a very different model ... based on social solidarity." There have been just 11 COVID-19 deaths. 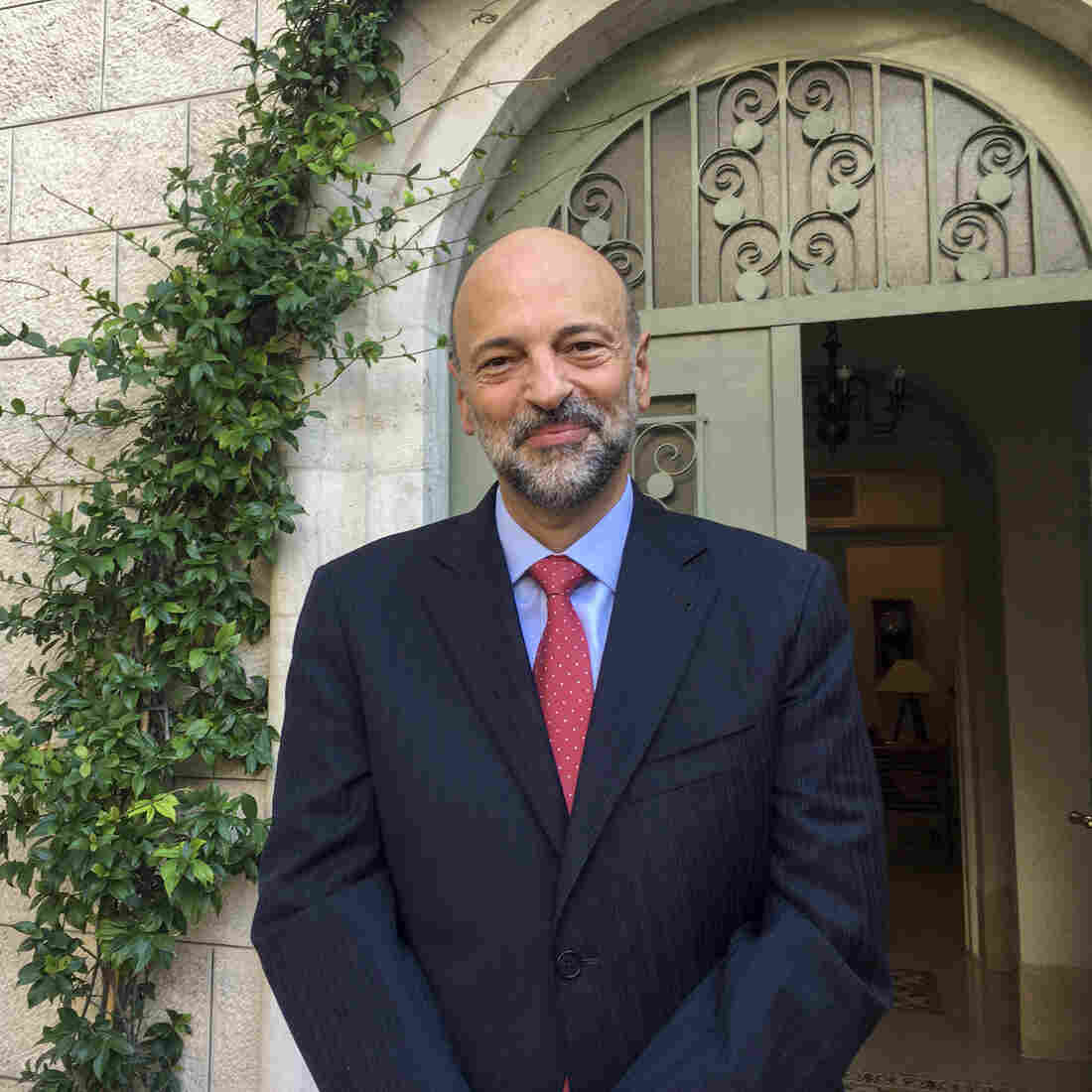 "From day one, any discussion of herd immunity or survival of the fittest or, you know, 'Say farewell to the elderly,' are the things that just did not sound right for us," Jordan's Prime Minister Omar Razzaz tells NPR. "So we went for a very different model in Jordan, based on social solidarity." Jane Arraf/NPR hide caption 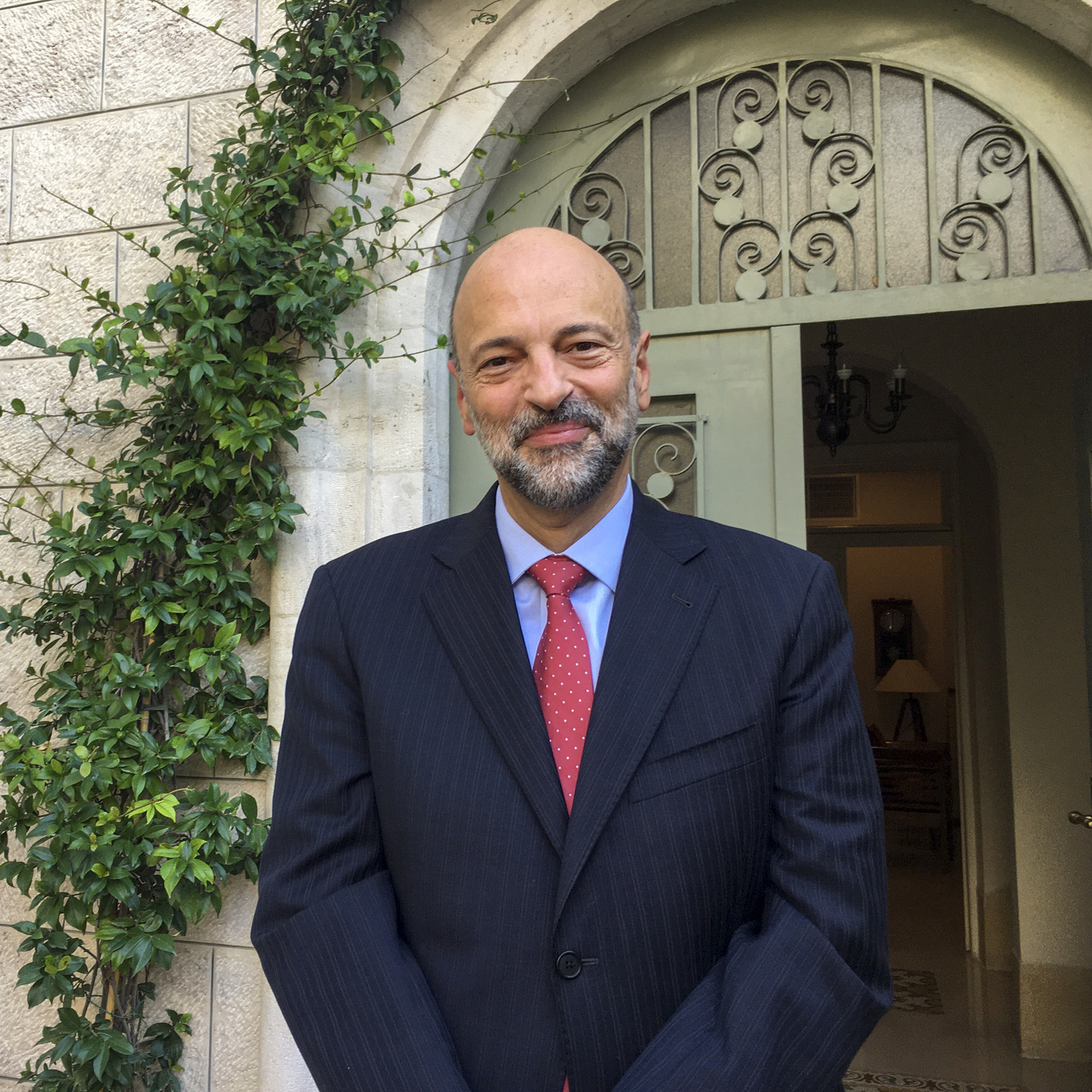 "From day one, any discussion of herd immunity or survival of the fittest or, you know, 'Say farewell to the elderly,' are the things that just did not sound right for us," Jordan's Prime Minister Omar Razzaz tells NPR. "So we went for a very different model in Jordan, based on social solidarity."

Jordanian Prime Minister Omar Razzaz sits in the front room of his family home in a middle-class Amman neighborhood of traditional white stone houses with small gardens and low walls. Unusually, in a region where senior officials typically live in gated compounds far from public view, the residential street has been kept open to traffic to minimize disruption to Razzaz's neighbors.

Razzaz, an MIT and Harvard-educated economist, was appointed by Jordan's King Abdullah II to head a new government two years ago, following anti-government protests that were sparked by IMF-mandated tax increases seen as bypassing the rich. Although he'd served previously as education minister, Razzaz was seen as a relative outsider.

The small, resource-poor kingdom is surrounded by dangers from neighboring countries: a war in Syria, conflict between the U.S. and Iran in Iraq, and Israeli plans to annex parts of the West Bank it occupies — something Jordan says poses a danger to the entire region.

But those issues have taken a back seat to controlling the coronavirus — a feat Jordan has accomplished with an early and severe lockdown. The country of roughly 10 million has registered 1,131 coronavirus cases, with 11 deaths.

Razzaz sees vulnerable groups in other countries paying a disproportionate price for policies that don't prioritize them, and says Jordan's approach from the start was to protect the most vulnerable.

"From day one, any discussion of herd immunity or survival of the fittest or, you know, 'Say farewell to the elderly,' are the things that just did not sound right for us," Razzaz tells NPR. "So we went for a very different model in Jordan, based on social solidarity, in fact, helping the weakest. We did everything we can to make sure our children, our elderly, our refugees — you know, the haves and the have-nots — are protected."

In mid-March, Jordan was one of the first countries in the region to shut its airports and borders for all but essential goods. Arriving passengers were sent into compulsory quarantine. All but emergency workers and security forces were confined to their homes, with even grocery stores shut and the army distributing bread to poor neighborhoods.

The government cut public sector salaries and allowed businesses to reduce workers' wages, but banned them from laying off employees.

Razzaz says in the last four months, almost half of Jordan's population received some form of government assistance.

This week, the country announced it would reopen its airport to flights from a dozen countries where coronavirus rates are also low. With no cases of local transmission on most days, Jordan has stopped enforcing mask wearing and reopened restaurants and shopping malls.

Razzaz says industry production is now back to pre-coronavirus standards, and Jordan is exporting pharmaceuticals and food to other countries.

Jordan took a chance with the lockdown, he says, but felt it had little choice, given the prospect of its health care system being overwhelmed with COVID-19 cases.

"When we took the steps that we took, we did that not because we were certain about the outcomes. So there's always hindsight ... But we're very, very glad we did what we did. And a lot of countries that waited longer, including the U.S., ... are having a harder time containing the coronavirus," he says.

Razzaz and health officials note Jordan remains on guard for a possible resurgence of the virus as its airport reopens.

The longer-term challenge is an already fragile economy in which unemployment is rising sharply. Tens of thousands of Jordanians have lost their jobs in the Arab Gulf states, as those economies decline due to the pandemic and a plunge in oil prices.

The official unemployment rate for the first quarter of the year had already topped 19%. Some economists expect the real rate could reach 30% by the end of the year, with many of the unemployed young people.

Razzaz says, though, he is not worried by the prospect of renewed demonstrations that could be sparked by the economic crisis.

"While some countries worry a lot about social unrest, we see it as people expressing views about that hardship," he says. "We're going to be proactive with employment and job creation. And if you get frustrated and want to shout, we have a constitution and set of laws and institutions that allow that to happen in democratic ways."

The other wild card facing the kingdom is Israel's annexation threat. Jordan, along with Egypt, is one of only two Arab countries in the region to have signed a peace treaty with Israel. Jordan's king says he might suspend the 26-year-old treaty if Israel takes unilateral steps to claim sovereignty over parts of the West Bank.

Israel cites Jewish ties and a strategic need for it, but most of the international community opposes such a move, which could doom Palestinian hopes for an independent state.

Jordan, where a majority of citizens are of Palestinian origin, would be the country most affected by Israel's move, and instability could ripple across the region.

Razzaz says Jordan has not changed its insistence on the need for an independent Palestinian state alongside Israel.

"If you don't provide a just solution for the Palestinian people and sovereignty, you are pushing them and the region towards despair and extremism. So will there be conflict under such conditions? Yes, there will be, definitely," he says. "I think what His Majesty and Jordan have been doing is sounding the alarm bells."