Accessibility links
Border Patrol Response To Portland Unrest: Straying From Mission Or Continuing One? Images of federal officers making arrests have alarmed critics who think President Trump is using the officers to trample civil rights and appear as a law-and-order candidate ahead of elections.

Listen · 4:06 4:06
Border Patrol Response To Portland Unrest: Straying From Mission Or Continuing One? 4:06 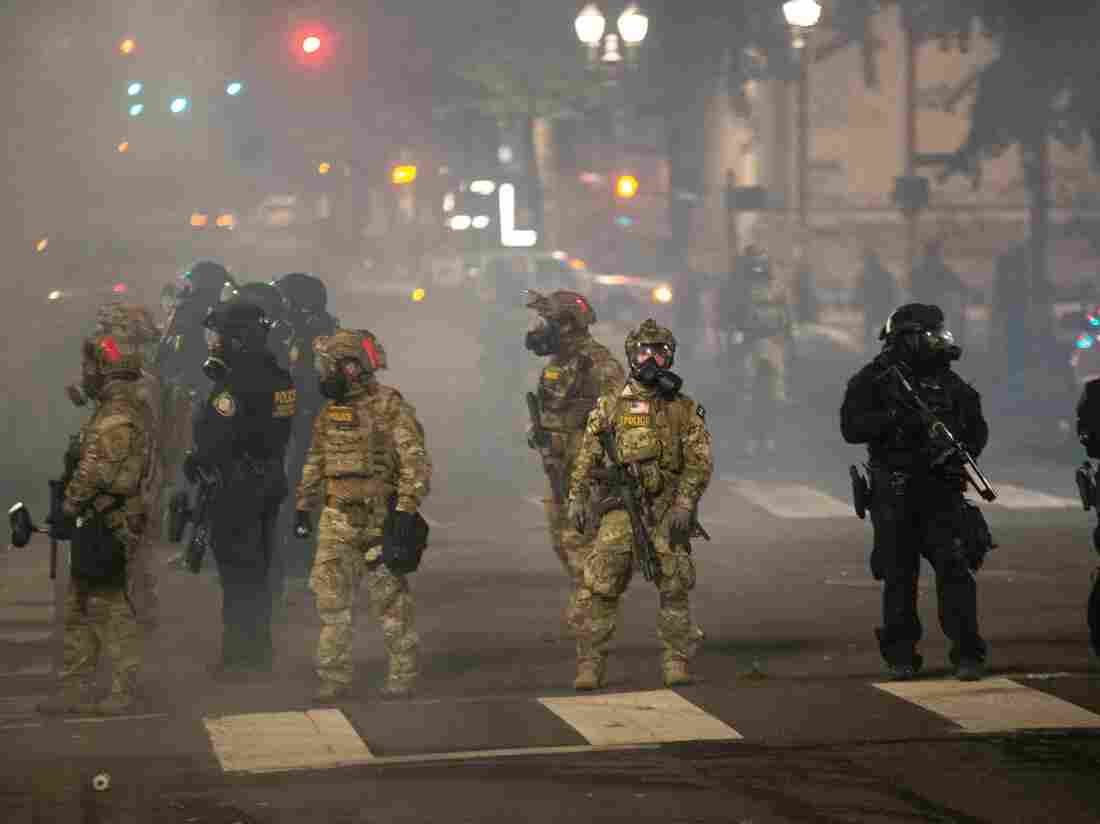 Federal police stand guard on Salmon Street after pushing protesters away from the Mark O. Hatfield U.S. Courthouse on Tuesday in Portland, Ore. The federal police response to the ongoing protests against racial inequality has been criticized by city and state elected officials. Nathan Howard/Getty Images hide caption 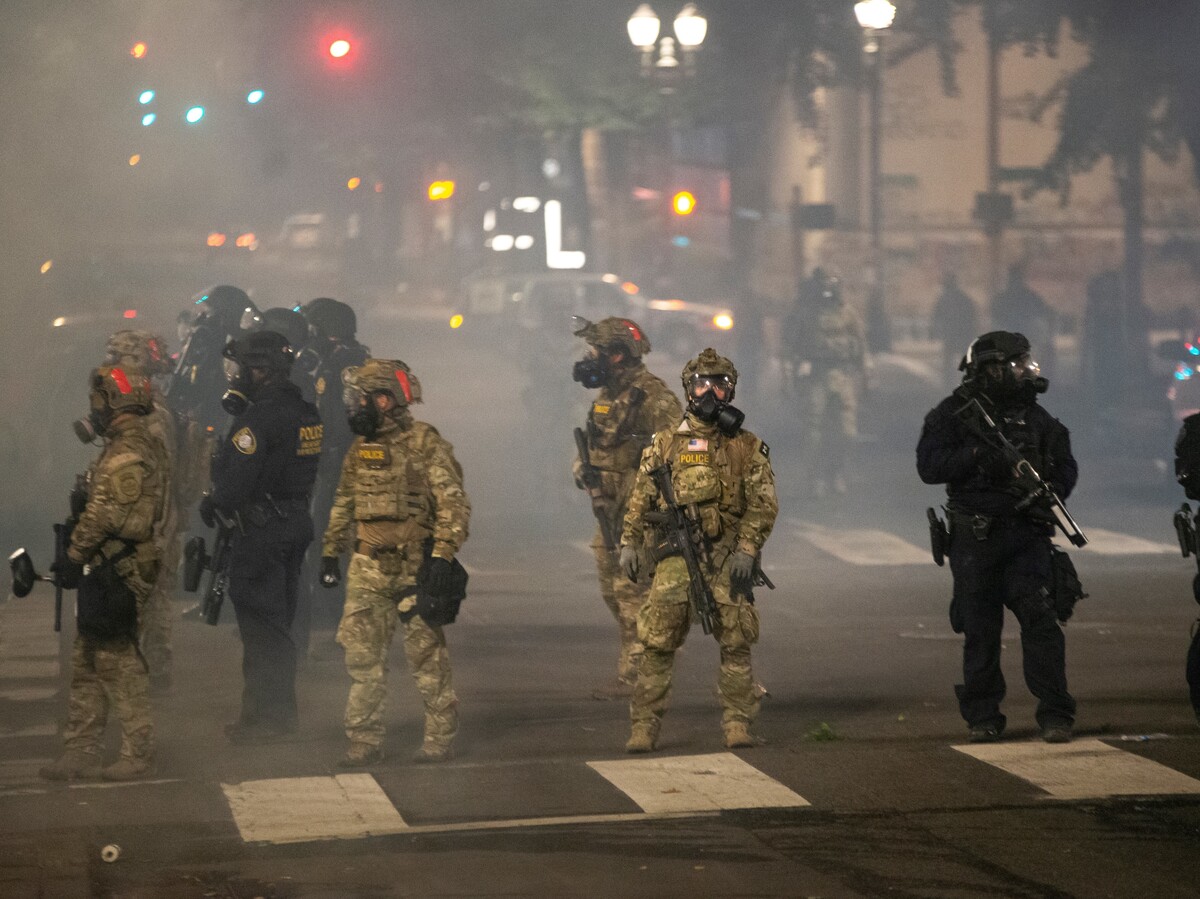 Federal police stand guard on Salmon Street after pushing protesters away from the Mark O. Hatfield U.S. Courthouse on Tuesday in Portland, Ore. The federal police response to the ongoing protests against racial inequality has been criticized by city and state elected officials.

When Border Patrol agents were dispatched earlier this month to Portland, Oregon, it wasn't the first time they've taken on urban policing far from their duties on the nation's frontiers.

The agents deployed to Los Angeles, for instance, after the Rodney King verdict in 1992. Alongside local police and National Guard, the green-suited border agents were there to quell riots but drew a lot of criticism for also conducting immigration sweeps of people in the country illegally.

Nearly three decades later – as debate rages over federal agents in Portland – questions remain about whether the Border Patrol gets appropriate training to handle civil unrest. The Trump administration is refusing to recall federal agents from the city, where racial justice protests have been ongoing for more than 50 days.

Much of the controversy has stemmed from agents using unmarked vehicles to grab protesters off the streets. Critics say they didn't have probable cause and didn't properly identify themselves. Last night, Portland Mayor Ted Wheeler called the federal deployment an "unconstitutional occupation," and was later tear gassed while in the crowd.

Images of federal officers in camouflage uniforms making arrests on the streets of Portland, have alarmed critics across the country who think President Trump is using federal officers to trample civil liberties and paint himself as the law-and-order candidate heading into the November election.

Among the skeptics is Gil Kerlikowske, former commissioner of U.S. Customs and Border Protection under President Barack Obama.

Kerlikowske asserts the Border Patrol unit known as BORTAC, which was dispatched to Portland, is chiefly trained to pursue fugitives and criminals.

"This is clearly an urban environment and civil unrest. It is not in their wheelhouse," he said. "I mean, they track people. "We've used them in upstate New York to track fugitive escapees. We've used them to track people who shot state troopers in Pennsylvania."

But federal officials say their agents are acting within the law — and have been doing these kinds of operations for decades.

Victor Manjarrez Jr. was a young Border Patrol agent in the 1990s and eventually became a sector chief. He said the Border Patrol sent 600 of the 1,000 federal officers deployed to Los Angeles during the Rodney King unrest, and that the border agents were not trained back then like they are today.

"The big difference now is you have folks that have specialized training in riot control," said Manjarrez, now the associate director for the Center for Law and Human Behavior at the University of Texas at El Paso.

Officials with the Department of Homeland Security, which includes CBP, insist BORTAC is not being used as Trump's secret police. The officials said the agents are trained to put down prison riots, and have broad authority to assist federal law enforcement anywhere in the U.S.

In Portland, they were protecting federal buildings because the protesters had grown so violent, said Acting CBP commissioner Mark Morgan.

The agents' names are not on their uniforms, officials say, because protesters have identified some of them and posted the information on social media. The agents use unmarked vehicles so they won't be torched or vandalized, Morgan said, and they wear flak vests emblazoned with "POLICE" as well as smaller, light-colored CBP patches.

"I've seen news reporting after news reporting, tweet after tweet, saying 'unidentified, masked storm troopers,' " Morgan said at a press conference this week. "It is offensive to refer to these dedicated men and women that are out there as law enforcement professionals, to make that reference."

There are other precedents for deploying Border Patrol into the interior of the country. In 1962, they were deputized as U.S. Marshals to protect James Meredith, the first Black student entering the University of Mississippi. And in 1987, they retook control of a federal prison in Louisiana that had been overrun by Cuban inmates.

Today, some Democratic mayors and members of Congress have called these teams of agents "unwanted, occupying forces" whose presence escalates street violence, and they've asked the White House to remove them.

But more are on the way. Trump Administration officials say DHS investigators are among federal squads rushing to Chicago, Albuquerque and Kansas City. They'll be there to help combat rising crime – not to take back the streets from protestors.