Accessibility links
Canada-U.S. Asylum Treaty Ruled Unconstitutional Because Of 'Cruel' Conditions For years, refugees seeking asylum at the official ports of entry on the Canadian border have been turned back. But now a judge rules U.S. treatment of the returned refugees violates human rights. 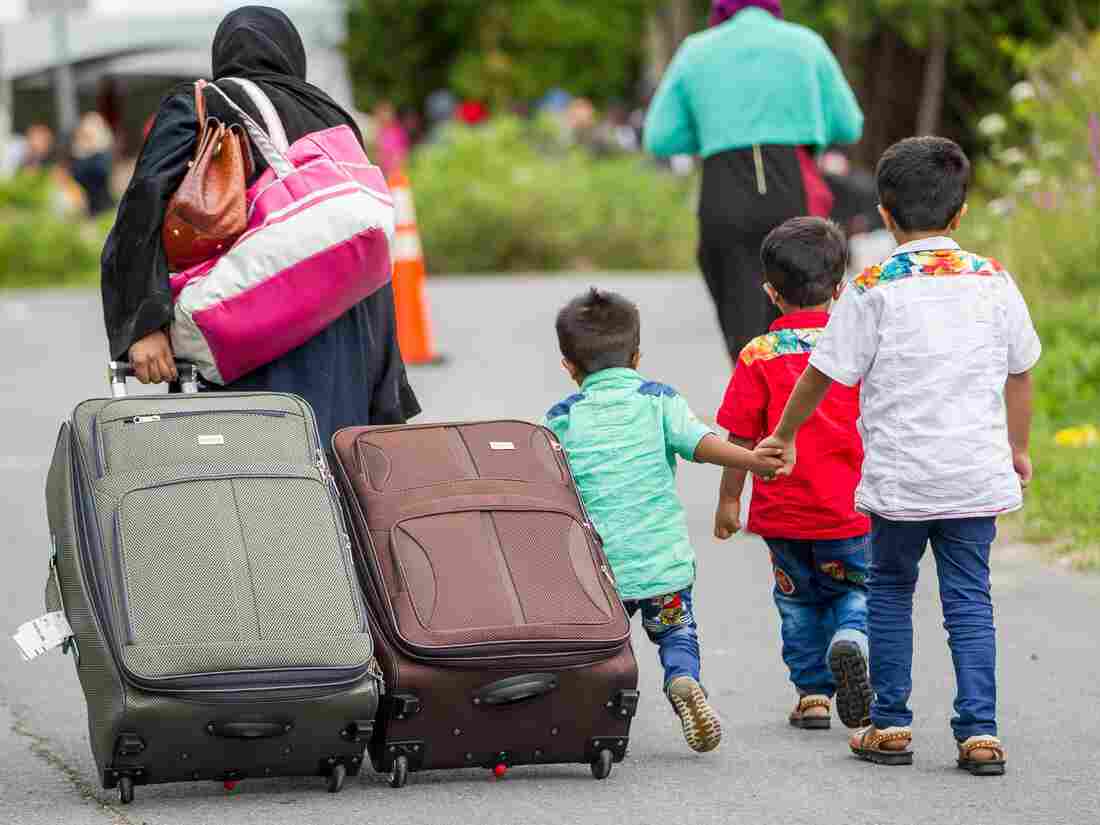 Asylum-seekers walk along Roxham Road near Champlain, N.Y., in August 2017, a popular illegal border crossing into Canada, away from official ports of entry. Geoff Robins/AFP via Getty Images hide caption 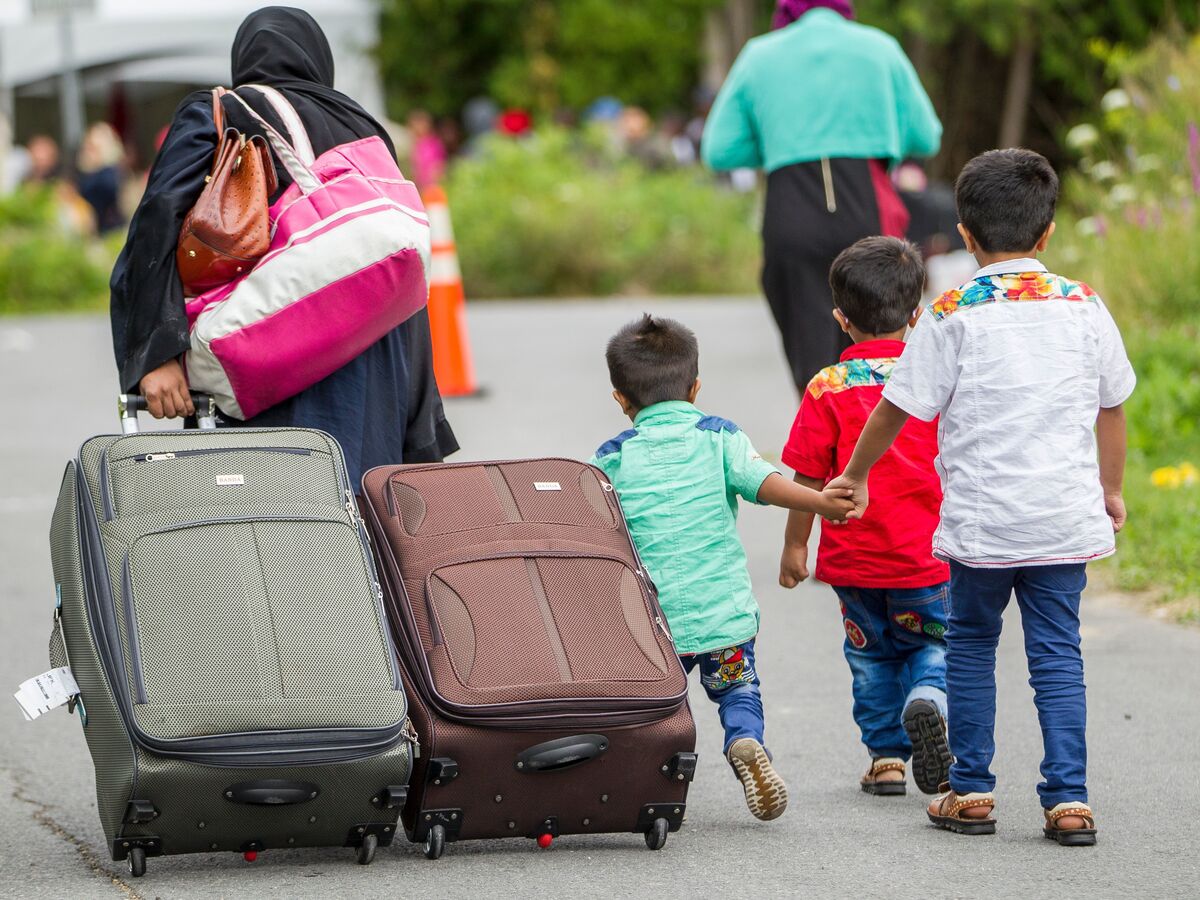 Asylum-seekers walk along Roxham Road near Champlain, N.Y., in August 2017, a popular illegal border crossing into Canada, away from official ports of entry.

In a harsh rebuke of America's treatment of refugees, a Canadian judge has ruled that an asylum treaty with the U.S. violates Canada's own charter of human rights, because it returns asylum-seekers to the U.S., where they are "immediately and automatically imprisoned" by U.S. authorities, often under inhumane conditions.

The "Safe Third Country Agreement" denies refugees the right to enter Canada if they had crossed through another country that offers human rights protections. Since 2004, the U.S. has been designated as a "safe" country — so any refugees entering Canada through official checkpoints have usually been turned away. Judge Ann Marie McDonald ruled Wednesday that the agreement violates Canada's charter because of what happens when the refugees are taken into U.S. custody.

Refugees are returned to the U.S. "based on the understanding that they will have access to a fair refugee determination process," McDonald wrote. "However, the evidence demonstrates that the immediate consequence to ineligible STCA claimants is that they will be imprisoned solely for having attempted to make a refugee claim in Canada."

It's a clear penalty imposed on refugees for merely attempting to seek asylum, the judge said. "The penalization of the simple act of making a refugee claim is not in keeping with the spirit or the intention of the STCA," McDonald wrote, citing "cruel and unusual detention conditions" upon returning to the U.S.

The agreement runs afoul of the Canadian constitution's promise of "life, liberty, and security of the person," the judge wrote. "Imprisonment and the attendant consequences are inconsistent with the spirit and objective of the STCA."

The legal challenge was brought by citizens of El Salvador, Ethiopia and Syria, all of whom sought refugee protection in Canada. Some said they were fleeing gang violence, some persecution based on their gender. But because they arrived from the U.S. at an official port of entry, they couldn't make refugee claims — and were immediately returned to the U.S. and imprisoned for weeks or months.

In sworn affidavits, asylum-seekers explained how they found themselves in the U.S. — and spoke of psychologically brutal conditions they encountered upon being turned away from the Canadian border.

Nedira Jemal Mustefa, a Muslim woman from Ethiopia, came to the U.S. for medical treatments when she was 11 years old. She entered the country on a visitor's visa and ended up staying for several years, graduating from a Georgia high school in 2015.

Because she had arrived in the U.S. after the cut-off date to apply for the Deferred Action for Childhood Arrivals program, she couldn't get proper documentation to continue her studies in the country. But she also didn't want to return to Ethiopia, as she was a member of the Oromo ethnic group, which faced persecution by the Ethiopian government.

She asked Canada for refugee protection, but — after being questioned for 30 hours at the port of entry — was returned to the U.S. There, officials placed her in detention at the Clinton County Correctional Facility in Pennsylvania. She was held in solitary confinement for a week to await results of a tuberculosis test.

Mustefa called her time in solitary confinement "a terrifying, isolating and psychologically traumatic experience." She wasn't told how long she would be kept in solitary. She believes the guards were feeding her pork, despite telling them she couldn't consume it for religious reasons. She skipped meals and lost nearly 15 pounds.

Upon her release from solitary, she spent the next three weeks among the general prison population, where she said was held in a "freezing cold" facility with people who had been convicted of crimes. Mustefa said she "felt scared, alone, and confused at all times."

Her imprisonment upon being returned to the U.S. "is a clear illustration of the limitation on liberty" faced by refugees found ineligible under the STCA, the judge wrote.

Advocates involved in the case, as well as asylum experts familiar with the ruling, praised the decision as a significant win for the rights of refugees — and a damning indictment of U.S. policies under President Trump.

"A Canadian judge heard the stories of people who had been in immigration detention in the US and she found that their treatment shocked the conscience and violated fundamental human rights," said Janet Dench, executive director of the Canadian Council for Refugees, which challenged the agreement along with Amnesty International and the Canadian Council of Churches.

The judgment striking down the STCA won't take effect for six months. The judge said this would give the Canadian Parliament time to respond. If the decision ultimately stands, refugee processing at the U.S.-Canada border would go back to what it was before the U.S. was designated a safe country in 2004. Asylum-seekers won't have to risk entering Canada in between official checkpoints.

"Unfortunately because of the STCA many people have taken dangerous journeys, suffering in some cases frostbite, and many have been exploited by smugglers, as they attempt to enter Canada," Dench told NPR. Entering Canada through an official port "will be much safer for them," she said.

According to the Canadian government, since Trump took office, more than 58,000 refugee claims have been made by "irregular border crossers" — refugees who didn't enter through official ports. But Prime Minister Justin Trudeau said in March that Canada would turn back those asylum seekers until the coronavirus crisis is under control, in an effort to protect Canadian citizens from infection.

Anwen Hughes, a refugee lawyer in New York, said she was pleased to see the court recognize the human rights violations her group has documented for years. "At the same time it is dismaying to me as a U.S. lawyer that these violations continue here," said Hughes, who testified in the case. "The treatment of asylum seekers by the U.S. government has actually deteriorated markedly since evidence was taken in this case, so these concerns are not going away."

"It should be a wake-up call to the U.S. government that we, as Americans, need to do better," Collopy told NPR. "We need to completely reform our asylum system so that it is one that provides meaningful access to protection, not one that results in further harm of victims and, ultimately, a return to the persecution and torture from which they fled."

The Canadian government could appeal the ruling; ultimately it might be up to the Supreme Court of Canada to decide the fate of the treaty. If the decision stands, "it means that asylum seekers who are being wrongfully denied asylum in the United States would have a second chance in Canada," said Lindsay Harris, director of the Immigration and Human Rights Clinic at the University of the District of Columbia.

To Harris, the U.S. treatment of asylum-seekers since Trump took office "defies logic, morality, and also international law," she said. "The punitive measures the Trump Administration have taken against asylum-seekers, the result of racial animus and xenophobia, make it impossible for a court paying attention to rule any other way than to say the U.S. is no longer welcoming to refugees and asylum-seekers."