Accessibility links
Protesters In Russia's Far East Challenge Putin's Authority, Demand His Resignation The arrest of a popular regional governor has led to protests demanding his release. Amid the pandemic and an economic downturn, the protests pose an additional challenge for President Vladimir Putin. 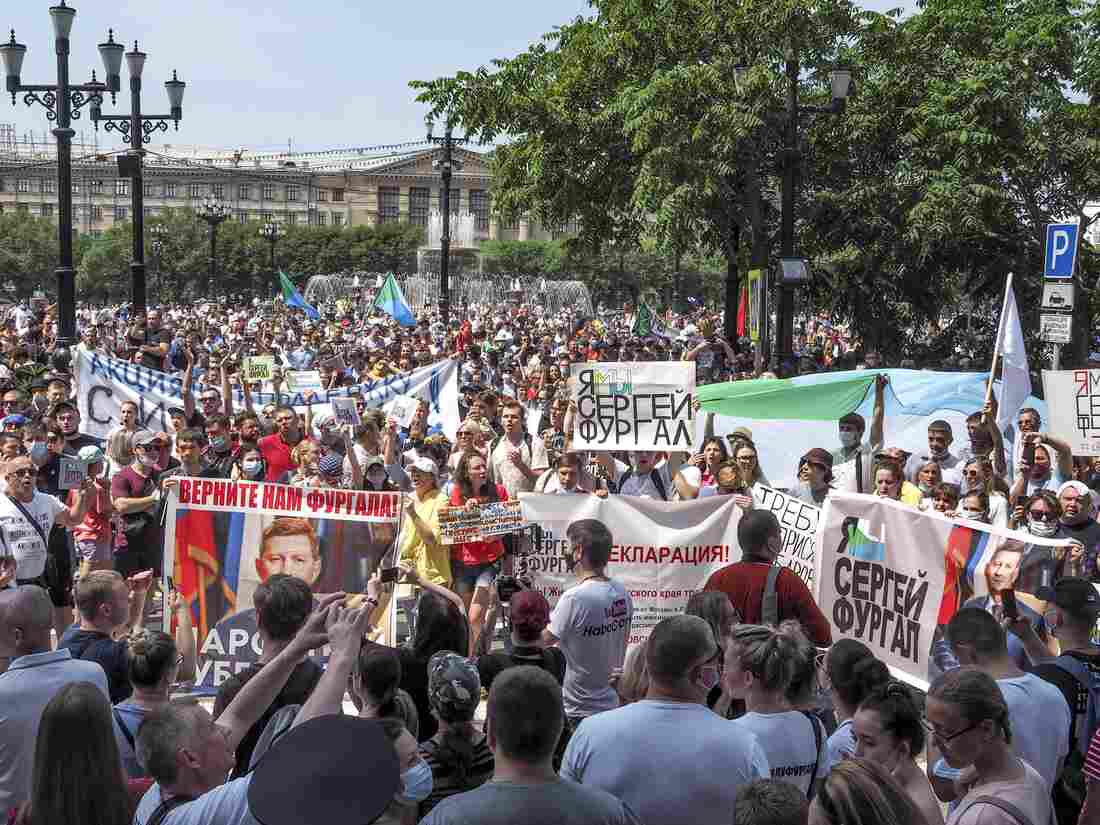 People in the city of Khabarovsk hold posters with messages demanding freedom for Sergei Furgal, the former governor of Russia's Khabarovsk region, on July 18. Protesters have taken to the streets over Furgal's arrest this month on murder charges, which he denies. Igor Volkov/AP hide caption 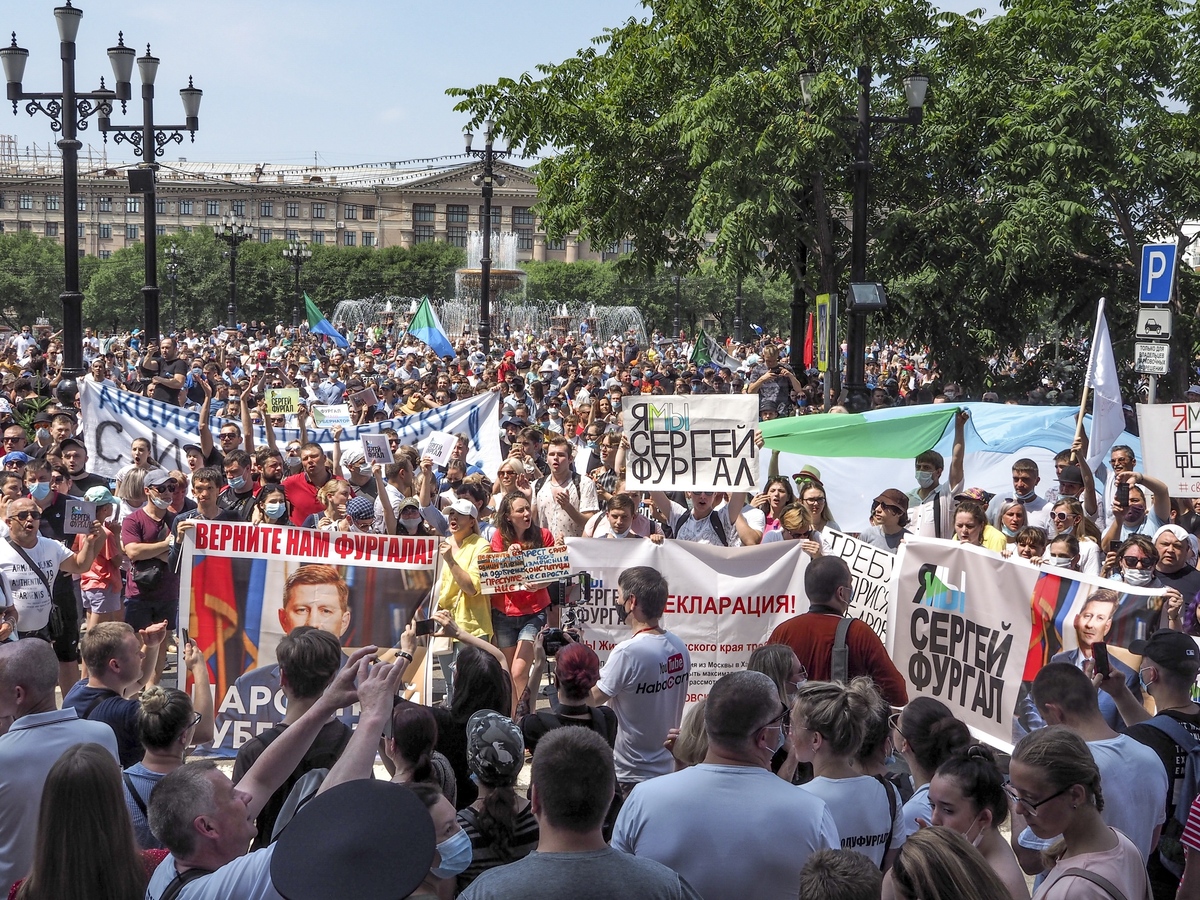 People in the city of Khabarovsk hold posters with messages demanding freedom for Sergei Furgal, the former governor of Russia's Khabarovsk region, on July 18. Protesters have taken to the streets over Furgal's arrest this month on murder charges, which he denies.

Artyom Mozgov, 20, is among the thousands of people who have been protesting for two weeks in the Russian city of Khabarovsk, seven time zones east of Moscow on the Chinese border.

"People go out every day without any kind of organization," Mozgov, a political activist, told NPR. "I'm really happy that people from my region have finally taken responsibility for their lives, understand what's happening in our country and go out and protest."

Since July 11, he and other residents have been demanding the release of the former regional governor, Sergei Furgal, who was arrested two days earlier by masked federal agents on charges of organizing contract killings 15 years ago. Furgal, now in pretrial detention in a Moscow prison, maintains his innocence, and locals are demanding he be released and face the charges in his hometown.

The size and durability of the demonstrations are unprecedented for Khabarovsk, a provincial capital with a population of 600,000. For President Vladimir Putin, whose aversion to street protests is well known, they pose an additional challenge as Russia battles the coronavirus pandemic and the economic downturn it caused. 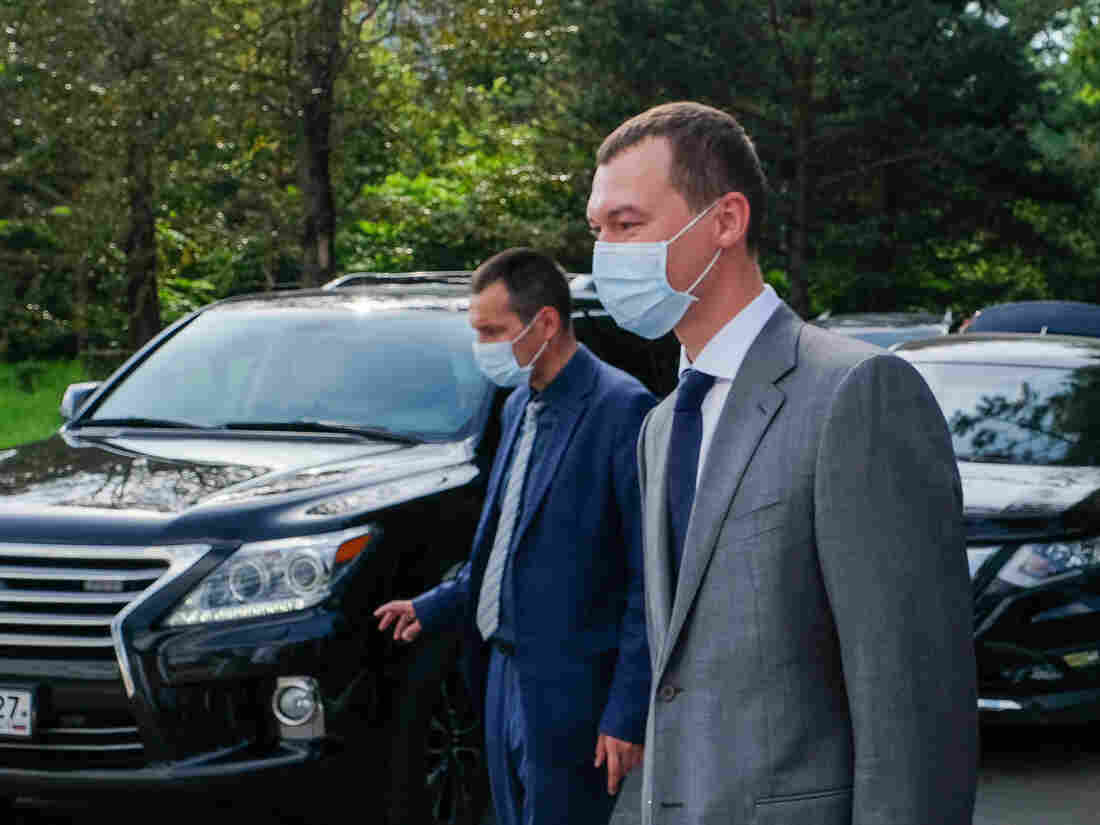 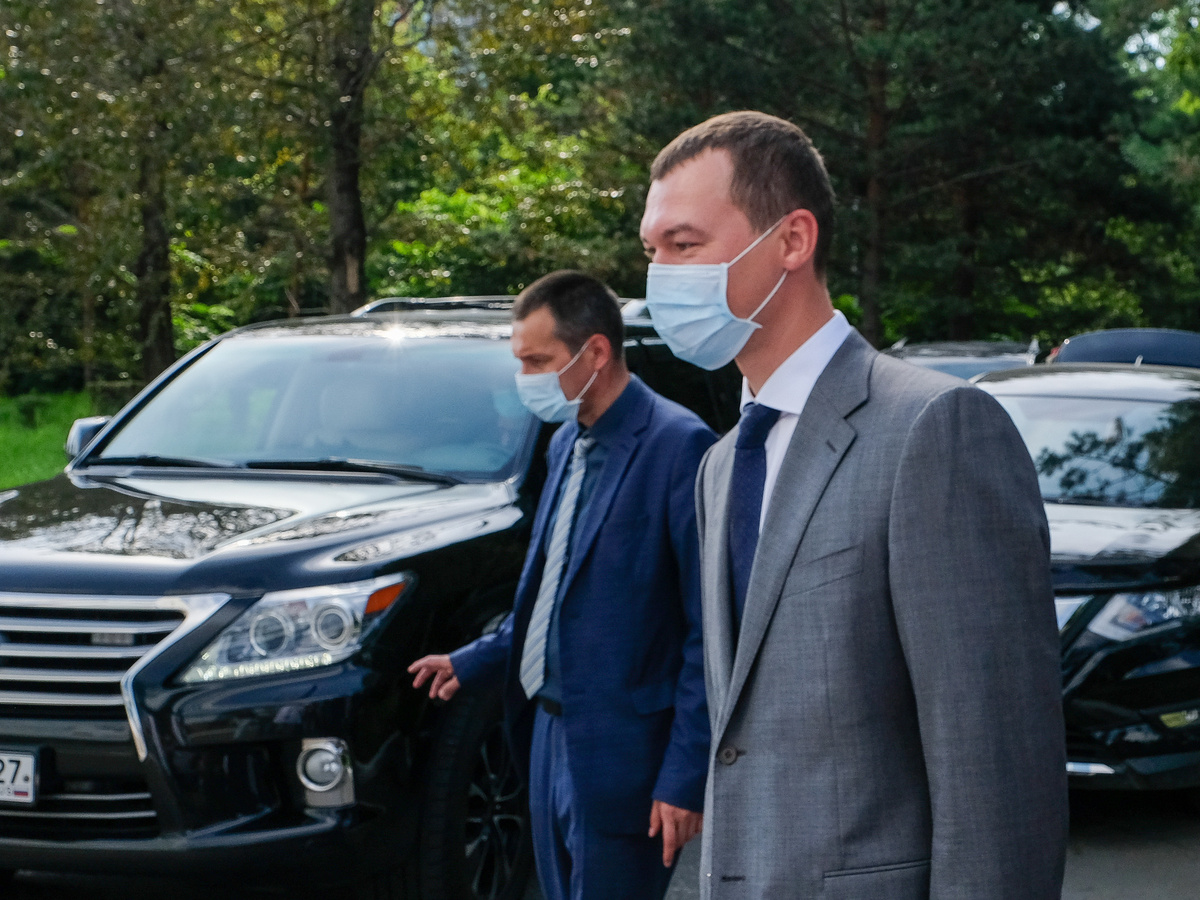 The acting governor of the Khabarovsk region, Mikhail Degtyaryov (right), visits a local hospital on Thursday. Russian President Vladimir Putin appointed him earlier this month. On his first night on the job, protesters chanted, "Degtyaryov, go away!"

On Monday, Putin officially fired Furgal and appointed Mikhail Degtyaryov, a little-known national legislator from the city of Samara, as acting governor.

"I wish you good luck, I'll see you later," Putin told Degtyaryov in a videoconference before the new governor got on a plane to make the almost eight-hour flight from Moscow to Khabarovsk.

On his first night in town, protesters chanted, "Degtyaryov, go away!" He responded defiantly, streaming his walk to work the next morning on Instagram.

"I won't leave because there's a lot of work to do," he said. "The region has been without a leader for 10 days, and there's a stack of papers on my desk a meter high."

The new governor's main task will be to quell the protests rocking the region. 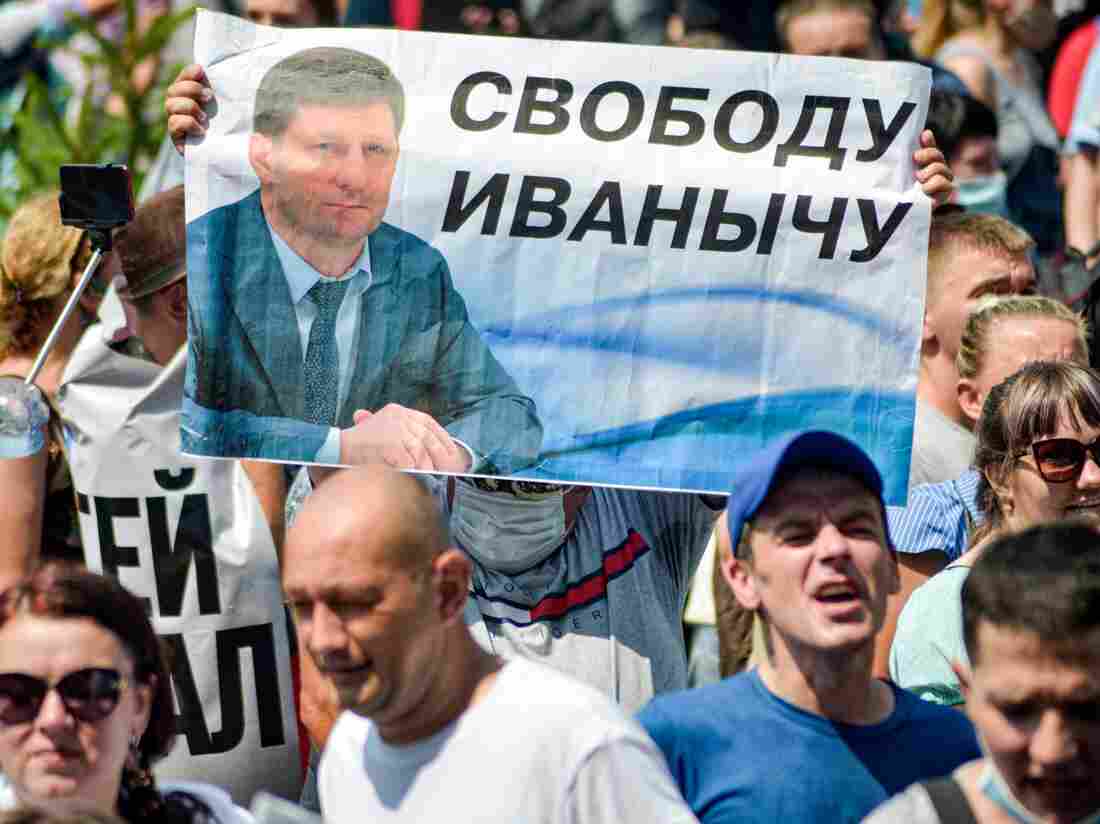 People carry a banner demanding freedom for Furgal during a demonstration in Khabarovsk on July 18. Aleksandr Yanyshev/AFP via Getty Images hide caption 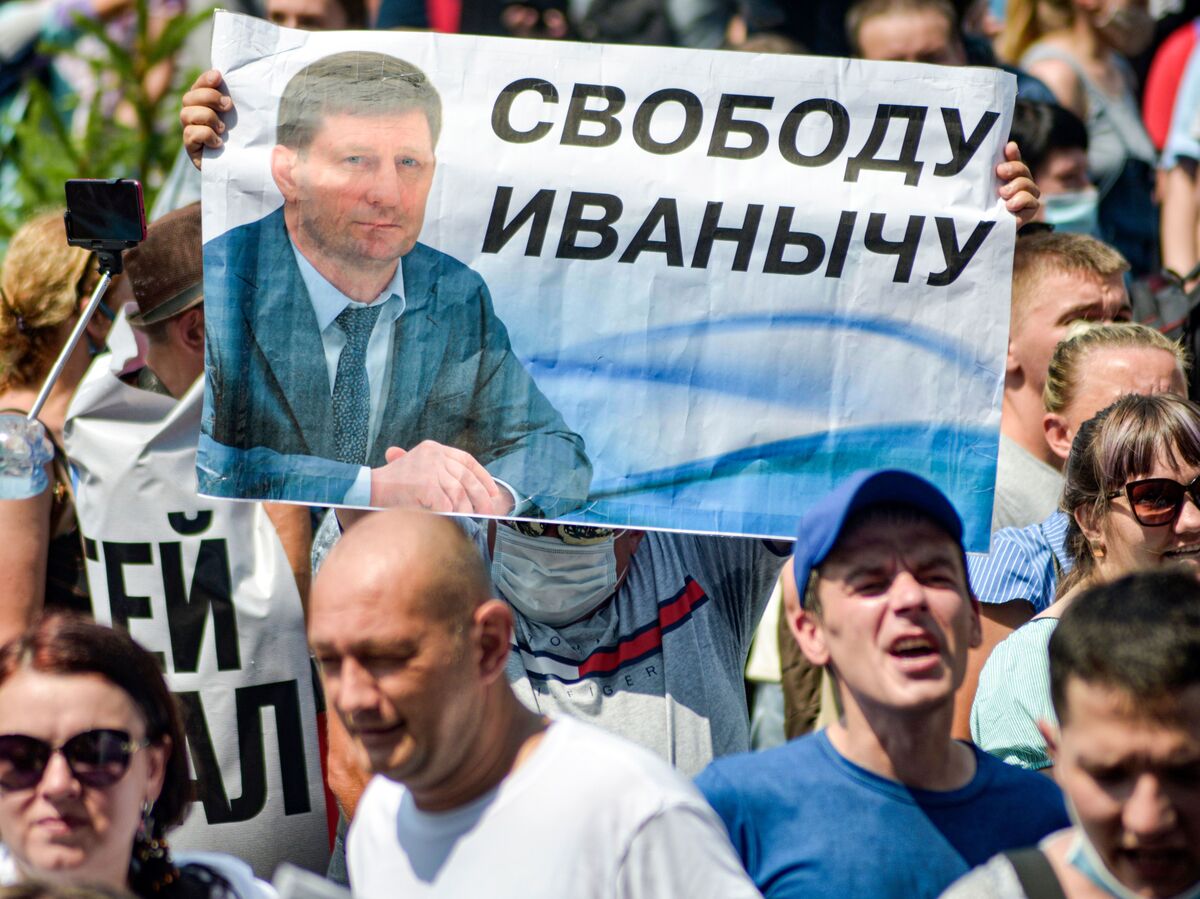 People carry a banner demanding freedom for Furgal during a demonstration in Khabarovsk on July 18.

"I'm afraid Degtyaryov is not up to the job," said Nikolai Petrov, an expert on Russia's regions at the Chatham House think tank in London. "For one, he came from far away, and secondly, he doesn't have any real leadership experience."

Degtyaryov is from the same political party as the deposed governor, but Putin is mistaken in assuming that will help his appointee defuse the Khabarovsk protests, Petrov said.

Both Degtyaryov and Furgal are members of the Liberal Democratic Party of Russia, which belongs to the so-called systemic opposition — a handful of parties the Kremlin uses as sparring partners for the ruling United Russia party. Nationalist firebrand Vladimir Zhirinovsky, who has spoken out in Furgal's defense, has led the party since the collapse of the Soviet Union nearly three decades ago.

Degtyaryov's party affiliation is irrelevant to most protesters in Khabarovsk, who view him as someone imposed from Moscow, Petrov said. Furgal, on the other hand, is a popular local figure who trounced the Kremlin-backed incumbent governor in a landslide election two years ago.

In many regions of Russia, the Liberal Democratic Party of Russia — much like the Communist Party — has drawn voters not thanks to any particular ideology but as a safe way to voice protest. Last year, the party took an absolute majority of the Khabarovsk regional assembly, with United Russia hanging onto just two seats. United Russia was swept out of Khabarovsk's City Council, with the Liberal Democratic Party of Russia taking 34 of 35 seats.

"Putin personally — and Putin's stooges who run the Far East — hate Khabarovsk region and its inhabitants because time and again, they lose elections there," opposition leader Alexei Navalny said in a video posted Thursday that was widely shared on social media.

The last straw for the Kremlin was a recent vote on constitutional amendments allowing Putin to stay in power until 2036, because Furgal didn't deliver the expected results, Navalny said. Turnout in the Khabarovsk region was 44%, among the lowest in the country, with 62% voting in favor of the amendments. Nationwide, turnout was 68%, with 78% for the changes.

Now the Kremlin is intent on restoring the primacy of United Russia and deterring other provinces from going the way of Khabarovsk, Navalny said.

The Kremlin's approach is not without risk, Petrov warned.

"The people in Khabarovsk are showing that it's possible to protest and that the Kremlin can't do anything to them if there are 30,000 or 40,000 of them," he said. "The longer the protests continue, the more negative a role they play for the Kremlin."

The Khabarovsk protest may inspire other regions to vote against Kremlin-backed candidates in September elections. People living in the far-flung reaches of Siberia and Russia's Far East are less susceptible to pressure from the Kremlin, Petrov said.

The Kremlin now confronts the dilemma of using force or making concessions that will be closely watched by other regions, he said. A wave of protests in Moscow last summer was followed by arrests and criminal cases against participants.

Two opposition activists in Khabarovsk, Dmitry Nizovtsev and Sergei Naumov, said they were attacked and beaten by unidentified assailants in two separate incidents since Thursday.

Mozgov said police have summoned him to appear next week on suspicion of violating a law on public rallies.

The protests have become more radical, first opposing meddling by Moscow, then voicing support for the arrested former governor and now calling for Putin's resignation, he said.

On Saturday, demonstrations in Khabarovsk will enter their third week.

"I think even more people will come out than on the past two weekends," Mozgov said. "We, the residents of Khabarovsk, hope our acting governor, Degtyaryov, will come out to talk with us. Everything depends on that."

Putin's governor, though, has already said he has better things to do than meet with "those who shout below my window." Degtyaryov announced on Instagram that he will be traveling this weekend to a remote, unspecified part of the Khabarovsk region.