Accessibility links
Composer Maria Schneider Returns, With A Reckoning, On 'Data Lords' After collaborating with David Bowie in 2014, the multiple Grammy-winning composer found her artistic process had been recombobulated a bit — much like our ever-more digital world.

Composer Maria Schneider Returns, With A Reckoning, On 'Data Lords'

Composer Maria Schneider Returns, With A Reckoning, On 'Data Lords' 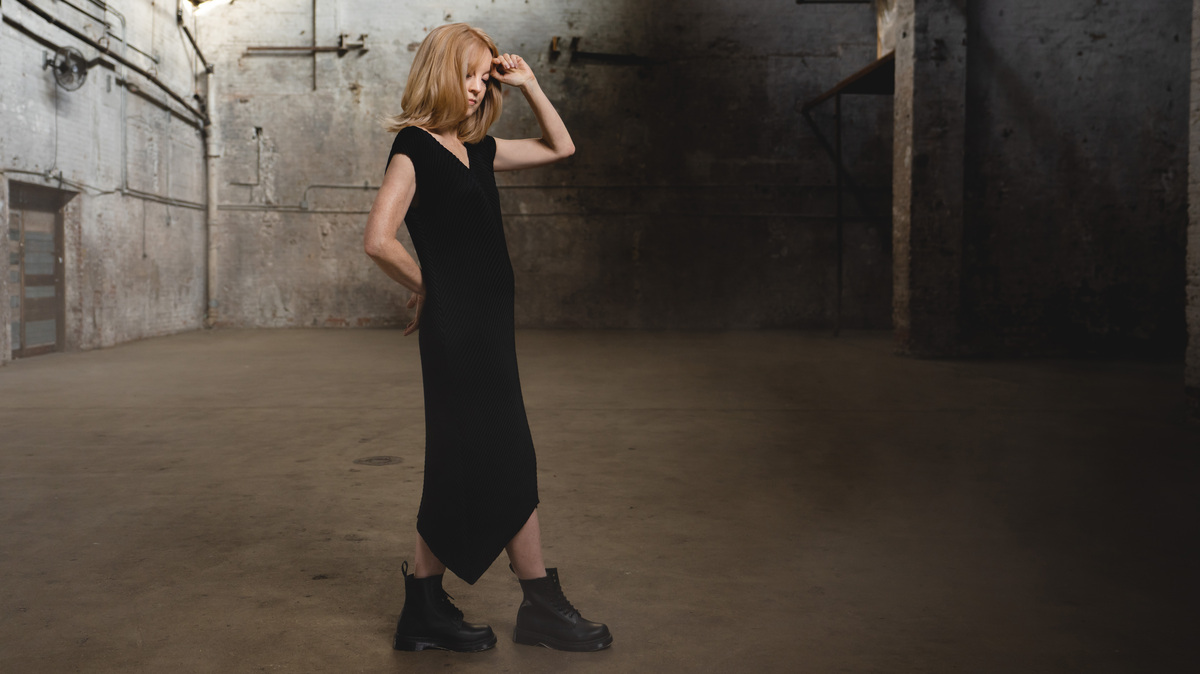 Briene Lermitte/Courtesy of the artist

Six years ago, Maria Schneider, the meticulous jazz composer and orchestrator, embarked on a project with David Bowie, the polymorphic pop vanguardist. This odd-couple alliance yielded one transcendent single: "Sue (Or in a Season of Crime)," a brooding but locomotive tune that later resurfaced, in a gnarlier arrangement, on Bowie's final album, Blackstar.

If the collaboration was fleeting, it also proved fateful. Schneider was in the middle of mixing her album The Thompson Fields when she first heard the final mix of "Sue." And she quickly discovered that pivoting from Bowie's neo-noir shadow realm to her own more pastoral, pellucid sound induced a kind of whiplash. "I actually laughed out loud because it was such a shock to come back to my world," she confessed to him in an email. "I felt like someone twisted my head so far to the right, it snapped off. What have you done to me?!"

Bowie's reply was short and sweet: "my work here is done!!"

In truth, Schneider had been wheeling along two separate, seemingly unrelated tracks — art and commerce, in a sense — before that jolt of disconnect. Her namesake orchestra, legendary for its deep, cohesive intuition, had also grown synonymous with open sky and kinetic flow — sensory impressions that she associated with nature, and managed to convey in her compositions. At the same time, Schneider was becoming one of the music world's most prominent critics of copyright abuse and unfair revenue structures in the streaming age: testifying before Congress, appearing on cable news, delivering keynote speeches that sounded a canary-in-the-coalmine alarm. (This month, it was announced that she had filed a class-action lawsuit against YouTube.)

This collaboration between Maria Schneider and David Bowie in 2014 had a lasting influence on how Schneider approaches her work — conceptually and literally.

The Thompson Fields won Schneider a Grammy in 2015. So, for that matter, did "Sue (Or in a Season of Crime)." And what may have looked at the time like two different branches of her artistic identity slowly, intriguingly began to entwine. She used a Library of Congress commission to create an uncharacteristically brackish and turbulent piece called "Data Lords," after her term for corporations like Google and Spotify, and the distorted ecology they've helped create. "It's seducing us, mesmerizing us into the beauty of just having everything [available]," she said onstage before the piece's world premiere in 2016, "while these big data companies are gathering data, information about us — this huge amount of intelligence that is making a small few incredibly rich and incredibly powerful."

Schneider shared similarly barbed remarks at the 2017 Newport Jazz Festival, where she unveiled another triumphant commission, "Don't Be Evil" — her acidic riff on Google's unofficial motto (which the company later quietly scrubbed). By then, it was clear that Schneider had a larger opus taking shape, the contours of which were yet unknown. 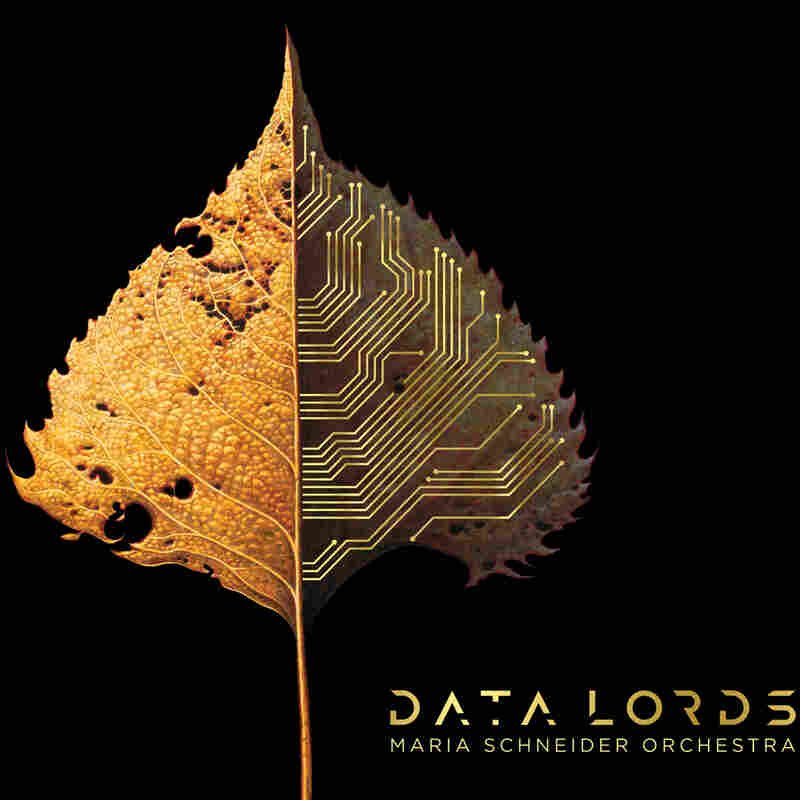 Now it's finally here, in the form of a magnificent double album, Data Lords. Available through ArtistShare — strictly as a 2-CD set or high-res download — it parses into thematic halves, "The Digital World" and, as an antidote, "The Natural World." On the whole and in the details, it amounts to the most daring work of Schneider's career, which sets the bar imposingly high. This is music of extravagant mastery, and it comes imbued with a spirit of risk, which hasn't often been high on the long list of praiseworthy traits in Schneider's work.

As it turns out, Bowie's work wasn't done. After his death in early 2016 — which came on the heels of Blackstar, an album defined by the exertions of jazz musicians like longtime Maria Schneider Orchestra members Donny McCaslin and Ben Monder — Schneider held on to a shard of his advice. During the development of "Sue," she'd been fretting over how to make the piece work, and whether it could. At one point, sensing her panic, Bowie laughed. "The great thing about music," he said, "is if the plane goes down, we all walk away."

Recalling that quip earlier this week, Schneider seemed to draw sustaining life from it, as if it were a mantra. She needed no prompting to connect its message to the wildly expressive canvas of Data Lords. "I've never had more fun writing music," she said. "I threw caution to the wind on this album, and it felt really good." 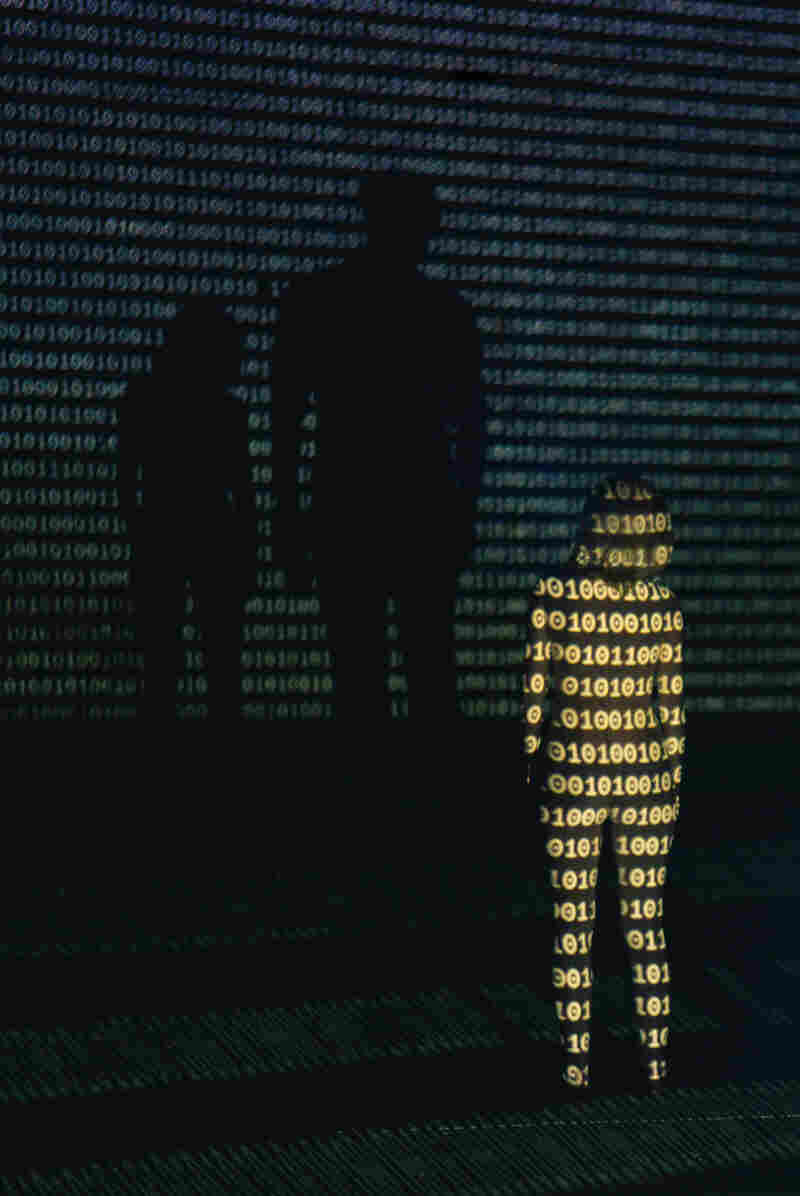 Briene Lermitte/Courtesy of the artist

Maria Schneider grew up in southwest Minnesota, surrounded by rural prairie. And over the last decade, especially — a span that brought not only The Thompson Fields but also Winter Morning Walks, a song cycle for soprano Dawn Upshaw that garnered three Grammys in the classical field — her music has hummed with an unmistakable terroir. Its sound conjures the vast American topography of Schneider's youth, along with the rustling quiet and rich interiority she remembers from that time.

Data Lords opens with a nod in that direction: a somber, slow-rolling elegy titled "A World Lost," which starts out as a showcase for Ben Monder's electric guitar. Schneider, speaking this week from the Catskills, said the piece's apocalyptic undertone was intentional. "But what I really related it to is: The end of the world inside of us," she added. "The way we used to be. The way that I used to feel when I had such an expanse of space inside of me." In that sense it's a fitting overture for "The Digital World," setting up unseen but serious psychic consequences in our age of heavy bandwidth and pinging distraction.

The ominous mood of "A World Lost" also suggests an echo of late-period Bowie — and not just because Monder employed a similar chorus effect in his guitar solo on "I Can't Give Everything Away," the final track on Blackstar. Schneider hadn't meant it as a tribute, but she said there's reason to draw a parallel. While working with Bowie, she hit upon a method of workshopping material with just her rhythm section and a soloist or two, rather than the full 18 members of the orchestra. It was such a useful process that she revisited it for a few pieces on the new album, including "A World Lost."

"I'm putting my music out there that in some ways is very tightly composed, but in other ways is [about] the improvisation," Schneider explained. "And I want those worlds to meet on equal footing; I want their improvisation to be an important part of the development. But I have to create what sends them off, and the arrival point that has to feel inevitable — with an unknown leading to it." She found that gathering subsets of musicians to play through her material, like a test trial, yielded insights that she could build on.

There's also a rare simpatico between the members of the band — some of whom, like saxophonist Rich Perry and pianist Frank Kimbrough, have been steadfast over nearly the last 30 years — and their composer-conductor. Short of the Duke Ellington Orchestra, which famously lived on the road, or the Jazz at Lincoln Center Orchestra, which has the backing of a major organization, few big bands have ever been able to establish this nearly metabolic sensitivity as a collective. "Everybody understands the importance of the compositional continuity," Schneider says. "They know me, they know each other, and they're able to take risks and feel really safe."

Throughout Data Lords, there are moments where one musician seems to take over, like a pilot at the controls. It happens on "Stone Song," as Steve Wilson improvises a peekaboo through-line on soprano saxophone; it happens with a few different soloists on "Don't Be Evil." A piece titled "Sputnik" amounts to an orbital concerto for Scott Robinson's baritone saxophone, gradually spinning through all 12 keys. Schneider can create set pieces like these because she knows the capacities of her players — and understands how to mobilize the rest of the orchestra as a shifting atmosphere or enveloping texture. A solo is never just a solo. 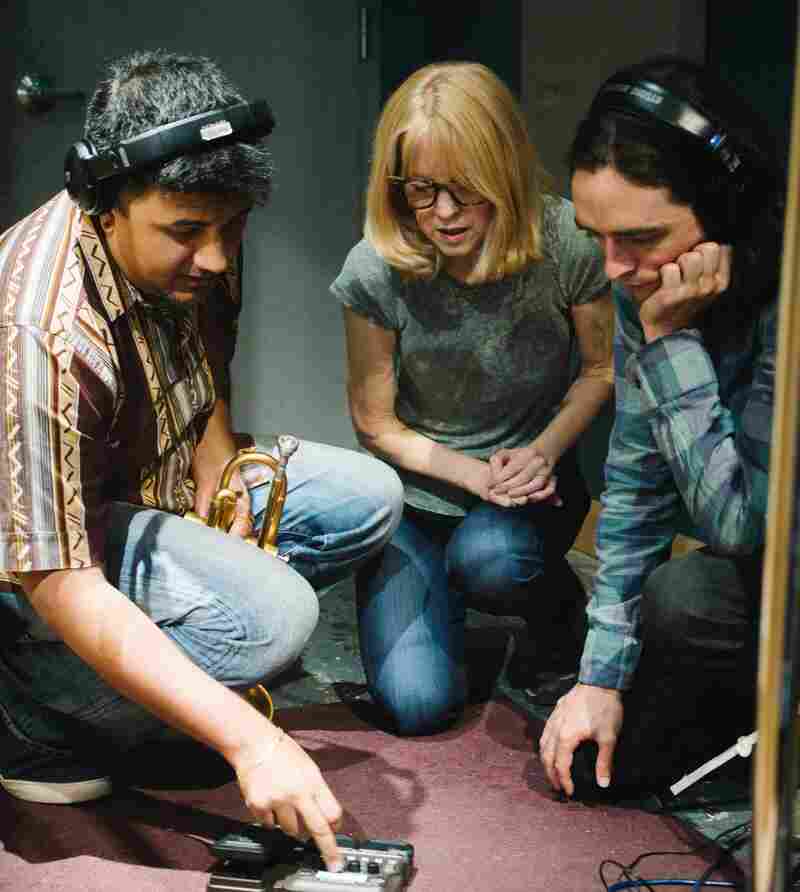 From left: Mike Rodriguez, Maria Schneider and Michael Lenssen in the studio during the making of Data Lords. Briene Lermitte/Courtesy of the artist hide caption

In some other respects, Schneider pushed herself into new territory as a composer. The title track of Data Lords features a stuttering part for the horn section that isn't notated, which she now likens to a witch's cackle. "CQ CQ Is Anybody There," meanwhile, uses Morse code as a rhythmic basis for almost all of its written parts — at once a fond remembrance of Schneider's father, a ham-radio enthusiast, and a way to reconsider what she calls "a search for connectivity in a mysterious world." (Among the words rhythmically encoded into the piece are "data," "power" and "greed.") Along with a McCaslin tenor saxophone solo in free tempo, it includes a Greg Gisbert trumpet solo processed with digital effects.

During an engagement at Jazz Standard last December, Schneider previewed this and other pieces from Data Lords, and the overall impression was that of a band pushing hard toward the unknown. But it was also the sound of a collective that fully knows itself.

"Sometimes for me, the whole process of music feels more like a Ouija board than it does a conscious thing," Schneider reflects. The work can be barbed in its intentions, but without genuine inspiration it ends up feeling didactic — a fate she was determined to avoid. The inclusion of "The Natural World" seems partly designed with that counterweight in mind. Clearly, it's also a hopeful gesture, a way to signal that "A World Lost" isn't lost just yet.

"I think one of the really mystical things about music is how you can go into that place inside of yourself, when you're writing or making something — that space that I was talking about that I fear we're losing," Schneider says. "And I believe that when you make that encounter — with the most concentration, and the best craftsmanship, and everything else that you put together in your life to try to bring that into form as clearly as you can — then it captures something ineffable but that people feel. And it's very real."