Accessibility links
Trump's Favorite Coronavirus Metric, The Case Fatality, Is Unreliable President Trump often cites the coronavirus case fatality rate, saying it is more important than the number of cases or deaths. But medical experts say it's not a good way to measure the pandemic. 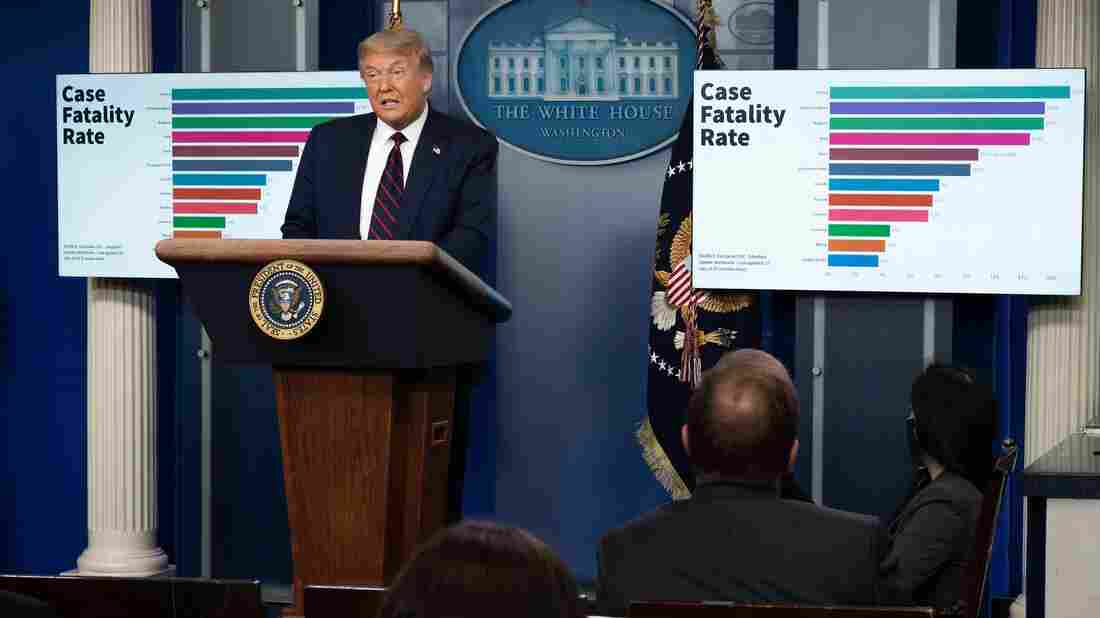 President Trump speaks during a briefing Tuesday at the White House with a chart showing case fatality rate behind him. Jim Watson/AFP via Getty Images hide caption 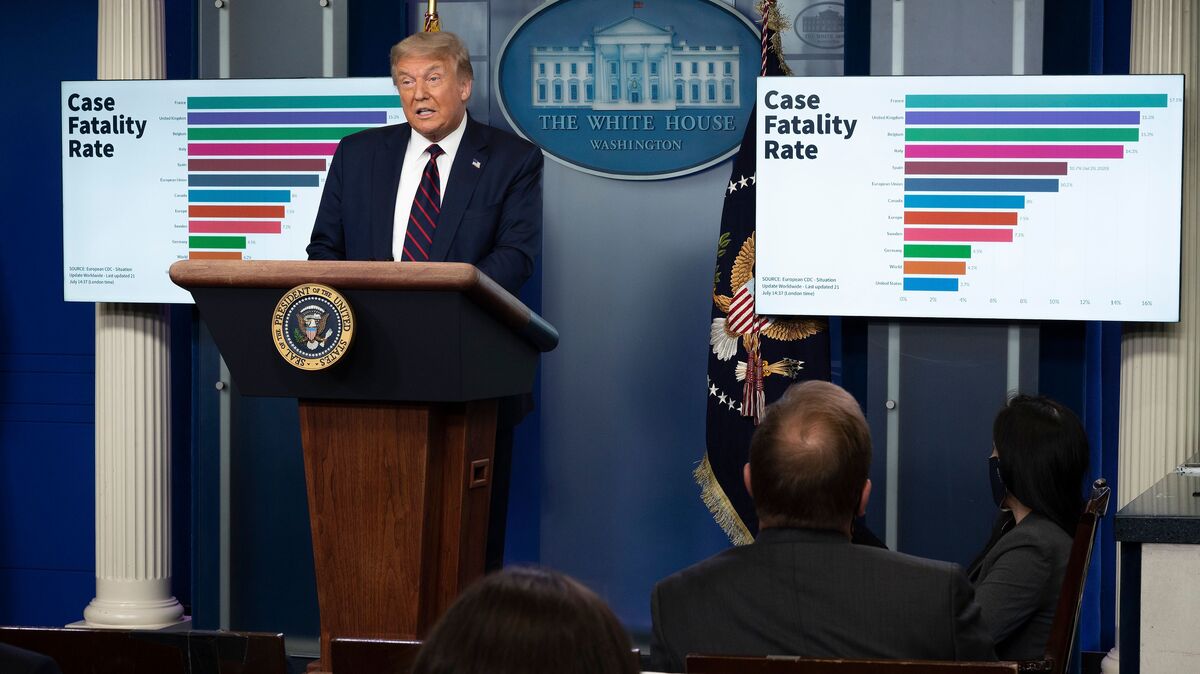 President Trump speaks during a briefing Tuesday at the White House with a chart showing case fatality rate behind him.

As the number of coronavirus cases started spiking again this month, the White House keyed in on a different number — one that paints a more rosy picture of the pandemic: the case fatality rate.

When asked about rising cases at a recent briefing, press secretary Kayleigh McEnany quickly parried. "We're seeing the fatality rate in this country come down," said McEnany. "That is a very good thing."

The case fatality rate is the result of a simple mathematical calculation: the number of deaths divided by the number of diagnosed coronavirus cases. But it's also a moving target. Case numbers are rising fast; deaths are a lagging indicator, running several weeks behind.

"Measuring ... mortality rates on any given day is not a reliable way of communicating about this pandemic," said Dr. Tom Inglesby, director of the Johns Hopkins Center for Health Security.

It is possible that innovations in treatment methods and therapeutic drugs have helped improve the survivability of COVID-19. It is also possible that with more young people being infected in this latest round, they are less likely to die. But medical experts warn it is also just too soon to be sure. And, they say, it's an unreliable and misleading metric.

But that hasn't stopped President Trump from boasting about the figure.

"Our case fatality rate has continued to decline and is lower than the European Union and almost everywhere else in the world," Trump said Tuesday at his first White House coronavirus briefing in nearly three months.

In his interview on Fox News Sunday with Chris Wallace, Trump asked his staff to bring him the "death chart." He said "the death chart is much more important" as Wallace ticked through 75,000 daily cases and 1,000 daily deaths.

Trump had that chart displayed behind him during the briefing. But this isn't a metric public health experts have been using.

Inglesby says that by a more direct measure (the sheer number of deaths), and even adjusted for population size, the U.S. is not doing well compared to other countries around the world.

"What national leaders have the obligation to tell people is just the direct truth," Inglesby said. "If we give them a false sense that things are getting better when they're not, then they're going to make decisions that increase the risk of transmission. And they're also going to stop having confidence in the information they're being given."

Focusing on the fatality rate also glosses over other serious problems with the coronavirus, says Dr. David Relman, who specializes in immunology and infectious diseases at Stanford. He says about 20% of people get really sick with potential long-term health consequences. Plus, he says, the coronavirus is stressing the medical system. And as long as it is uncontained, the virus is holding the economy back. So, as he sees it, talking about the case fatality rate is counterproductive.

"What you do instead when you pull out one little piece and dangle it in front of people is to confuse and distract and undermine the overall message," said Relman.

He says people need to take this virus seriously and take precautions, and that is a sacrifice that requires leaders to get the public on board. For Trump, accentuating the positive might have short-term political benefits, but there are longer-term risks.

"I think it was a mistake early on to be dismissive of the seriousness of it and that it was just going to go away," said Mike DuHaime, a Republican strategist.

DuHaime gives Trump credit for coming out this week and treating the coronavirus more seriously than he has in the past, telling people to wear masks and avoid crowds. But he readily acknowledges that Trump has gone through other brief spurts urging the public to sacrifice to slow the spread of the virus, only to reverse himself, downplay the severity and pressure states to reopen.

"In order for him to succeed here politically, his credibility has to be as strong as possible," said DuHaime, who now works at the firm Mercury.

Trump's credibility has taken a major hit through this crisis. According to the latest Pew Poll, only 30% of Americans trust Trump to get the facts right on the virus. And Trump's approval rating has tanked too, something he is attempting to repair with the resumed daily briefings.

"At the end of the day, he just needs to do a good job. I know that sounds simplistic, but when you're an incumbent running for reelection, doing a good job is really the most important thing," said DuHaime. "And to this point people haven't seen him do a good job on what they think is the greatest challenge of his presidency."

DuHaime points out that people are checking the numbers every day — the number of new cases in their city and state, the number of hospitalizations and deaths. Those numbers are all readily available and easier to find than the case fatality rate.

A previous version of the story incorrectly defined the case fatality rate as the number of cases divided by deaths. In fact, it is calculated by dividing the number of deaths by the number of diagnosed cases.