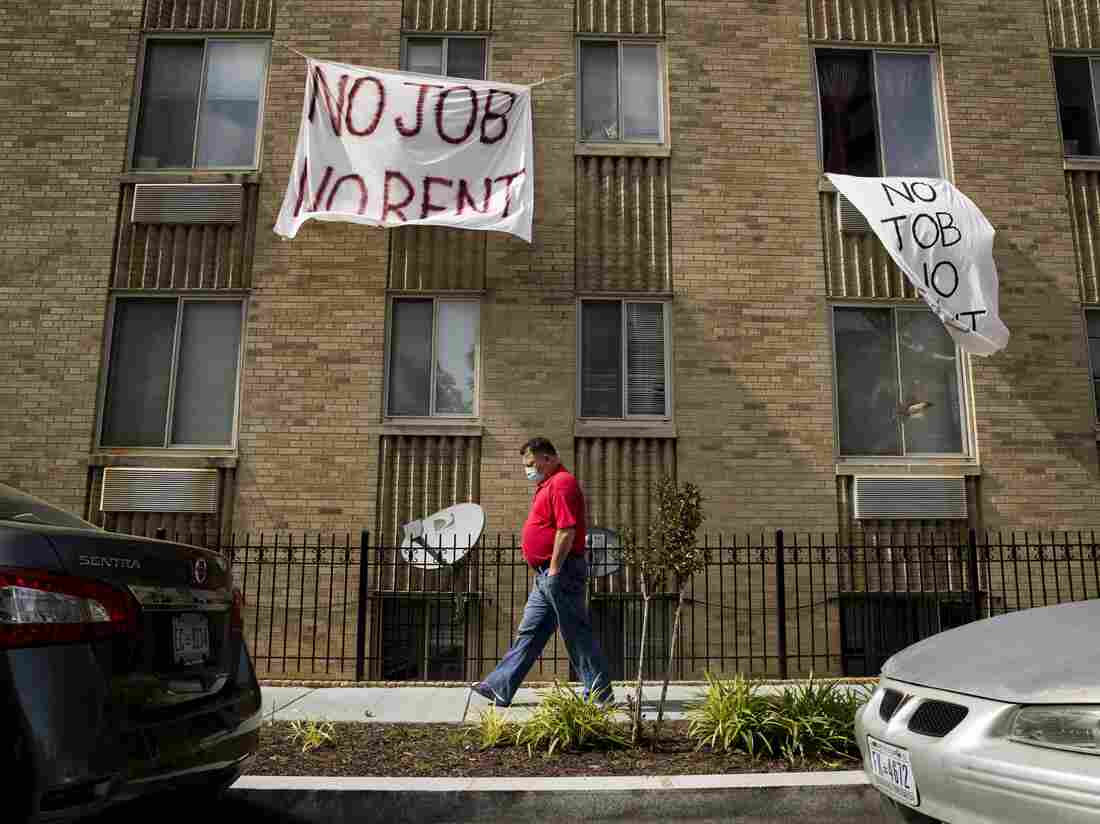 Signs hang from the windows of a Washington, D.C., apartment in May. Housing advocates and landlords say millions of out-of-work Americans won't be able to pay their rent if Congress doesn't extend or replace federal unemployment payments. Andrew Harnik/AP hide caption 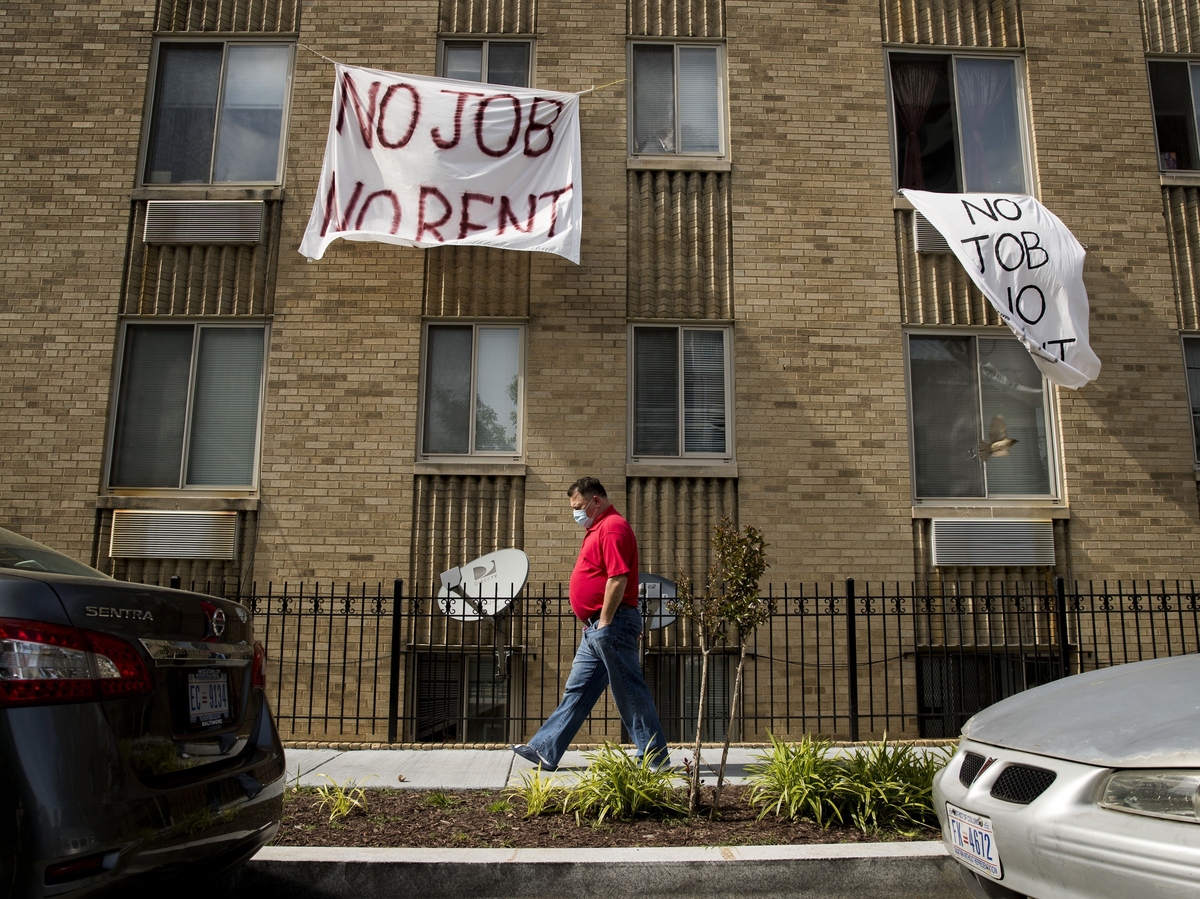 Signs hang from the windows of a Washington, D.C., apartment in May. Housing advocates and landlords say millions of out-of-work Americans won't be able to pay their rent if Congress doesn't extend or replace federal unemployment payments.

Merry Collins lost her job as a home health aide in Dallas after the coronavirus outbreak hit. Before she started getting $600 a week in extra federal unemployment benefits, she got behind on the rent. And in June her landlord took her to court to evict her.

"The first day the courts opened here in Dallas," she says, "that's when they filed for eviction."

Collins sounds winded. She has trouble breathing because she's been struggling to recover from COVID-19. She tested positive for the coronavirus. She's a single mom caring for a disabled teenage son who also became sick with the virus. 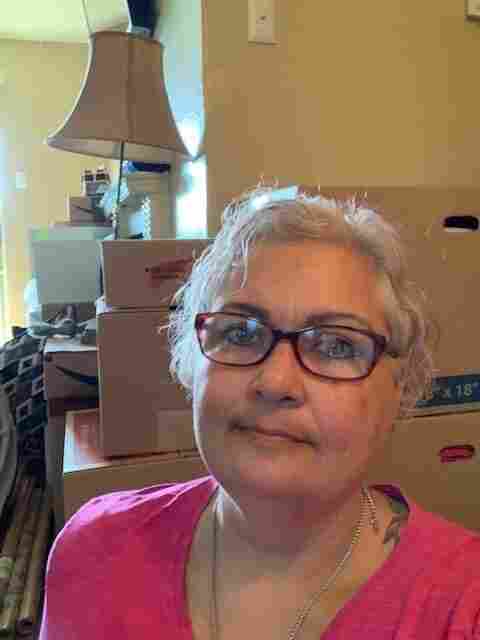 Merry Collins has been fighting COVID-19 and the threat of eviction at the same time. She's been boxing up her belongings in her Dallas apartment and worries she could be evicted soon. "I'm scared," she says. Merry Collins hide caption 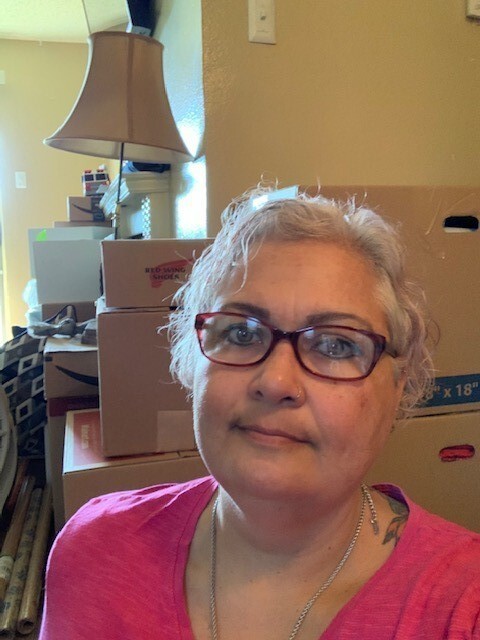 Merry Collins has been fighting COVID-19 and the threat of eviction at the same time. She's been boxing up her belongings in her Dallas apartment and worries she could be evicted soon. "I'm scared," she says.

But she says her landlord has kept trying to evict her, even though she has told the owner about her health problems and that she's now getting the unemployment benefits and could work out a plan to catch up on the rent.

But now that the benefits are ending, Collins doesn't know what to do.

Upward of 25 million Americans who've lost their jobs have been getting those extra unemployment benefits. That $600 per week has helped many to afford to pay their rent and other bills. But that federal money stops this weekend.

"It's very clear that without a sustained federal intervention, there will be a wave of evictions and a spike in homelessness across the country," she says.

The wave has already begun, Yentel says. "Congress needs to act to prevent it from becoming a tsunami," she says, urging lawmakers to extend the expanded unemployment benefits. "We are running out of time."

Courts are receiving thousands of eviction filings, even where the coronavirus is raging right now, in states such as Texas.

Even as she copes with COVID-19, Collins is preparing to move out in case she is evicted.

"Most of my house is like 80% packed," she says. "In the middle of me being sick, I'd get up and pack a box and then collapse." She says just packing one box would wear her out. But she says, "I have to have everything ready, because if they show up and say, you got to go now, I have to be ready."

If that extra $600 a week was going to keep coming, Collins could afford to rent some other apartment. But Congress hasn't worked out a plan to extend or replace the unemployment payments.

Meanwhile, a federal moratorium on evictions that protects an estimated 12 million rental units, some with federally guaranteed loans, is ending Friday as well.

State and local moratoriums have been expiring, too. And housing advocates say that, along with the loss of the extra $600 in unemployment money, is creating a perfect storm for evictions.

Rollout Of Republican Coronavirus Aid Bill Pushed To Next Week

"We have evidence that it's really been the federal stimulus money that has kept renters in their homes," says Priscilla Almodovar, CEO of Enterprise Community Partners, an affordable housing nonprofit.

If Congress fails to act, like with so many other parts of this crisis, she says people of color will be disproportionately hurt. "Especially low-income communities of Black and Latino renters will lose their home" through eviction, she says. "We're very concerned."

A tidal wave of missed rent payments and evictions would hurt landlords. too.

Greg Brown with the National Apartment Association says landlords don't like to see renters losing that extra $600 a week either.

"It's going to be a very difficult environment for owners who will be saying, 'Well, how do I keep paying the bills that I have to pay if my residents aren't able to pay their rent?' " he says. "The cascade is very concerning, makes people very nervous."

Landlord and tenant rights groups are both lobbying Congress for additional help — beyond unemployment money — targeted specifically at renters. Democrats in Congress want to set aside $100 billion for renter assistance in this next pandemic bill.

The landlord and tenants' groups disagree about whether eviction moratoriums should be extended. Landlords say they need to be able to evict people who can't pay or some could go out of business.

For her part, Collins in Dallas is still struggling with COVID-19 and the looming prospect of eviction at the same time. She's so far been staving off eviction with the help of a pro bono lawyer.

Her attorney, Parker Burns, says that in different cities or counties there are different rules affecting the eviction process related to COVID-19. "It has left many tenants in the dark about their rights," he says. "Tenants should contact local attorneys, tenants' association, and check their local government websites if they are facing an eviction."

Still, even with legal help, Collins says she is worried she could be out in the street in just a few weeks.