Accessibility links
Breaking Down The Legacy Of Race In Traditional Music In America The symbols of America's racist past have been under intense scrutiny since the protests against police brutality erupted nationwide. Now, the traditional music community is having its own reckoning. 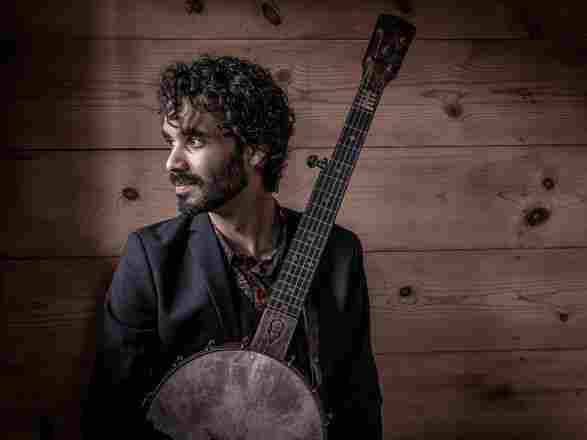 Jake Blount, a 24-year-old banjoist and fiddler, is one of the people in the traditional music community working to educate others on the genre's Black roots. Michelle Lotker/Courtesy of the artist hide caption 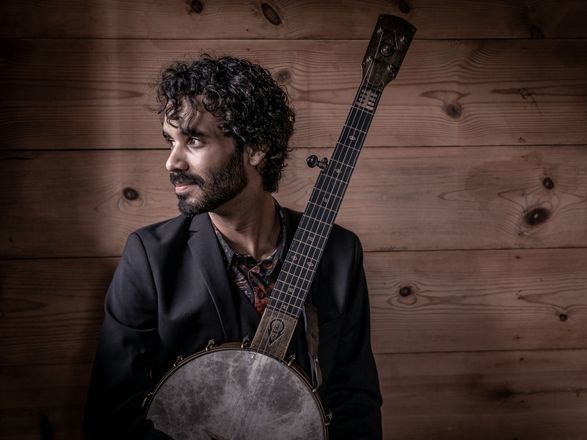 Jake Blount, a 24-year-old banjoist and fiddler, is one of the people in the traditional music community working to educate others on the genre's Black roots.

Michelle Lotker/Courtesy of the artist

The symbols of America's racist past have been under intense scrutiny since the protests against police brutality erupted nationwide. The confederate flag and other monuments from that era have been disappearing from public spaces — both by force and legislation.

But what about the stereotypes and racist imagery in America's musical legacy? The traditional music community is reckoning with some of the songs from its past that are kept alive today through festivals and concerts. For Jake Blount, one musician leading that effort, his love for traditional music started with the banjo.

"The banjo is descended from a number of different African instruments, but when it came to the United States, the first place it found a real home was [among] the slaves in the Chesapeake Bay region, who were my ancestors," he says.

The link between his ancestral past and music just kept unfolding along with the events he saw happening in real time.

"When the Black Lives Matter movement started kicking into full force, particularly right after Trayvon Martin was killed, I remember going upstairs into the attic of my grandparents house in Maine and reading through these books of old spirituals and songs, kind of trying to figure out what my ancestors were thinking and feeling and how they would have coped with this sort of violence," Blount says.

Spirituals like "The Angels Done Bowed Down" became his outlet. Blount is 24 years old and a full-time musician skilled in playing the banjo and the fiddle. On his first full-length album released earlier this year, Spider Tales, he included the same spiritual that comforted him back in 2012.

Traditional music is a broad term for songs that were passed down. The most popular ones like sea shanties and folk songs date back to the 19th century. And festivals have been a way to keep them alive.

But some of the songs made Blount feel uncomfortable, like "Turkey In the Straw." White fiddlers in blackface used to play the tune in minstrel shows, and it's been recorded with racist lyrics.

"I know what it makes me feel when I'm at a fiddle festival and I hear someone play 'Turkey in the Straw,' " Blount says. "When I hear that, I will go up to the person and say, 'You should stop,' but I didn't feel empowered to do that for a very long time."

Other songs contain racial slurs, or demeaning stereotypes. Some musicians have argued to revise these songs; others want to stop singing them altogether, and that has been an emerging debate over the last couple of years, especially at the Youth Traditional Song Weekend that happens at the beginning of each year. It's an event that started seven years ago as a space for younger fans of traditional music. 2020 was Blount's first year, and he was leading three workshops focused on music from the Black community. But he told me that when he was first asked to do this, he was hesitant.

"I've always been leery of being like the tour guide to Black culture," Blount says. "There are two Black people here, I think, and that to me has just always been a difficult thing to think about."

Blount is right. Out of almost 200 attendees, there were only two Black people at the festival and only around five people of color total. But there is a clear commitment to be inclusive. Signs are posted in the dining hall of the festival grounds stating: "Consider modifying lyrics, be aware of sensitive and offensive content." But there are still slip ups.

In one room, people are singing so loudly it can be heard outside. And when someone introduces the beloved sea shanty, "Rolling Down to Old Maui," the room electrifies even more.

But when the song is over, 13-year-old Nadia Tell interjects:

"Yes, it is," Tell says. "And if it's possible, it scans perfectly fine to say 'Hawaiians' instead."

The line she's referencing in the song is: "And now we're anchoured in the bay / With the Kanakas all around." The word falls into a gray area. Kanakas does mean "person" in Hawaiian, but white people have used it in the past to insult and demean Pacific Islanders. And so in this case it's best not to sing that line.

"Many of the people who I sing with, I suspect they haven't really thought about this before," says Amanda Witman of Brattleboro, Vt.

Witman is white, as is the group she leads back home that sings mostly in pubs. She tells me that her experience discussing race has been limited, but that's one reason why she attended the Youth Traditional Song Weekend.

"Racism comes up in songs that have been sung for years and years," she says, "And trying to figure out how to have those conversations is really challenging."

Jake Blount's approach to this debate isn't about revising the songs. Instead, he sees a larger need to expand the canon of traditional music and teach people about how deep the roots of this music are.

"So the topic of this workshop," he tells the group gathered, "is sort of the underlying threads that run through much of the Black folk song from the South and elsewhere that describes pieces of our lives that maybe we were not empowered to share openly in regular discussion." 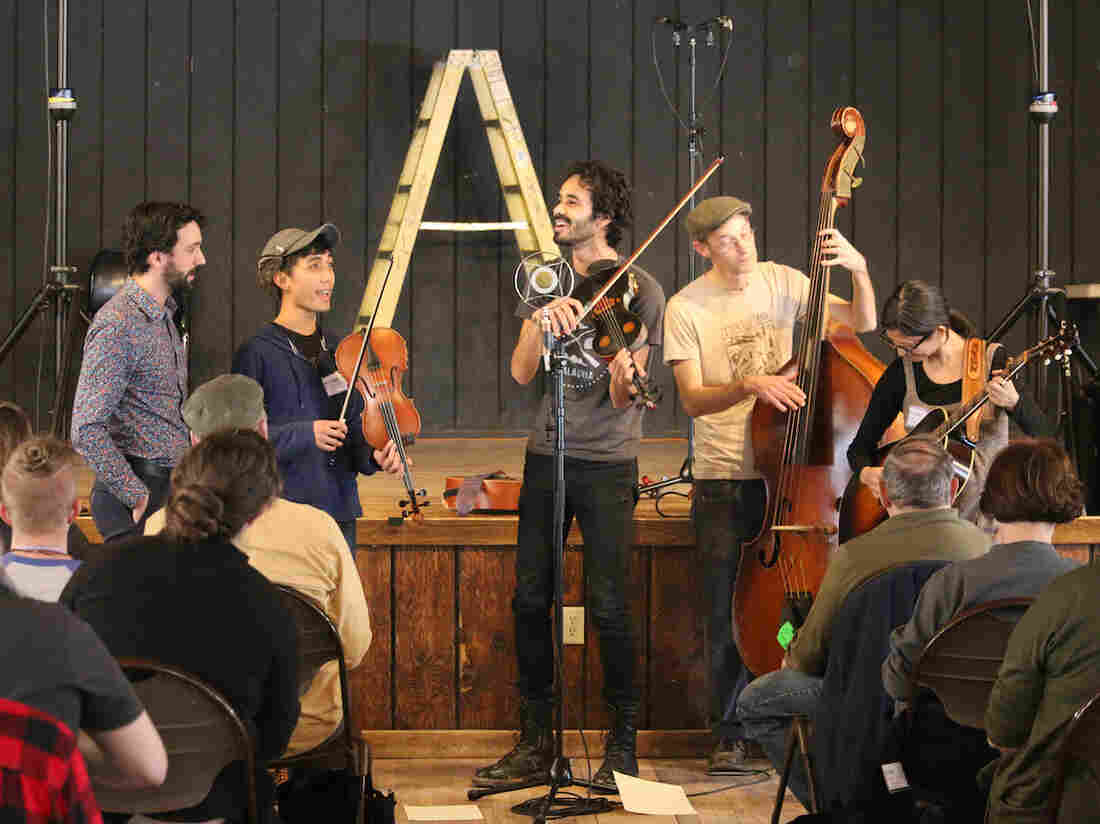 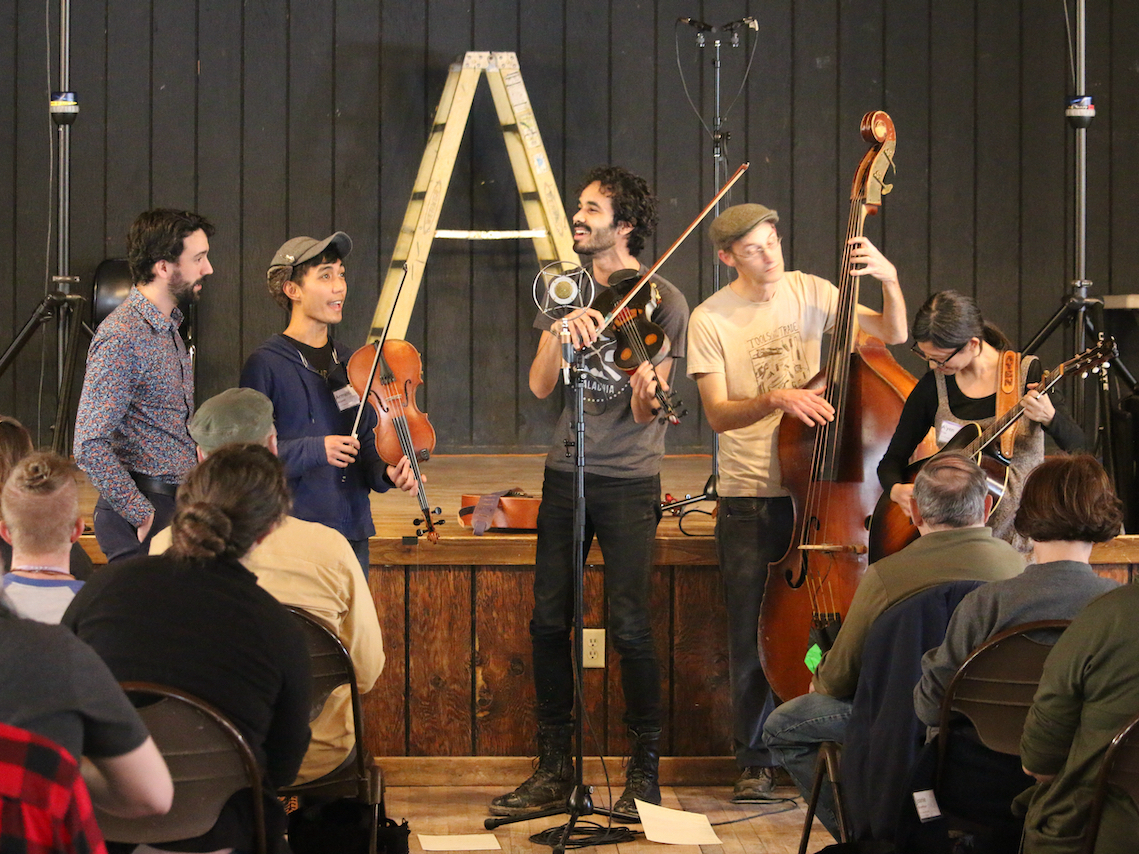 Jake Blount leads a musical performance in his workshop during the Youth Traditional Song Weekend.

Each workshop is full. People are sitting on the ground and filling each corner of the room. Blount is quiet but commanding. He is, after all, teaching songs about some of the most painful parts of Black history to a room of mostly white people.

The first song Blount introduces is called "Dead And Gone." Others call it "Dear and Gone." It's about the grief and loss of slaves and other Black people who were killed and never found.

For each song, Blount explains the context and plays a recorded version then invites the room to learn how to sing it with him. He also leads a conversation on when it's appropriate to sing these songs, and when it's not. And this particular song has a powerful effect on the room:

"It was just silent. You could hear a pin drop and you know, we're loud people here," he says. "I really felt that people understood the intensity of what it was about."

Six months after the festival and with the conversation around race intensifying, Blount says people are starting to give credit to the contributions of the Black community, and that includes traditional music and instruments, like the banjo. But looking back, Blount says he still wouldn't have changed anything about those workshops.

"I think they almost became more relevant in that I was trying to capture these narratives of desperation and anger, the darker sides of the African American musical tradition," he says. "Right now, it's more important than ever that people recognize this didn't come from out of nowhere. This has been something that's been building up over the course of centuries.

"I know that some of the folks who were at those workshops have told me they've been thinking back really hard on those songs ," he continues. "And I think, were I to write up new course descriptions today, I might write up the same ones."

Even though festivals have been put on pause due to the pandemic, Blount says he's hopeful that when they do come back, they'll look a lot and sound a lot different to reflect the contributions of Black Americans on our musical traditions.