Accessibility links
As Justice Department Turns 150, Some Agency Veterans Say Time For Reform Today's Department of Justice is supposed to be separate from the White House and politics, but advocates say it needs new rules and practices to restore a tarnished reputation. 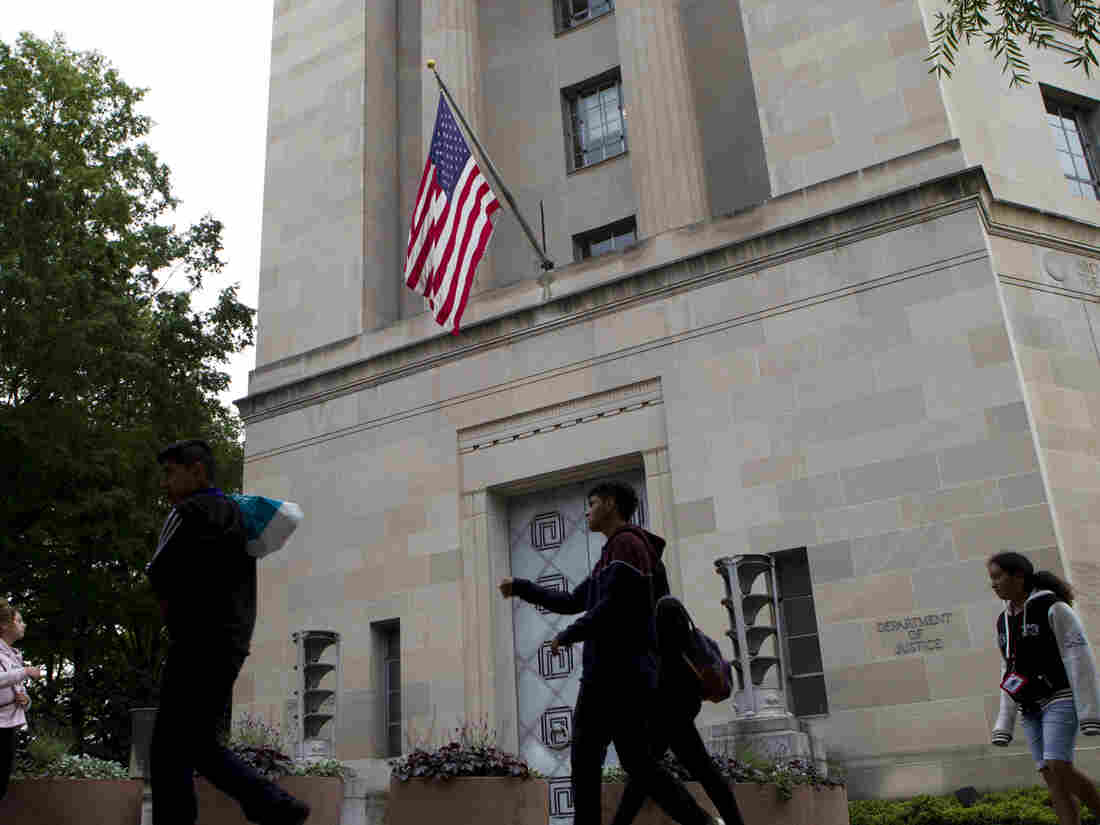 The Department of Justice is marking 150 years this month and some former employees and officials say the time has come for reforms in its relationship with the White House. Jose Luis Magana/AP hide caption 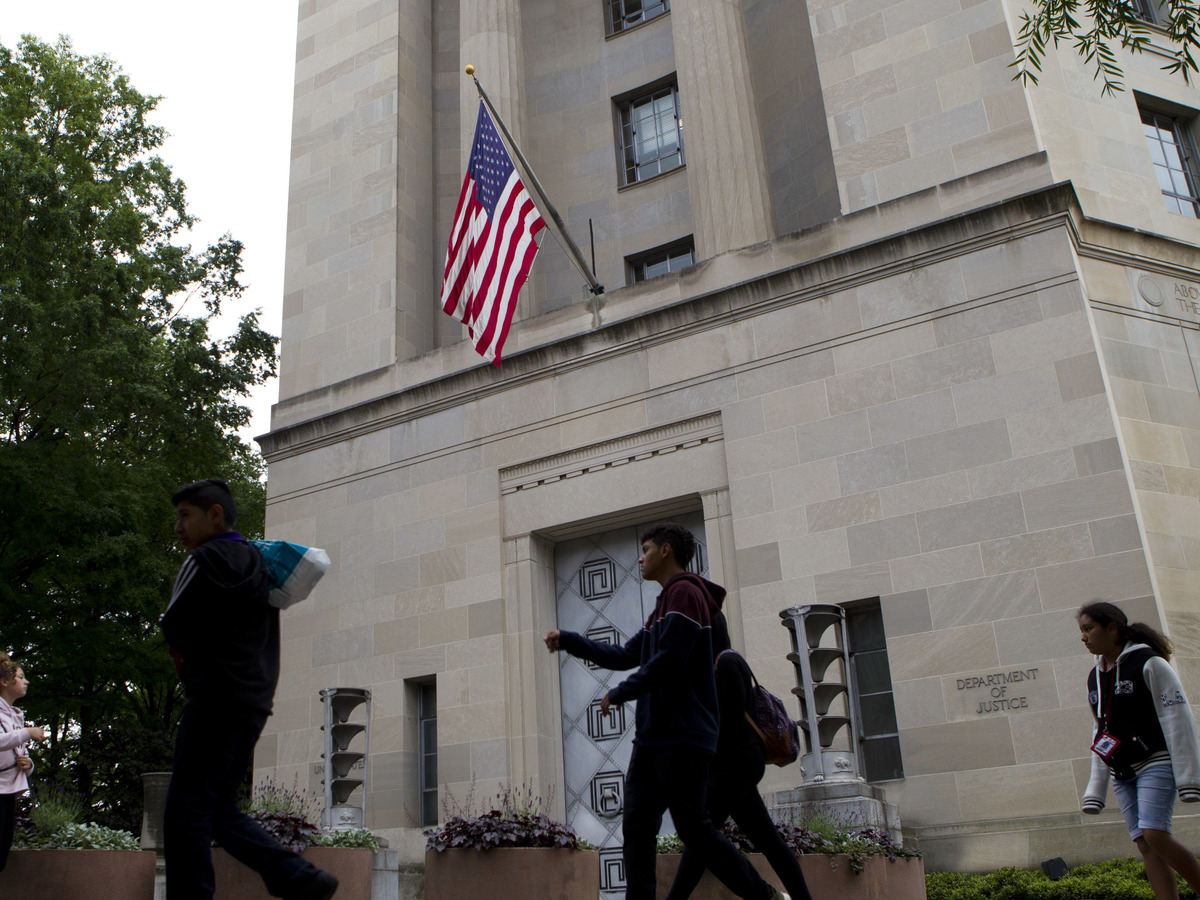 The Department of Justice is marking 150 years this month and some former employees and officials say the time has come for reforms in its relationship with the White House.

The Justice Department celebrates its 150th anniversary this month, but thousands of agency veterans aren't really feeling the love these days.

Instead, they worry that President Trump has demolished the norms that were supposed to insulate prosecutions from politics.

At the center of the debate is Attorney General Bill Barr, who's scheduled to testify Tuesday on Capitol Hill.

Barr has become a lightning rod for critics who argue that he's not an independent officer in the way the boss of the Justice Department should be, instead acting too much like a sympathetic counselor for the president.

In recent weeks, lawyers in Washington have pushed the bar association to investigate the attorney general. A bipartisan group of 65 professors and faculty at his alma mater, the George Washington University Law School, said he had "failed to fulfill his oath of office to 'support and defend the Constitution of the United States.'"

Barr's fans said the Justice Department is lucky to have him at the helm during a difficult time in history. And the attorney general has defended himself, including in an interview with NPR.

Longtime watchers in government and law said the environment today echoes the most chaotic period in the modern history of the Justice Department.

In May 1973, President Richard Nixon was staring down the Watergate investigation that would eventually lead to his downfall. Nixon was using the powers of the presidency to try to persecute his political enemies and then cover up the discovery of those actions.

As part of that effort, the president delivered a speech that evening that came to be known as his "no whitewash" address.

"Whatever may appear to have been the case before, whatever improper activities may yet be discovered in connection with this whole sordid affair, I want you to know beyond the shadow of a doubt, that during my term as president, justice will be pursued fairly, fully and impartially," Nixon said.

He announced he had selected a new attorney general, Elliot Richardson, whom he called "a man of unimpeachable integrity and rigorously high principle."

After Crackdown In Portland, Trump And Barr Tout Federal Police

"At stake in the final analysis is the very integrity of the governmental processes I came to the Department of Justice to help restore," he told workers assembled in the department's Great Hall, in October 1973.

After that debacle, nearly 50 years ago, Republicans and Democrats came together to agree on some bright lines at Justice. One of them was an expectation that presidents wouldn't use the Justice Department to go after their enemies — or reward their friends.

"There was this idea that we were all better off if there was a real independence between prosecutors and the president," explained Michael Waldman, president of the Brennan Center for Justice at New York University School of Law.

"That wasn't a law. It was, however, a set of standards agreed to by Republican and Democratic presidents. Donald Trump has put those standards in the shredder."

One, Trump's grant of clemency for his longtime adviser Roger Stone, who was convicted by a jury and sentenced to prison by a federal judge; two, the early release from prison of his former campaign chairman Paul Manafort; and three, the decision to abandon the case against his first national security adviser, Michael Flynn.

Those moves have led thousands of Justice Department veterans to demand that Barr resign or face investigation himself. One of them is former Massachusetts Gov. Bill Weld, a Republican who led the criminal division at Justice under President Ronald Reagan.

As for the standing of the department today, he told NPR, "it is depressing."

Weld pointed out that he famously resigned in 1988 amid concerns about the conduct of the attorney general back then, Edwin Meese. Weld said justice is supposed to operate apart from politics.

Instead, he said, it's now hostage to the president's tweets.

"Let's be honest — he despises the whole idea of the rule of law," Weld said of the president, against whom he ran for the Republican nomination before suspending his campaign last spring. "He despises the notion that you do justice without fear or favor. He's happier if he thinks the fix is in."

For his part, Barr has said the president has never talked to him about a specific criminal case. He said his role is to supervise cases at the Justice Department and to make sure they're fair. Last month, he told NPR he's doing his job, not systematically protecting the president.

Barr was asked about the allegations that he has overseen a pattern of special treatment in the cases involving Trump's friends.

"I'd say there is no such pattern," Barr told interviewer Steve Inskeep. "I would say that is a media narrative that's been adhered to, where things that happen all the time at the Department of Justice are misrepresented and cast as somehow suspicious."

Barr also has complained publicly about the appearances created by Trump's public comments and posts on Twitter and sought to make it known that he had contemplated resigning.

For skeptics, those kinds of statements have become meaningless as Trump keeps tweeting, encouraging Justice to go easy on his allies and target his enemies. The problem of perception endures even if political interference actually isn't taking place, department veterans said.

"The problem is that he seems to be acting as the bag-man for the president who has been attacking these prosecutions for years," Goldsmith said. "And whether there's the reality of carrying the president's water, there's clearly the appearance of it, and it has a terrible effect, I think, on the Justice Department's legitimacy and everything it does."

In September, Goldsmith and former Obama White House counsel Bob Bauer plan to publish "After Trump: Reconstructing the Presidency," a book about how the country might move on after Trump, whenever that time comes.

Among their suggestions: Congress could make tax disclosures mandatory for a president. Trump has declined to release tax and financial records that many of his predecessors did. In the past, political leaders did it as a matter of practice, but there is no law requiring it explicitly.

Lawmakers also could make clear that conflict of interest and obstruction of justice laws apply to the president, Goldsmith and Bauer write. And they could put constraints on some of the corrupt uses of the pardon power, and declare a president can't pardon himself. Trump has claimed he can.

Other ideas brewing in think tanks in Washington and New York include urging Congress to impose limits on contacts between the Justice Department and the White House, or at least keep track of those contacts in writing so that lawmakers can find out about them.

But former Deputy Attorney General Jamie Gorelick, who worked in the Clinton administration, is wary about legal prescriptions that would govern how people in the executive branch can communicate.

"I personally don't like most of the legislative ideas that have been bandied about for addressing alleged political influence at the Department," said Gorelick, now a partner at the WilmerHale law firm.

During her tenure in the Clinton administration, Gorelick said there were times when Justice leaders needed to let the White House know in advance about big cases, such as the antitrust lawsuit against Microsoft, which had economic impacts, and national security prosecutions that implicated foreign heads of state.

Goldsmith, of Harvard, said he thought the heavy work to shore up confidence at Justice needs to come from the next president and attorney general.

That's what happened after Watergate, when leaders issued new rules of the road to restore faith in the rule of law.

Gorelick said she thinks that's an essential job that matters for judges, jurors and other citizens, too.

"Ordinary citizens need to understand that justice is being applied appropriately and without regard to politics in order for them to trust the actions of the Department of Justice."