Accessibility links
How The $600 Pandemic Unemployment Payment Upended Household Economics The $600 weekly pandemic unemployment payments have single-handedly changed the economic equation in America as people earn more staying home than they did in the jobs they lost. 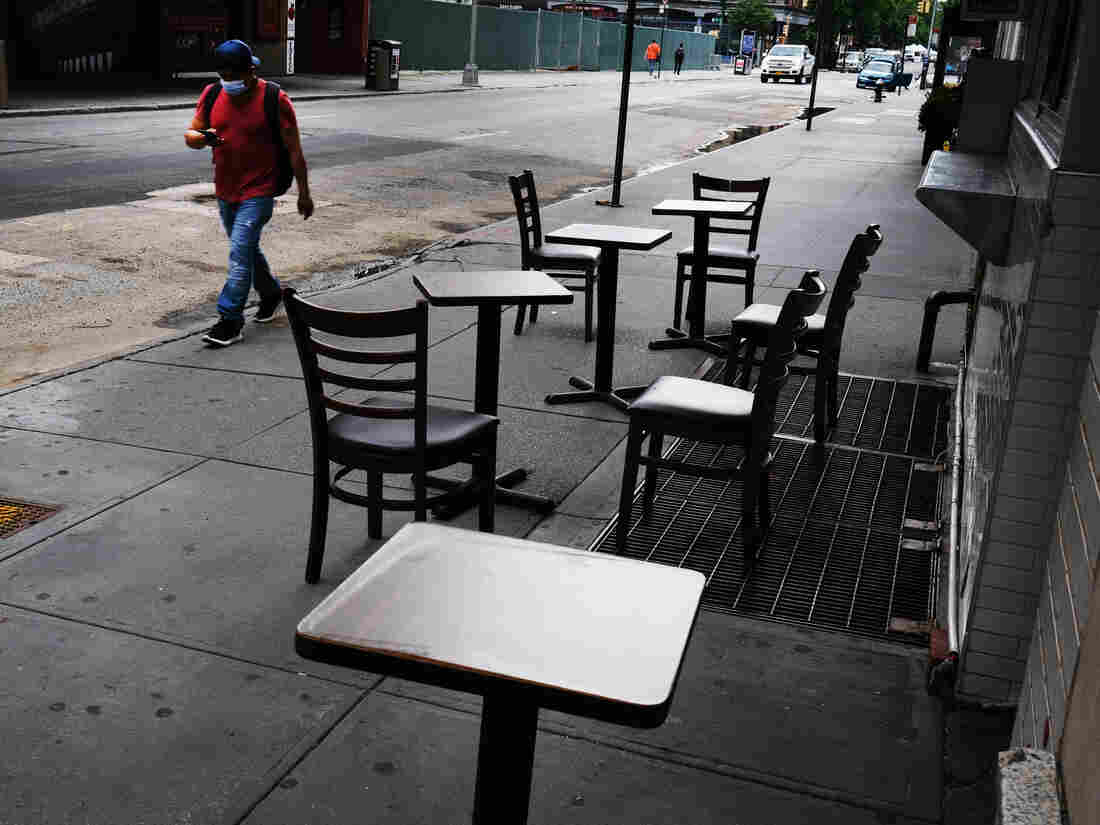 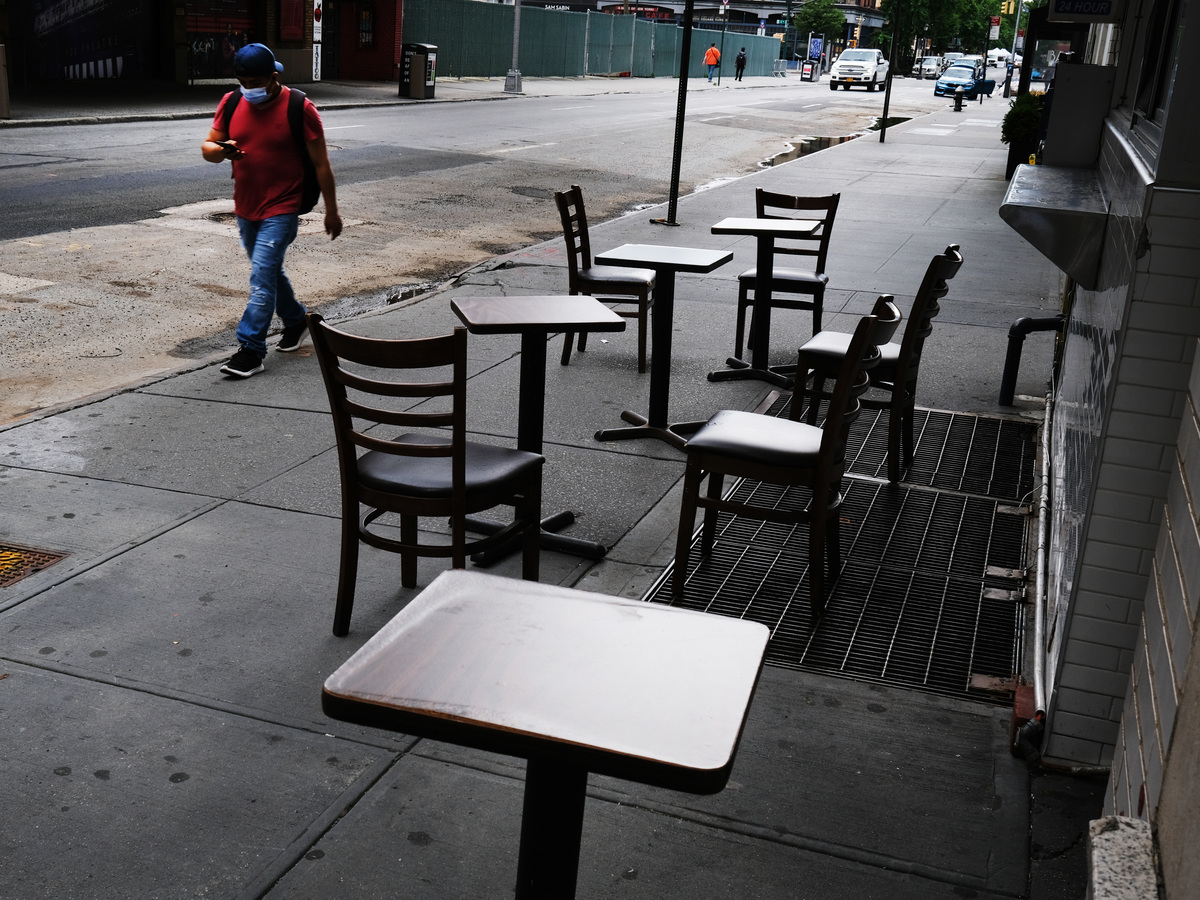 As the pandemic wreaks havoc in the U.S., snatching millions of jobs, the $600 weekly pandemic unemployment payments have single-handedly changed the economic equation in America.

On the face of it, $600 is a pretty unremarkable number.

The federal government has been paying this additional amount each week to every person who qualifies for unemployment benefits during the pandemic.

But astonishingly, the number has taken on huge significance in its short life. As the pandemic wreaks havoc in the United States, snatching millions of jobs, mostly in the low-income sector, the additional $600 weekly payment has become a financial lifeline for many households, helping pay for rent, food and clothing since the beginning of April.

It has also single-handedly changed the economic equation. One topsy-turvy outcome is that many people are earning more staying home than they did in the jobs they lost. And some businesses are finding that employees do not want to come back to jobs that pay less than what they can earn in unemployment.

But the payment now also makes up about 15% of the entire nation's wages and is actually fueling a portion of the U.S. economy — because unemployed people are spending more than they did before the pandemic, while those who have jobs are spending less.

Obviously, none of this folds neatly into a clear storyline. But they all will play a role in deciding the fate of this payment by members of Congress in the next few days. But at a time when coronavirus cases in the U.S. have crossed 4 million and more people are losing jobs, many worry that taking the payments away would have a devastating effect on households and the economy.

A lot is at stake, as we have seen since the beginning of the pandemic. For many, it has supported their most basic needs — people like bartender Courtney Woodruff, who lost her job at a Denver brewpub, for whom the extra unemployment pays for rent and food. "I don't really spend a lot," she says.

Her experience is backed by research that tracks how people are spending the money. "We have evidence that it's really been the federal stimulus money that has kept renters in their homes," says Priscilla Almodovar, CEO of Enterprise Community Partners, an affordable housing nonprofit. She worries that taking it away will lead to a tsunami of evictions.

'I make less money' working than those who lost their jobs

Still, there's no doubt that the pay has created inequities.

University of Chicago researchers found that for two-thirds of people who lose jobs, their unemployment benefits exceeded what they had been earning. The researchers even drilled down into specific low-paying jobs to see how those who kept working earned less than those who weren't. For instance, unemployed janitors were eligible to collect 158% of their pay, while the typical retail worker can get 142% of what they regularly earn.

NPR spoke to Katharine Thomas, who works the cash register at a small food co-op in Wisconsin. Thomas remembers seeing people around her lose jobs and collect the state unemployment income plus the extra federal relief of $600 a week.

"I felt very angry," she says. "I have to go to work. And I make less money, being essential. $600 a week — that's almost the whole paycheck for me. Even with hazard pay, I still don't make that much money."

Thomas received an extra $2 an hour for working during the pandemic. It was part of the temporary bumps in pay — called hero pay, thank you pay or hazard pay — that many employers, like Kroger and Amazon, paid workers who risked their health to continue to work during the pandemic. That extra pay of between $1 to $3 an hour has now largely gone.

When the unemployment office is competition for business owners

The $600 a week works out to about $15 an hour, which is higher than what employers pay workers in many parts of the country. So if a jobless person receives $340 per week in state unemployment benefits — the national average — then with the additional payment from the federal program, the total before taxes would be $940 each week.

These expanded federal benefits were no match for coffee shop owner Sky Marietta, who paid her employees between $10 and $15 an hour in Harlan, Ky. She voluntarily decided to close her coffee shop and lay off her employees so they would qualify for expanded unemployment benefits.

Universal basic income is here. Should it stay?

The payment that came into being via a hastily passed bill was sudden and unexpected, like the virus itself. Its immediate outcomes, however, are leading economists to assess the income gap.

Last year, when Democratic presidential candidate Andrew Yang proposed a payment of $1,000 a month to every adult in America for losing jobs to technological advances such as automation, his rival 2020 candidates laughed at his proposal. Yang called it universal basic income, the premise of which is to alleviate poverty and stagnant wages for those who lose jobs for no fault of their own, while providing economic stimulus to American businesses.

And yet, within months, the coronavirus did exactly that. Jobs disappeared for tens of millions of Americans. In response, the U.S. government mailed out stimulus checks to most households of $1,200, plus $500 for each child, and then added the $600 enhanced unemployment benefit.

And just like that, the coronavirus brought universal basic income into the hands of tens of millions of Americans.

Now, at least two studies show that America's poverty rate hasn't worsened significantly, despite the onslaught of the worst recession since the Great Depression. That's because this additional payment is keeping many low-income families afloat and is even allowing them to spend a little more than they normally would.

Economists say the spending exposes the large numbers of people living paycheck to paycheck and that it is time to examine policies to help with better distribution of wealth in this country.

What we know is that currently, about 30 million people in America are receiving it and the payment is set to expire July 31. Because of the way the state unemployment payment is scheduled, the last of the $600 would have gone out this past weekend just as there's evidence of more people losing jobs with the latest spikes in cases in the South and West.

The intense debate now in Washington is whether to extend these benefits or replace them with something else.

Of particular worry is that lower-income households and women are being disproportionately affected by COVID-19 job losses. Research from the University of Chicago shows that over 57% of women making less than $30,000 lost their income during the first month of crisis.

Another huge worry — a large portion of the job losses are permanent. "We estimate that 42% of recent pandemic-induced layoffs will result in permanent job loss," said Steven Davis of the University of Chicago Booth School of Business.

So even if the government paid money for people to go back to work — as proposed by some — there won't be jobs to return to.

The economy now relies on it

What's clear is that low-income households and the economy are now hooked on it for survival.

The extra pandemic payment achieved a basic goal at the heart of it, which was that it has helped boost pockets of the economy. People who got the extra money did spend more than those with jobs. JPMorgan Chase Institute, a think tank associated with the bank, found that households receiving benefits spent 10% above pre-pandemic levels, compared to a spending drop of 10% for employed households. "Now more than ever, unemployment insurance benefits play an outsize role in the U.S. economy," said Diana Farrell, CEO of the institute.

And while it is not a magic bullet, until the economy stabilizes and more jobs come back, it is clear that taking away the extra boost will be devastating for both households and the economy.