Accessibility links
Democrats Balk At New Republican Proposal For Pandemic Relief Bill After days of delays, congressional Republicans unveiled their $1 trillion proposal for a fifth wave of pandemic relief. Democrats are not on board — signaling tough negotiations ahead. 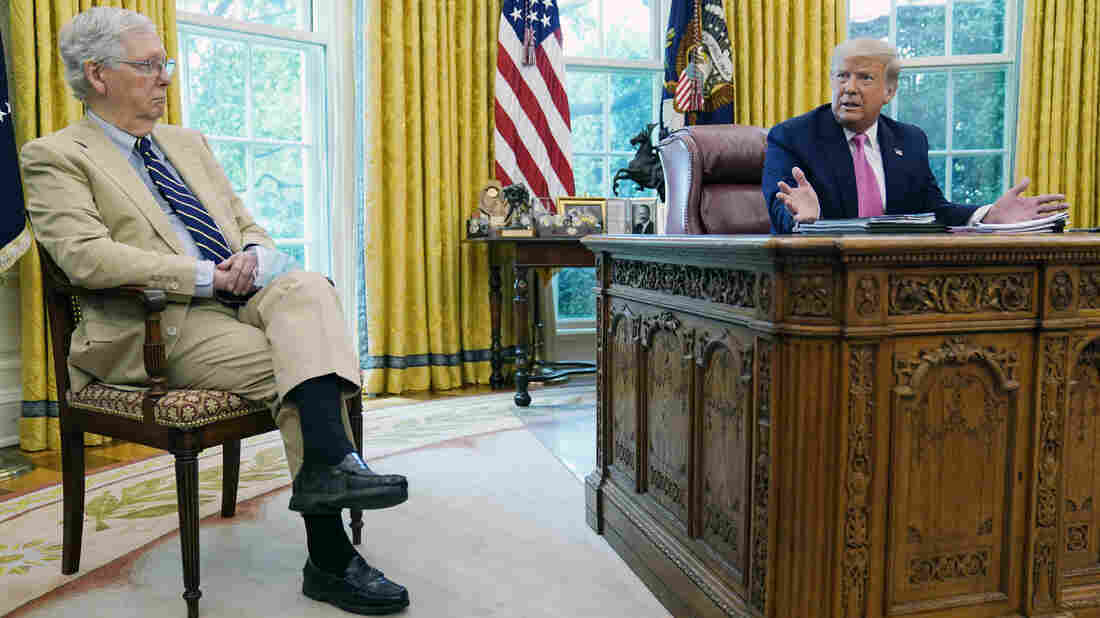 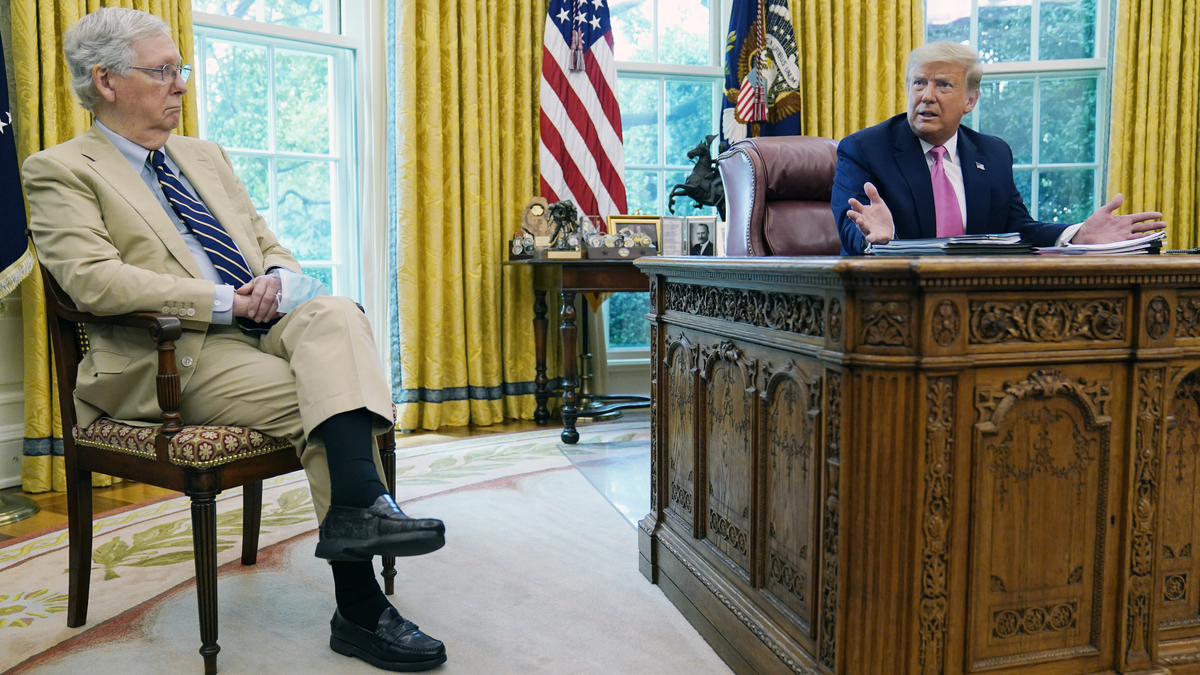 Senate Majority Leader Mitch McConnell, R-Ky., with President Trump at the White House. The Republican Party has unveiled a new pandemic relief bill, but tough negotiations lie ahead with Democrats.

After days of delays, congressional Republicans rolled out their proposal for a fifth wave of pandemic relief aid on Monday, setting the stage for a showdown with Democrats, who say the two sides remain far apart.

The plan, which was introduced by Senate Majority Leader Mitch McConnell, R-Ky., focuses on new funding for schools and a new round of payments to Americans and allows for some additional wage replacement for unemployed workers.

It also includes a marquee issue for Republicans in this relief bill: new legal protections for businesses against pandemic-related lawsuits.

"We have produced a tailored and targeted draft that will cut right to the heart of three distinct crises facing our country: getting kids back in school, getting workers back to work and winning the health care fight against the virus," McConnell said from the Senate floor.

McConnell said the measure would be called the HEALS Act, or the Health, Economic Assistance, Liability Protection and Schools Act. Key committee chairs drafted the various components of the bill and introduced them later Monday in separate speeches on the Senate floor.

McConnell said the bill would include another round of direct payments to Americans in the same amount that was in the CARES Act that Congress passed in March — $1,200 for individuals up to an income cap, with more for families with children.

McConnell also said there would be a supplement to unemployment benefits. However, he made clear that he does not support extending the current $600 per week now in effect, saying: "We have to do it in a way that does not slow down reopening."

Senate Finance Committee Chairman Chuck Grassley released details showing that the supplemental payment would fall to $200 per week through September.

Then starting in October, it would be replaced with an amount that would replace 70% of lost wages through a formula created by states, capping the extra payments at $500 weekly. Those states unable to implement a new system could apply for a waiver and continue a fixed amount for up to two months.

Republicans and Democrats have feuded over how much unemployment support should replace someone's lost wages — at, below or more than what a worker was being paid before the economic disruption wrought by the pandemic.

In addition, McConnell indicated there would be money for schools, coronavirus testing and additional loans to small businesses, as well as legal protections for health care workers and businesses. He said the bill would also include a plan to manufacture personal protective equipment in the U.S. to avoid the need to acquire a stockpile from China.

McConnell didn't immediately unveil the cost of the bill, but it has been estimated it will cost around $1 trillion. 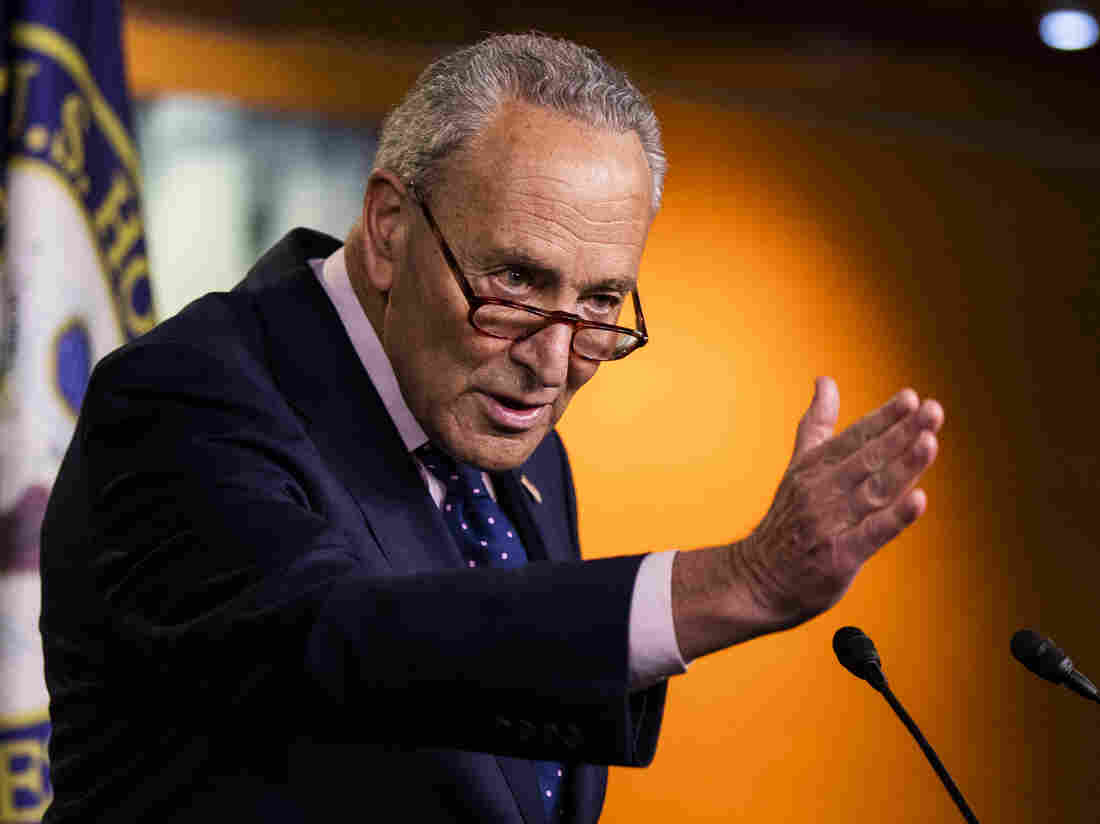 Senate Minority Leader Chuck Schumer, D-N.Y., faulted Republicans over their pandemic relief proposal because he said it came too late and was too stingy. Tough negotiations lie ahead. Manuel Balce Ceneta/AP hide caption 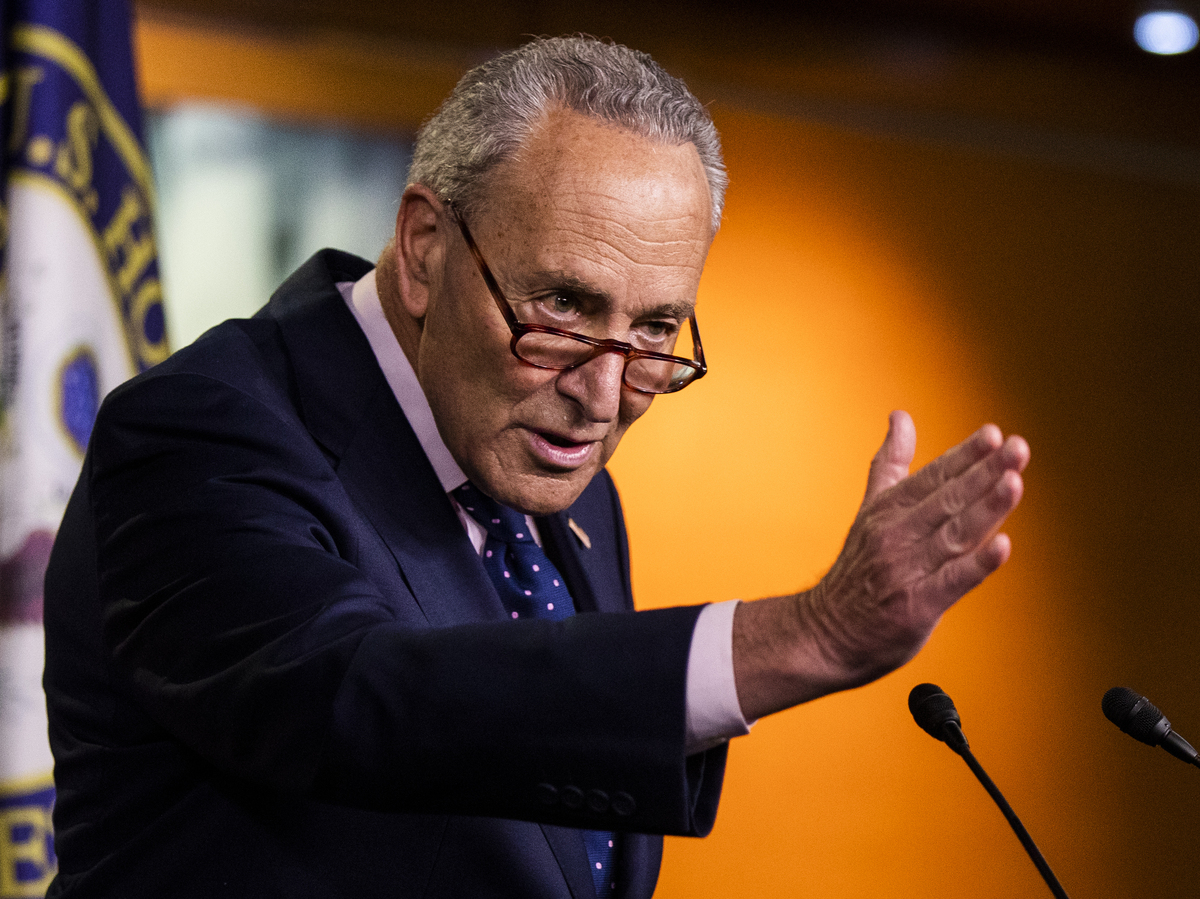 Senate Minority Leader Chuck Schumer, D-N.Y., faulted Republicans over their pandemic relief proposal because he said it came too late and was too stingy. Tough negotiations lie ahead.

The move sets in motion difficult negotiations for Republicans and Democrats, with the parties diverging dramatically on this new effort in coronavirus relief.

This year, Congress approved four rounds of relief aid in a matter of weeks, with talks between White House officials and Democrats cementing deals totaling about $3 trillion in aid.

Now, Democrats say Republicans should instead start with their proposal, known as the HEROES Act, approved by House Democrats more than two months ago.

Senate Minority Leader Chuck Schumer, D-N.Y., responded to McConnell with a speech of his own that faulted Republicans' inability to settle their own positions, which he said not only wasted time but resulted in a proposal that doesn't provide enough help. He called it "weak tea" and "too little, too late."

Schumer mocked what he called Republicans' fears about "big-money donors" who object to helping workers as opposed to favored big industries.

Sen. Ron Wyden, D-Ore., later called the unemployment assistance proposal "a punch in the gut and a slap in the face" to jobless Americans.

The bill also includes nearly $1.8 billion to design and build a new Washington, D.C., headquarters for the FBI — a project that has been debated for years and something President Trump said last week was needed because the existing building, located across the street from one of his family's hotels, is in disrepair.

Initially, McConnell reacted with surprise when asked at a Monday evening press conference about the FBI building provision, saying it wasn't in there. Later, McConnell said the Trump administration was pushing for it.

"Obviously we had to have an agreement with the administration in order to get started, and they'll have to answer the question of why they insisted on that provision," McConnell said. "You'll have to ask them."

White House spokesperson Judd Deere said in a statement that "as President Trump has said, the FBI desperately needs a new building and this measure provides critical funding for this project that would keep the building responsibly near the Department of Justice."

Sen. Lindsey Graham, chairman of the Senate Judiciary Committee, said he was against the move.

"I guess you got to build a building, this is the last thing to leave the station," Graham told pool reporters, referring to the legislation being potentially the final bill to get approved before an August recess. "But I'm not so sure it's COVID related. It doesn't have to be technically COVID related, I just don't know why we're doing it."

Democratic leaders said additional details on the FBI provision were hard to come by after meeting with White House officials on Capitol Hill late Monday.

"They acknowledged it when we asked them," Schumer said.

Schumer and House Speaker Nancy Pelosi met in her office with Treasury Secretary Steven Mnuchin and White House Chief of Staff Mark Meadows. Pelosi had invited Mnuchin and Meadows to her office following the GOP bill roll out.

After their meeting, Schumer and Pelosi said the two parties remain far apart, and Pelosi said she was against a separate bill only extending some of the extra unemployment benefits.

Meadows remained optimistic after he and Mnuchin left the Monday evening meeting.

"It was a good meeting. We'll be back tomorrow," Meadows told a pool reporter.

Congress is slated to begin its recess Aug. 7, leaving negotiators a mere two weeks to wrap up negotiations and potentially send a bill to Trump's desk.