Accessibility links
Big Tech Hearing To Ask CEOs: Are Amazon, Apple, Facebook, Google Too Big? The heads of Facebook, Google, Amazon and Apple will face lawmakers' questions about whether they are using their power to squash competition. 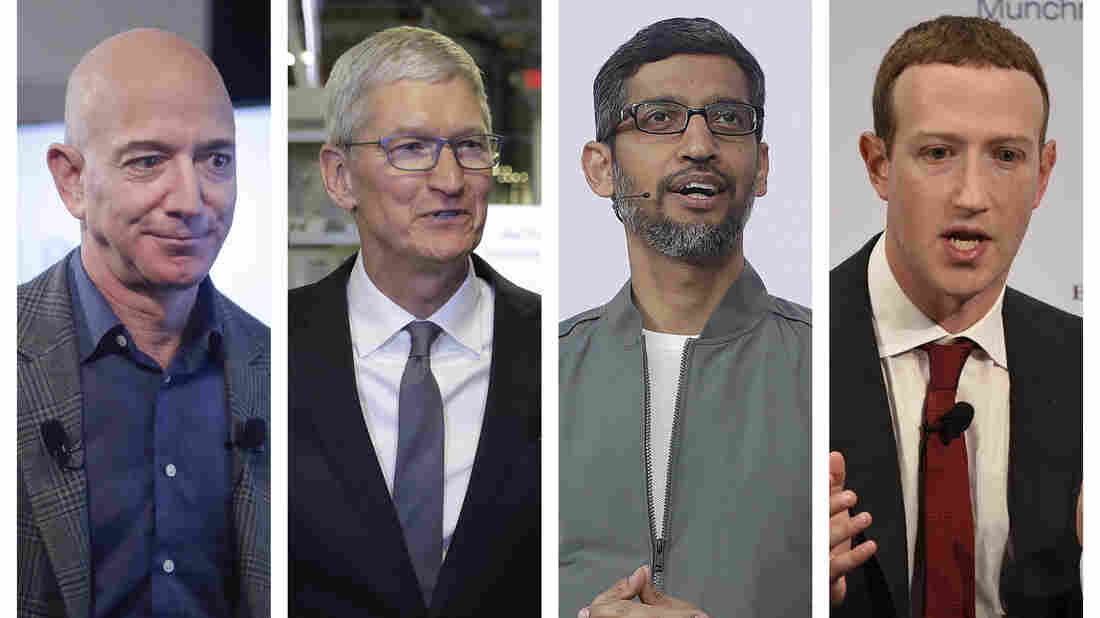 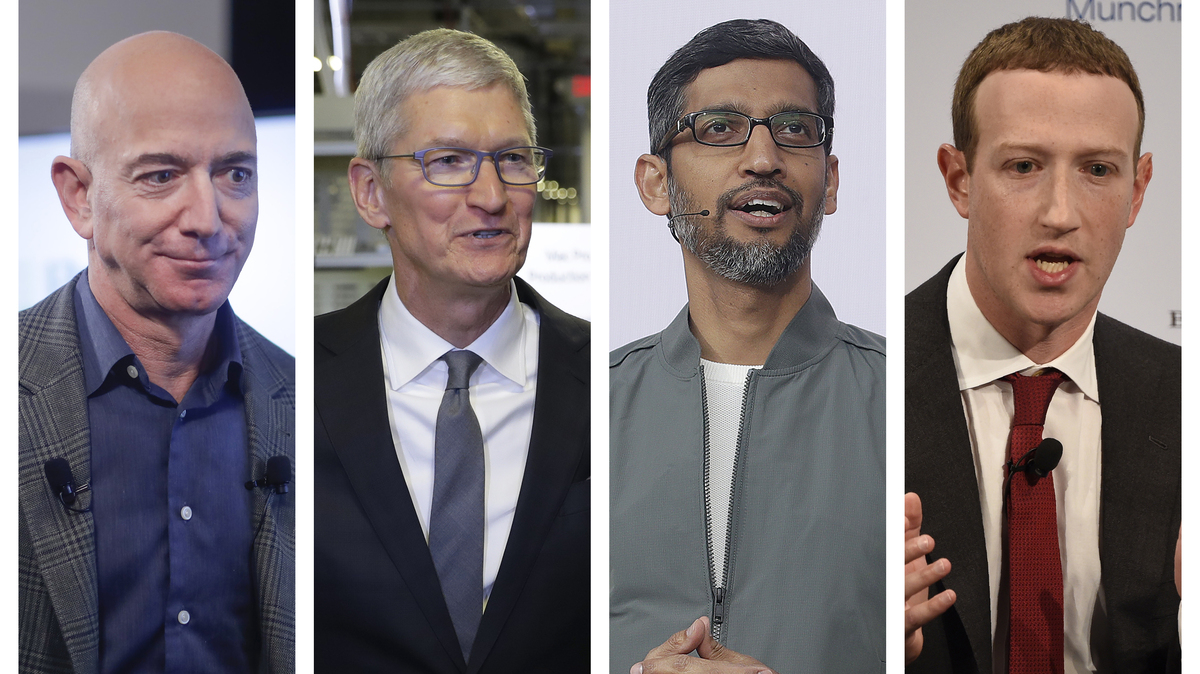 Some of the world's most powerful CEOs are coming to Capitol Hill — virtually, of course — to answer one overarching question: Do the biggest technology companies use their reach and power to hurt competitors and help themselves?

What: The tech execs will answer lawmakers' questions in the culmination of a year-long investigation by the House Judiciary Committee's antitrust panel into the tech giants' power that spanned 1.3 million documents and hundreds of hours of hearings and closed-door briefings.

Why: The four companies shape how billions of people communicate, learn, work, shop and have fun. Americans' reliance on these platforms has only intensified as the coronavirus pandemic has kept us in our homes. Plus, the hearing comes as more Democrats and Republicans openly challenge the immense power of Silicon Valley.

What's next: The tech giants are under investigation by regulators in the U.S. and Europe, who could bring lawsuits and even force breakups. Congress' primary role is to write antitrust laws. The conclusions by House lawmakers — expected in a report in the coming weeks — could reshape the tech industry. That is, if the political will exists to take on an economic powerhouse.

Amazon by the numbers

Jeff Bezos To Washington: 'My Dad's Name Is Miguel. He Adopted Me When I Was 4'

Critics say Amazon abuses its position as the operator of a top online marketplace as well as a merchant on the same platform. They argue that Amazon undercuts competitors by charging lower prices at a loss. Officials in the E.U. are soon expected to reveal the results of their investigation into whether Amazon exploits data it collects from other sellers for its own benefit.

Critics have also targeted Amazon's multitude of business streams, questioning the pace of work and conditions in its warehouses, the size of its grip on delivery networks and cloud computing, the use of its facial recognition technology by law enforcement and the data practices of its Internet-connected devices.

Amazon says in each of it different business lines, it's one of many competitors. In its main business of retail, for example, Amazon often sizes itself against the entire industry rather than just e-commerce. The company's focus on convenience and low prices has won over consumers, who are the main concern of U.S. competition law.

Amazon touts itself as a big job creator with generous pay and a marketplace that supports scores of small and medium-sized businesses, with third-party sellers now accounting for more than half the sales on the platform.

Apple by the numbers

Critics say Apple uses the App Store to give itself an unfair advantage. In order to reach consumers with iPhones and iPads, app developers must use Apple's system of processing payments. That way, Apple pockets 30% of every purchase.

Yet Apple's own apps, like Apple Maps and Apple Music, do not have to pay any App Store fees. Apple, as part of its terms and conditions, does not allow companies to tell consumers about cheaper ways to download apps outside of the App Store.

This arrangement has led rival Spotify to claim that "Apple acts as stadium owner, referee and player and tilts the playing field in favors of its services."

Apple says it has paid out $155 billion to third-party developers from App Store purchases worldwide since 2008. It also points out that 84% of apps in the App Store are free to download. It claims taking a 30% slice of app sales is required to support the highest level of privacy and security protections.

Apple last week promoted a study it commissioned finding that its 30% commission rate is in line with fees charged at other companies and in other industries for services like videos, podcasts, e-books and audiobooks. An Apple spokesman told NPR that those who complain about the fee are seeking a free ride and "don't want to play by the same rules as everyone else."

Critics say Facebook has stifled competition by buying upstart social apps like Instagram and WhatsApp. It's also a big player in digital advertising, thanks to the deep trove of data it collects on its users.

Facebook is embroiled in plenty of controversies that aren't directly related to antitrust, such as its role in spreading election and health misinformation, its failures to protect users' data and accusations of political bias. Senior committee aides say they want to keep the hearing "laser-focused" on competition — but Facebook's other problems may prove too tempting for lawmakers to ignore. Some Republicans have pushed to broaden the hearing to address how social media platforms treat conservatives.

The Federal Trade Commission and state attorneys general are also investigating whether Facebook has broken any competition laws.

Facebook says it faces plenty of competition from apps like TikTok, in social media, and Google, in advertising. Its acquisitions of Instagram and WhatsApp were scrutinized by regulators at the time. When critics like Massachusetts Sen. Elizabeth Warren call for breaking up Facebook, Zuckerberg points to China as the greater threat to users' privacy and American innovation. The CEO has also called for more regulation of election security, privacy, data and harmful content online.

Google by the numbers

Critics say Google has enormous power over how people find information — showing up at the top of search results can make or break a company. Smaller rivals such as Yelp accuse Google of favoring its own products, from Google Maps to YouTube.

It also has a lot of power in the complex world of digital advertising. Publishers say that's hurt their businesses, and critics worry that marketers end up paying more to get their ads in front of customers.

The Justice Department and state attorneys general are also investigating Google. They're expected to sue the company in the coming months, kicking off a big legal battle.

Google says its services create choice for users and for small businesses and that it "engag[es] in robust and fair competition." It also points to a 2013 investigation by the Federal Trade Commission that found Google didn't violate competition laws in how it displays search results.