Accessibility links
Livestream: Attorney General Barr To Testify In House Judiciary Hearing Democrats questioned and criticized the attorney general in a marathon hearing on Tuesday that covered a wide range of controversies. Barr stood his ground and defended himself and President Trump. 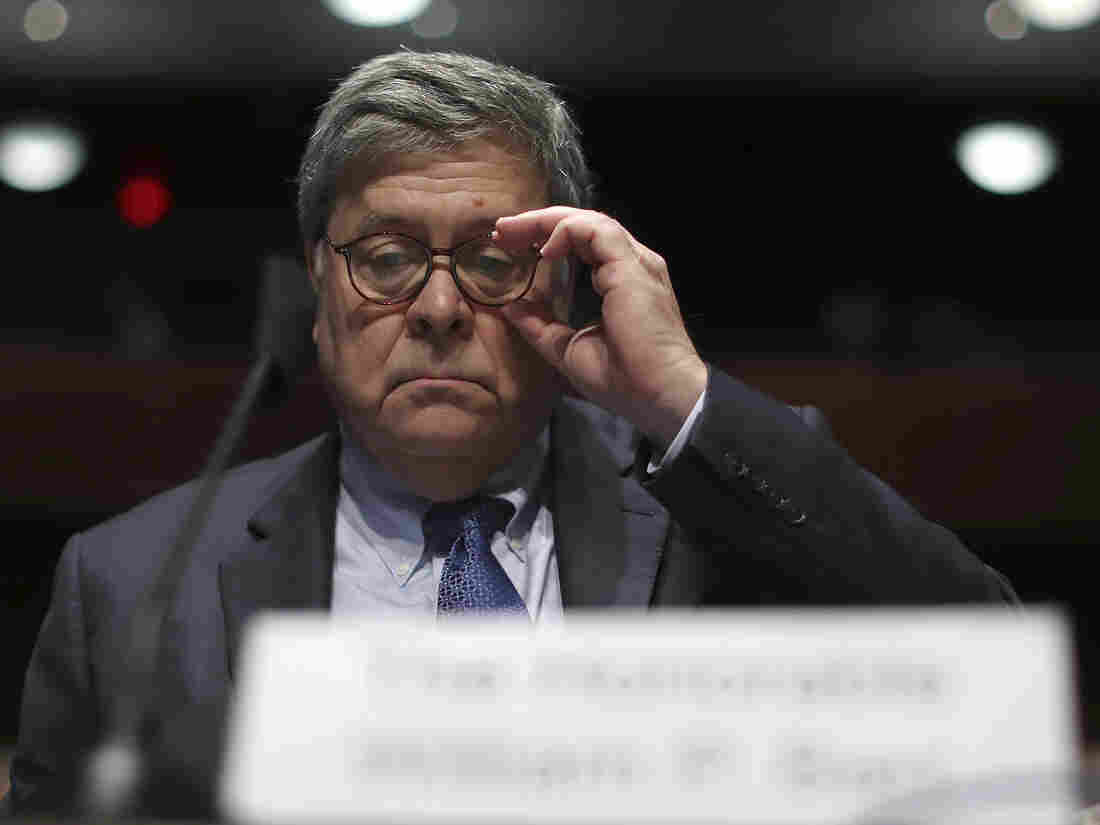 Attorney General William Barr listens during a House Judiciary Committee hearing on the oversight of the Department of Justice on Capitol Hill, Tuesday, July 28, 2020 in Washington. Chip Somodevilla/AP hide caption 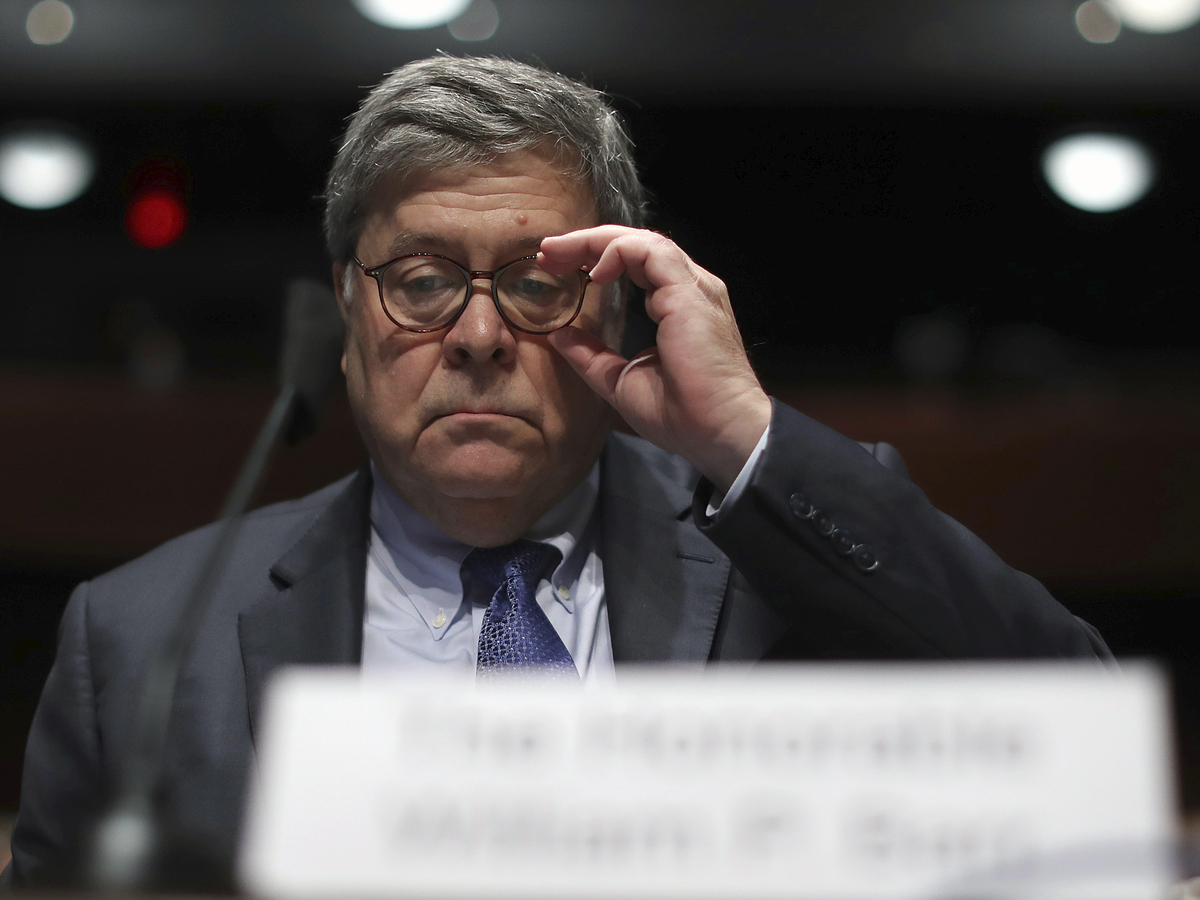 Attorney General William Barr listens during a House Judiciary Committee hearing on the oversight of the Department of Justice on Capitol Hill, Tuesday, July 28, 2020 in Washington.

Attorney General William Barr puts the founding principles of the Justice Department "more at risk than at any time in modern history," the chairman of the House Judiciary Committee charged on Tuesday.

Rep. Jerry Nadler, D-N.Y., excoriated Barr because he said the attorney general sought conflict with Americans at an unprecedented scale, including via federal law enforcement crackdowns, and has created what Nadler called a special reserve of justice for the well-connected.

Barr is a longtime political target of the panel's majority Democrats, who censured him last year during one of a number of bitter disputes over access to information and the House of Representatives' powers of oversight.

On Tuesday, Nadler said the Justice Department had become "a shadow of its former self."

Democrat after Democrat followed on Tuesday along a number of lines of assault, criticizing Barr for the Trump administration's handling of the coronavirus pandemic, for his management of the Justice Department and his handling of individual cases.

Barr defended his independence vehemently, saying the president "has not attempted to interfere" in decisions related to criminal cases.

"Indeed, it is precisely because I feel complete freedom to do what I think is right that induced me serve once again as attorney general," he said.

The Justice Department Is Turning 150. Some Agency Veterans Say It Needs A Facelift

The attorney general has told NPR he believes the department is separated appropriately from the White House and that he has a responsibility to make sure cases are handled correctly.

And Barr told lawmakers on Tuesday that he had no relationship with Trump before being nominated and was prepared to "slip happily into retirement" with nothing more to prove in his career.

Barr rejected the characterization that he has embraced a role as the president's own man atop the federal law enforcement apparatus.

All the same, Nadler's panel has heard from Justice Department whistleblowers and outside critics who argue that Barr's camp leans on underlings to deliver the results that it — and the White House — want.

And they faulted him for deploying federal agents to suppress protesters in Washington D.C., Portland, Oregon and elsewhere.

"The protesters aren't mobs — they're mothers and veterans and mayors," Nadler said. Real leadership, the chairman said, would involve de-escalation; "instead you use pepper spray and truncheons on American citizens."

The attorney general rejected that.

Federal officers are deployed to help local agencies, he said, and, in the case of Portland, to protect the federal courthouse there against what Barr called nightly attacks. The attorney general also cited the numbers of police officers and federal agents who have been injured in the course of carrying out their duties.

Democrats said they fear that Barr is responding to orders from Trump to create ugly scenes of violence and needlessly escalate clashes with demonstrators in order to heighten a narrative of danger that Trump wants to program into a "law and order" re-election campaign.

Nadler asked Barr whether he and Trump have discussed the re-election campaign; though the attorney general said he preserves his official independence, he acknowledged that he has discussed it in meetings at the White House.

"I'm a member of the Cabinet and there's an election going on," Barr said. "The topic comes up in Cabinet meetings — it shouldn't be surprise that it comes up."

And Barr volunteered that he thought his conduct and that of the Justice Department had been appropriate with respect to Trump's friends, citing Stone and Flynn in particular.

Flynn's case was problematic, Barr argues, which is why he supported dropping the charges even after the former national security adviser's admissions of guilt.

As for Stone, Barr pointed out that he oversaw the prosecution and supported it — but what Barr said he didn't support was the prospect of an excessive sentence, which he interceded to oppose in court.

"I agree the president's friends don't deserves special breaks — but they also don't deserve to be treated more harshly than everyone else," Barr said.

Meanwhile on Tuesday at a parallel hearing, the House Natural Resources Committee heard from a Washington D.C. Army National Guard member who testified that he was "deeply disturbed" by the actions of law enforcement during last month's crackdown by law enforcement against protesters at Lafayette Square across from the White House.

Maj. Adam DeMarco told lawmakers that it was his observation that the demonstrators "were engaged in the peaceful expression of their First Amendment rights, yet they were subjected to an unprovoked escalation and excessive use of force."

DeMarco said he was assigned to act as a liaison between the D.C. Guard and the U.S. Park Police, and was in the square when law enforcement forced demonstrators out of the park, minutes before President Trump crossed the area on his way to a photo op in front of St. John's Church.

DeMarco contradicted testimony from the Park Police's acting Chief Gregory Monahan that police used a "long-range acoustic device" to warn the protesters to leave the park that evening. DeMarco said police used a standard-issue megaphone placed on a bench, which he said was barely audible from where he stood some 20 yards way.

DeMarco, a West Point graduate and Army veteran who served in Iraq, also said based on his training he believed Park Police fired tear gas at the demonstrators, and said that he found spent tear gas canisters.

Monahan denied his officers used tear gas, and said the decision to clear the park was made in consultation with the U.S. Secret Service, but that neither White House officials nor the Department of Justice were involved.

Monahan said the action was undertaken in advance of a 7 p.m. Washington curfew and that "there is 100 percent, zero correlation between our action and the president's visit to the church."

At Barr's hearing elsewhere at the Capitol, however, the attorney general told members of Congress that he was aware throughout the day that Trump planned to leave the White House and eventually that Trump would pose for photographers — as he did after the square had been cleared.

The House Judiciary Committee's Republicans, led by the panel's ranking member, Rep. Jim Jordan, R-Ohio, mounted a loyal defense of Barr and Trump and also drew attention to the findings of investigations that have embarrassed the Justice Department and FBI.

Barr, in their telling, is cleaning house and getting to the bottom of what Trump's allies call wrongdoing.

"Spying," Jordan said on Tuesday, alluding to what he called the real basis for the Russia investigation. "That's why they're after you, Mister Attorney General."

Jordan hailed Barr's revelation that he has commissioned John Bash, the U.S. Attorney for the Western District of Texas, to look into the use of national security "unmasking" authority with respect to Flynn toward the end of President Barack Obama's administration.

Jordan also praised what he called Barr's support for police as a clear alternative to what he said were proposals by Democrats to withdraw support from law enforcement.

He played a video apparently created by the committee's Republican staff that showed what appeared to be police videos and some news footage depicting violence directed at law enforcement officials and some injured officers.

Some activists support directing a portion of current police budgets to other agencies, such as for mental health treatment; Trump, Jordan and Republicans have seized on the brand "defund the police" to charge that Democrats want to disestablish police departments altogether.

Nadler said Tuesday's hearing is Barr's first time before the House Judiciary Committee both in his current stint as attorney general and also from the last time he served in that role, under President George H.W. Bush.