Accessibility links
Amazon And CEO Jeff Bezos Under Scrutiny In U.S. House Hearing The first congressional testimony by Jeff Bezos comes at a time when he and Amazon are seeming at their zenith, occupying ever-growing space in American culture. 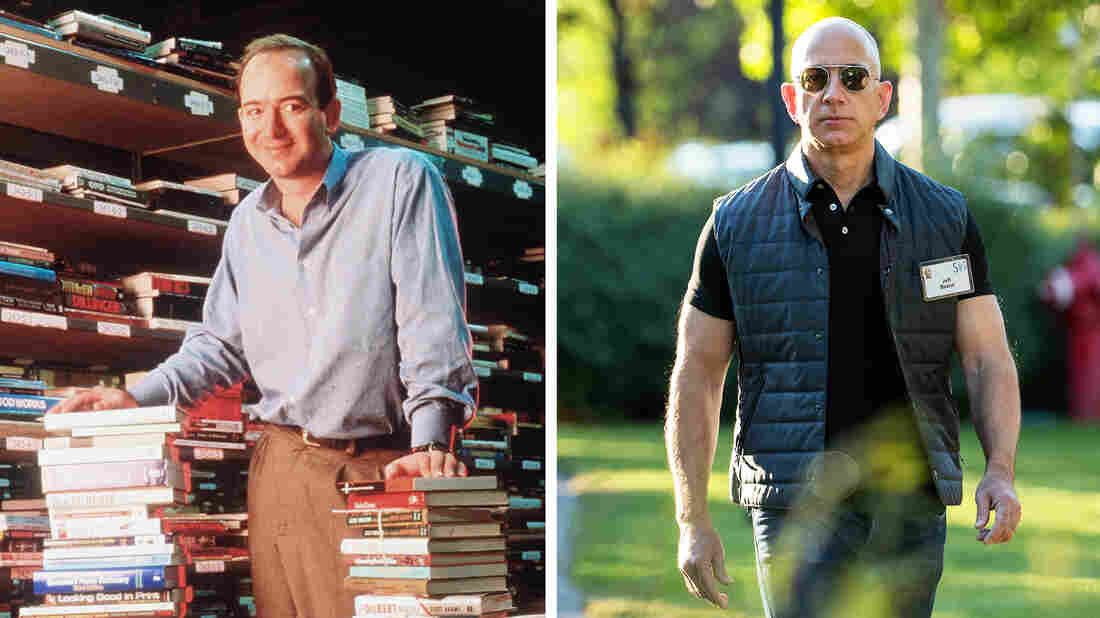 Amazon founder and CEO Jeff Bezos in 1997 (left) and in 2017. He will appear before Congress for the first time this week a much-transformed leader of a much-transformed company. Paul Souders and Drew Angerer/Getty Images hide caption 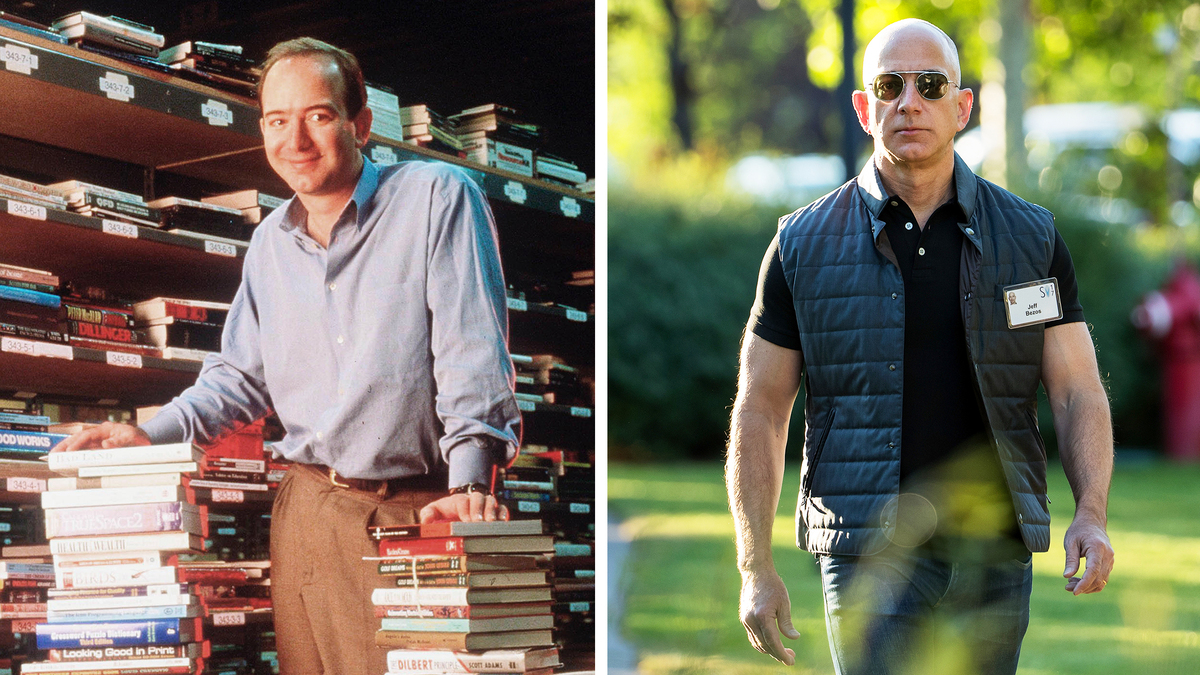 Jeff Bezos is a man of many firsts. On Wednesday, he'll face a new one: his first appearance before Congress.

In a hearing via video with other major tech CEOs, lawmakers will grill Amazon's founder about the reach of his company, the rules it sets for workers and the power imbalance with other sellers on its platform.

It all comes at a time when both Bezos and his business are seemingly at their zenith. And the transformation of both the founder and his company couldn't be more tightly woven together.

Big Tech In The Washington Hot Seat: What You Need To Know

Jeff Bezos To Washington: 'My Dad's Name Is Miguel. He Adopted Me When I Was 4'

About 17 years ago Bezos gave a Ted Talk, comparing the dot-com boom to the early days of the invention of electricity — the primitive "1908 Hurley washing machine." The promise of the Internet was so young, Bezos was saying, that it made no sense to be bothered by doubters or negative headlines such as "Amazon.bomb." 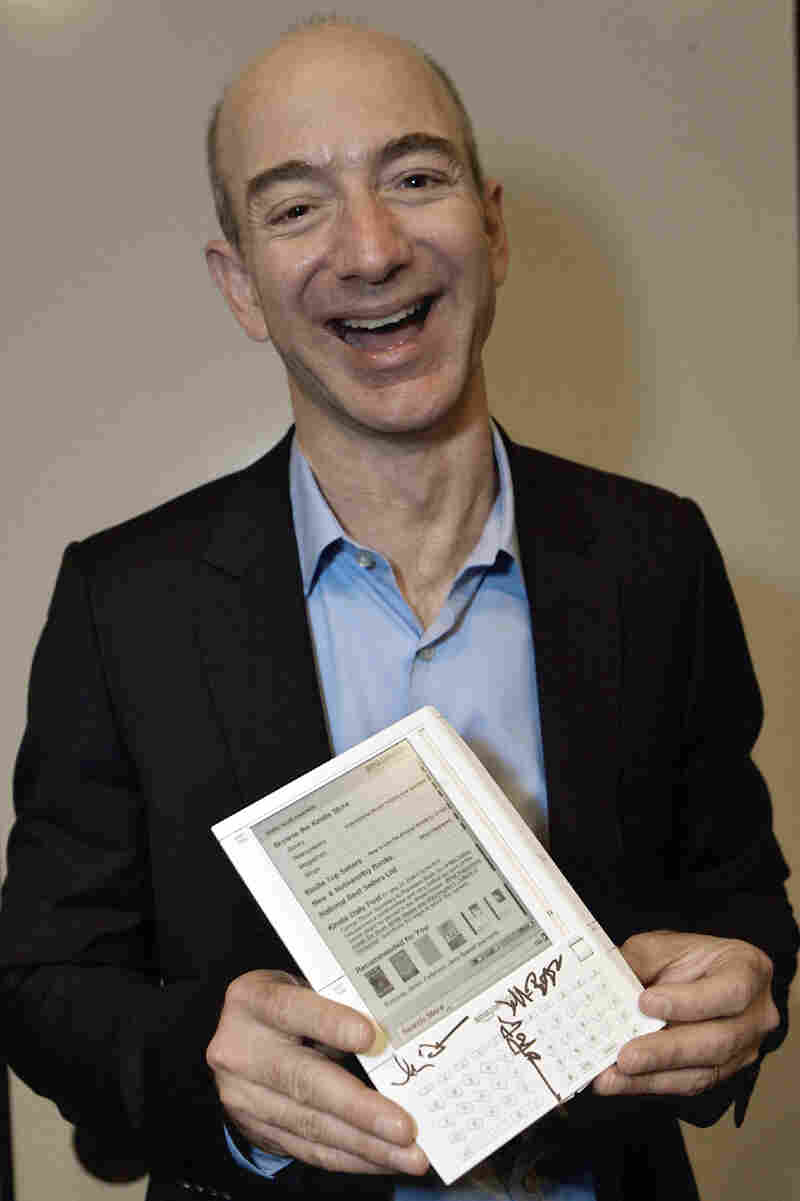 Bezos holds one of the earliest versions of the Kindle e-reader at the Book Expo America in Los Angeles in 2008. Damian Dovarganes/AP Photo hide caption

"The first noticeable thing to me in recent years was the way he physically transformed himself as he became more wealthy," says Chip Bayers, who wrote one of the first definitive profiles of Bezos for Wired back in Amazon's early days.

Back in the '90s, Bezos was a Pillsbury biscuit-chomping Trekkie family man, with wispy hair, a sensible Honda and an infinite assortment of khaki pants. In 2017, at age 53, shortly before leapfrogging Bill Gates as the world's richest person, the "jacked Bezos" meme broke the Internet. People joked that he went from a dorky guy who clearly sells books to an aviator sunglasses-wearing guy who sells and buys whatever he wants.

With physical stores and delivery trucks, movies and Internet-connected cameras, a million workers, a cloud business that props up the CIA and enough paying subscribers to populate the ninth-largest country on Earth, Amazon and its founder occupy ever-greater space in American culture.

Bezos has shown up in Hollywood parties, on TMZ and gossip columns, especially after landing in a lascivious scandal involving an affair, intimate text messages and allegations of blackmail by a tabloid. In a power play, Bezos exposed the matter himself in a Medium post.

Bezos buying The Washington Post fueled public contempt from President Trump, who regularly tweets about "Jeff Bozo." Amazon, in turn, tried to call the president to testify in a lawsuit over a Pentagon contract. 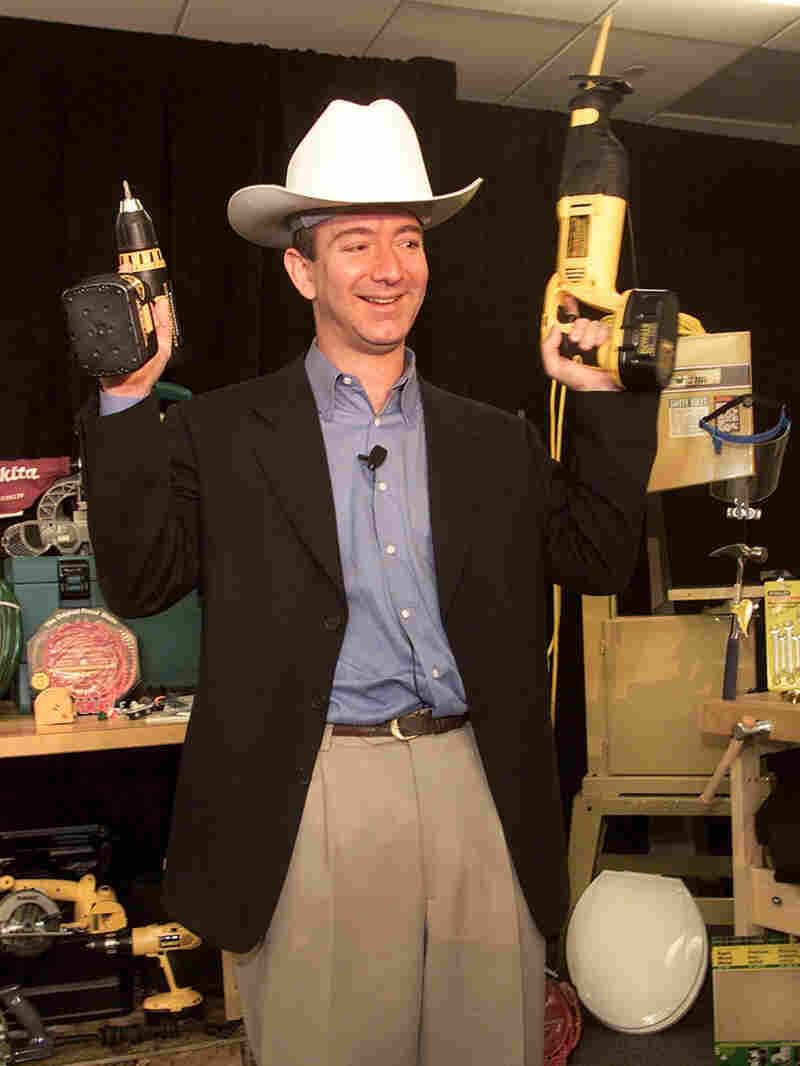 With Amazon expanding its selection, Bezos poses with a power drill and reciprocating saw in a Western-style hard hat at a 1999 news conference in New York. Richard Drew/AP hide caption 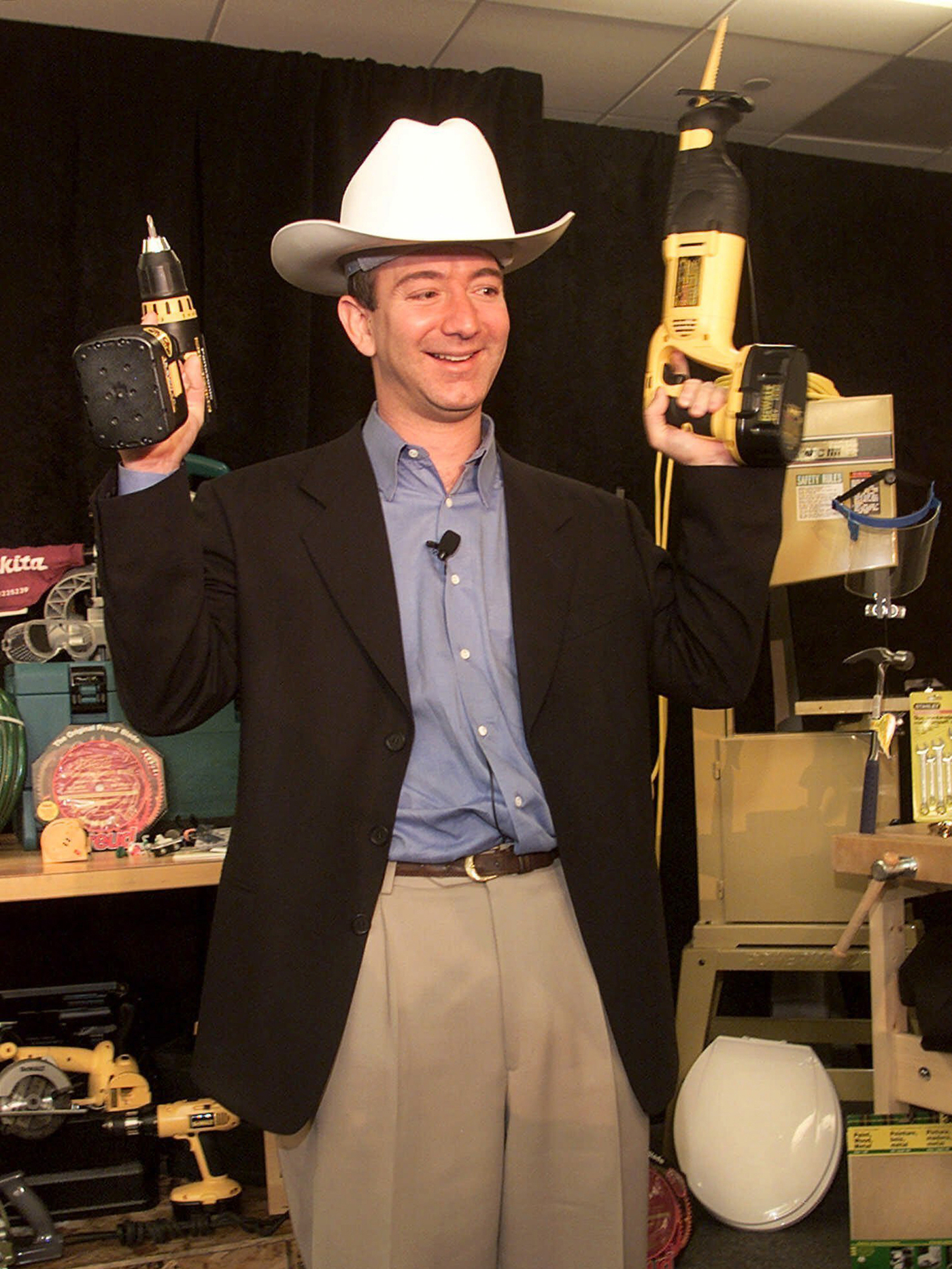 With Amazon expanding its selection, Bezos poses with a power drill and reciprocating saw in a Western-style hard hat at a 1999 news conference in New York.

Perhaps the company's ultimate corporate flex was Amazon HQ2 — a mundane search for a second headquarters that turned into a nationwide spectacle.

Scrutiny has started to catch up to the legend of Bezos: a Wall Street wunderkind who built a vast digital book catalog unburdened by sales tax, then trained shoppers to expect deliveries in two days — obsessed with finding inefficiencies that can turn into profits.

"He's singularly focused in a way that very few of the business people that I've interviewed over the years could possibly be," Bayers says.

In his first appearance before Congress, Bezos will face questions in an antitrust probe by the House Judiciary Committee, focused on Amazon's dual role as the operator of a top online marketplace as well as a merchant on the same platform.

Lawmakers want to know, for example, whether Amazon exploits data it collects from other sellers for its own benefit, or whether it undercuts competitors by charging lower prices at a loss or in other ways. The retailer has long rejected those and other accusations of anti-competitive behavior.

And Amazon is a hugely popular company — which has strengthened one of its key defenses in the face of regulatory scrutiny. U.S. competition law is centered around consumer harm, and Amazon's consumers love its cheap prices and convenience. 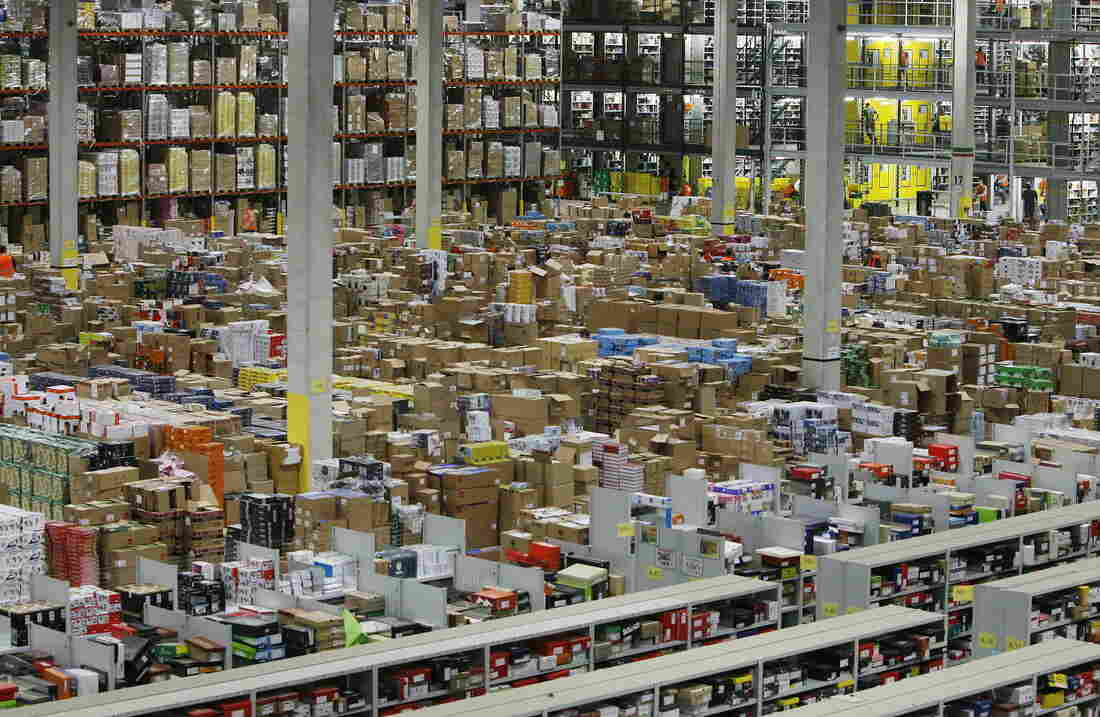 Workers hustle in one of Amazon's warehouses, in Leipzig, Germany, ahead of the 2009 holiday shopping season. Sebastian Willnow/DDP/AFP/Getty Images hide caption 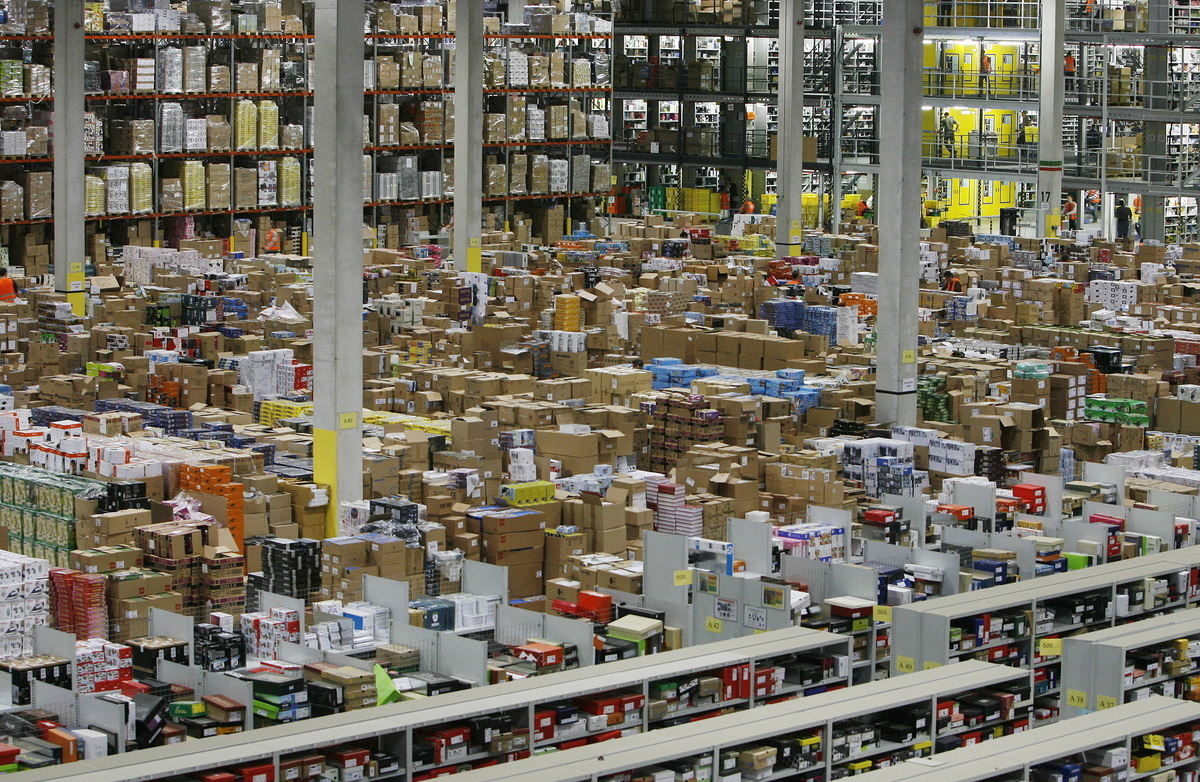 Workers hustle in one of Amazon's warehouses, in Leipzig, Germany, ahead of the 2009 holiday shopping season.

"All big institutions of any kind are going to be — and should be — examined, scrutinized and inspected," Bezos told an audience of Washington elites in 2018. "It's actually healthy, it's good, we want to live in a society where people are worried about big institutions."

Under any regulatory regime, people will want low prices, big selection and fast delivery, he continued. "We are so inventive that whatever regulations are promulgated ... that will not stop us from serving customers."

He perched on the ballroom stage that usually hosts the White House Correspondents' Dinner a transformed leader of a much-transformed Amazon — with a talent to appear self-deprecating, direct but also, still, unfazed by skeptics.