Accessibility links
Navajo Nation Sees Farming Renaissance During Coronavirus Pandemic The Navajo Nation is having a farming renaissance in the era of COVID-19. More residents are turning to traditional agriculture as they're under strict travel limits due to the coronavirus. 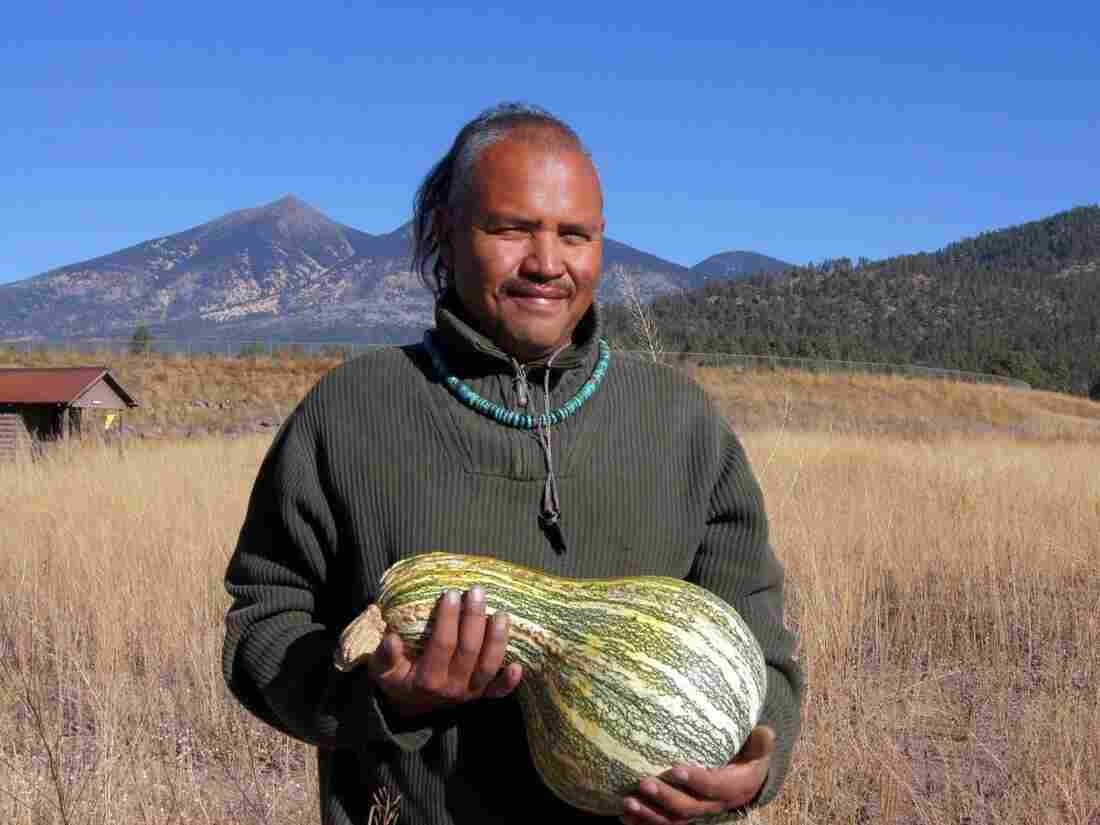 Since COVID-19 has much of the Navajo Nation stuck at home, farmer Tyrone Thompson says it's the perfect time for them to return to their agricultural roots. Tommy Greyeyes /Courtesy Hundred Storms Creative hide caption 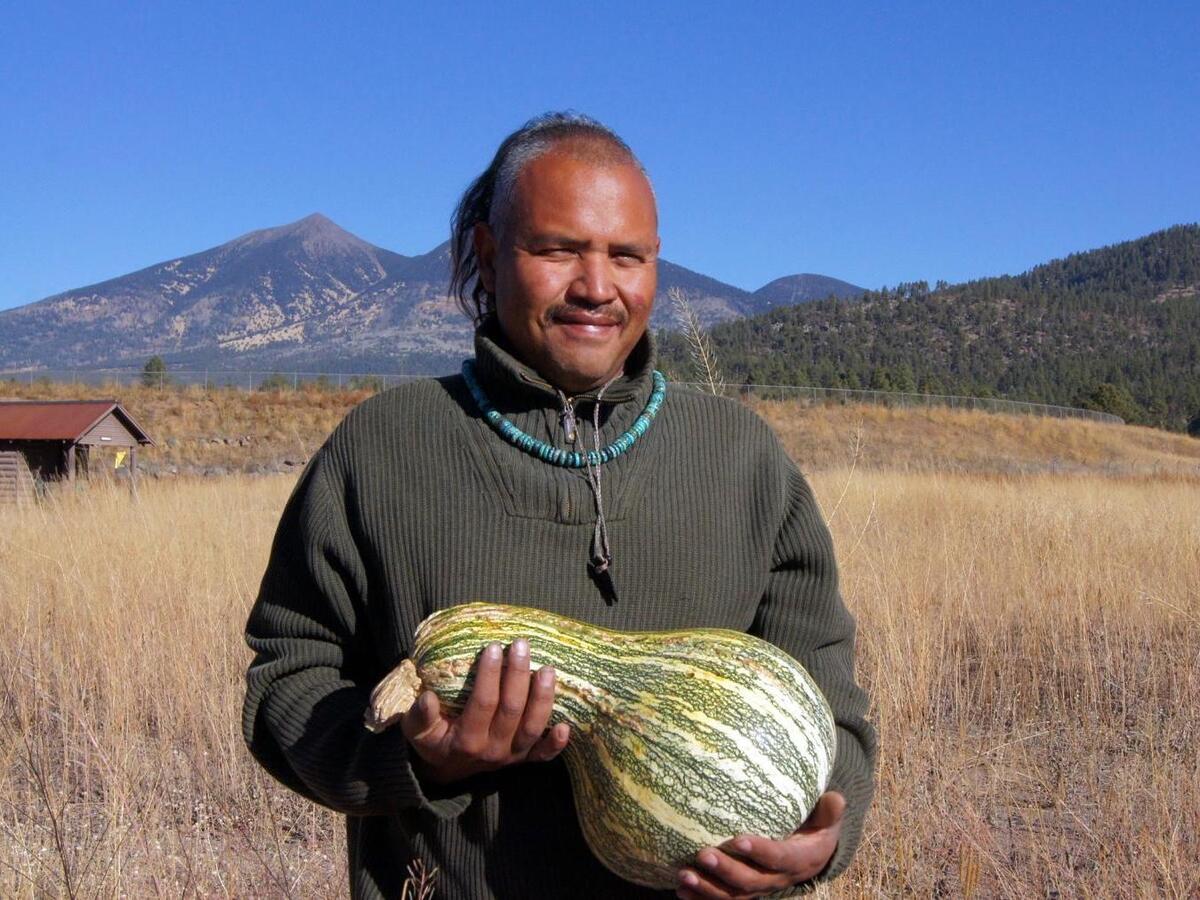 Since COVID-19 has much of the Navajo Nation stuck at home, farmer Tyrone Thompson says it's the perfect time for them to return to their agricultural roots.

Historically Navajos have lived off the land. But decades of assimilation, forced relocation and dependence on federal food distribution programs changed that.

Navajo farmer Tyrone Thompson is on a mission to help people return to their roots. He's even taken to social media to teach traditional farming techniques.

In a recent video he demonstrates how to layer organic matter to turn dry clay into rich fertile soil.

The U.S. Department of Agriculture calls the Navajo Nation a food desert. People travel up to 40 miles to get their groceries. But Thompson says they don't have to.

"As we see the shelves emptying of food and toilet paper we kind of reconnect to our roots," Thompson says. "Some of the tools that were given by our elders and our ancestors — our planting stick and our steering sticks — those are our weapons against hunger and poverty and sickness."

The Navajo Nation has gone from having the highest coronavirus infection rate in the country to a steady decline in cases. Tribal leaders are discouraging members from travel to surrounding states where numbers are spiking. Now, researcher Brandon Francis says more people are staying home and farming.

"There has been a surge in interest," Francis says. "Seeds were hard to come by. They flew off the shelves just as fast as toilet paper did."

This renewed interest in agriculture comes five years after many people on the reservation abandoned farming. They quit when an EPA crew investigating a mine in Colorado accidentally unleashed 3 million gallons of metal-contaminated waste into the southwest river system. Photos of the yellow river went viral.

"It's shocking and it shocked people worldwide," Francis says.

The town of Shiprock, which was the most affected, is named for a giant rock formation that appears to be sailing across the desert. Many people there don't have running water. So when the Gold King Mine dumped into its main water source, Shiprock Chapter president Duane "Chili" Yazzie says people were devastated.

"The mine spill certainly had a very significant impact on our lives, our mental emotional spiritual health," Yazzie says.

Water plays a critical role in Navajo ceremonies. So when people saw the yellow sludge flow past their farms, Yazzie says they weren't sure what would become of their prayers, their livelihoods or their families.

"We as indigenous people continue to recognize that the spiritual and the physical aspects of our life are one and the same," Yazzie says.

Researchers have studied the impacts of the leaks and surges on crops downstream and they say there are occasional spikes in metals like lead and arsenic. But they say residents would have to eat 40 servings a day over several days before getting sick.

But upstream in Colorado dozens of historic mines are still leaking and many of them could surge once again endangering farming on the Navajo Nation. It's an area called the Bonita Peak Mining District, which includes the Gold King Mine.

Peter Butler is the chairman of an advisory group that's working with the EPA to prevent another spill, like a nearby mine that's had two major blowouts in recent years.

"Nobody wants to go in there and find out what's going on because who knows the water could be backed up again," Butler says. "You're going back in there and if, of course, it releases, it's a death trap."

The EPA has recognized the seriousness of the spill and made it a super fund site. Ironically that's created even more red tape to remediate all of the hazardous mines. It's also raised the costs.

So Butler says the question becomes "how much are you willing to spend to try to reduce the risk of unplanned surges when they may or may not happen?"

But this costs may become more and more necessary. Downstream the Navajo are now counting on clean water from the river to irrigate their crops and become a self-sustaining nation during a pandemic.