Accessibility links
Trump Administration Refuses To Accept New DACA Applicants Despite Court Rulings The Trump administration will reject new applications while it undertakes a "comprehensive review" of DACA, a senior administration official said Tuesday during a call with reporters. 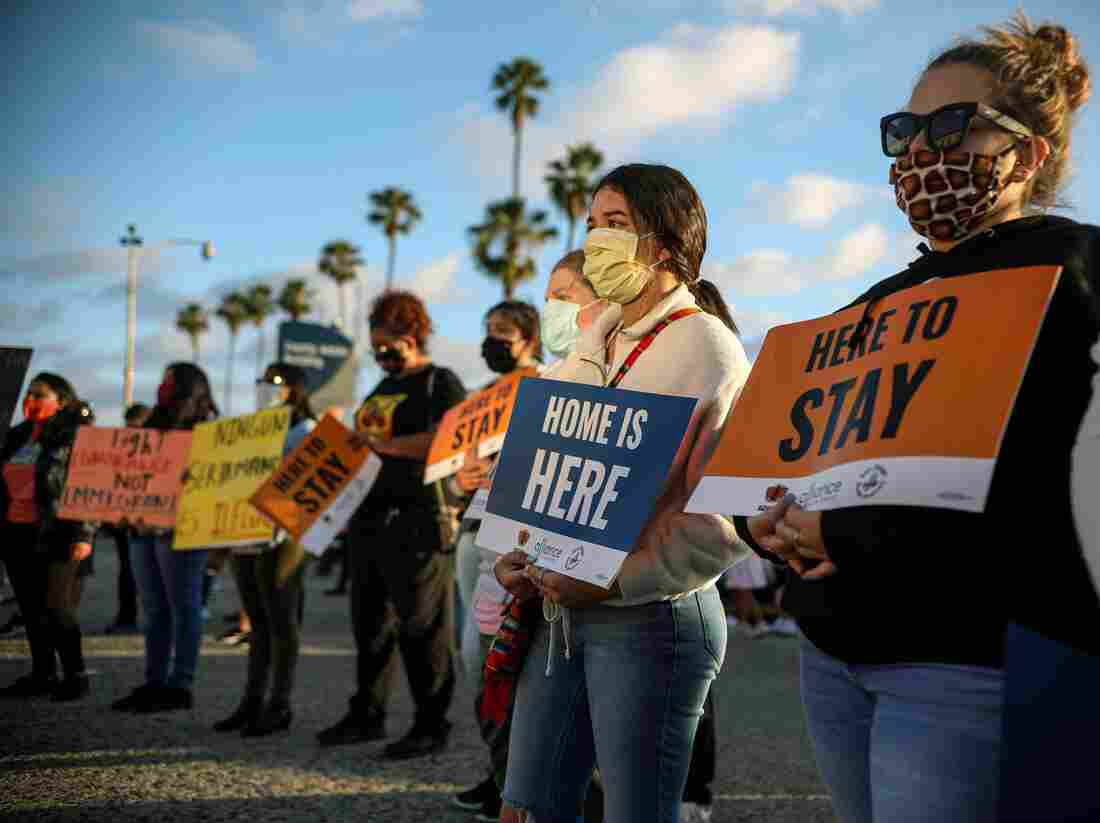 Protesters hold signs at a rally supporting the Supreme Court's ruling to uphold the DACA program on June 18. The Trump administration on Tuesday moved to continue its rollback of the program, despite court rulings. Sandy Huffaker/AFP via Getty Images hide caption 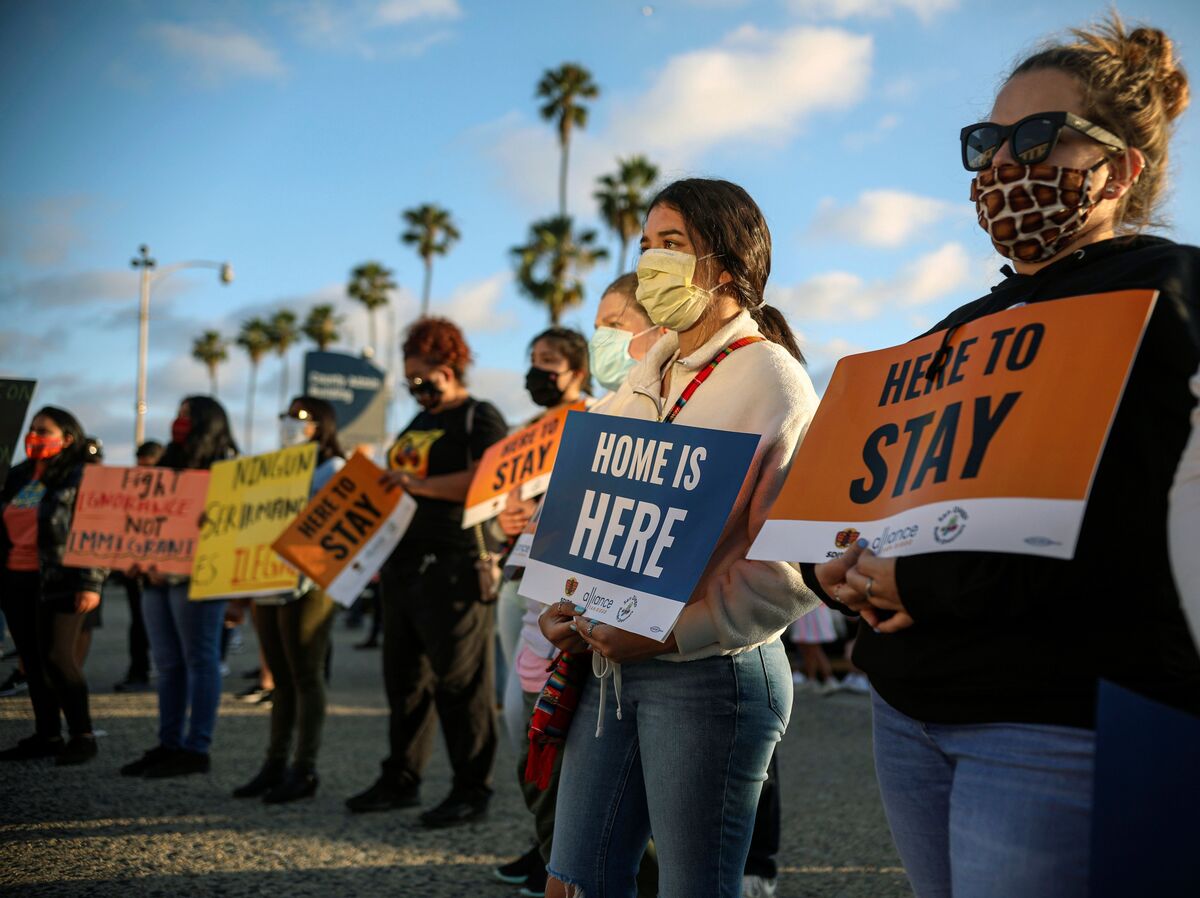 Protesters hold signs at a rally supporting the Supreme Court's ruling to uphold the DACA program on June 18. The Trump administration on Tuesday moved to continue its rollback of the program, despite court rulings.

The Trump administration on Tuesday continued its push to roll back DACA — the program that protects young immigrants brought to the country illegally as children — by refusing to accept new applicants.

A number of courts had given those immigrants hope. Last month, the Supreme Court blocked the administration's effort to end the program known as Deferred Action for Childhood Arrivals. Then two weeks ago, a court in Maryland told the administration to start accepting new DACA applicants.

But the administration is refusing to do that, saying it will reject new applicants while launching a "comprehensive review" of DACA and whether to go forward with a new plan to end the program.

"I have concluded that the DACA policy, at a minimum, presents serious policy concerns that may warrant its full rescission," said Acting Homeland Security Secretary Chad Wolf in a memo explaining the administration's decision.

According to that memo, the administration will continue to renew DACA protections for the roughly 640,000 immigrants who already have them — but only for one year, not for two years, as was previously the policy.

Immigrant advocates assailed the administration's move, saying it hurts DACA recipients and their families. The program protects recipients from deportation and allows them to work here legally.

"It is unconscionable for the Trump administration to circumvent the rulings of a federal court in order to once again thrust into uncertainty the families and communities who rely on DACA to stay together and for protection from unjust deportations," said Vanessa Esparza-Lopez, an attorney at the National Immigrant Justice Center in Chicago.

Immigrant advocates say it's clear that the administration is preparing to rescind the popular program again but postponing that until after the November election.

"Trump's announcement today lays the groundwork to kill the DACA program and confirms what we have long said: DACA is on the ballot in November," said Marielena Hincapié, executive director of the National Immigration Law Center in Los Angeles, which helped bring one of the cases the Supreme Court decided last month.

After that high court ruling, a federal judge in Maryland ordered the Trump administration to restore DACA to its status in September 2017, when the program was in full swing.

Still, the Trump administration continued to reject new applicants, despite growing calls to fully restart DACA from immigrants and their allies in Congress.

Ken Cuccinelli, a top immigration official at the Department of Homeland Security, defended the decision not to accept first-time DACA applications in an interview with NPR's Morning Edition.

"It is entirely within the legal authority of the Department of Homeland Security to do that and to set a system in place," Cuccinelli said. "And the system does not allow new applicants."

The White House also defended the decision not to accept new DACA applications on a call with reporters.

When asked how that decision could be reconciled with the Maryland court ruling, a senior administration official, who spoke on condition of anonymity, said the memo from Wolf is an "intervening action" that makes that decision moot.

When reporters asked whether the administration expects to face further litigation over the memo, the official said simply: "Yes, of course."

The Trump administration has long argued that DACA was created illegally by President Obama, but no court has ever reached a final conclusion on that question. A group of Republican state attorneys general, led by Ken Paxton of Texas, are making that same argument in a lawsuit still pending in federal court.

Immigration advocates are likely headed back to court as well. The group Make The Road New York, one of the plaintiffs in the Supreme Court case, is building a possible test case with a pair of brothers who filed first-time DACA applications this week. Once they are rejected, the plaintiffs are likely to go back to court to argue that the Trump administration is defying the Supreme Court's ruling.

Antonio Alarcon, a DACA recipient and activist with Make The Road New York, called today's move by the administration "an attack on me and my family."

"Our communities are paying close attention to this administration's attacks. And despite its attempt to distract and blame others we know where the blame lies," he said.