Accessibility links
Pending Postal Service Changes Could Delay Mail And Deliveries, Advocates Say Critics charge the new postmaster general intends to make the Postal Service more of a business than a service, which opponents say could cause disruptions for customers. 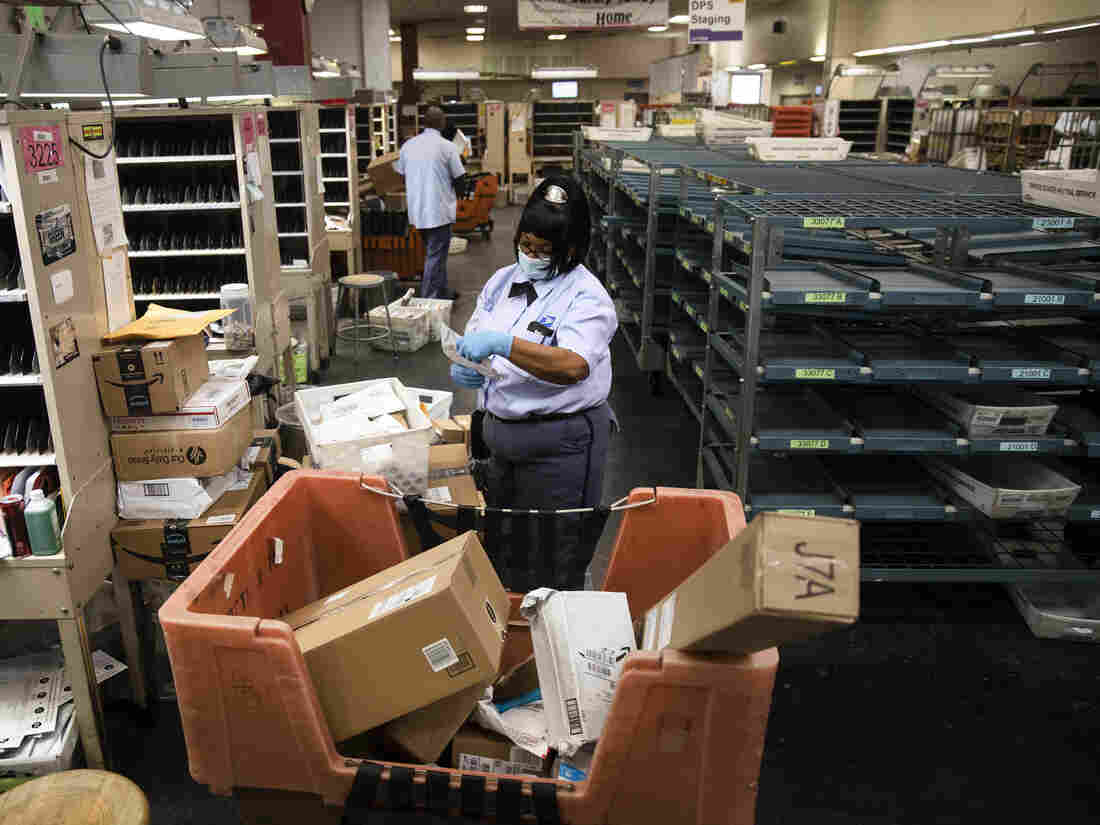 Letter carrier Henrietta Dixon, a nearly 30-year veteran, sorts mail to be delivered before she sets out on her route in Philadelphia in May. Changes within the U.S. Postal Service could make some deliveries late. Matt Rourke/AP hide caption 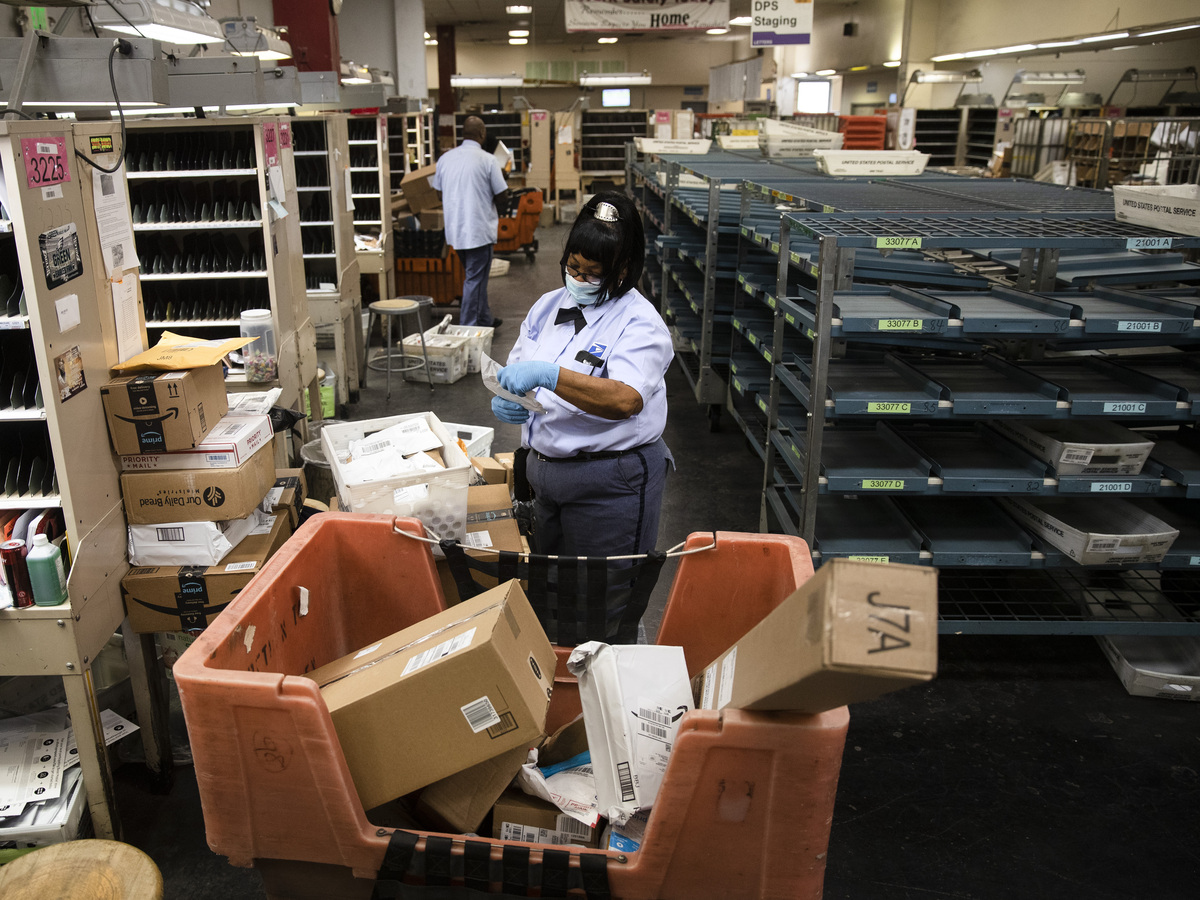 Letter carrier Henrietta Dixon, a nearly 30-year veteran, sorts mail to be delivered before she sets out on her route in Philadelphia in May. Changes within the U.S. Postal Service could make some deliveries late.

He talked of a "trajectory for success" and said that "we will focus on creating a viable operating model that ensures the Postal Service continues fulfilling its public service mission."

That message has since been followed by a number of directives and orders that prompt some to wonder just what DeJoy has in mind for the agency, which dates back to the nation's earliest days.

DeJoy, the nation's 75th postmaster general — a line that stretches back to Benjamin Franklin — is a major donor to President Trump and other Republicans. He previously headed a North Carolina-based logistics company.

Managers have told postal workers that under DeJoy, the post office is about to embark on what's been called a long-overdue "operational pivot." It means that among other things, late-arriving mail will now be left behind by carriers and delivered the next day. Overtime will be eliminated.

Those moves upset some workers, who take seriously the unofficial motto of the Postal Service that holds: "Neither snow nor rain nor heat nor gloom of night stays these couriers from the swift completion of their appointed rounds" — a phrase from the Greek historian Herodotus chiseled into the granite of New York City's general post office.

"There seems to be a sea change here," says Philip Rubio, a history professor at North Carolina A&T State University and a former letter carrier. Rubio says DeJoy seems intent on making the Postal Service more of a business than a service. 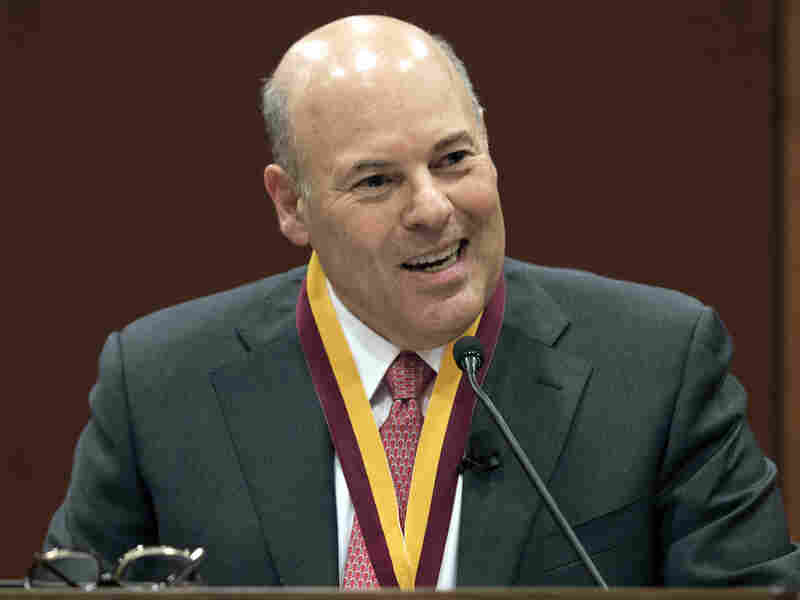 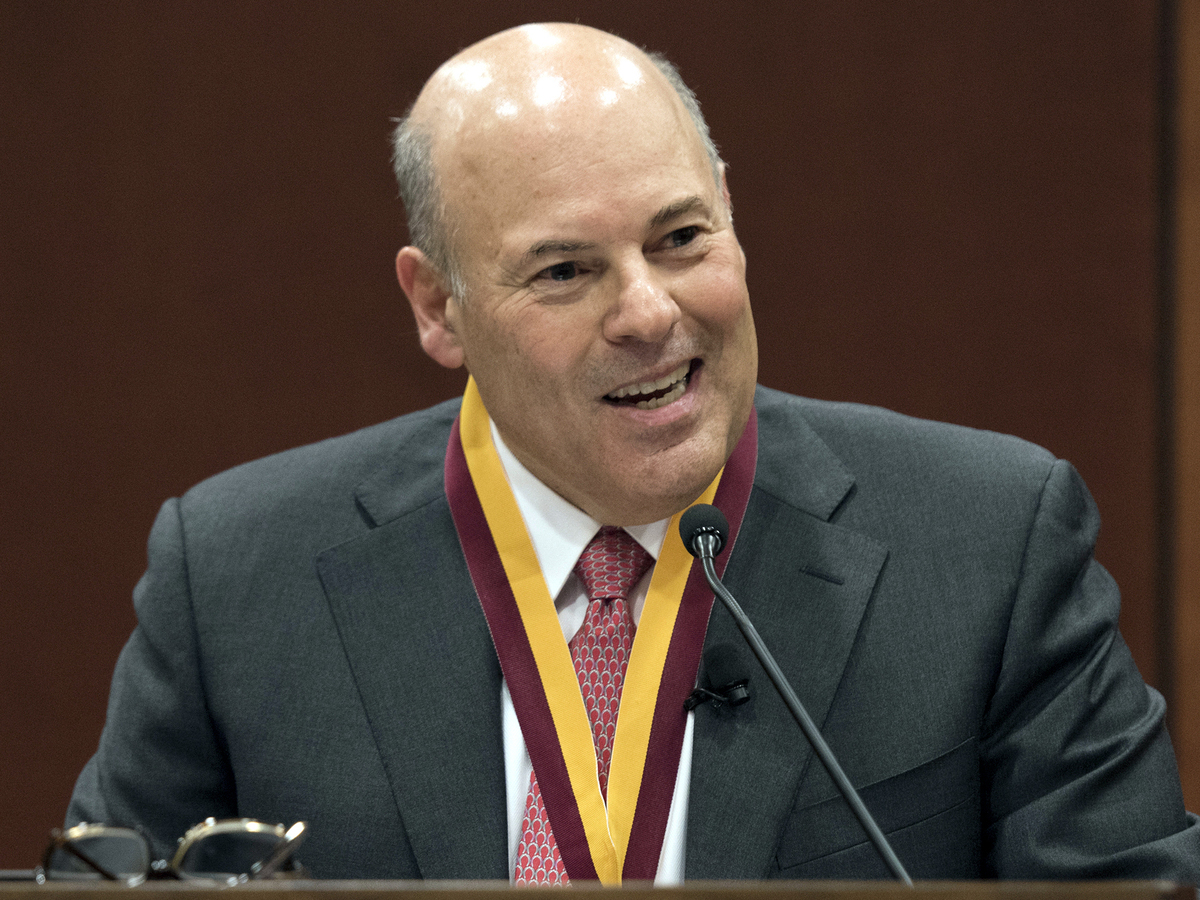 The Postal Service, which doesn't receive any tax dollars for its operating expenses, has longstanding financial issues.

It reported a loss of nearly $9 billion last year. Some of that is due to a congressional mandate that the post office prepay the health care costs of retirees. Some of it is due to a years-long decline in the volume of first-class mail.

The coronavirus pandemic has also meant a reduction in some mail. But it also meant an increase in package shipping as people shop online from their homes. That has postponed an imminent cash crisis the Postal Service had predicted might strike earlier this summer.

Trump has frequently criticized the Postal Service, charging that it gives favorable deals to online retailers such as Amazon, whose CEO, Jeff Bezos, also owns The Washington Post, another target of Trump's ire.

Actually, a government study found, e-commerce package deliveries are profitable for the Postal Service — although not sufficient to offset the decline in other types of mail.

Now, shippers who use the Postal Service aren't certain what the changes DeJoy is implementing will mean for their businesses.

Art Sackler is manager of the Coalition for a 21st Century Postal Service, a group of companies that rely on the post office, including Amazon, Hallmark and others.

"Having a potentially material change," Sackler says, "without any kind of consultation is a disappointment and hopefully was just, you know, a mistake or a mix-up."

Sackler says that "it looks as if what they're proposing has the potential to delay mail," and that the delayed mail will accumulate.

The unions representing Postal Service employees say they haven't met with DeJoy or been consulted about the changes either. 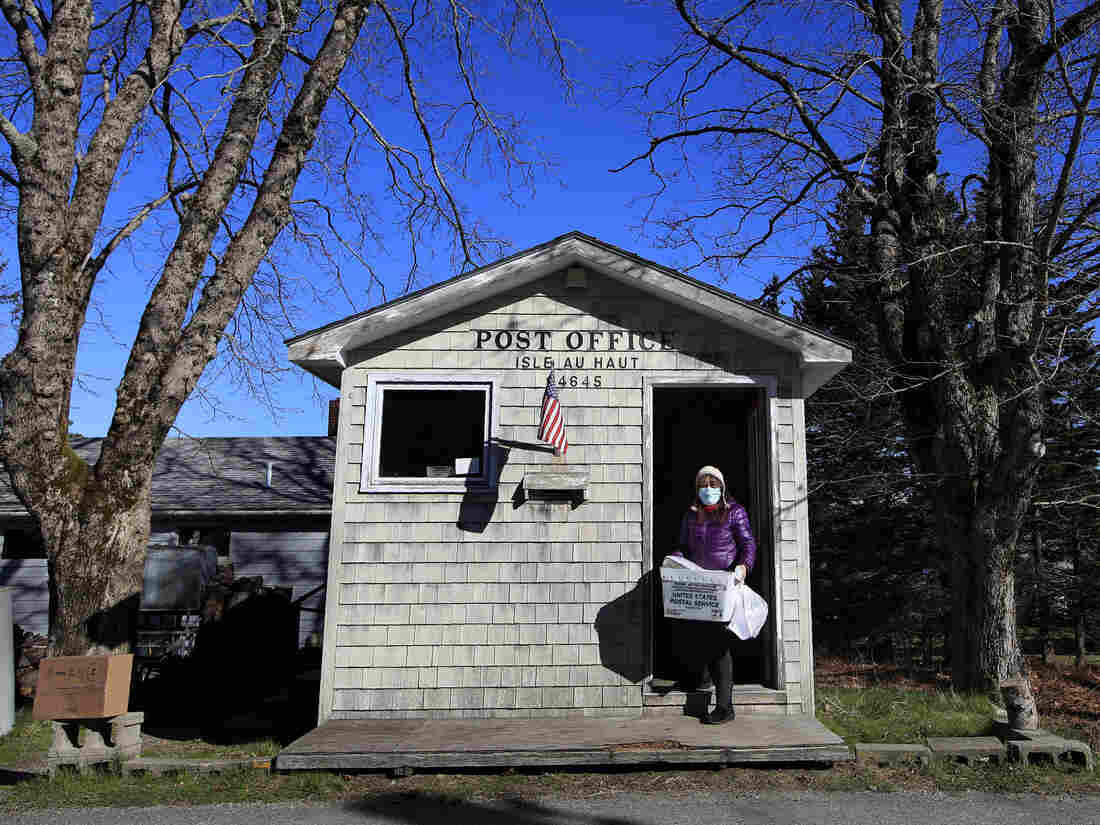 Donna DeWitt at work at the U.S. post office for Isle au Haut, Maine, where she serves about 70 customers. Advocates worry about losing the service in becoming a business. Robert F. Bukaty/AP hide caption 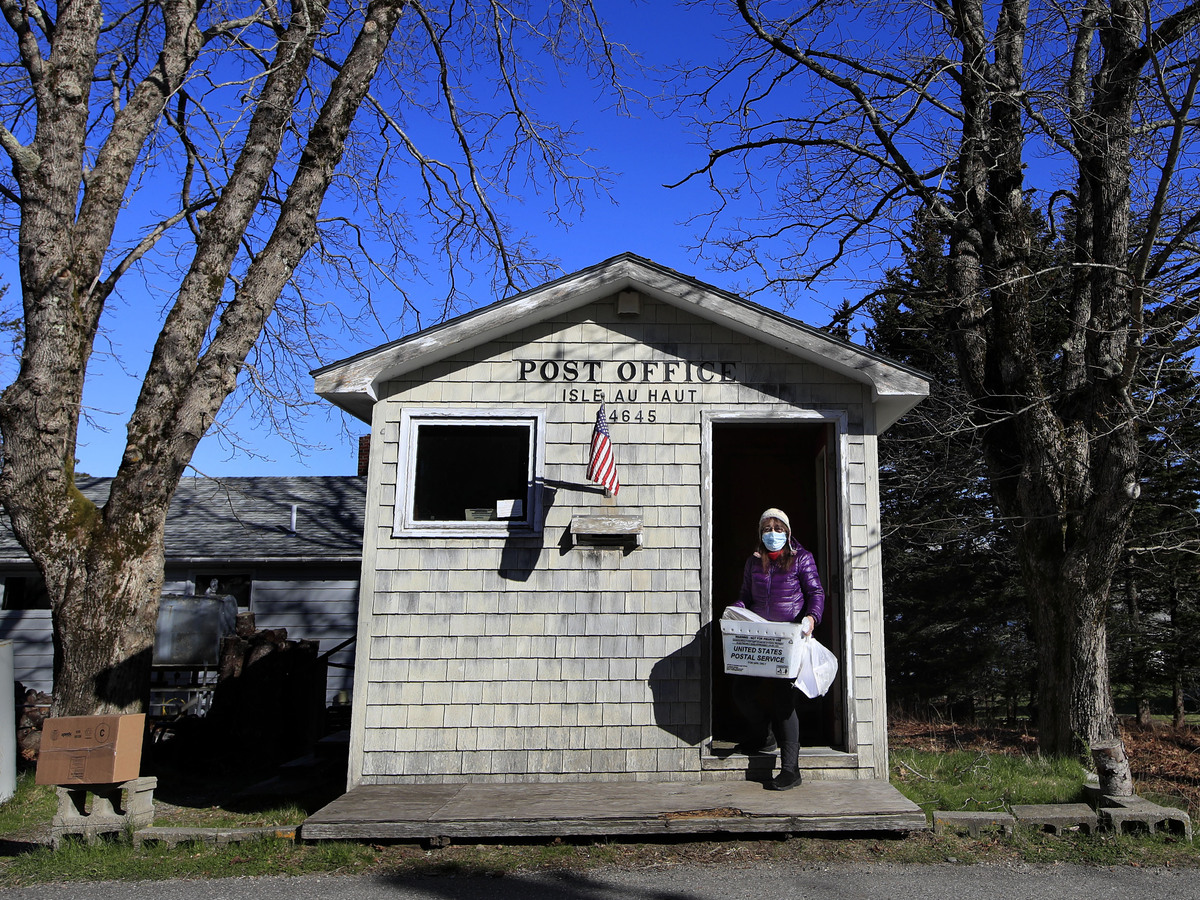 Donna DeWitt at work at the U.S. post office for Isle au Haut, Maine, where she serves about 70 customers. Advocates worry about losing the service in becoming a business.

Mark Dimondstein, president of the 200,000-member American Postal Workers Union, says the union is "absolutely opposed to any policies that just slow down the mail in the name of whatever the name is — cost cutting. In this case, it's about service. It's not the 'United States postal business.' It's the United States Postal Service."

Dimondstein says the changes could have real-world consequences, including, he says, delays in delivering medicine, census forms — and even mail-in ballots, adding the notion of leaving mail behind "runs counter to everything" postal workers believe.

One postal worker, who asked not to be identified because the person was not authorized to speak publicly, told NPR of a pharmaceutical company that had complained of delays in picking up its outgoing shipments.

"I am sick to my stomach," the worker said. "How can the United States Postal Service deny the pickup of outgoing mail for any customer — let alone a pharmaceutical company that is mailing medication?"

This worker said the Postal Service used to take pride that every piece of mail went out by the end of the day. Now, the worker says, that's changed, adding: "It's crazy."

For its part, the Postal Service says it is developing a business plan "to ensure that we will be financially stable and able to continue to provide dependable, affordable, safe and secure delivery of mail and packages to all Americans as a vital part of the nation's critical infrastructure."

In addition, the Postal Service says that "by running operations on time and on schedule, we will enhance our ability to be sustainable so that we can continue to provide high-quality, reasonably priced service to all people and businesses in the country."