Accessibility links
Remembering Fleetwood Mac's Peter Green, The Soulful Voice Of British Blues The guitarist and singer, whose distinctive guitar and soulful voice propelled the band's early success, died over the weekend at the age of 73. 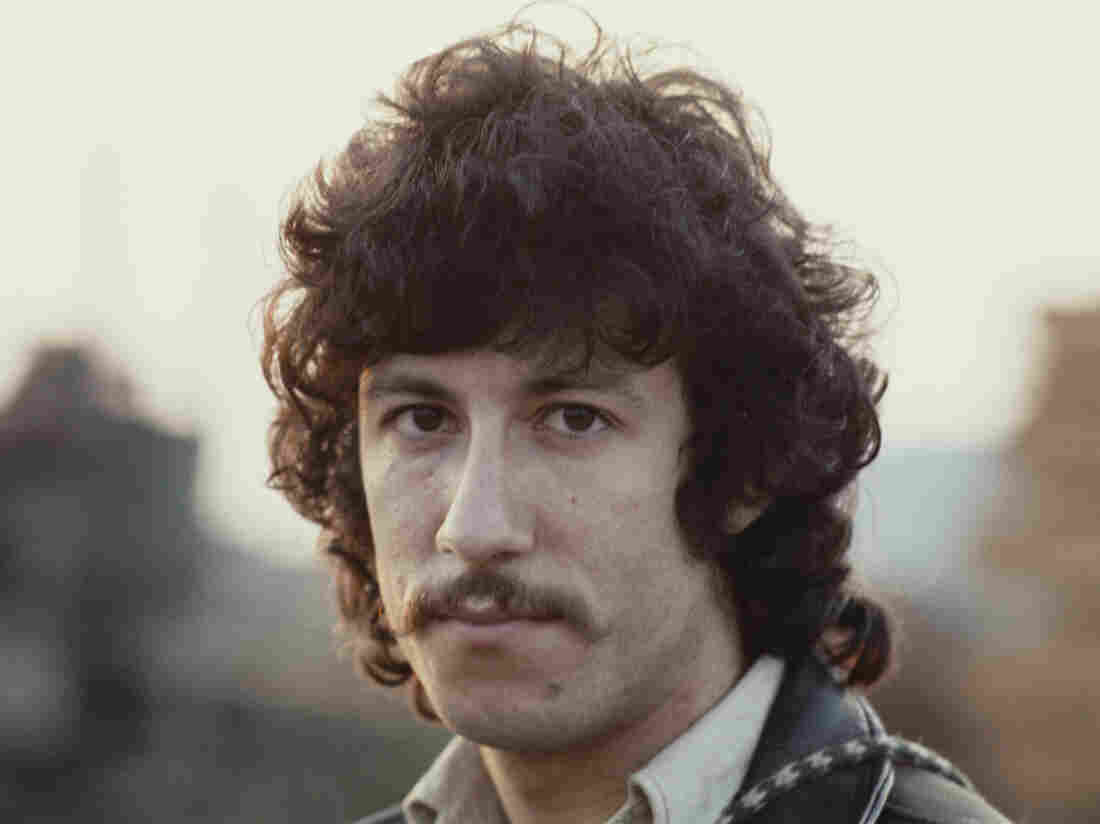 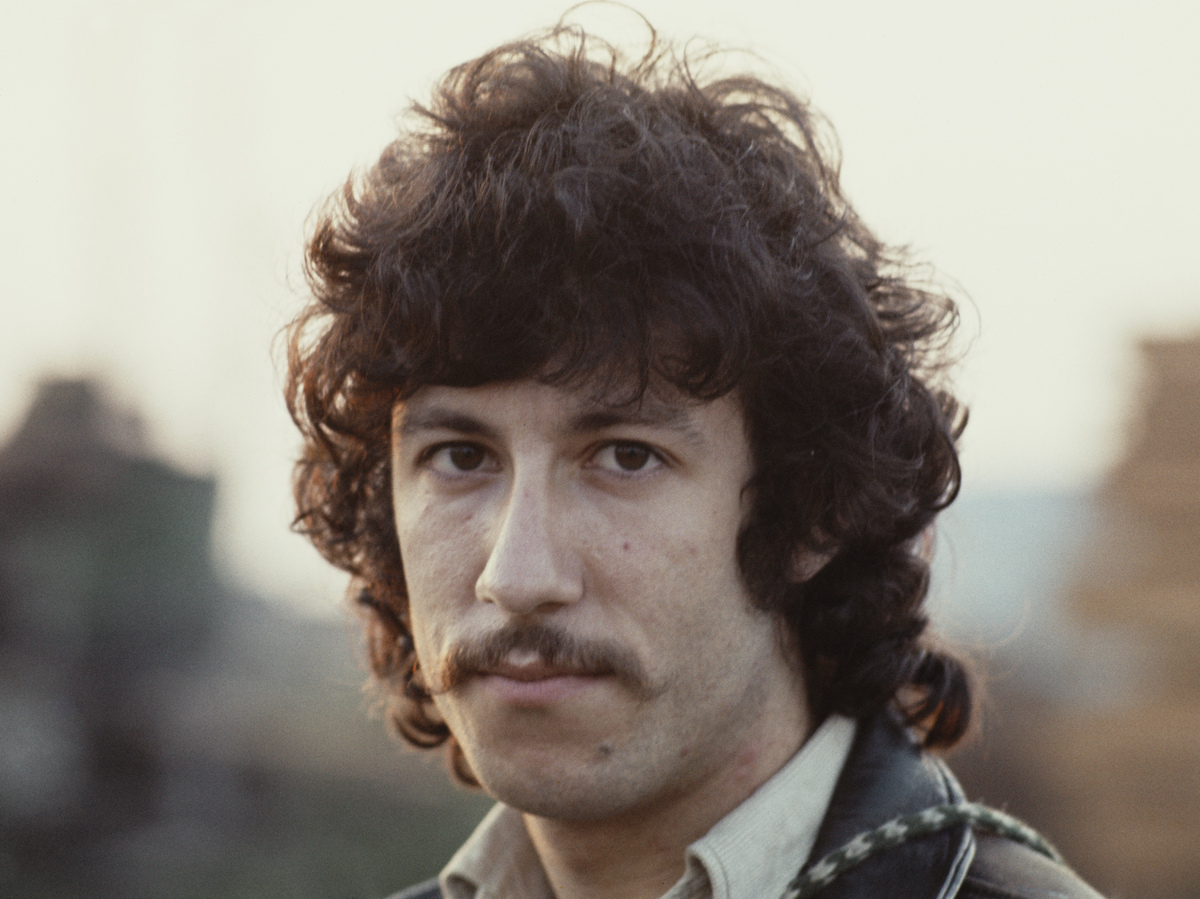 Everybody knows the name Fleetwood Mac — but few may know that the band's fame was built on the talents of a man who left the group after its third album and fell off the face of the Earth.

Peter Green died in his sleep July 25, at the age of 73. His warm voice and distinctive guitar playing propelled the first incarnation of Fleetwood Mac to stardom in the U.K. His best-known composition,"Black Magic Woman," barely cracked the charts there but stormed the Top 10 in the U.S. when Santana covered it. (To his credit, Carlos Santana always paid tribute to Green). And that's pretty much the story of Peter Green's Fleetwood Mac, as it was originally billed – stars at home in England, and an obscure blues band with a cult following in the U.S.

Which is a shame: Simply put, Peter Green was one of the most soulful British blues singers of his generation, and he was a guitar god. By the time he stepped into the spotlight, as lead guitarist for John Mayall's Bluesbreakers in the mid-'60s, graffiti describing his predecessor in that role was already dotting London buildings: "Clapton Is God." It didn't take Green very long to convince audiences that he, too, was worthy of the mantle — and for "Green God" to become a new tag.

But Green did not fancy being a guitar hero, as he told Martin Celmins for the authoritative biography, Peter Green: Founder of Fleetwood Mac. "I like to play slowly and feel every note," Green said. "It comes from every part of my body."

Peter Alan Greenbaum was born Oct. 29, 1946, at home in the Bethnal Green neighborhood of London's East End. His grandparents were Jewish immigrants from Poland and Ukraine. Fascism and anti-Semitism were on the rise in England as well as Germany in the years before WWII — thugs threw bricks and bottles through the windows of Jewish homes in the East End. After the war, Peter's father officially changed the family name to Green.

Peter started playing a hand-me-down guitar when he was 10 years old and wrote songs with his older brother, Michael, remaining completely self-taught. As a teenager Green was gigging, as a bassist, in local bands before moving on to lead guitar and eventually joining Mayall. But he was restless in the Bluesbreakers, and by 1967 he left to form his own band with drummer Mick Fleetwood, who'd been fired by Mayall.

Green named their new band Fleetwood Mac, and invited guitarist and singer Jeremy Spencer to join. Green told Celmins that he thought "Fleetwood" sounded "like an express train." But in the documentary, Man of the World: The Peter Green Story, Spencer recalls Green saying he expected one day to leave the band.

"They're my friends, what are they going to have? I'm going to leave them with the name."

"That's a perfect example of his lack of self," Mick Fleetwood says in the doc. "When we actually formed Fleetwood Mac, he chose that name and believe me, anyone and everyone around us [was] saying, 'It's gotta be Peter Green 'cause you're the dude.' He said, 'No, I wanna be in a band.' "

Despite that, the band's debut album was originally titled by its label Peter Green's Fleetwood Mac. But Green protested and it was eventually re-released as Fleetwood Mac, with bassist John McVie completing the lineup – lured away from the Bluesbreakers, Fleetwood speculates, in part because Green added "Mac" to the name.

The album spent a year on the U.K. charts. The following year, the band released a single that became its only No. 1 hit at home – the instrumental, "Albatross." The Green composition, inspired by Santo and Johnny's 1959 hit "Sleepwalk," has a bluesy Hawaiian feel and marked a departure from what the band's fans had come to expect over the course of two albums and raucous live performances.

The tune marked a departure in another way: the addition of a third front-line guitarist, 18-year-old Danny Kirwan, whose energy brought new ideas to the band and helped create its third, and best, album, Then Play On.

It was Green's realization of a vision he'd apparently had for a while – to take the blues in a new direction. He recognized the contradictions and appropriations involved in being a white Brit playing Black American music. As he told Martin Celmins in his biography: "Those Black guys knew that you can't get the hang of it. They knew that whatever a white guy tries to do is not gonna be the blues of coloured people. It's a pose all along. In Chicago that time [on the 1969 Fleetwood Mac "Blues Jam at Chess" sessions], I played too forcefully – too much and too loud – because my experience in life didn't match up to theirs."

But several Black blues musicians thought Green did have "the hang of it." B.B. King even wrote, in the forward to Celmins' book: "People have told me that in his early years my guitar playing influenced Peter a lot. Now that's something I take as a great compliment, but I have to tell you that I don't get it myself. When I hear Peter Green, I hear Peter Green."

What you hear is a plaintive wishing for happiness, a voice aching with loneliness alongside a stinging guitar. You can hear all of that on Then Play On; though Danny Kirwan composed half of the songs, it was very much Green's project. He played many of the parts himself, and bits of the free improvisations he was encouraging the band to explore are interspersed with the songs.

Green was searching for something, Celmins told NPR in 2013. "He found himself in a band where the rest of them were a bunch of lads who were having a great time, you know, playing music live and making records. And I think that Peter kind of went on a spiritual journey, the beginnings of which are very evident in Then Play On."

The roots of that spirituality were already evident by the time Green formed Fleetwood Mac, as his girlfriend at the time, Sandra Elsdon, points out in Celmins' biography.

"Peter's music was an expression of his emotional and spiritual being. He's a deeply spiritual person and that was his main driving force – to express that spirituality. He wasn't out to be famous, and the responsibility of the power that goes along with that kind of position was not something he wanted."

Want it or not, Green was a rock star, saddled with all of the trappings that go with it. He was also in his early 20s and living with his parents. The contrast between that and the limousines and glitz must have been confusing. Green seemed to withdraw. The band had toured the U.S. the year before and had tried LSD in San Francisco — perhaps Green found in the drug escape from the chaotic world around him and he continued to experiment with halucinogens.

Green grew a beard and his hair out, and started wearing white robes. After the band finished Then Play On, the musicians recorded what many have called Green's masterpiece, "Oh Well." The song is in two parts. The second verse of the first section reads:

Now, when I talk to God, I know he'd understand.

He said, "Stick by me and I'll be your guiding hand.

But don't ask me what I think of you.

I might not give the answer that you want me to."

It went to No. 2 on the U.K. charts — Green left the band eight months later. He'd become thoroughly disillusioned with the music business, saying he didn't deserve the fame and that he wanted to give his money to charity, something he actually did later on, leaving him broke until the next royalty check came in.

Martin Celmins told NPR that Green was not an acid casualty. "The influence of drugs didn't help, but I think it's been exaggerated. I think there were far more musical, lifestyle reasons why he no longer wanted to be a member of a world-beating rock-and-roll band."

Green released an album of his own in 1970, called The End of the Game. It's comprised of jams with four other musicians and includes some of his fiercest guitar playing. He kept playing music off and on, but his behavior became more erratic. After smashing furniture at his parents house around 1974, they had him hospitalized, and he was eventually diagnosed with schizophrenia. He was heavily medicated and underwent electroshock treatments. He was homeless for a time.

Green slowly started to recover in the mid '70s, got married and, in 1979, released a comeback album, In The Skies. He made a few more albums and toured and recorded with a band called Kolors in the mid-'80s, before drifting off again.

He lived alone for a while before moving in with his older brother, Len, and his wife in the mid-'90s. This is when Martin Celmins, who'd already begun work on his biography, convinced Green to stop taking the medications that left him like a zombie. Celmins' biography was published in '95, the same year Irish guitarist Gary Moore released a tribute album, Blues for Greeny. And Peter Green made another comeback.

He formed the Splinter Group with guitarist Nigel Watson in the mid-'90s. It eventually splintered in 2003 and Green went on to form Peter Green and Friends, which toured Europe until 2010 when Green tired of the grueling life on the road and gave up performing.

He still played music at home and with friends and remained interested in music until the end, particularly says Celmins, acoustic music. He took up fishing and painting and collected antique rods and guitars.

In the documentary, Man of the World, Green is obviously damaged but he seems happy. He smiles while listening to his old recordings. You want to believe that he'd finally beaten back the nagging uncertainties that dogged him most of his life. That he'd finally come to terms with who he was.