Accessibility links
Bloomberg Vowed To Spend Whatever It Takes To Beat Trump. Democrats Are Still Waiting Mike Bloomberg has already spent well over $350 million for Democrats this cycle, according to his team. Some Democrats say the former New York mayor and presidential candidate could do more.

Listen · 4:15 4:15
Bloomberg Vowed To Spend Whatever It Takes To Beat Trump. Democrats Are Still Waiting 4:15 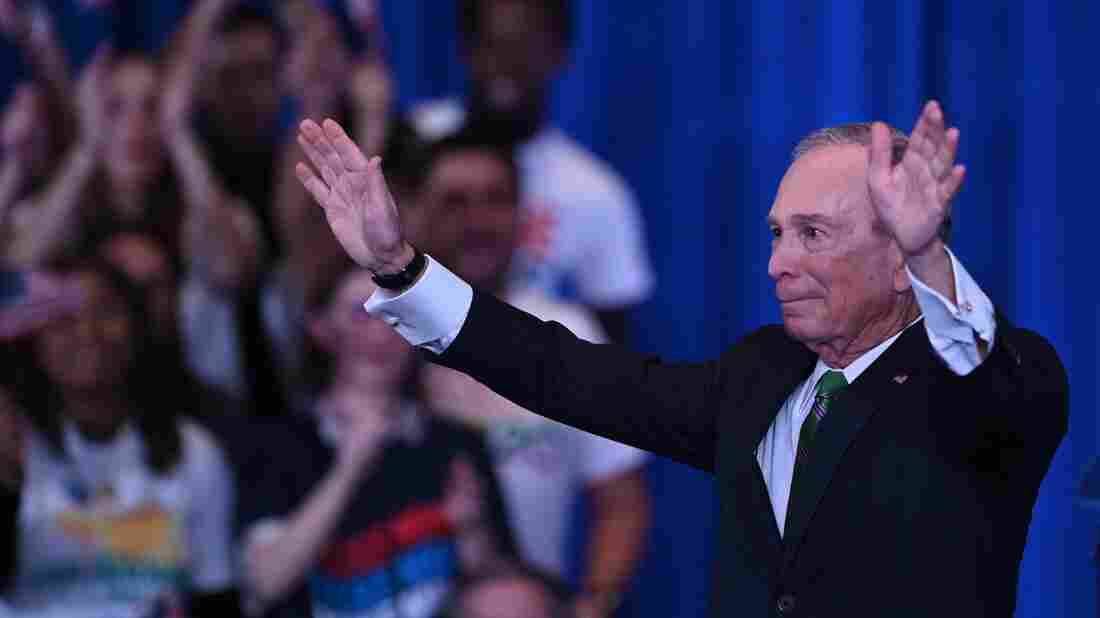 Mike Bloomberg, seen here speaking to supporters and staff in March in New York City, spent $1 billion of his own fortune to run for president but exited the race early on. Johannes Eisele/AFP via Getty Images hide caption 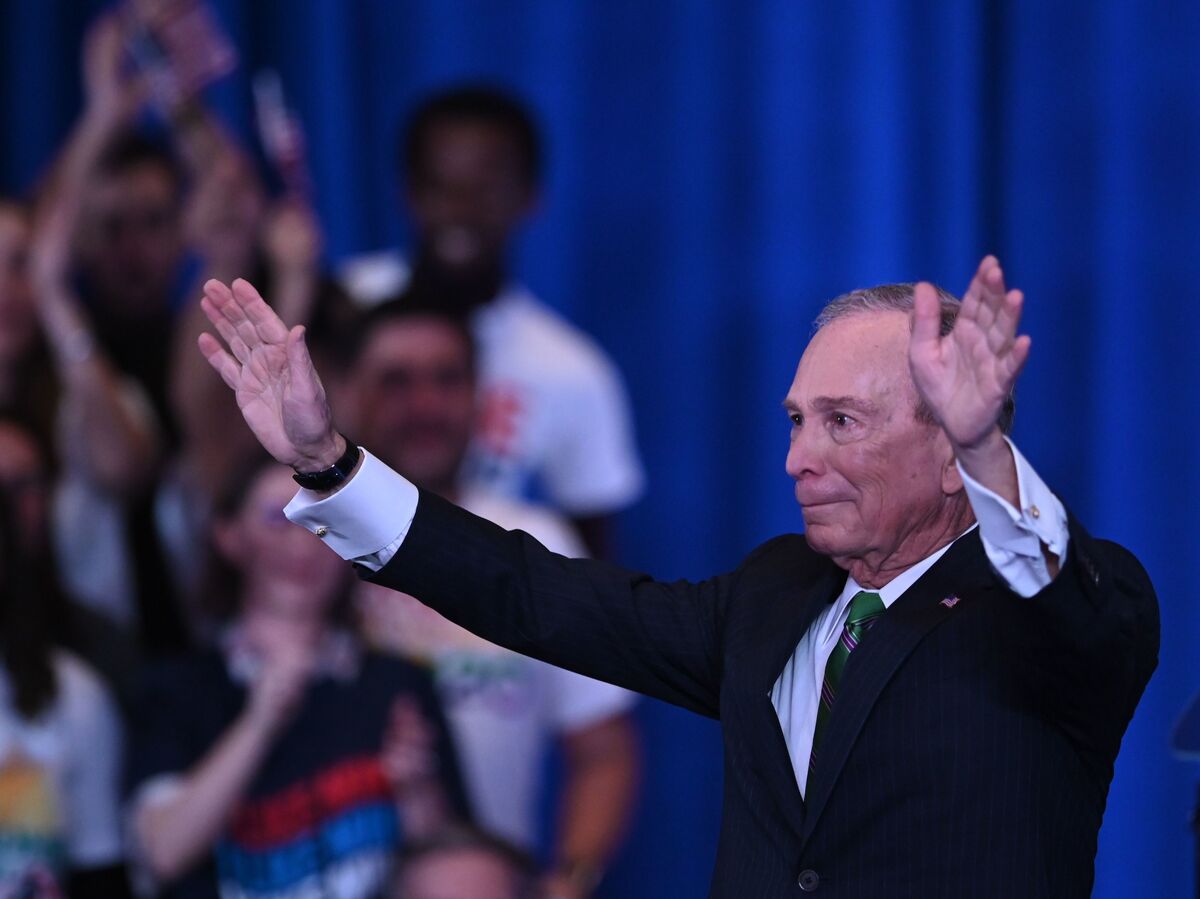 Mike Bloomberg, seen here speaking to supporters and staff in March in New York City, spent $1 billion of his own fortune to run for president but exited the race early on.

When a billionaire with a history of investing generously and strategically in campaigns promised to spend whatever it takes to defeat President Trump, it made Democrats sit up and take notice.

And how did they interpret that pledge from former New York Mayor Mike Bloomberg?

"It meant spending about a billion dollars," said Jim Messina, who ran President Barack Obama's 2012 reelection campaign. "It meant making sure that Donald Trump did not have the typical incumbent advantage on finance, and it meant helping us catch up in a couple places where Trump was well ahead of us, which was digital and data."

It is the most ambitious campaign promise ever made by someone who isn't still running, and Bloomberg fully intends to fulfill it, according to former Philadelphia Mayor Michael Nutter, the national political chair of Bloomberg's short-lived primary campaign, in which the candidate spent $1 billion of his own fortune. But Nutter also says that "whatever it takes" can't be defined simply by a specific dollar amount; instead it's about how and where Bloomberg spends his money this year.

Bloomberg has already spent well over $350 million for Democrats this cycle, according to his team, including the following investments:

Altogether, it makes Bloomberg the single biggest donor to the Democrats this year, and it's having an impact on the ground, according to party strategists in battleground states.

North Carolina is one of those, and it has pretty much every political prize on the line in November with competitive contests for president, U.S. Senate, U.S. House seats, governor and control of the state Legislature, with redistricting looming next year.

"What the Bloomberg campaign did right was they put money into field organizing," said state Rep. Graig Meyer, who is in charge of fundraising and recruiting for Democratic Statehouse candidates. "And so that getting campaign operations up and running, building a volunteer base, setting up the structure for direct voter contact — all of that is happening because they made that investment through the DNC."

But to give Democrats in North Carolina a real advantage, Bloomberg could do a lot more, according to Meyer.

"In no way has the Bloomberg operation put direct money into down-ticket races besides through the overall coordinated effort [with the DNC]," he said, adding, "$30 or $50 million is probably the right amount that would be a completely transformative game changer. I imagine Bloomberg could afford to do $30 to $50 million in North Carolina if he wanted to."

The Democratic leader in the North Carolina House of Representatives was even tougher on Bloomberg.

Jackson said he doesn't know what Bloomberg's intentions are in North Carolina, but he adds, "I certainly hoped for help with the House caucus. We have such a once-in-a-decade opportunity. We need his help to take advantage of that. In whatever form he chooses."

In Georgia, Howard Franklin has similar expectations. He was a senior adviser in the state to Bloomberg's presidential campaign, and he is optimistic that Bloomberg will fulfill his pledge.

"I think he did set the bar high," Franklin said.

Georgia is another state with a lot at stake, as a longtime GOP stronghold that appears close at the presidential level, along with two U.S. Senate races due to a special election and competitive U.S. House races in the Atlanta suburbs. It's also felt the brunt of the two major crises of the year, the pandemic and unrest over racial justice.

There's a lot to invest in for Democrats to make the most of their opportunities in the state, according to Franklin: "I think eight figures gets you on the television in the media markets you care about. I think it puts boots on the ground. I think it gets you telephones and social media. And you know, again, with everything the country is going through and the attention that the city of Atlanta, in particular, has gotten, I just think that there isn't a better place to make the case for a more socially just and equitable approach to policing."

Bloomberg is getting pitches like that all day, every day.

Although there's no evidence yet that he is spending all that he promised, that doesn't mean Bloomberg can't or won't in the remaining days of the campaign, now fewer than 100.

Bloomberg has a history of coming in late and spending big. In 2018, he was the single biggest Democratic investor in House races, and the donations he made in September helped flip 21 red districts blue, out of 24 he invested in.

The remaining investments are "still being determined and decided and figured out" according to Nutter: "I mean, this is politics. You don't just kind of throw the money out the window and hope it lands in the right places. Mike makes strategic investments to change outcomes using data and evidence."

In the next month or so, Bloomberg's team says it will be clear how much and where he has decided to invest, and then Democrats can decide for themselves whether they think he's spending whatever it takes.