Accessibility links
Obama Delivers Eulogy At Funeral For Civil For Rights Legend John Lewis "He, as much as anyone in our history, brought this country a little bit closer to our highest ideals," former President Barack Obama said of the longtime congressman and civil rights legend. 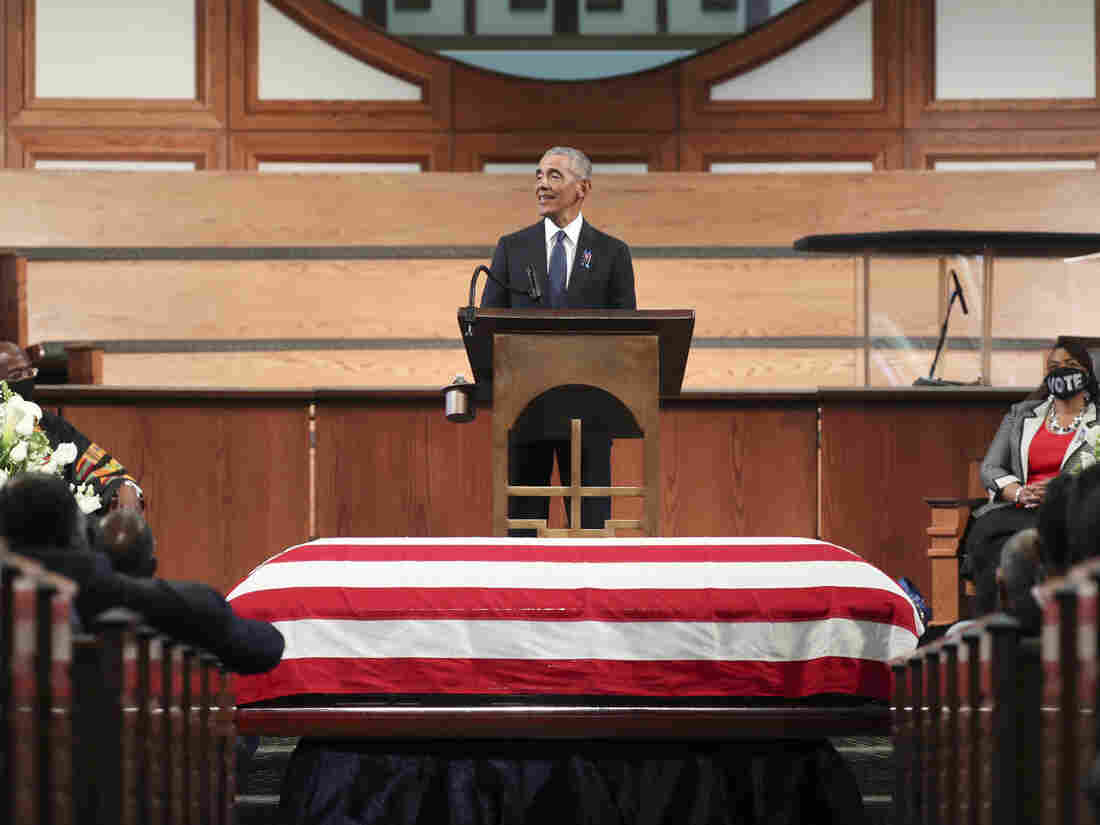 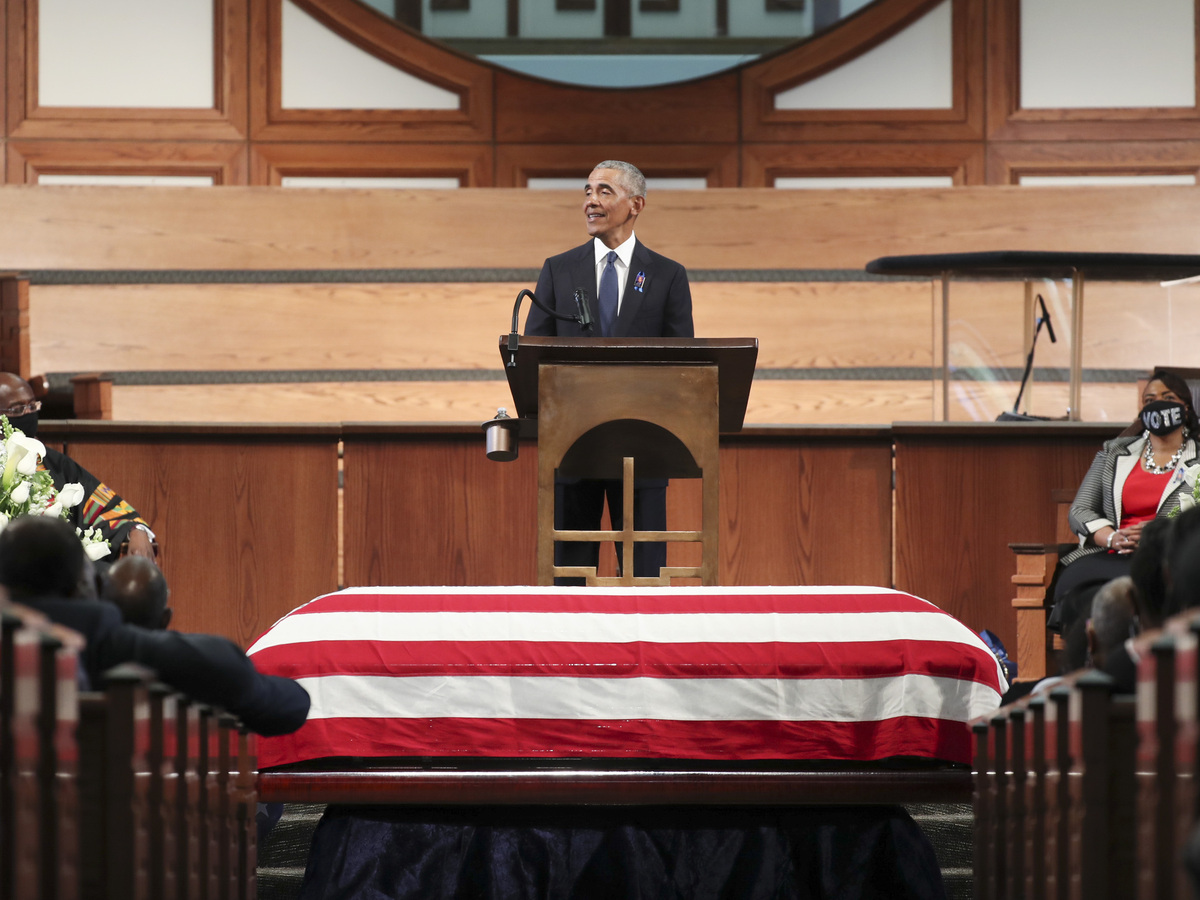 In his remarks, Obama issued a call to action for Americans to turn out to vote in the November election and linked Lewis' legacy to the modern-day civil rights movement sparked by the Memorial Day killing of George Floyd.

"Bull Conner may be gone, but today we witness with our own eyes police officers kneeling on the necks of Black Americans," Obama said from the pulpit of the historic Ebenezer Baptist Church, where the Rev. Martin Luther King Jr. once was co-pastor.

"George Wallace may be gone, but we can witness our federal government sending agents to use tear gas and batons against peaceful demonstrators," Obama continued. "We may no longer have to guess the number of jelly beans in a jar in order to cast a ballot, but even as we sit there, there are those in power who are doing their darndest to discourage people from voting."

Wallace and Connor were both Alabama politicians during the 1960s who fought against advancements in civil rights.

The funeral for Lewis, widely revered by his peers as "the conscience of the Congress," comes after days of ceremonies honoring him in his home state of Alabama, then in Washington, D.C., where he represented Atlanta and some of its suburbs for more than 30 years, then in Georgia.

Lewis died at age 80 on July 17 after battling pancreatic cancer.

Three former presidents — Obama, George W. Bush and Bill Clinton — were all in attendance. Another former president, Jimmy Carter, did not attend in person but sent condolences that were read aloud at the service.

President Trump did not attend the service. Earlier Thursday he floated the idea of delaying the November election, which he does not have the authority to do. Should the election be moved, that power, as laid out by the Constitution, would take an act of Congress.

"John, I'm here because of you"

Obama called Lewis a mentor and a friend. They first met while Obama was at Harvard Law School, and many years passed before the two men met again after Obama was elected to the U.S. Senate.

"He was one of the first people I greeted and hugged on that stand," Obama said. "And I told him, 'This is your day, too.' " 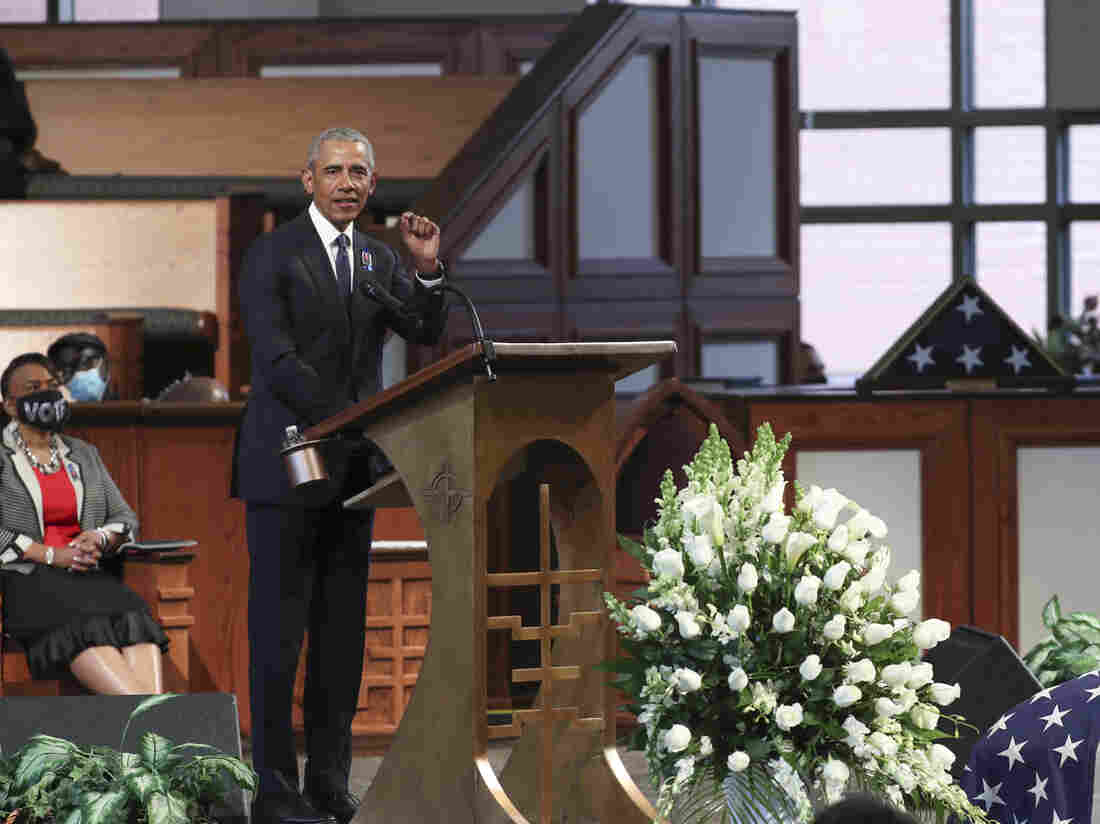 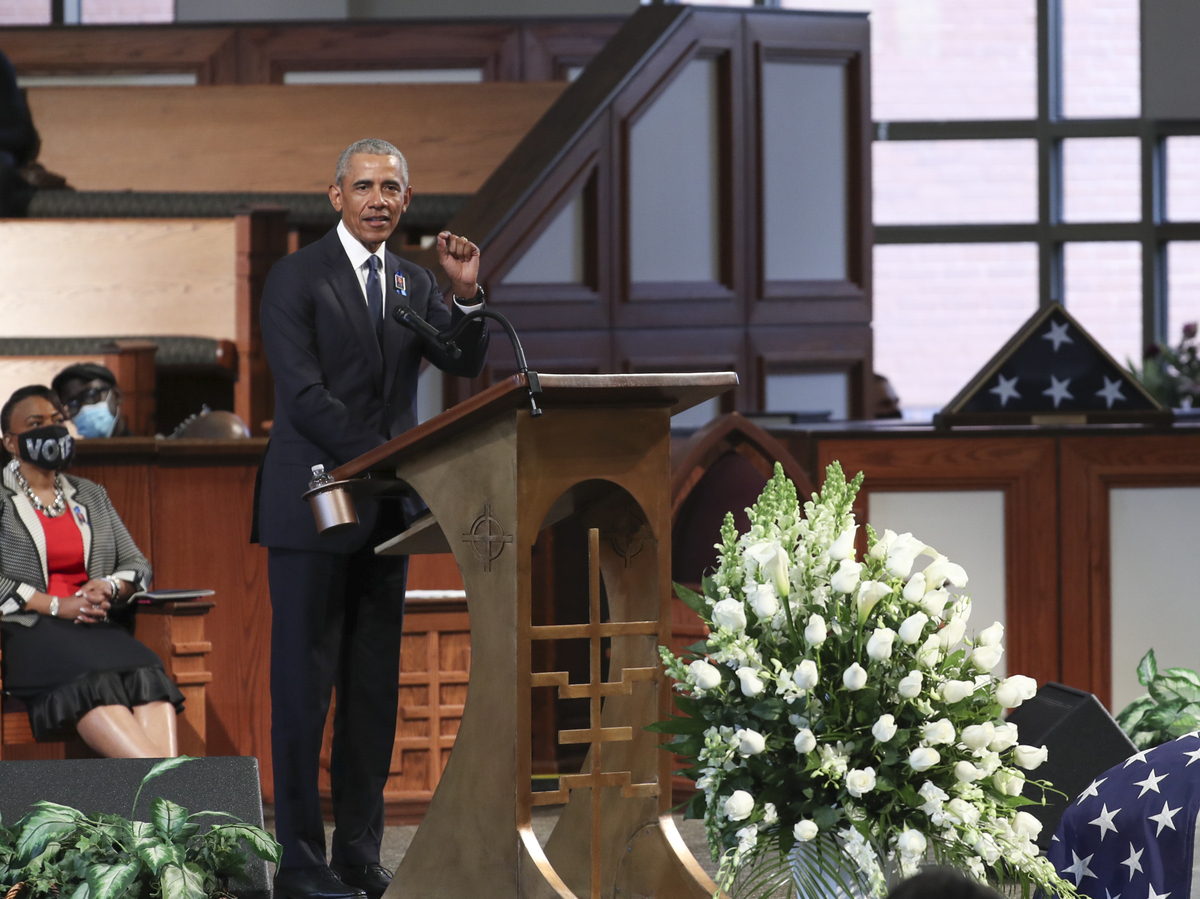 Obama delivers the eulogy during Lewis' funeral Thursday in Atlanta.

Lewis' life was "exceptional" in so many ways, Obama said.

"He, as much as anyone in our history, brought this country a little bit closer to our highest ideals," the former president said.

"And some day, when we do finish that long journey towards freedom, when we do form a more perfect union – whether it's years from now or decades or even if it takes another two centuries – John Lewis will be a founding father of that fuller, fairer, better America."

In a lighter moment during the service, Bush spoke of Lewis' humble beginnings in Troy, Ala., raising chickens on a small family farm. Bush said a young Lewis tended to them and preached to them.

"When his family claimed one for family supper, John refused to eat one of his flock," Bush said. "Going hungry was his first act of nonviolent protest," which drew laughter from the sanctuary.

Bush, a Republican, also described seeing Lewis' spark and passion firsthand. He recalled working with him to bring the National Museum of African American History and Culture to the National Mall in Washington. In 2008, Bush signed into law the Emmett Till Unsolved Civil Rights Crime Act, which Lewis co-sponsored.

"John and I had our disagreements, of course," Bush said. "But in the America John Lewis fought for and the America I believe in, differences of opinion are inevitable elements and evidence of democracy in action."

The Rev. Bernice King, King's youngest daughter, led a prayer during the service. She quoted her father, saying, "Death is not a period that ends this great sentence of life, but a comma which punctuates it to a lofty and higher significance."

She also thanked Lewis for being a champion in the fight for justice and equality.

"As we honor the life of this nonviolent warrior, who embodied the very spirit of Christ and showed us we have the spiritual power to resist injustice and evil and hatred and vitriol with the force of love and truth, we are eternally grateful," King said.

Nearly all the mourners at the church wore masks, and Warnock noted that the pandemic has made grieving for Lewis even more challenging.

"At a time where we would feel comfort in embracing one another, love compels us to socially distance from one another," said Warnock, who is running as a Democrat for one of Georgia's Senate seats in November. "But make no mistake: We are together in principle, even if not in proximity."

Singer Jennifer Holliday sang resounding renditions of "Only What You Do for Christ Will Last" and "Take My Hand, Precious Lord."

Photos: John Lewis 'Stood For Everyone'

Lewis in his own words

Lewis helped organize the 1963 March on Washington and was the last surviving speaker from the event.

On the day of his funeral, The New York Times published an opinion piece penned by the congressman shortly before his death.

Lewis said he was inspired by the Black Lives Matter movement and hopeful about the next chapter for America.

"Ordinary people with extraordinary vision can redeem the soul of America by getting in what I call good trouble, necessary trouble," Lewis wrote. "Voting and participating in the democratic process are key. The vote is the most powerful nonviolent change agent you have in a democratic society. You must use it because it is not guaranteed. You can lose it."

He explained, "That is why I had to visit Black Lives Matter Plaza in Washington, though I was admitted to the hospital the following day. I just had to see and feel it for myself that, after many years of silent witness, the truth is still marching on."

The visit in June to the renamed plaza in Washington was his final public appearance. 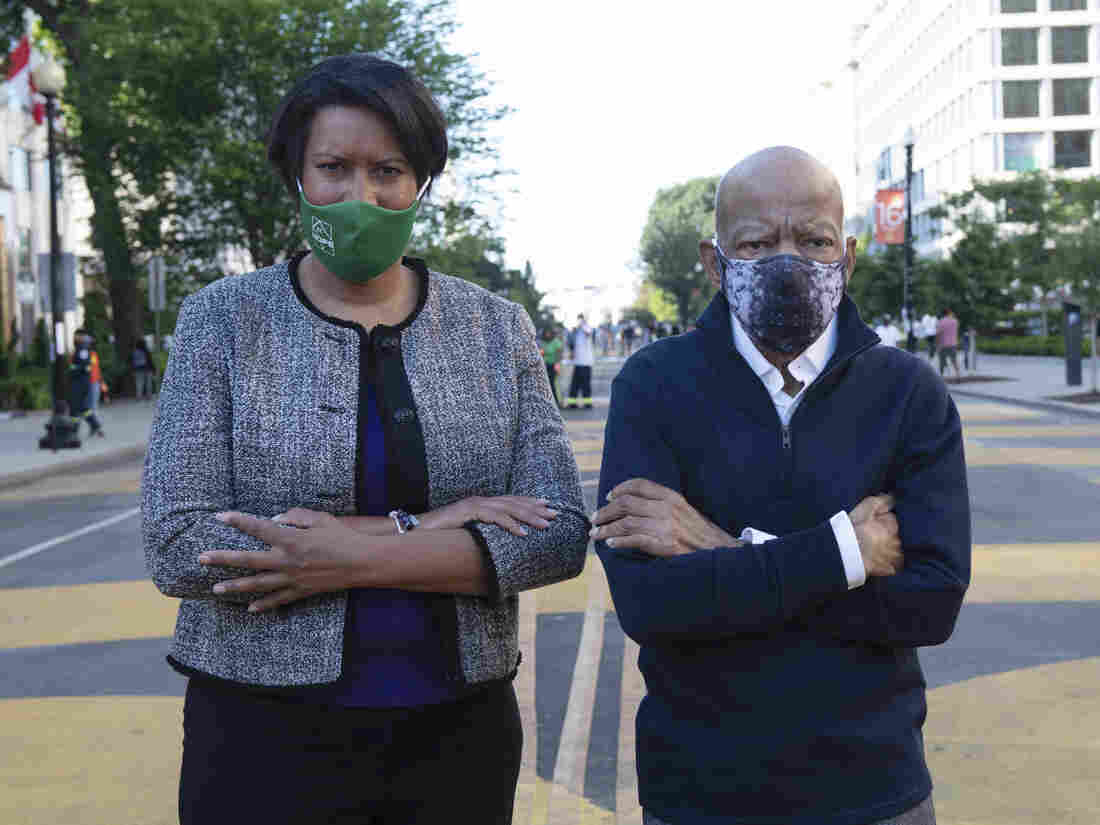 Washington, D.C., Mayor Muriel Bowser and Lewis look over a section of 16th Street renamed Black Lives Matter Plaza on June 7 in the nation's capital. It was the congressman's last public appearance. Khalid Naji-Allah/Executive Office of the District of Columbia Mayor via AP hide caption 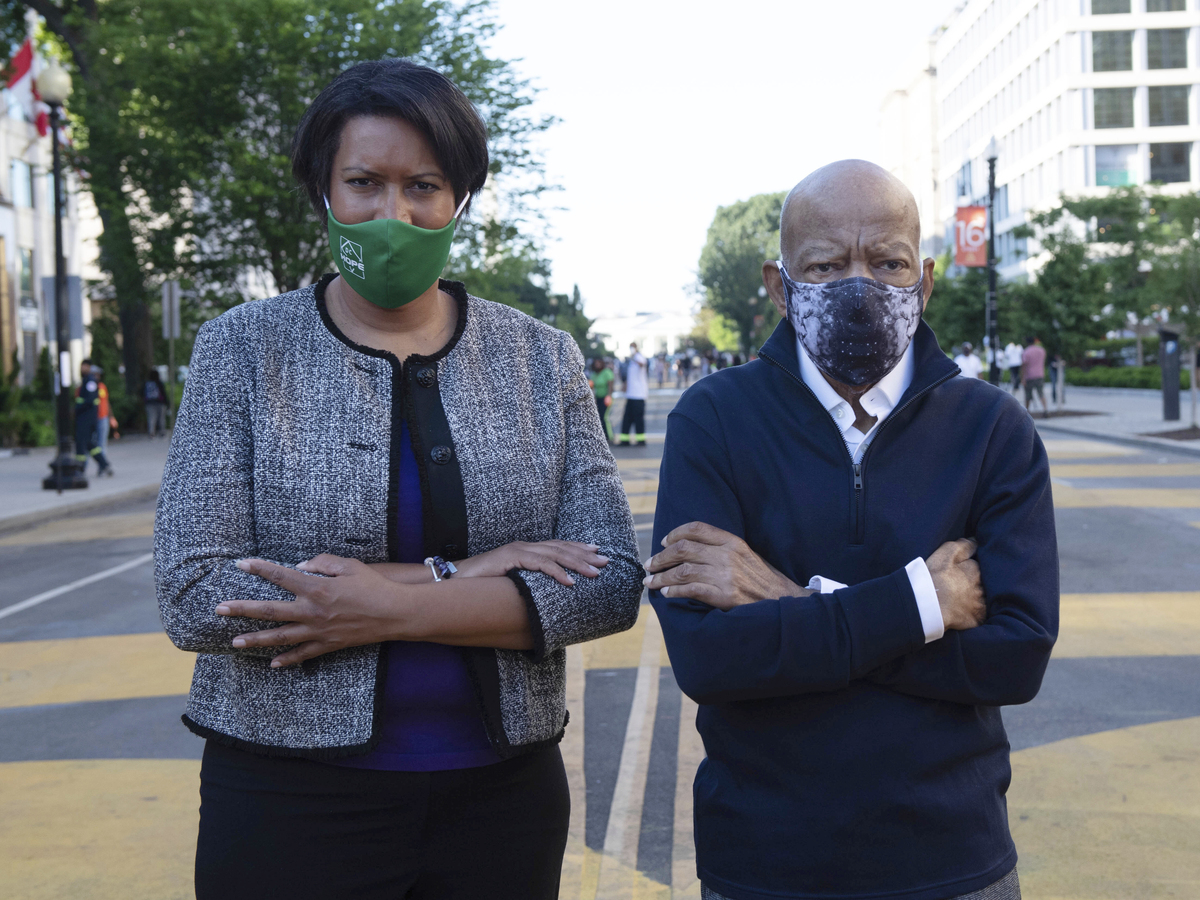 Washington, D.C., Mayor Muriel Bowser and Lewis look over a section of 16th Street renamed Black Lives Matter Plaza on June 7 in the nation's capital. It was the congressman's last public appearance.

"In our country's most trying moments, Congressman Lewis taught us the lesson of joyful, steadfast commitment to ideals bigger than one man or one movement," Kemp said, as Georgia Public Broadcasting reported. "As we mourn his passing, we should all recommit ourselves to the principles he fought for: our country's core foundation in liberty, freedom, and justice for all."

The Atlanta mayor remembered Lewis as always being available to his constituents.

"Although an Alabama legend, an Atlanta icon and an American hero, Congressman Lewis took time to let me know — to let all of us know — that we matter to him," Bottoms said, according to GPB.

Lewis also lay in state at the U.S. Capitol Rotunda, the first Black lawmaker to receive that honor. At a ceremony there on Monday, House Speaker Nancy Pelosi said her longtime colleague was respected by members on both sides of the aisle and in both chambers of Congress.

"We knew he always worked on the side of angels, and now we know that he is with them," Pelosi said.

On Sunday, Lewis made one final trip across the Edmund Pettus Bridge in Selma, Ala., where law enforcement attacked protesters in 1965 as they attempted to cross. That day has become known as "Bloody Sunday."

Lewis was badly beaten on that day 55 years ago, but on Sunday, Alabama state troopers saluted him as his casket made its way across the bridge, led by a trail of red rose petals.