Accessibility links
Covid-19 Makes 'Magic: The Gathering' Less Accessible Magic: The Gathering is a popular collectible card game that's been around for years. But it can be an expensive hobby, and it thrives on in-person play. The pandemic has knocked players for a loop.

In The Pandemic Era, This 'Gathering' Has Lost Some Of Its Magic

In The Pandemic Era, This 'Gathering' Has Lost Some Of Its Magic 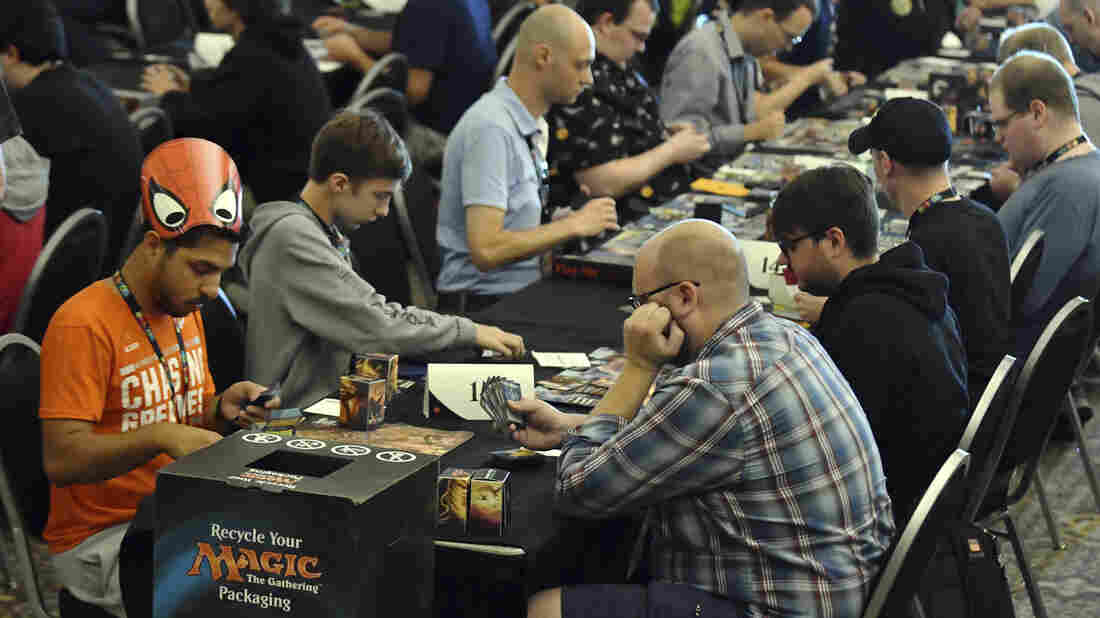 Players compete in a Magic: The Gathering tournament at Hasbro's HASCON in 2017. Josh Reynolds/AP hide caption 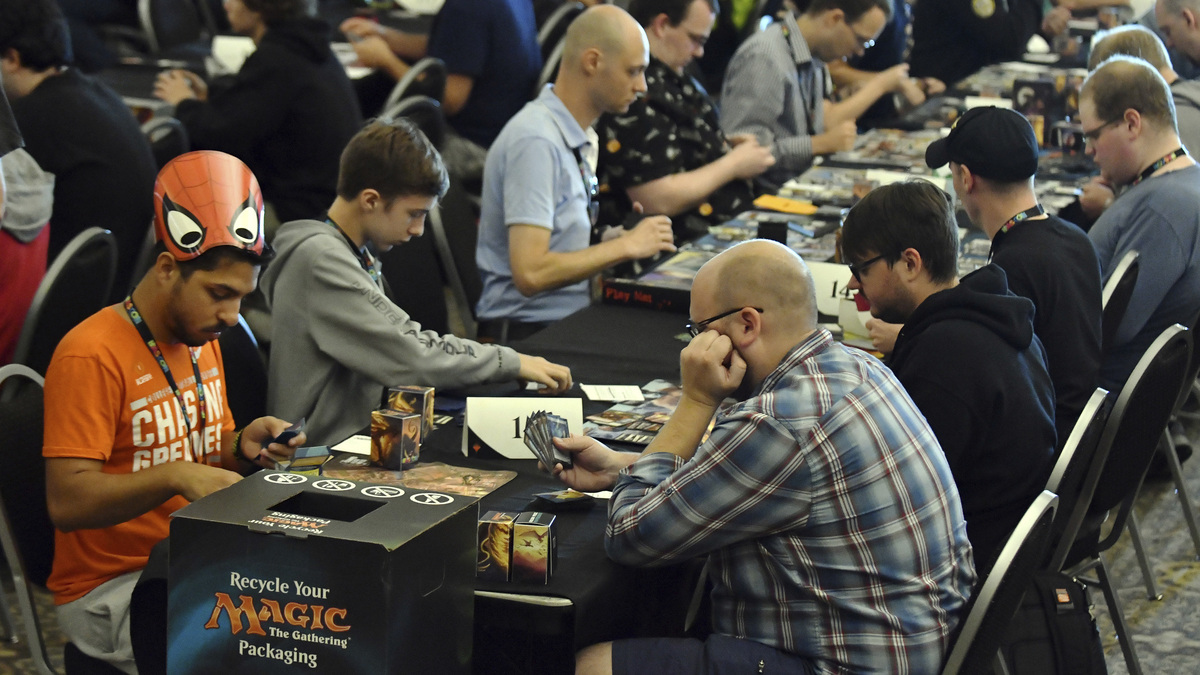 Players compete in a Magic: The Gathering tournament at Hasbro's HASCON in 2017.

You draw seven cards. You look at your hand. It would be perfect if you had that one card.

Too bad it costs $50. And your local game store is closed anyway.

Depending on where you lie on the nerd spectrum, you may or may not have heard of Magic: The Gathering. It's a trading card game that's been in production for almost three decades. Even if you haven't heard of it or played it, you probably know someone who has. It's one of the most popular trading card games of all time, and that isn't an exaggeration; there are millions of Magic: The Gathering players worldwide. 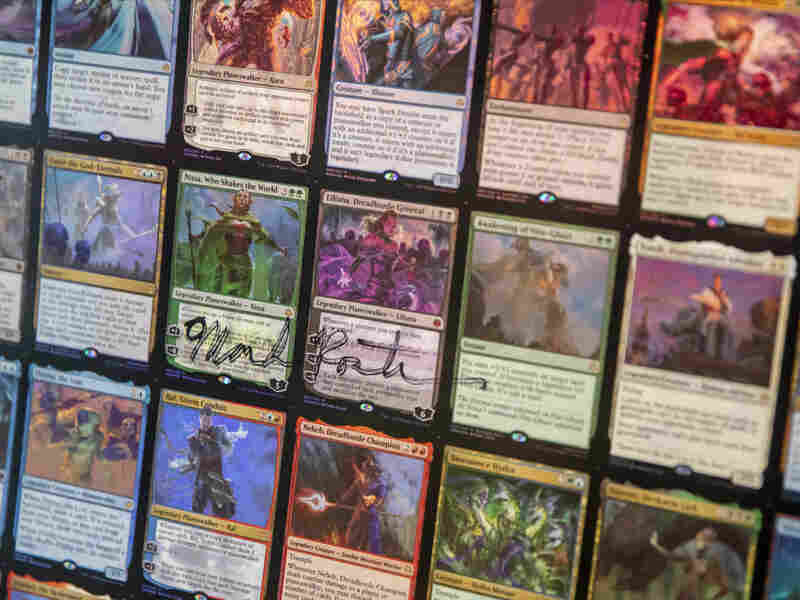 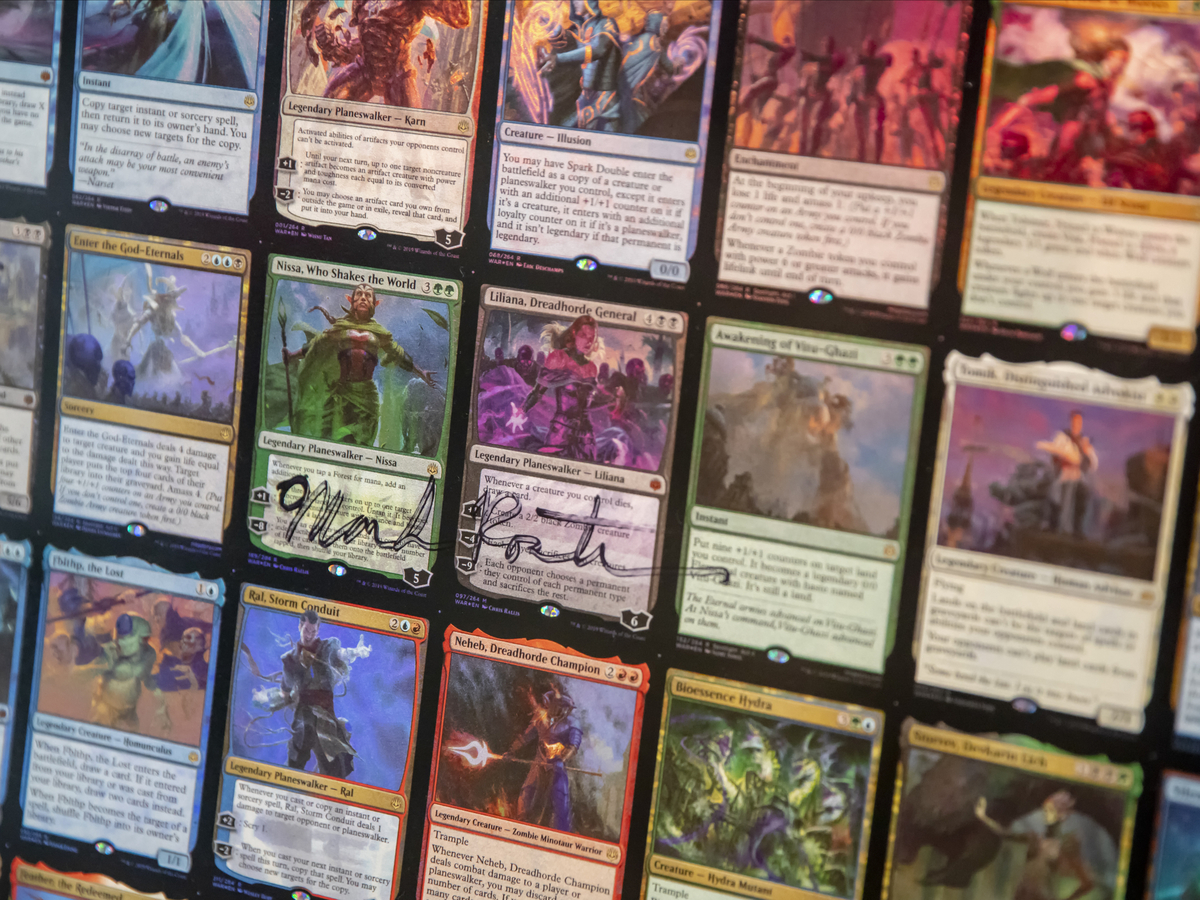 A full foil sheet of Magic: The Gathering cards, signed by game designer Mark Rosewater. Some rare cards can be extremely expensive.

Players — or Planeswalkers — control powerful spells in the form of a 60-card deck, intent on bringing down the opponent sitting across from them. It's a fantastical fusion of poker and chess: There's luck in the cards you draw, but it also takes a tremendous amount of strategy and guile to defeat a worthy foe.

It takes money, too.

Before COVID-19 hit the Magic community, players packed into local game stores to sling spells and blow off steam. Now, as players move toward the online versions, there are additional financial hurdles to clear.

There's a reason it's called Magic: The Gathering. Most of the fun comes from squaring off against other players, catching the clandestine tells of your opponent as they draw powerful spells. Game stores across the country offer opportunities to play; they host tournaments, stock up on new cards and teach new wizards how to play.

But even if veteran players and shop owners welcome new Planeswalkers with open arms, how accessible is Magic: The Gathering?

Episode 609: The Curse Of The Black Lotus

Players can craft a variety of decks, and if they're playing the more common formats of the game, a deck can cost anywhere from about $275 to $834 or more. Not only are full decks expensive, but so are individual cards. The card Thoughtseize, for instance, has a current value of around $25 per copy. If a deck contains four copies of a single card (the maximum), just that one card would bring the price of a deck up by $100. And there are much more expensive cards on the market.

Budding Planeswalkers face a financial dilemma: Spend more money on better cards like Thoughtseize, or lose to their opponents who may have spent thousands of dollars to improve their deck. Even local competitions with relatively inexperienced players see decks that hover around the price of the average American's monthly rent. And while the cost of entry into Magic: The Gathering may not be outrageous, the micro-armaments you build up can get pricey.

"When I got into Magic about five years ago, I needed money, time and someone to play with to help me figure everything out," says Enrique Ramos, a teacher in the Washington, D.C. area. He runs an afterschool program where he uses his own collection of Magic cards to welcome young wizards to the community.

As opposed to many video games or board games, a steady stream of money is needed to be considered relevant in the scene. For players interested in retaining any kind of competitive edge, one-time purchases are not enough.

"Money is the largest barrier, of course," he says. "As opposed to many video games or board games, a steady stream of money is needed to be considered relevant in the scene. For players interested in retaining any kind of competitive edge, one-time purchases are not enough."

For some, Magic is a form of income, not an expense. COVID-19 has changed that, too.

Professional players rely on tournaments to make a living. Magic pro Seth Manfield published a piece detailing how COVID-19 has changed the Magic community and his personal livelihood. "I didn't realize what the gig economy was, or that I was personally a part of it, until this pandemic started," he wrote. "Players take a hit from events being cancelled."

You might scoff at the idea of being a professional Magic player, but taking first place at the Magic: The Gathering Pro Tour, for instance, deposits a whopping $50,000 into a player's bank account — which definitely helps buy good cards.

Local game stores also depend on the profit from the gathering part of Magic — selling cards and hosting events is often an essential part of a store's business.

It's made us all very, very sad. Community is at the heart of our store and players are really missing the Gathering part.

"We used to run a lot of Magic events," says Kathleen Donahue, owner of Labyrinth Games & Puzzles in Washington, D.C. Donahue says her store lost about 10% of its Magic sales and 30% of its overall sales during the pandemic. "It's made us all very, very sad. Community is at the heart of our store and players are really missing the Gathering part."

There is an online version of the game, but Magic Online isn't cheap either. And while it isn't as expensive as its cardboard counterpart, a player still has to buy new digital versions of physical cards they already own. On top of that, a Magic Online account costs $10 just to set up. And while a Magic veteran might jump at the opportunity to play online, a new player may feel less inclined to pay the fee when there are other online deck-building games, like Hearthstone, that are free to try.

In 2018, Magic's publisher Wizards of the Coast released a free, digital version of the game called Magic: The Gathering Arena. It's a more kid-friendly online option for new Planeswalkers, but it still has the same Magic charm for older players. Arena does include in-game purchases, but players can obtain better cards by grinding out a lot of games instead of spending extra money. And while Arena can be a great way to introduce a new player to the online format, if they don't want to empty their wallets, they'll have to get used to losing for a while.

"Gathering" makes Magic a special hobby. Casual players want to get together and duel with their friends. Professionals want to spend hours preparing for a tournament, cementing themselves as Magic legends. And local game store owners want to be a welcoming place for new Planeswalkers. The problem with the game comes down to cost; if you want to keep up — especially during the COVID-19 era — you'll need money.

Keller Gordon is an administrative assistant at NPR Training. He mostly plays Modern format with a Grixis Death's Shadow deck. Find him on Twitter at @KelBot_.