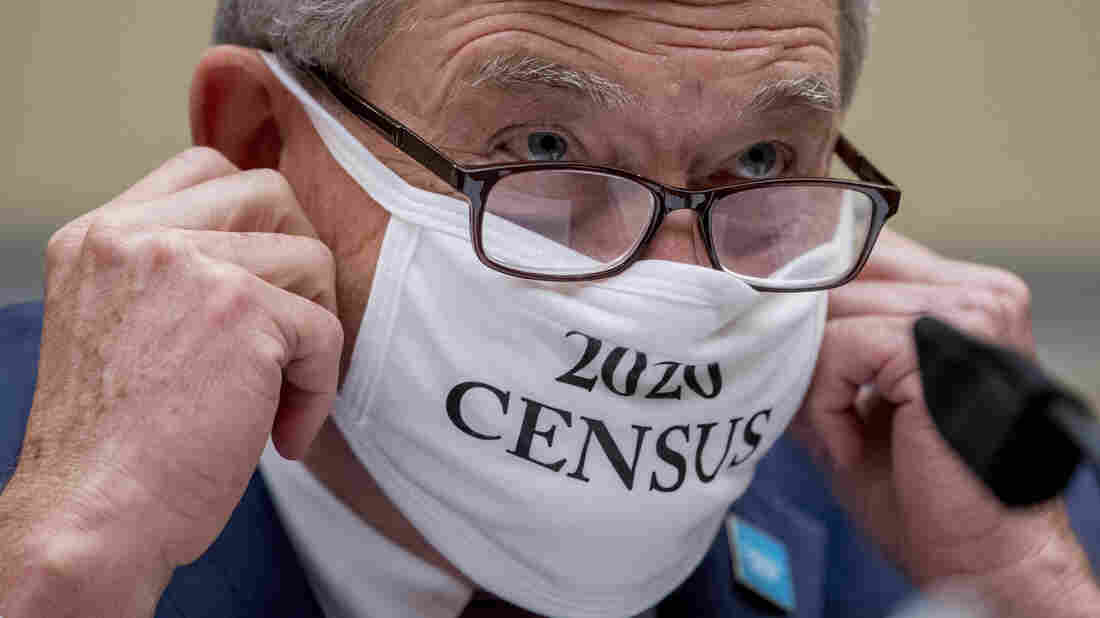 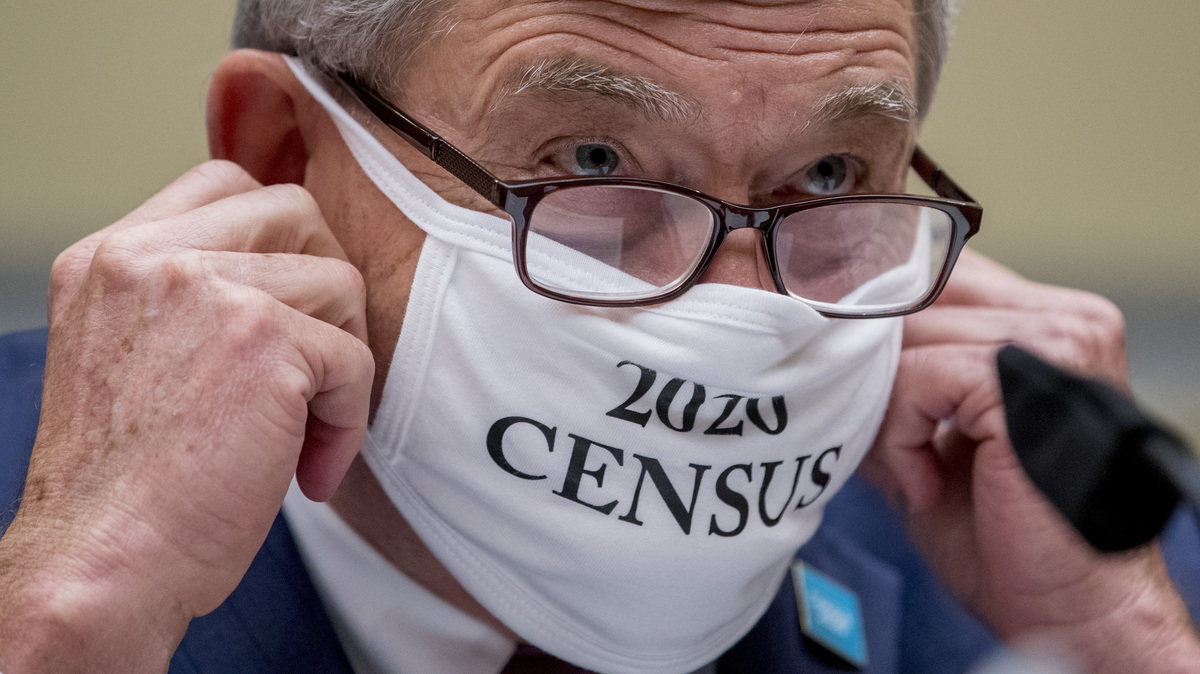 Census Bureau Director Steven Dillingham, wearing a face covering printed with the words "2020 Census," faced questions from lawmakers Wednesday on plans for finishing the count. NPR has learned the bureau recently decided to end door knocking on Sept. 30, increasing the risk of an undercount.

The Census Bureau is cutting short critical door-knocking efforts for the 2020 census amid growing concerns among Democrats in Congress that the White House is pressuring the bureau to wrap up counting soon for political gain, NPR has learned.

Attempts by the bureau's workers to conduct in-person interviews for the census will end on Sept. 30 — not Oct. 31, the end date it indicated in April would be necessary to count every person living in the U.S. given major setbacks from the coronavirus pandemic. Three Census Bureau employees, who were informed of the plans during separate internal meetings Thursday, confirmed the new end date with NPR. All of the employees spoke on the condition of anonymity out of fear of losing their jobs.

"It's going to be impossible to complete the count in time," said one of the bureau employees, an area manager who oversees local census offices. "I'm very fearful we're going to have a massive undercount."

Asked why and when the decision was made to move up the end of door knocking, the Census Bureau replied in a written statement Friday: "We are currently evaluating our operations to enable the Census Bureau to provide this data in the most expeditious manner and when those plans have been finalized we will make an announcement."

I'm very fearful we're going to have a massive undercount.

A Census Bureau area manager speaking on the condition of anonymity about how the new Sept. 30 end date for door knocking could affect the 2020 census

About 4 out of 10 households nationwide have still not participated in the constitutionally mandated count of every person living in the U.S., and self-response rates are even lower in many communities.

This month, the bureau began deploying door knockers to visit unresponsive homes in certain parts of the country. Door-knocking efforts are expected to roll out nationwide Aug. 11.

It's unclear how much longer households can submit census responses on their own by going online, over the phone and by mail. The bureau's website — which as recently as Thursday still listed Oct. 31 as the end of the "self-response phase" that began in March — now reads that phase will last until the end of field data collection.

The condensed door-knocking time frame increases the risk of leaving out many people of color, immigrants and other members of historically undercounted groups from numbers that are collected once a decade to determine each state's share of congressional seats, Electoral College votes and an estimated $1.5 trillion a year in federal tax dollars for Medicare, Medicaid and other public services.

Former Census Bureau Director John Thompson warns that with less time, the bureau would likely have to reduce the number of attempts door knockers would make to try to gather information in person. The agency may also have to rely more heavily on statistical methods to impute the data about people living in households they can't reach.

"The end result would be [overrepresentation] for the White non-Hispanic population and greater undercounts for all other populations including the traditionally hard-to-count," Thompson wrote in written testimony for a Wednesday hearing on the census before the House Oversight and Reform Committee.

This last-minute scheduling change to the largest and most expensive field operation for the 2020 census comes as the bureau has been publicly sending mixed signals about its plans for finishing the count.

In April, Commerce Secretary Wilbur Ross, a Trump appointee who oversees the bureau, asked Congress to extend the legal deadlines for reporting census results because the bureau said it needed extra time to complete the national head count during the coronavirus pandemic.

Later that same day, President Trump suggested that Congress did not have a choice in approving the deadline extensions in light of the pandemic.

So far, only Democrats have introduced legislation that would grant the bureau's request.

On Wednesday, the bureau quietly updated its website and removed a key reference to Oct. 31, the previously announced end date for conducting follow-up visits. The bureau's website now says it is "working to complete data collection as soon as possible, as it strives to comply with the law and statutory deadlines."

Arturo Vargas — CEO of the National Association of Latino Elected and Appointed Officials Educational Fund, which is helping to promote census participation — called the update "alarming."

"We are concerned over what seems to be an abandonment of the request for the additional time that both the White House and Census Bureau have already acknowledged is required for a full and accurate census," Vargas said in a statement. "It is too late now for the Bureau to change course, and the next COVID-19 relief legislation should reflect that reality."

The White House, according to the bureau's updated webpage, did ask for an additional $1 billion to fund "accelerated efforts" for completing counting "as quickly, and safely as possible." In their proposal for relief aid released on Monday, Republicans in Congress offered less than half of that amount with no deadline extensions.

That date doesn't mean anything to me after today.

A Census Bureau official speaking on the condition of anonymity about the previously announced Oct. 31 end date for 2020 census door knocking

During a hearing Wednesday before the House Oversight and Reform Committee, Steven Dillingham — the bureau's director and a Trump appointee — gave lawmakers little insight into why the timing change was made.

But Dillingham did not answer the questions.

Asked by Rep. John Sarbanes, D-Md., if he was aware that the Trump administration reportedly wants to wrap up counting quickly so that the president can receive the census apportionment numbers by the end of the year, Dillingham replied: "I'm not aware of all the many reasons except to say that the Census Bureau and others really want us to proceed as rapidly as possible."

But top career officials at the bureau — including Tim Olson, the associate director for field operations — have publicly warned since May that the agency can no longer meet the current deadlines.

Pressed by Rep. Rashida Tlaib, D-Mich., Dillingham said he "can't agree" with Olson's assessment, noting the bureau has "many more assessments ahead of us here."

"President Trump and Mitch McConnell are demanding the American people finance their political manipulation of our democracy," Rep. Carolyn Maloney, D-N.Y., chair of the Oversight and Reform Committee, said in a statement after the hearing. "Rushing the census to completion means that census workers will not have enough time to follow up on the non-responses, an essential operation designed to find and count the hardest to reach communities."

The office of Senate Majority Leader Mitch McConnell, R-Ky., and the White House press office have not responded to NPR's requests for comment.

The pandemic has forced the bureau to scramble to find alternative locations for onboarding newly hired census workers, and the bureau is expecting public health concerns to increase the number of people who don't show up to be trained or to work.

Moving up the end date from Oct. 31 for door knocking is likely to throw the census, already upended by months of delays, deeper into turmoil as hundreds of thousands of the bureau's door knockers try to figure out how to conduct in-person interviews as many states grapple with growing coronavirus outbreaks in the middle of hurricane season.

"That date doesn't mean anything to me after today," a Census Bureau official told NPR on Wednesday, speaking on the condition of anonymity out of fear of retaliation from superiors for speaking out.

"It's embarrassing because we have been discussing this in presentations and conversations with staff," the official added. "I'm hurt that they 'suddenly' changed their minds."

News about the Sept. 30 end date for door knocking apparently had not reached all of the bureau's staff by Thursday morning when Jeff Behler, director for the bureau's New York regional office, said during a press briefing that local census offices in New England, New York, New Jersey and Puerto Rico were still scheduled to continue visiting unresponsive households through the end of October.

Your name will go down in history if this is the worst census ever conducted by the United States government.

"Are we doing anything to accelerate?" Behler said during the briefing organized by the Association for a Better New York. "I would say, not really."

On Wednesday, during a hearing full of nonanswers and roundabout responses to lawmakers' questions, Dillingham did appear certain about at least one topic.

The director of the Census Bureau testified that he first learned about Trump's plans to attempt to exclude unauthorized immigrants from the census numbers used to reapportion seats in Congress not from any internal discussions, but from a news report "late on a Friday" that said "such a directive may be coming down."

"I will swear to it all day long under oath," Dillingham said after Rep. Debbie Wasserman Schultz, D-Fla., looking incredulous in a remote video feed, reminded him that he was testifying under oath.

Gomez, another House member who joined the hearing remotely to question Dillingham, left the bureau's director with a stern warning before stepping away from the camera.

"It seems like there's an obvious pattern that you're not in control of the Census Bureau," Gomez said. "Your name will go down in history if this is the worst census ever conducted by the United States government. You're not going to run away and say that this was only because of the Trump administration later on. You will be responsible."