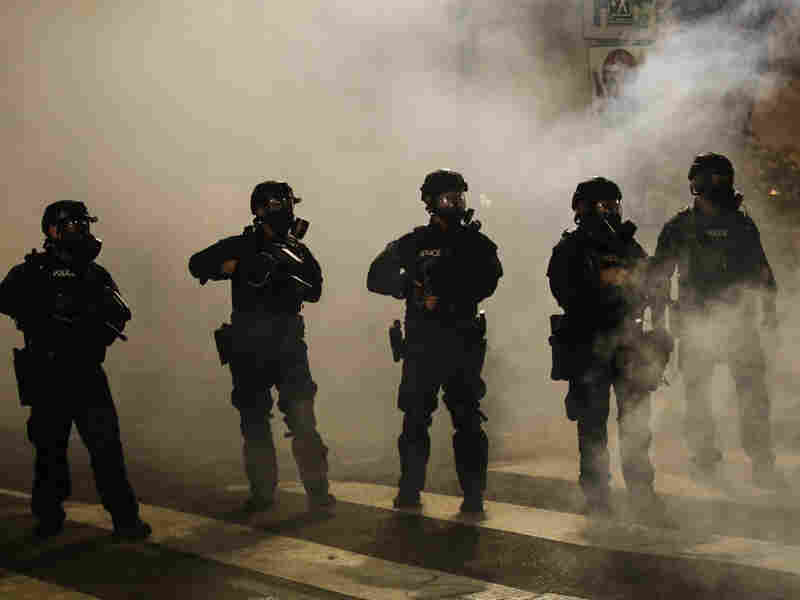 Federal officers are surrounded by smoke as they push back demonstrators during a Black Lives Matter protest at the Mark O. Hatfield United States Courthouse on Wednesday in Portland, Ore. Marcio Jose Sanchez/AP hide caption 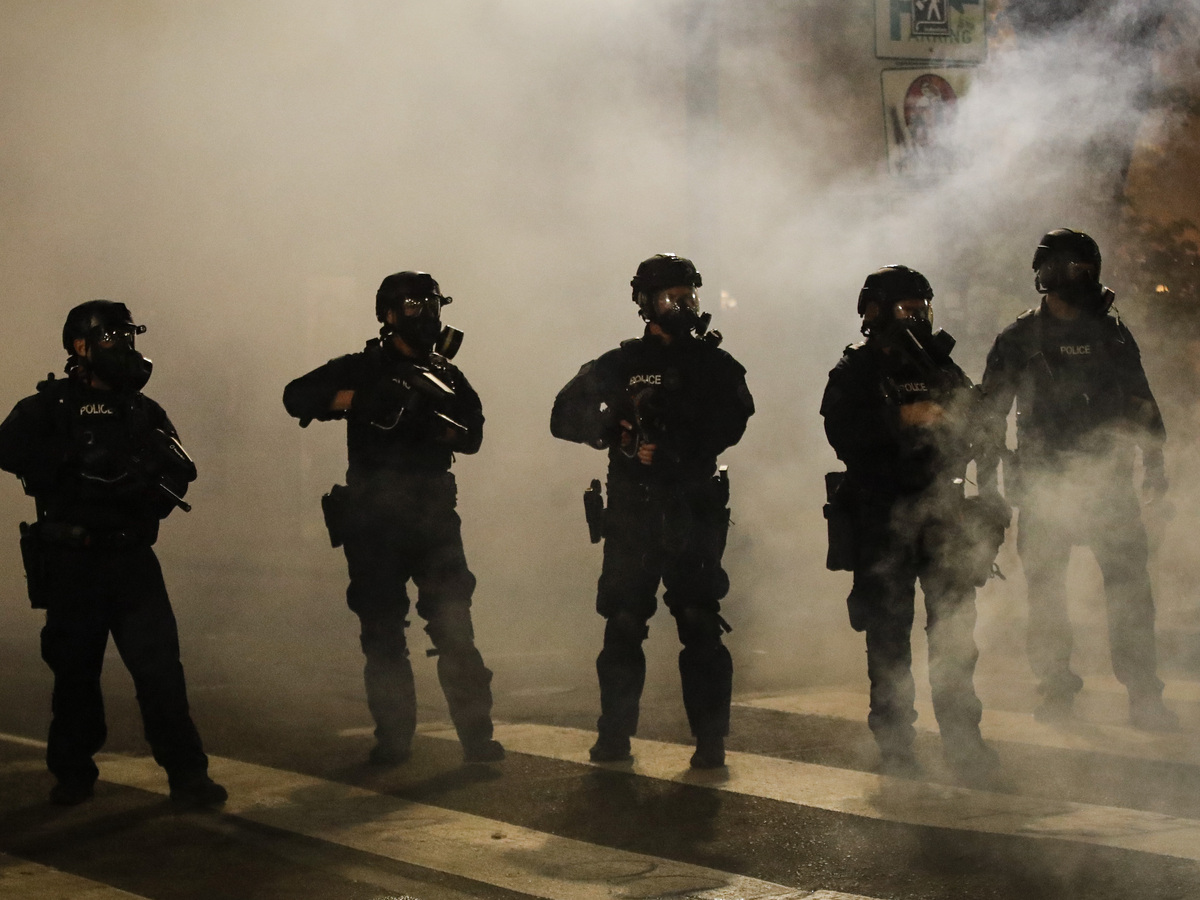 Federal officers are surrounded by smoke as they push back demonstrators during a Black Lives Matter protest at the Mark O. Hatfield United States Courthouse on Wednesday in Portland, Ore.

At a congressional hearing this month, extremism researcher J.J. MacNab delivered a warning: "There is a potential street war brewing."

MacNab cited the dangerous mix of armed factions squaring off at protests around the United States. Of all the current flashpoints for violence — the pandemic, the election, the economy — she called it the risk that worries her most.

"I am concerned that there will be a shootout at one or more of the Black Lives Matter protests," MacNab told House members. "There are too many guns at these events, held by too many groups with conflicting goals."

Nine days later, MacNab's grim prediction came true. Last weekend, at least five protesters were shot at protests in different cities. In Austin, Texas, police say a protester with a rifle was shot and killed by a man driving through the crowd. A similar scene unfolded in Aurora, Colorado. Local news reports say a protester fired a gun, apparently aiming for a car plowing through the crowd but instead hitting two other protesters.

In Eugene, Ore., a protester and a man driving through the crowd both pulled guns. A viral video shows the men inches apart, each with a gun pointed directly at the other in a tense standoff. It ended without a shot fired, and the crowd cheered as the man in the truck drove away. But next time, extremism researchers fear, they might not be so lucky.

In recent weeks, street clashes have involved combinations of protesters, police, federal forces, extremists and provocateurs. The disparate armed factions, plus the stressors of the pandemic and a looming election, lead terrorism analysts to predict that worse is still to come.

"I think we are coming into very dangerous waters over the next couple of months," said Seth Jones of the Center for Strategic and International Studies. "This has the potential for larger numbers and amounts of street violence between groups and networks on opposing sides. This is serious. I haven't seen this kind of domestic terrorism threat, really, in my lifetime."

Analysts say far-right and anti-government agitators are either attacking protesters or trying to glom onto their cause to push their own agendas. Other extremists see a chance to trigger a violent revolution; still others, a race war. Meanwhile, guns are increasingly visible on the protesters' side too. Some armed anti-fascist groups and Black gun clubs have joined the fray as self-proclaimed community defense forces.

In heated exchanges at a hearing this week, House Democrats accused Attorney General William Barr of ignoring the far-right threat. Like President Trump, Barr blames the violence at protests on armed anarchists and other leftist radicals. Barr told lawmakers that peaceful protests over racial inequality have been "hijacked."

Barr also defended the deployment of federal forces, a move that has been widely criticized as an unnecessary addition to an already combustible mix. Just as negotiations were underway to remove the federal forces from the streets of Portland, a new video surfaced of New York police bundling a protester into an unmarked van — a tactic used by the federal officers.

"This becomes very dangerous in who is being read as an enemy, who is read as engaged in criminal activity, and when the federal government can use its considerable power to shut down public dissent," said Ashley Howard, an assistant professor of history and African American studies at the University of Iowa.

Howard has written extensively about political violence and civil rights rebellions. She said protests in the 1960s also drew an extreme backlash. But now, with the organizing power of social media and guns in so many hands, this era is different. Howard said it has changed the way she thinks about protesting.

"I, for so long, have taken for granted what protesting in this country meant. That you could go out and come home that night," she said. "And I think now this is changed. You could get hit by a car. You could get a rubber bullet to the face. You could be shot by someone who's trying to protect you."

Howard said that's what makes the sustained demonstrations remarkable. Protesters have seen the beatings and car rammings. And yet, she said, they keep coming out.

"That makes the stakes so much higher to protest, but I think that also demonstrates how the stakes have already been high," Howard said. "That people are willing to put their lives on the line to finally get a freer kind of freedom in this country."