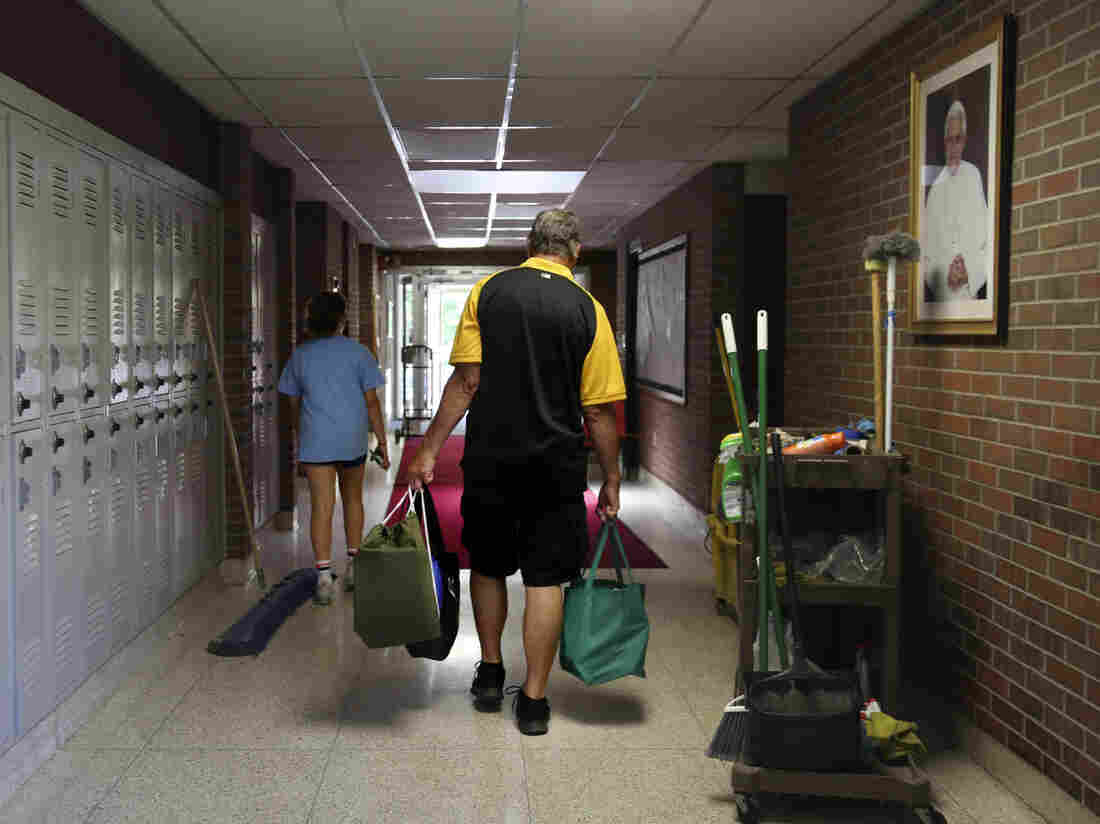 Cesa Pusateri, 12, and her grandfather, Timothy Waxenfelter, principal of Quigley Catholic High School, leave with his collection of speech and debate books after the closure of the school in Baden, Pa., on June 8, 2020. According to the National Catholic Educational Association, at least 100 schools have announced in recent weeks that they won't reopen this fall. Jessie Wardarski/AP hide caption 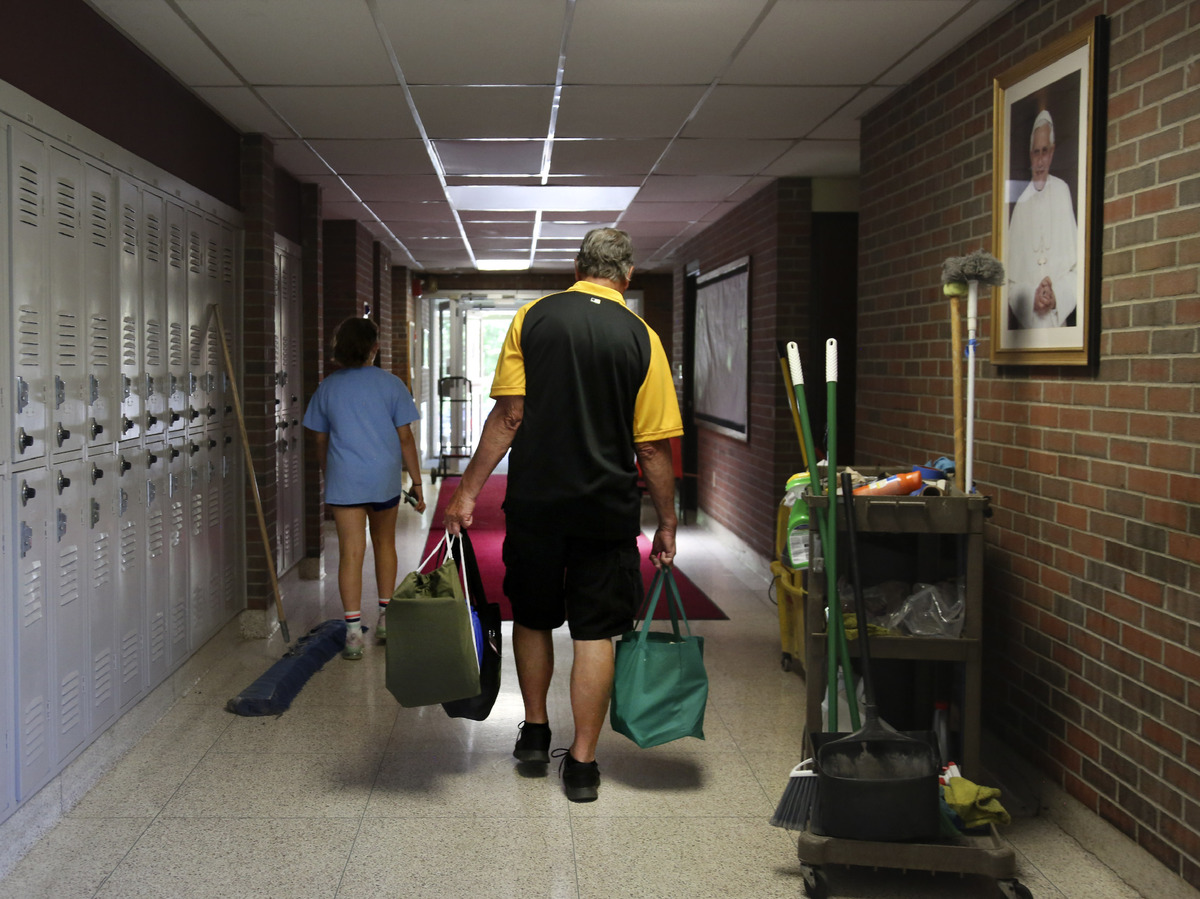 Cesa Pusateri, 12, and her grandfather, Timothy Waxenfelter, principal of Quigley Catholic High School, leave with his collection of speech and debate books after the closure of the school in Baden, Pa., on June 8, 2020. According to the National Catholic Educational Association, at least 100 schools have announced in recent weeks that they won't reopen this fall.

Catholic schools in urban neighborhoods, often seen as an attractive option by low income parents and families of color, are facing an unprecedented crisis as a result of the COVID-19 pandemic.

Across the country, at least 100 urban Catholic schools will close in the fall as a result of declining tuition revenue, and school administrators say the number could double in the next two months.

The economic downturn caused by the pandemic is leading to widespread unemployment, and with the subsequent income loss many parents are concluding they can no longer afford Catholic school tuition fees. The more families pull their children out of Catholic schools, the more likely those schools will have to close.

"If the school had a lot of low income families in it, [it] got hit really hard," says Tom Carroll, superintendent of Catholic schools in the archdiocese of Boston, where nine are due to close. "For those schools that were already on the edge, it just put them over."

Typically, about 80% of a Catholic school budget depends on tuition revenue, according to Mary Pat Donoghue, director of the Secretariat for Catholic Education at the U.S. Conference of Catholic Bishops.

"The remaining 20% is made up from fundraisers and donations," Donoghue says, "and all of those sectors have been negatively affected." A local Catholic parish may also subsidize an affiliated school, but those subsidies are funded by weekly collections at mass, and services in most Catholic churches have been suspended since March.

In Richmond, Calif., the principal of St. Cornelius Catholic School announced on July 6 that the 72-year-old school would be closing, leaving Mirna Antolin and other parents completely unprepared.

"For me, it's horrible," Antolin says. Her daughter was preparing to enter seventh grade at St. Cornelius, and her son was bound for kindergarten. She could send them to another Catholic school in the area, but they all charge much higher tuition, more than she can afford on her salary as a nurse's assistant at a San Francisco hospital. She is now thinking she will send her son to public school and focus on finding a place for her daughter.

"I'm trying to squeeze some numbers," Antolin says. "Maybe I would have to do a little bit of overtime at work to be able to afford it. I don't want to put my daughter in public school, because she's been in a Catholic school all her life."

For many low income families, however, those urban schools remained important.

Richmond, Calif., has been plagued for years by a high crime rate, and parents such as Mirna Antolin viewed the local Catholic school as an attractive alternative.

"St. Cornelius to me was a safe environment, educational for my kids," she says. "[When] I'm at work, I've felt safe about leaving them there."

With Catholic schools in the poorest communities most likely to be affected by the economic downturn, low income parents and families of color are especially hard hit. Nationwide, students of color make up approximately 20% of the enrollment in Catholic schools, according to the National Catholic Educational Association.

"[These schools] don't just serve the students' academic needs," Porter-Magee says. "They're often serving the social emotional needs. They're often providing a social safety net. They're helping support families. The closing of these schools, particularly those that serve marginalized or disadvantaged communities, is devastating."

One of the urban areas hardest hit by Catholic school closings is the archdiocese of New York, where at least 20 will be shutting down, six of them in the Bronx alone. Archbishop Timothy Cardinal Dolan this week urged Catholic families to contact their elected officials to push to have Catholic schools included in proposed federal pandemic aid.

Catholic officials fear the situation with their schools could well get worse.

"We could be closing schools in September," says Carroll, the Boston Catholic schools superintendent.

"Somebody could have put down a deposit to hold a place in the school or signed a tuition contract, thinking they had a job," Carroll says. "Then, all of a sudden one of the spouses doesn't have a job anymore. Then they sit around the kitchen table and say, 'We can't pay our bills.'"

"If you've got two or three kids in Catholic schools, [you say], 'We can't take the risk of spending the money.' So I think there's a second wave coming that's going to hit us in the fall."

Beyond the nine schools already closing in the Boston archdiocese, 24 more are on a "watch list," Carroll says.

"This is what I wake up in the middle of the night thinking about," he says. "It's really hard to predict how this is going to play out. But I do know that all the indicators are negative. There are no positive indicators."

All the Catholic schools in the Boston archdiocese received funding under the federal government's Paycheck Protection Program last spring, Carroll says, but that money is running out.