Accessibility links
'Unspeakable Acts' Showcases True Crime Stories And The Obsession With Them The search for answers in this nonfiction anthology edited by Sarah Weinman is one of many cohesive elements that make the collection land among the best true crime books of the year. 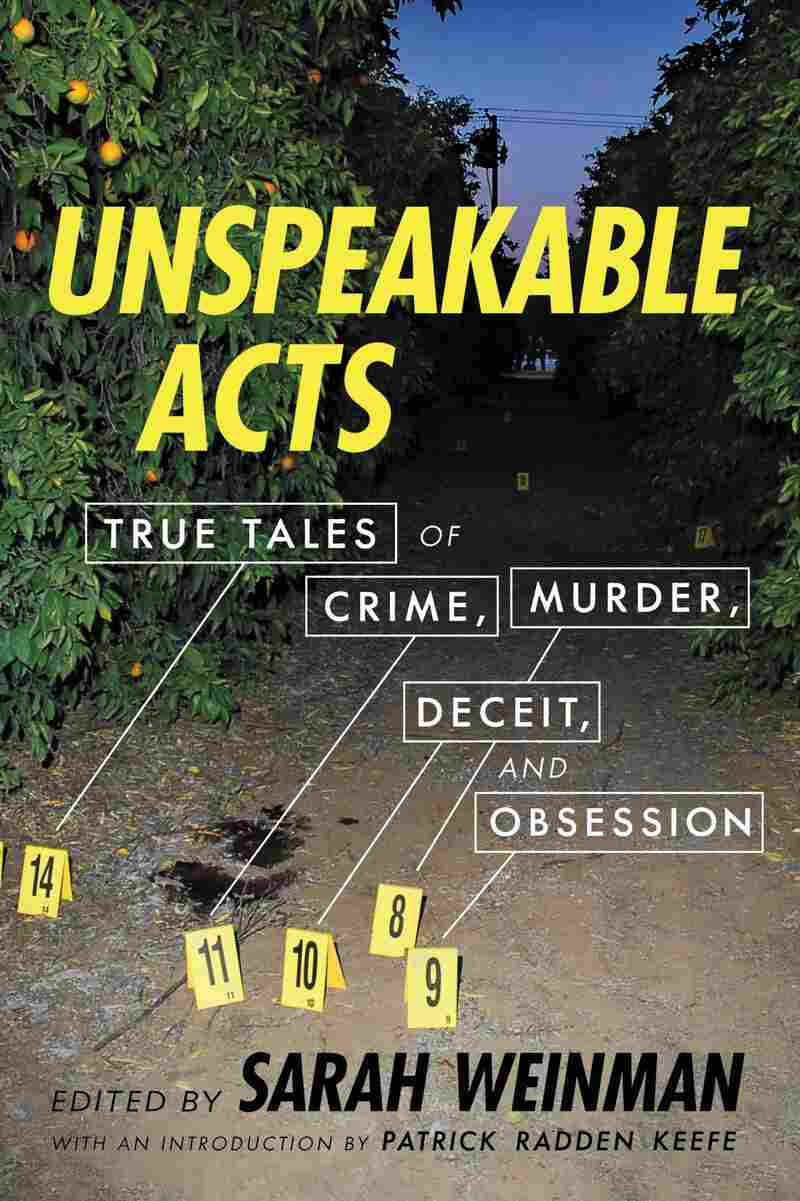 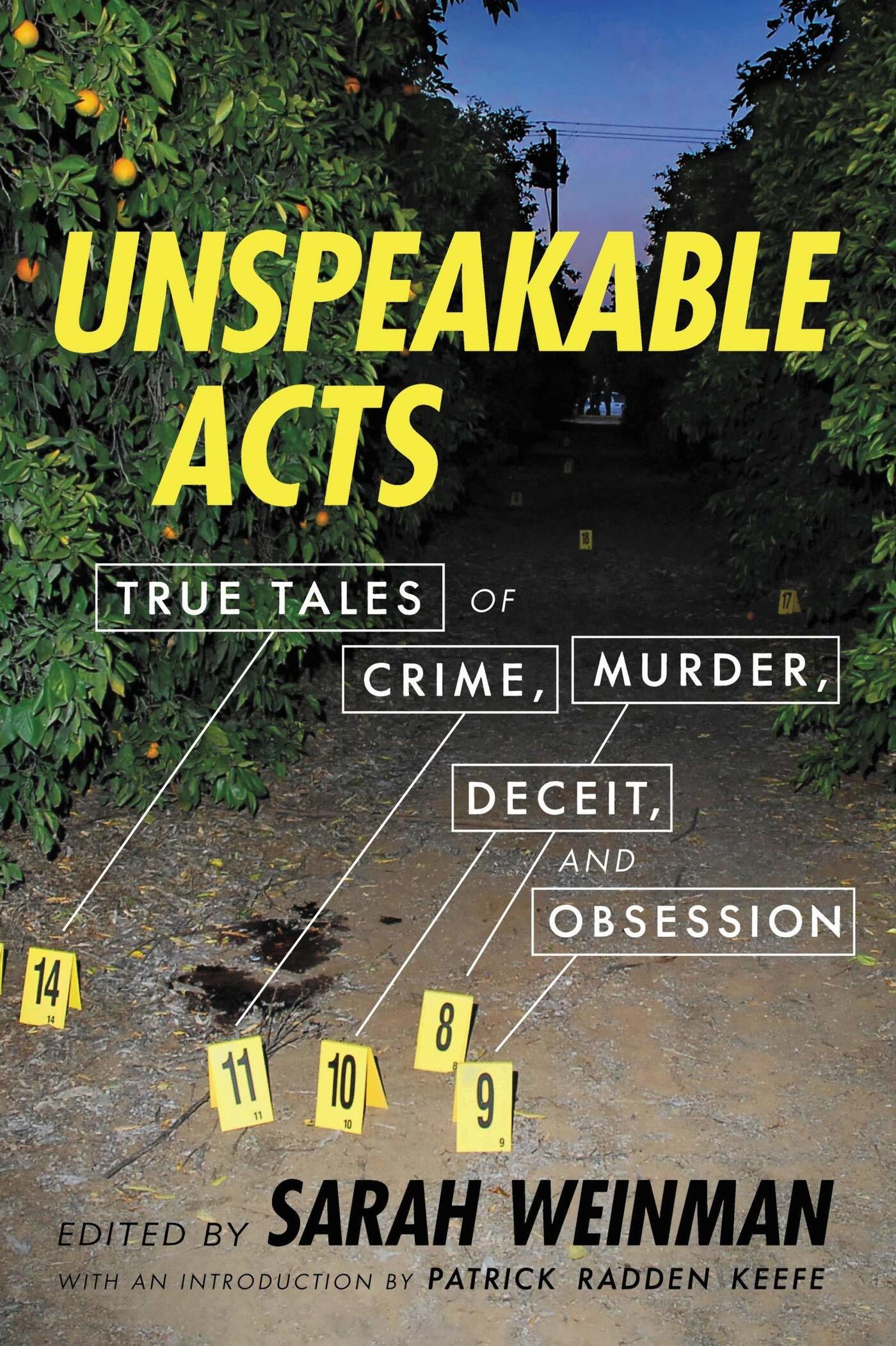 Unspeakable Acts, edited by author, editor and critic Sarah Weinman, works as both a superb collection of true crime writing and a text that looks at the nuances of our collective obsession with horrific murders, con men and serial killers in a historical and cultural context.

Those looking for titillating, gruesome chronicles of human depravity will find much to like here — and those who want great, smart writing and outstanding research that unveils things we would rather not look at under a microscope will be equally satisfied.

That Unspeakable Acts is more than a collection of true crime stories is clear from the introduction, where Weinman states:

"The fascination with murder and illegality is a perennial one, because the shock of the deed creates a schism between order and chaos. We wish for justice, but even when we get it, the result rings somewhat hollow."

In the pages that follow, the search for answers is one of many cohesive elements that make this nonfiction anthology one of the best true crime books of the year. The other three main elements — great writing, meticulous research and fearless engagement with the psychological, cultural and emotional aftermaths of extreme violence and murder — make this anthology inhabit an interstitial space between personal writing and academic analysis.

There are recent cases here, like that of Dee Dee and Gypsy Rose Blanchard, a mother-daughter duo that lied about Gypsy's health issues for years and tricked a lot of people in the process before it all ended in murder (Gypsy pled guilty to second-degree murder and was sentenced to 10 years in prison in 2016). There are also older cases. For example, one of the standouts in the book is Sarah Marshall's "The End of Evil," which takes a personal look at Ted Bundy through the lens of a woman who wants to understand the serial killer and looks for answers while deconstruction psychological profiling as well as psychopathy as something that equals "pure evil."

Another highlight is Alex Mar's "Out Came the Girls: Adolescent Girlhood, the Occult, and the Slender Man Phenomenon." Originally published in the Virginia Quarterly Review in 2017, this essay deserves its own review. It looks at the Slender Man stabbings of 2014, when Anissa Weier and Morgan Geyser, two 12-year-old girls, lured a friend into the woods and stabbed her 19 times. While Mar explores the myths and evidence of the case, she also focuses on how adolescence is a strange time for girls and how psychological, emotional and physical changes affect young women in various ways. Her writing on this is sharp and noteworthy:

"To be an adolescent girl is, for many, to view yourself as desperately set apart, powerfully misunderstood. A special alien, terrible and extraordinary. The flood of new hormones, shot from the glands into the bloodstream; the first charged touches, with a boy or a girl; the first years of bleeding in secret; the startling feeling that your body is suddenly hard to contain and, by extension, so are you."

While Unspeakable Acts is informative and engaging, it is also a wonderfully uncomfortable read because it brings real horror to your doorstep — it brings evidence that shows your neighbor could be a killer, your friends can stab you, and your partner could have a different name and another family or partner elsewhere. In Karen K. Ho's "Jennifer Pan's Revenge," parental pressure leads to chaos and murder. In Rachel Monroe's "The Perfect Man Who Wasn't," we are shown how con men can weasel their way into the lives of people and win over their trust, and their hearts, while draining their bank accounts and racking up credit card debt. These stories reveal the possible presence of the terrifying in everyday life and illuminate a devastating truth: Dark deeds are done not by monsters, but by people who look like everyone you know.

Alice Bolin echoes Weinman's thoughts in the first paragraph of "The Ethical Dilemma of Highbrow True Crime" when she says, "People love true stories about murder and other brands of brutality and grift, and they have gorged on them particularly since the beginning of modern journalism." Bolin explores the aesthetic differences between highbrow and lowbrow true-crime programs and documentaries, revealing in the process how voyeurism plays a huge role in the popularity of the genre today.

From classics of true-crime reporting to newer pieces that redefine the genre, Unspeakable Acts offers more than 400 pages of unnerving, immersive true-crime writing from some of the most talented writers in the field. There is plenty of blood and viciousness in its pages, but there are also heavy doses of hope and heart, of humanity and searching for answers. Yes, this is creepy and pulpy at times, but it ultimately morphs into a mirror that shows us scary things — and uncovers why we are drawn to them so strongly.